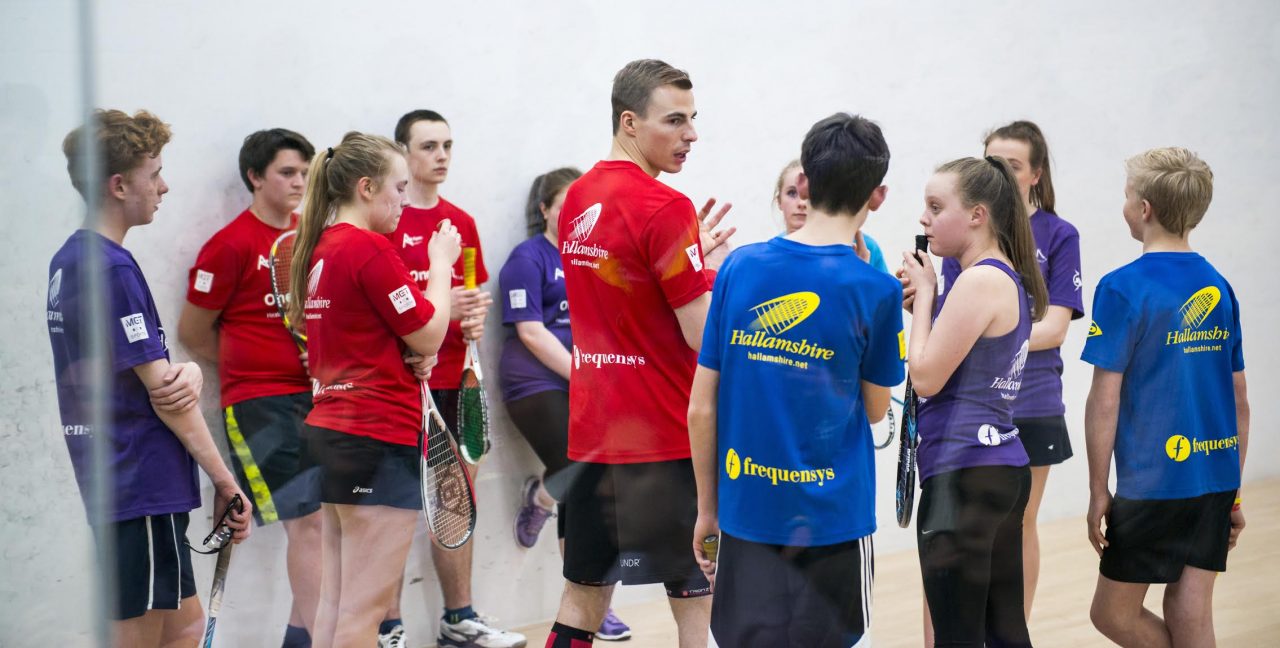 Nick Matthew is getting ready for a busy summer, preparing to star on stage at the Dubai Opera House and launching a new series of coaching camps in the UK in addition to his partnership with Millbrook School in America.

After reaching the semi-finals of the Grasshopper Cup, where he watched spellbound as fellow veteran Gregory Gaultier won his fifth major title in succession, Matthew has been enjoying a more relaxing time enjoying an exhibition series with Australian Cam Pilley.

I caught up with Nick as he enjoyed a break between the exhibitions.

1: How did you enjoy the Grasshopper Cup tournament in Zurich?
A: We are fortunate enough to have so many world class events on the PSA World Tour these days but without doubt the Grasshopper Cup was the most professionally run event I’ve been to in a number of years. The crowd created a fantastic atmosphere every day and it was a thrill to visit a new tour stop for me. Zurich is a great city.

2: Gregory Gaultier is two years younger than you and appears to be playing the best squash of his career. How would you describe his game at the moment? Are there any subtle changes that have helped him to play at such a consistently high standard for these past few months?

A: Yes it’s both brilliant to watch Greg doing his thing at the moment and frustrating in equal measures. He is a good friend so if it can’t be me I’m happy it’s him sort of thing, but I wish I could move like that! But then I never have so I guess age has nothing to do with it.

He seems such at ease with himself as a person and as a player and his game is reflecting that. He is obviously in a great spot both mentally and physically and the momentum is certainly with him. Some of his performances have left me in awe. 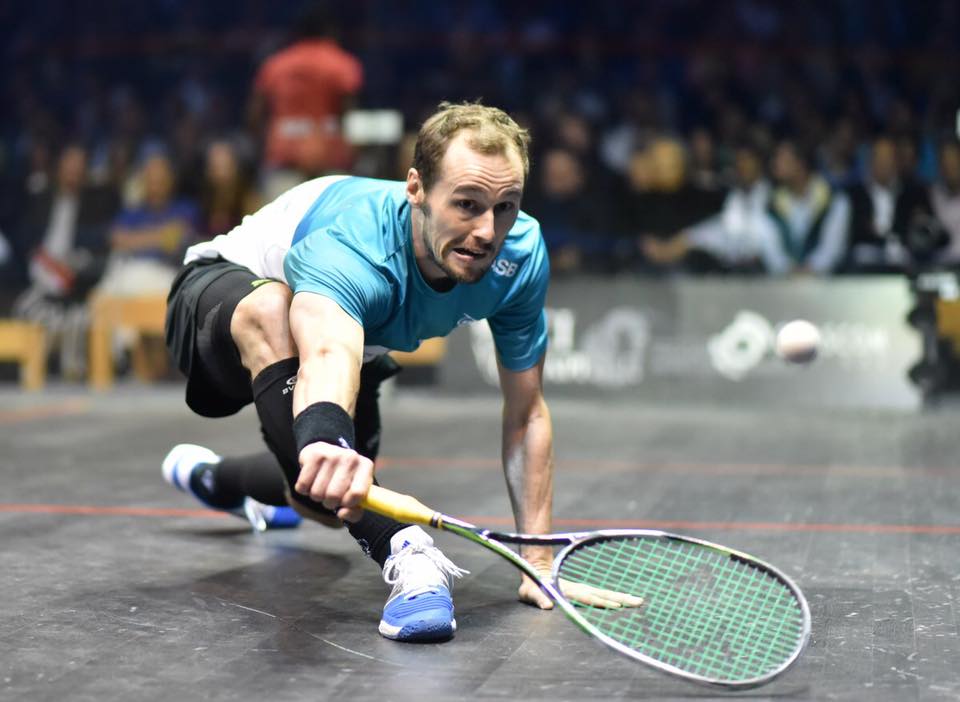 Gregory Gaultier has been in outstanding form recently

3: When you analyse nuggets of information like this, is it helping you to build a coaching plan built around them?

A: Obviously when someone is playing that well and taking everyone apart it definitely makes you look in even more detail about what you can do to halt it and design some training sessions around that (more of that below).

Having said that more than anything it just inspires you to focus on your own game and raise that to new levels. Both of these things are something that has happened with Ramy, James, Mohamed and Shabana over the years and it’s Greg’s turn to motivate the pack now.

4: How will you be preparing for the forthcoming World Series Finals in Dubai?

A: The key at the latter part of the season is getting the balance between rest and match fitness so you are ready in battle. It is a long season and a lot of work has been done so it’s a case of topping up and really getting sharp especially for the best of threes.

Matches are harder to come by at this stage of the season as the major tournaments are finished and some players take holidays so I have a few leagues and exhibitions to help me stay match fit.

5: What are your thoughts on playing in the Dubai Opera House?

A: Dubai came a little early for me in my recovery from my ankle injury last year and whilst I thoroughly enjoyed the event I underperformed on court. This year it promises to be an even more spectacular event especially with the new venue so I am desperate to play well and finish a great season for me on a high. 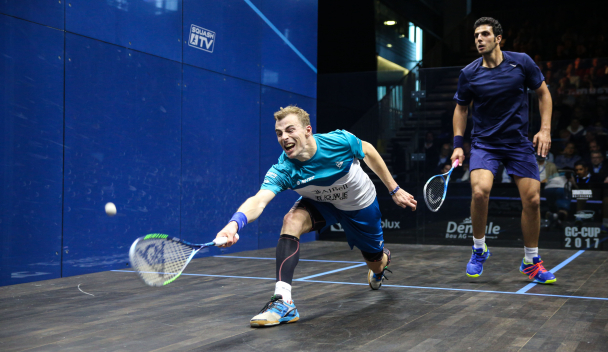 Nick Matthew in action in Zurich against Omar Mosaad

6: Please tell us about the forthcoming UK dates for the Academy.

A: In the past couple of years I had put so much focus on launching my Academy permanently at home in Sheffield that I perhaps forgot about trying to attract and inspire people from further afield.

With my camps launching this summer in the US I worked very closely with my best friend and coach Neil Guirey on a UK version. The weekend idea is designed to encourage people to come from far and wide but without the logistical commitments on their time that a week-long camp might create.

Basically I have been on a long journey in my squash career and thought it was about time that I shared what I have learnt to a wider audience. Everything we do on the Masterclasses (as we call each weekend) are things that I have literally done on (and off) court myself sometimes even as recently as the day before. I wanted to give an insight in to my career and methods I have used to be successful but more than that how did they help me create longevity. 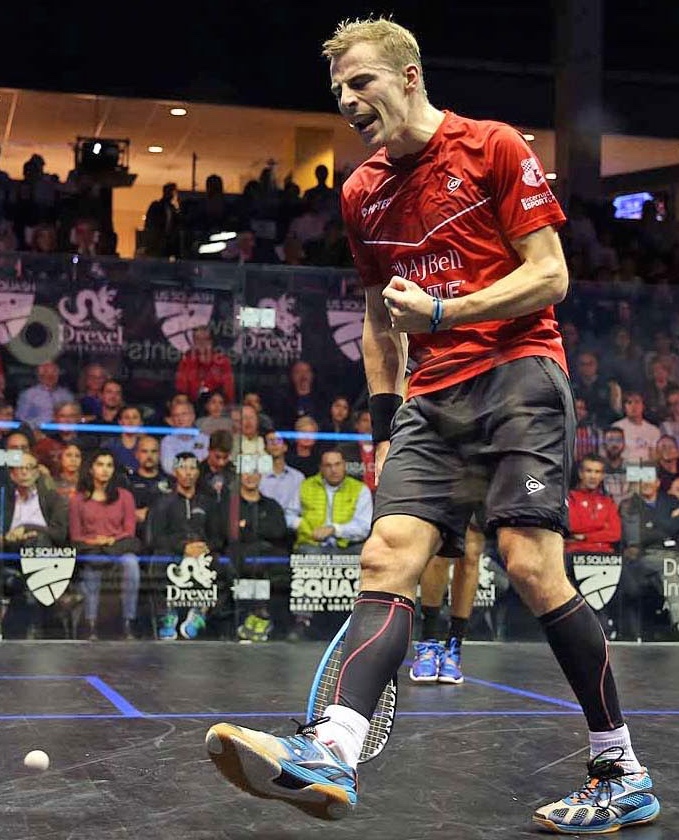 The theme on the first Masterclass (July 8-9) will be around identifying your own ‘Super Strengths’ and how you can build a playing identity around them. On the second weekend (August 19-20) we will be looking at coping with the demands of the modern game and creating specific tactics for certain opponents (something you mentioned above).

For example, Neil and myself have a ‘Ramy game’, a ‘Shorbagy game’ and are developing a ‘Greg game’- conditioned games where I’m limited to certain tactics that are hopefully going to train me on the specifics of those opponents and increase my chances of success.

There will also be access to key members of my team such as Strength and Conditioning coach Mark Campbell, who has helped me in my career since 2007.

Mark has an amazing reputation in squash having trained, in addition to myself, Laura Massaro, Adrian Grant and James Willstrop as well as the All Blacks rugby team.

Mark has just launched his own website Moving Strong in which he designs body weight training routines to strengthen around the key areas very specific to squash.

Please click on the poster below for details of the Nick Matthew Academy UK Masterclasses. 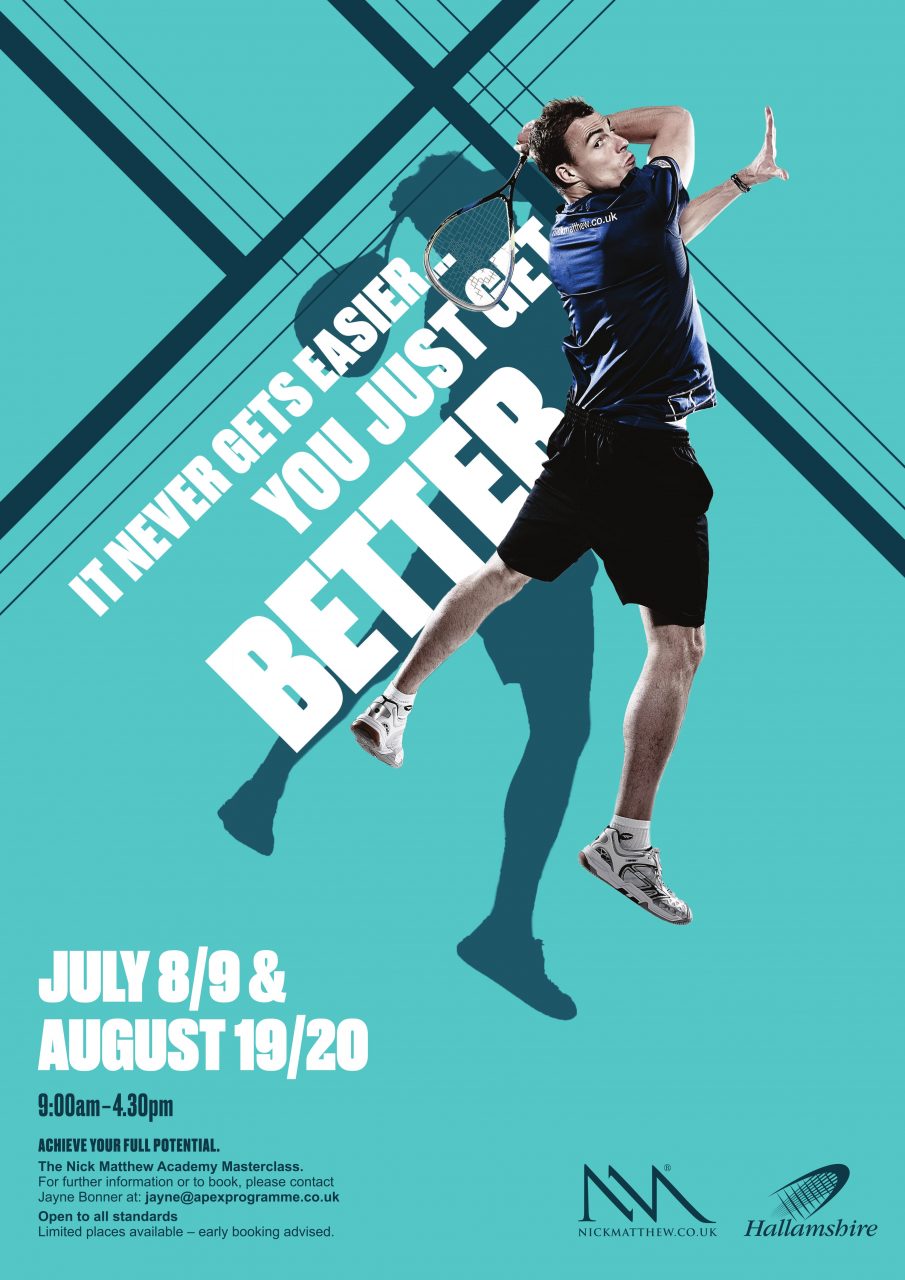 PS: Nick, we would love to host an Academy Masterclass date at The Mote Squash Club in Maidstone.

We would love to take the Nick Matthew Academy on a roadshow around the country, possibly upon my retirement due to time restraints, but that shouldn’t be too long now! We would love to visit Maidstone as part of that.