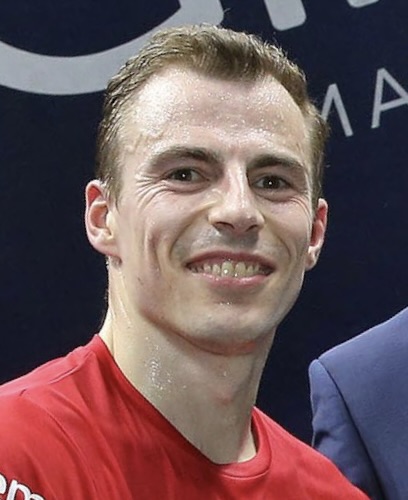 Nick Matthew’s Commonwealth Games Countdown: England’s players can enjoy being tourists for a couple of days but then it’s all down to winning medals

Experience, consistency and composure from James Willstrop and Declan James brought us another gold in the doubles
By NICK MATTHEW (Squash Mad Special Columnist)

England’s blend of youth and experience yielded a haul of six medals at the Commonwealth Games. It also delivered significant promise of more great things to come in the future.

The highlights are easy to list, and Gina Kennedy’s phenomenal achievement in winning the women’s singles gold medal is clearly at the top.

Having an all-England final of the men’s doubles, with James Willstrop and Declan James beating Daryl Selby and Adrian Waller, created history with two teams from the same nation in the final for the first time.

Seeing Dec come through his injury problems in recent months to win gold with James, plus two silver medals for Alison Waters and Adrian, and Sarah Jane Perry’s comeback in the bronze medal match, were all tremendous achievements.

There are so many intriguing sub-plots emerging from the whole Commonwealth Games narrative that the coming season promises to be a journey of discovery for many of the England squad.

Patrick Rooney will have learned a lot from his defeat to Scotland’s Rory Stewart, and Lucy Turmel came so close to beating women’s top seed Joelle King in the quarter-finals, showing that she is more than capable of performing at the highest level in the game.

Tania Bailey and I worked as assistant coaches to national coach David Campion and all in all it was an incredible fortnight in Birmingham with this special team from England Squash.

It was my first experience as part of the coaching staff so didn’t know quite how different it would feel, but it was certainly up there with my favourite Commonwealth Games experiences.

But it wasn’t just the medals; every single member of this team played a huge role not just over the fortnight themselves but for the whole two-year period since we first brought the larger squad together to practice doubles. The team spirit was immense.

So much so that everyone went out of their way to make me feel a big part of it even when watching from the hotel room on the last two days of the doubles after testing positive for you know what!

Gina Kennedy’s gold medal was an incredible achievement. Beating her England team-mate and No.2 seed Sarah-Jane Perry in the semi-finals was equally significant.

I didn’t hear any of the inside news from the New Zealand camp, but my guess is that Joelle King was still suffering from the effects of having to work so hard to beat Lucy Turmel in the quarters when she lost to Canada’s Yorkshire-born Hollie Naughton in the semis the following day.

There are so many fascinating facets of Gina’s triumph. Without giving away any secrets, working so closely with her during the Games in Birmingham was a privilege. She is so raw and inexperienced in many ways, and it is clear to see that she hasn’t even scratched the surface with her full potential.

She was in dominant mode in the first two games against Hollie and then had to regroup after losing her concentration in the third.

Maintaining that high standard of play, and mastering the arts of match management, are all part of the learning process.

Laura Massaro and Jenny Duncalf were two superb players for England and despite their experience they never won a gold medal. I know they had to contend with Nicol David in her prime, but along comes Gina and wins gold at her first attempt.

She is always smiling but after the ruthless way she dealt with the early round opponents in Birmingham perhaps we had better start calling her the Smiling Assassin.

Ranked number eight in the world, she has had a couple of severe beatings from Nour El Sherbini and Nouran Gohar, and right now she will be back in training with Ben Ford, working hard on getting closer to the handful of players above her.

Having won the gold medal, she had to dive straight into the doubles with Lucy and Patrick the very next day.

She didn’t have a second to celebrate her gold medal in Birmingham and I just hope she has managed to find some time since to reflect on her achievements and enjoy her success.

Of our six doubles pairs in Birmingham, four of them won medals. The two that did not were younger pairs and it proved that experience is a key element of doubles play.

Some of the younger pairs from different countries played well, especially on the back courts, but at the business end on the show court was where the experience shone brightly.

Daryl Selby was a perfect example. During the build-up to the Games, I have to be honest and admit I was slightly concerned about his fitness levels but Daryl told me not to worry and that he would time it right. And that’s exactly what he did.

Adrian Waller was always in good shape and what happened in Birmingham was down to all the practice sessions that began two years out.

Nathan Lake, Jaz Hutton, Nick Wall and George Parker all came in and played and it meant that every player in every practice session knew they had to earn their spot.

In the men’s doubles final it was obvious that all four players knew each other so well and in the end it came down to playing good, simple squash.

England’s golden boys James and Dec showed calm composure. There was never any shouting, they were clearly on the same wavelength, they came in as world doubles champions and we knew what we were getting with those two.

It was their consistency and composure that won the final, and it was exactly the same with the two New Zealand teams of Paul Coll and Joelle King, and Joelle with Amanda Landers-Murphy: experienced players winning gold medals by playing simple but effective squash.

As expected, the Scots teams were really good and Rory Stewart carried his form through to the doubles from the singles, where he dug deep to beat Patrick Rooney from 2-1 down in the round of 16.

Patrick will be disappointed that he didn’t play anywhere near his best but Rory, who is ranked 65 in the world, looked more like a top 30 player.

He will want to reproduce that form on the PSA World Tour and it took all of James’s nous and experience to beat Rory in the quarter-finals, and this time it was James who had to fight back from 2-1 down to win.

Joel Makin was too strong for James in the semi-finals and we saw a brilliant men’s final between Joel and Paul Coll. Joel came out fighting and played the best I have ever seen him play in his career.

He has clearly been working a lot on his attacking game and we were treated to the sight of some outstanding backhand crosscourt volley nicks.

When you see shots like that executed with such style and precision it makes you wonder why he doesn’t play them more often. However, Joel has been successful playing a certain way and it’s good to see that he has so much more in the locker.

The final was an immense physical battle with some brutally long rallies, and Paul’s body was breaking down at the end, which shows how hard Joel pushed him throughout the match.

As I mentioned earlier, there are so many fascinating sub-plots to watch out for in the coming weeks.

Joel’s performance will give him a huge confidence boost going into the new season and Paul’s ability to back up his gold medal with another in the mixed doubles will help him as he focuses on winning back that coveted world number one spot.

As Daryl Selby and Alison Waters sail off into the sunset with their richly deserved silver medals, Gina Kennedy and Lucy Turmel can start the new season full of confidence.

Lucy’s battle with Joelle King was great to watch. She played fast and took the game to Joelle right from the off. Her backhand drop was working well and she was very close to causing a massive upset.

The scoreline of 11-9, 16-18, 9-11, 12-14 shows just how close every game was, and the match time of 85 minutes was beaten only by the men’s final (102 minutes) and the men’s quarter-final where Joel Makin overcame Eain Yow Ng in a 98-minute contest that was interrupted and extended by injury to the Malaysian.

For SJP, she had a great fightback in the singles and backed that up with the silver in the doubles with Alison.

I hope there won’t be any kind of hangover for her or any of the England players, and I hope they can all take something positive out of their experiences in Birmingham.

It will be fascinating to see how all these stories play out.

Looking back, the Commonwealth Games was an amazing event for squash. After some understandable anger at the absence of squash from the BBC broadcasts early on, the quality of the TV coverage was superb when it finally arrived.

It provided a great shop window for squash, and we now need to build on all that energy, passion and drama to attract new people to our fantastic sport.

Join Nick on court with Jahangir and Jonah

In one of the best squash workshops ever conceived, Nick will be working alongside Jahangir Khan and Jonah Barrington at the amazing Three Generations PSA Legends Squash Retreat in London from October 24-29.

Guests can improve their game by spending time on court with three of the most successful players in the history of the sport, with 19 British Open titles between them.

Nick will also be holding a Canary Wharf Squash Workshop next March coinciding with the 20th anniversary of London’s favourite tournament.