The gold was all in the bag for Malaysia as Nicol, who was celebrating her 35th birthday on Sunday, lined up against her successor – 19-year-old S. Sivasangari at the Gelora Bung Karno Stadium on Sunday. Yet, it was world number 40 Sivasangari, who already claimed the scalp of Hong Kong’s Annie Au and India’s Joshna Chinappa, who threatened to spoil Nicol’s party.

The youngster was unfazed lining up against her idol and played brilliant squash to storm ahead into a 2-1 lead. Eight-time world champion Nicol looked shaken but dug in and her experience eventually paid off as she completed an 11-13, 11-9, 5-11, 11-6, 11-8 comeback. The gold was certainly the icing on the cake for Nicol’s glittering career as she herself admitted that she will not be around to lead Malaysia’s charge in 2022. 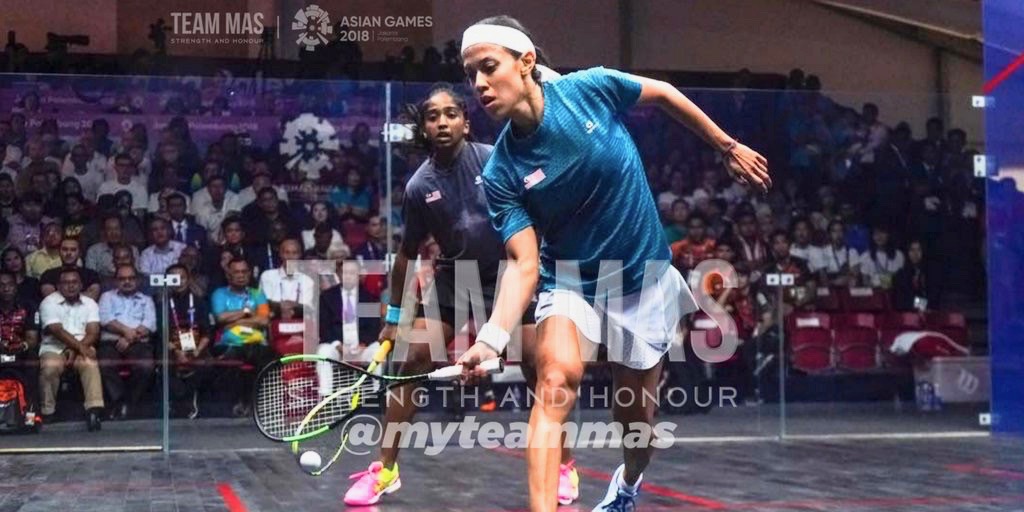 “It’s always nice to win the gold for Malaysia. This win also means a lot to me too as this is likely my last Asian Games,” said Nicol who is the only player to have played in all six editions of the regional multisport spectacle so far.

“Of course it was a really close battle too. Sivasangari came into the final having won the biggest matches in career and she had that momentum going. I knew it was always going to be tough and true enough it went to five. I’m really pleased with my performance in the end.”

“But I’m also really proud of Sivasangari. She has trained hard and she showed that she can stand among the best too.” 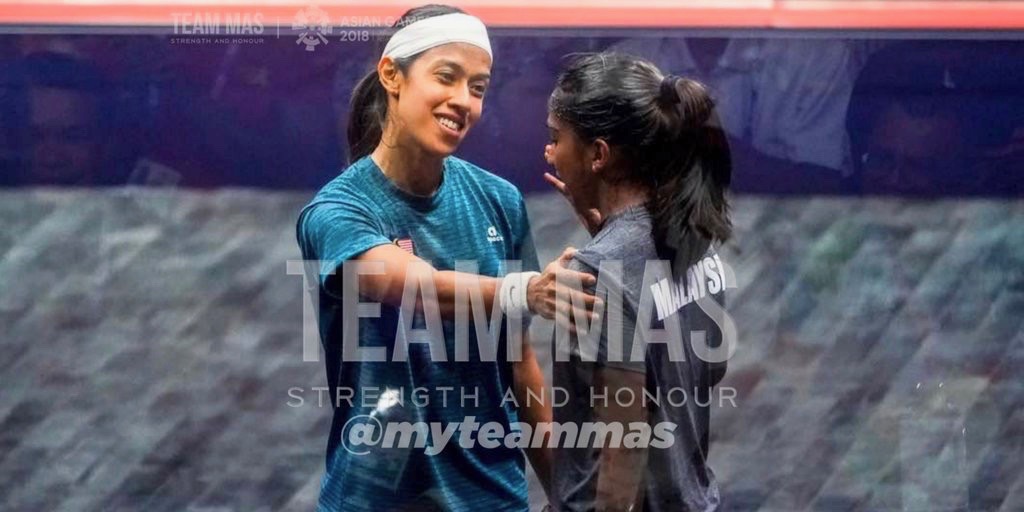 Nicol David was all praise for Sivasangari, who had won her biggest career matches here

Sivasangari was certainly not too down casted despite failing to take her chances against Nicol.

“I’m satisfied with my individual showing. I had an amazing run and I got to play Nicol. It’s certainly a dream come true for me but it’s now on to the next one, which is the team event,” said Sivasangari who will line up as Malaysia’s number three behind Nicol and Low Wee Wern.

Meanwhile in the men’s final, both world number 21 Leo and world number 19 Max also had a lot to celebrate as they ensured Hong Kong’s first 1-2 finish in the individual event.

The pair, who are good friends and training partners, had all to play for as neither has won the coveted title. For most part of their careers, Max has always been on the winning end up to recently, where Leo had begun to turn the tables over his higher ranked team mate. Leo, who also won the Hong Kong national title by beating Max in June, took the early initiative as he stormed ahead for a 2-0 lead. Max did return strong to take the third 11-6 but Leo stepped up his game to seal the gold medal with a convincing 11-4 finish in the fourth game.

“I think both Max and I played very well today. I’m very happy that we made it a 1-2 finish for Hong Kong. On a personal note, I feel that I’ve finally made it happen for myself. All my hard work and perseverance has finally paid off. I’ve proven to myself that I can actually do it”, Leo told us over a phone interview.

It was also a touching moment for their long-time coach Faheem Khan, who himself was a bronze medalist back in 1998 when squash first made its debut in the games. 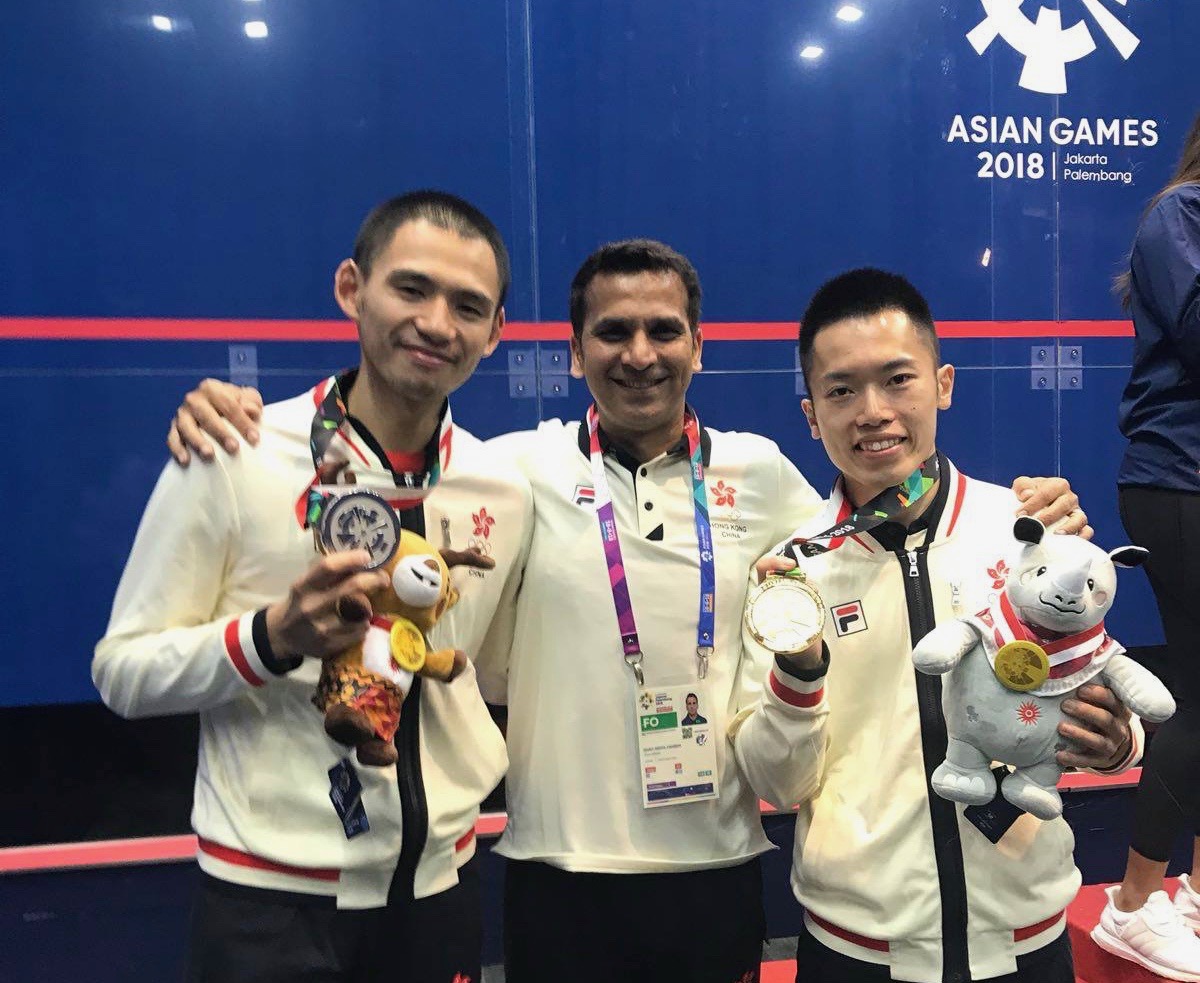 “It’s great to be here. I am so proud of both of them. It’s feel like I’ve won the tournament to be honest! Leo and Max know each other very well of course. I think they both played well today but perhaps Leo just played a little better than Max today, so it’s truly deserving for him.”

The wins by Malaysia and Hong Kong certainly put both the nations in a good state of mind going into the team event.