No.2 seeds Coll and Perry survive scares in France

Alan Thatcher September 13, 2019 No Comments on No.2 seeds Coll and Perry survive scares in France 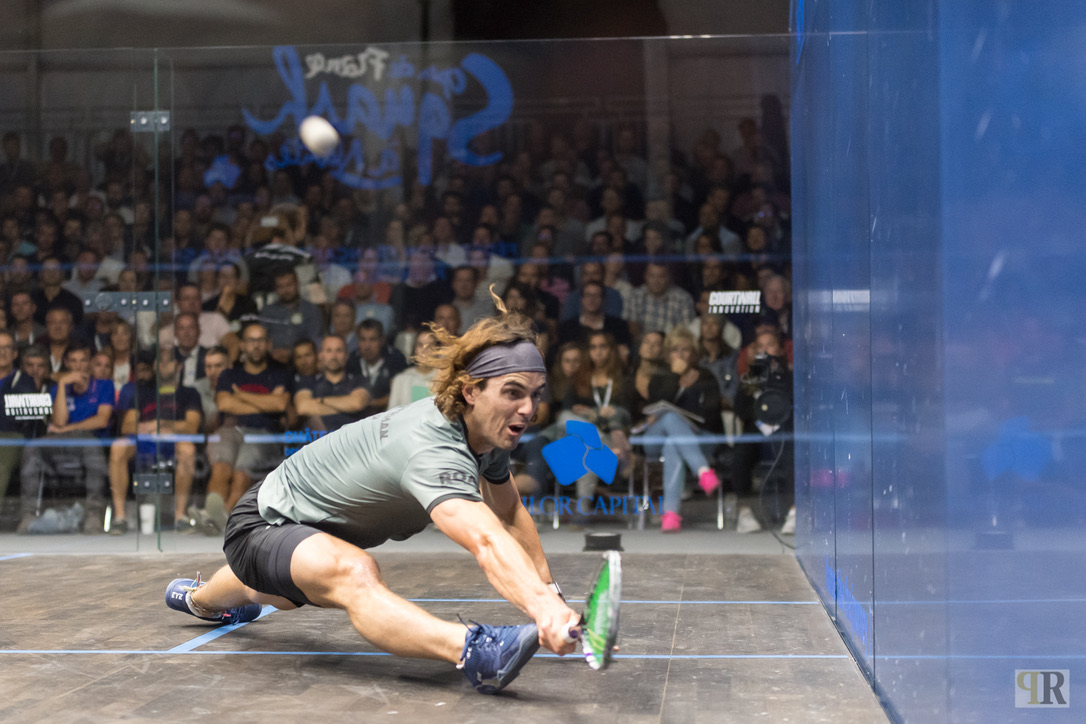 New Zealand’s Paul Coll and England’s Sarah-Jane Perry are through to the semi finals of the Open de France – Nantes after both surviving scares in their last eight clashes at the Chateau des ducs de Bretagne.

The Kiwi played in the final match of the night at the PSA World Tour Silver event, with play going on past midnight. He overcame Frenchman Mathieu Castagnet, to the anguish of the partisan crowd that had gathered around the glass court at the Chateau.

The first game was tight all the way through, with both men having several game balls as it went into a tie-break. Castagnet was the man to take it 15-13 to take a lead in the match. However, the World No.6 battled back to take the second game, restricting the Frenchman to just three points, as he levelled the match at one game apiece.

“I am very relieved to get through that. I thought it was quite high quality in the first [game]. I had my opportunities to close it out which would have been nice, and the I played well in the second,” Coll admitted.

“He [Castagnet] is such a fighter, and I always think that I have got him but he just keeps digging in. He looks like he is about to fall over but he keeps going. He is a real pain, but I loved the battle. It was amazing to hear the crowd and the atmosphere, as much as I didn’t enjoy it, I also absolutely loved it.

“I pushed my shoulders back and stood up a bit taller [in the third game]. I told myself to fight and take the last bit of the game to him. It was now or never if I was going to save it. I had a few mental words to myself to push myself to the finish line.

“It is best-of-five tomorrow so it is probably going to be even later than tonight. I am just going to have a good day tomorrow, sleep as long as possible after doing my recovery tonight. Just relax tomorrow, it is a long day because it is not until the evening that we play, so I will probably have a hit and then see what happens.” 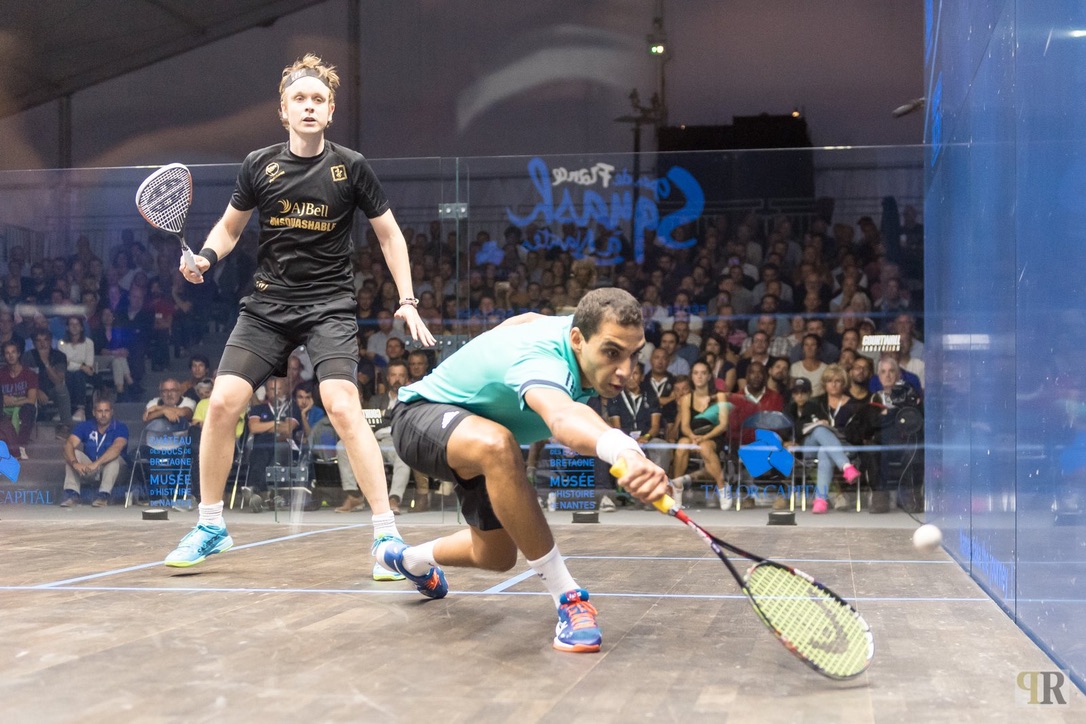 Zahed Salem gets in front of James Willstrop

Coll will now face Zahed Salem in the last four tonight as the tournament changes to the traditional best-of-five format. The Egyptian got the better of former World No.1 James Willstrop in straight games to make his way into the last four.

The first game saw Salem run out Ito a big lead, as he stayed focussed despite some of Willlstrop’s trademark shots. The Englishman saved four game balls, but Salem eventually got over the line to take it 11-8.

In the second, Willstrop came out fighting, but it would be the World No.14 that would go on to take the victory 11-7.   “First of all, I want to say thank you to the sponsors because I love this tournament and I am so happy to be back. To be playing in front of this crowd, it is great to be playing for you guys,” Salem said.

“It is always a pleasure to play such a great player. It is not easy to play against him. I lost twice to him in the past, with one of those coming here in Nantes last year. It was five tough games, but today, I wanted to go for the win as we were playing best-of-three, so I pushed really hard to start with and the plan worked well.

“One of my plans was that I was going to give everything in the first game because if you win it, you only need one more push to win the match. I am happy that it worked well and I am proud of how I played. I worked really well in the summer and I am glad to be through to the semi finals.” 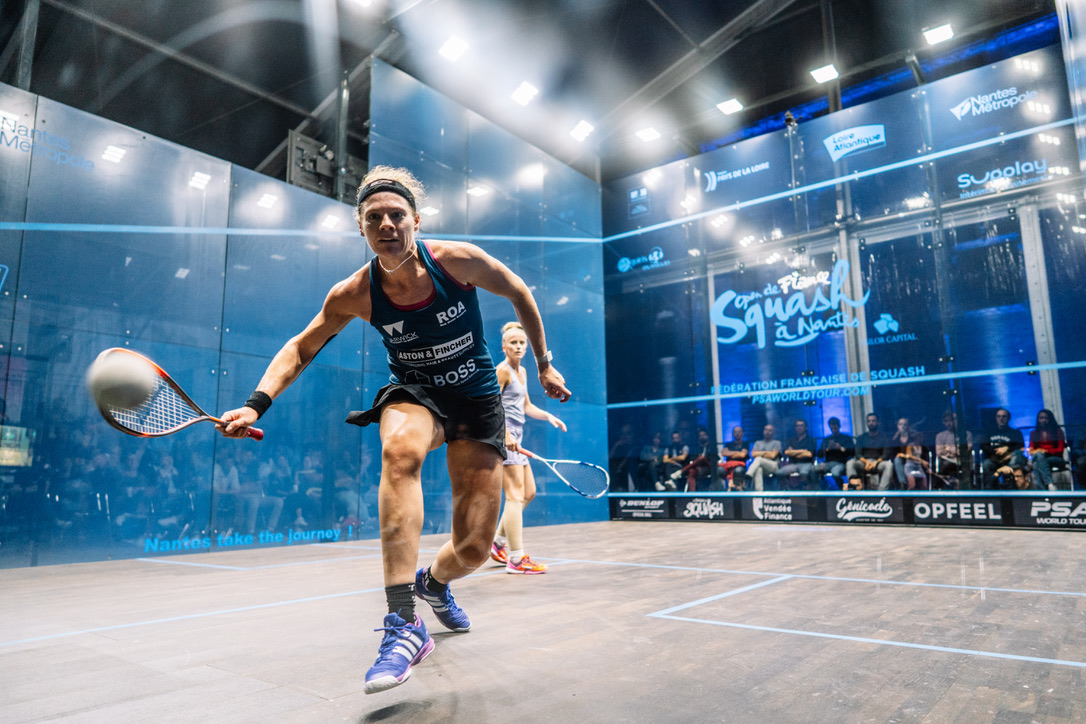 Sarah-Jane Perry battles back to win

Meanwhile in the women’s draw, England’s World No.7 Sarah-Jane Perry had to come from behind to overcome compatriot Emily Whitlock 7-11, 11-8, 11-8 to book her place in the semi-finals in Nantes.

Birmingham-born Perry started off slowly, with Whitlock taking full advantage of her opponent’s start. In her 250th match on the PSA World Tour, she took the first game 11-7 to move into the lead. However, as the reigning Oracle Netsuite Open champion got into the match, her squash improved, and she was able to battle back to take the second and send the tie into a deciding game.

The third was a tight affair, with neither player wanting to give their opponent any ground. But the No.2 seed squeezed home.

“The crowds have been great all week and weirdly, it is really nice when your opponent plays a good rally and they clap, because you then know not to beat yourself up too much. The crowd were fantastic and every point at the end they were up,” Perry said.

“We played in a club match about six months ago and I am not sure that was actually the same player. She [Whitlock] has improved massively and she just came out firing. I watched her the other day and she did the same. It took me a game to get into it, despite telling myself not to do that.

“I had to really dig in there and in the end, I thought I was moving better than I expected to. I think that just about got me over the line in the end. I am happy to come through that because she is playing some really good squash.” 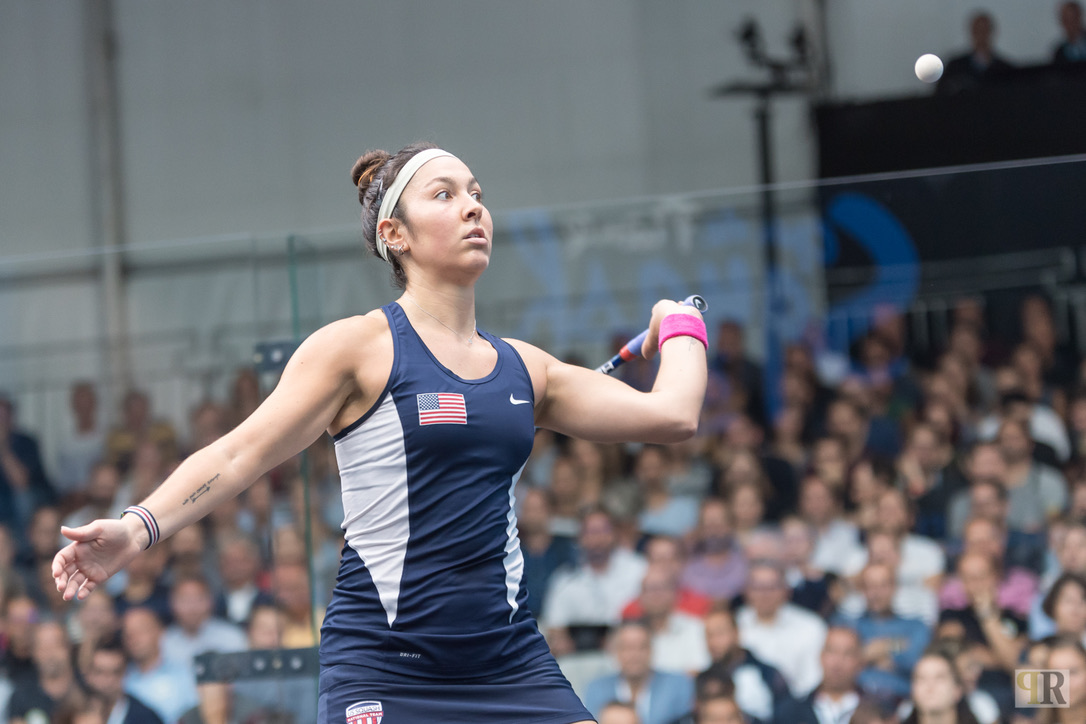 Amanda Sobhy lines up a volley against Olivia Blatchford-Clyne

The Englishwoman will face off against US No.1 Amanda Sobhy in the semi-finals, after the World No.8 defeated fellow American Olivia Blatchford Clyne in three games in the opening match of the evening’s action. She began and finished strongly, winning both games by an 11-1 margin after Blatchford-Clyne had taken the second.

“I think that having such an amazing crowd helps, it was just the difficulty of having to play another US team-mate and good friend,” Sobhy admitted about the match.

“I had to just put that out of sight and try to focus on that she was just another opponent. I think we just wanted to come out and put on a good show for this amazing crowd, which I hope we did.

“Impressive is an understatement. This is definitely one of the best venues we are going to play at on tour, and I am just happy to be a part of it. I think that gives all of us a little added incentive because I don’t think any of us want to stop playing in front of this crowd!”

For once, with the Egyptian big guns missing, each semi-final group will feature players from four nations in action.