Guest Contributor September 29, 2020 No Comments on Nour El Sherbini through to Cairo semi-finals 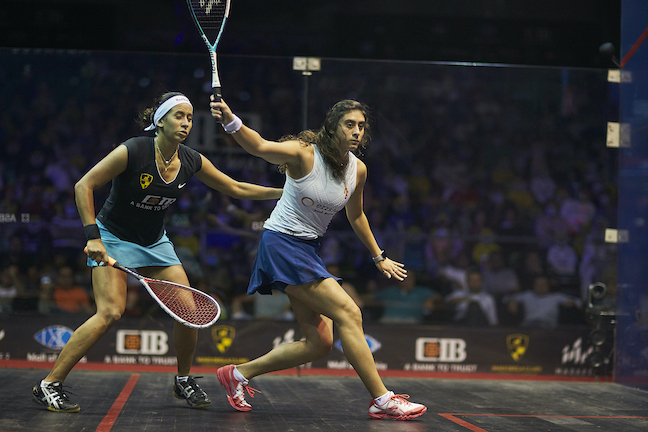 Reigning World Champion Nour El Sherbini has become the first player to qualify for the semi-finals of the CIB PSA World Tour Finals after she overcame World No.1 Nouran Gohar in their Group A clash at Cairo’s Mall of Arabia.

That win sees El Sherbini guarantee top spot in Group A with a maximum eight points out of eight so far after back-to-back 2-0 wins. She now qualifies for the knockout semi-finals, which will take place on Friday (October 2).

“It feels great after playing two very tough rounds after each other,” said El Sherbini. “Nouran has been playing really well over the last reason as you can see from her results. Now she’s come back as World No.1 after the lockdown, so I’m very happy with my performance and I’m really glad that I won 2-0.”

Gohar will go up against New Zealand’s Joelle King tomorrow (Thursday October 1) in a play-off for second place in the group.

King, the World No.8, got the better of England’s Sarah-Jane Perry by a 2-1 scoreline to send her out of this year’s tournament. The Kiwi moves third in Group A and now sits on three points, a solitary point behind Gohar with it all to play for in their fixture.

“I was pretty disappointed with my match last night against Nour [El Sherbini],” said King. “I started well and had a couple of patches that were good, but that’s not good enough for someone of her class. I knew that today I was coming up against another top eight player, so I just tried to forget about yesterday. That is the beauty of this format, I didn’t event think about winning, I just wanted to play well and SJ is a really good friend, so those are the hardest ones to get yourself up there.”

The other women’s fixture saw World No.6 Hania El Hammamy come back from a game down to beat World No.3 Camille Serme in their Group B opener. El Hammamy goes second in that group with three points, a point behind leader Nour El Tayeb, who dispatched United States No.1 Amanda Sobhy last night.

Defending champion Karim Abdel Gawad recovered from an opening day defeat to Peru’s Diego Elias as he overcame top seed Ali Farag to move second in Group A of the men’s event.

Gawad could have been exiting the event tonight if Farag and Elias had both achieved victories, but he was much improved against the World No.2 and achieved an 11-8, 4-11, 11-8 victory to keep his hopes of semi-final qualification alive.

“It was very tough to play Ali,” former World No.1 Gawad said. “It was a tough match, and a deciding match for me, to continue battling for a semi-final place or to be out of the tournament. It is tough, there is a lot of pressure, but I think I played very well under that pressure. My parents always told me to just play your best and to ignore the pressure, winning or losing is all in your own hands.”

Gawad sits third in Group A with four points, level on points with second-placed Diego Elias but below him due to his inferior head-to-head record at this event after his opening day loss to the Peruvian.

The winner of Gawad’s match with Rösner will determine which one of that pair will qualify for the semi-finals, while top seed Ali Farag and Elias will also go head-to-head in a bid to qualify for the last four.

Rösner overcame Elias 2-1 in tonight’s action. The German languishes behind in fourth place with three points, but can still finish second in the group if he can overcome Gawad.

In Group B, World No.7 Marwan ElShorbagy put in a masterclass performance to dispatch World No.5 Paul Coll and move ahead of Welshman Joel Makin into first place.

He lost out to the Kiwi when they met in the PSA Men’s World Championship semis last November, but outwitted Coll to get his revenge with an 11-6, 11-5 victory in 43 minutes.

“Every match you play in this event is really hard,” ElShorbagy said. “I played Paul in the semi-finals of the World Championship last November, so I knew it was going to be a tough match. The conditions were really tough. It was really bouncy which could suit both of us, but maybe I dealt with it a little bit better than him today.”

The group stage of the CIB PSA World Tour Finals continues tomorrow and play begins at 18:00 (GMT+2). All six fixtures from the Mall of Arabia will be broadcast on SQUASHTV (rest of world), Eurosport Player (Europe only), ON Sport (Egypt) and the official Facebook page of the PSA World Tour.