Alan Thatcher May 12, 2019 No Comments on Nour El Tayeb makes it a Manchester farewell for Laura Massaro 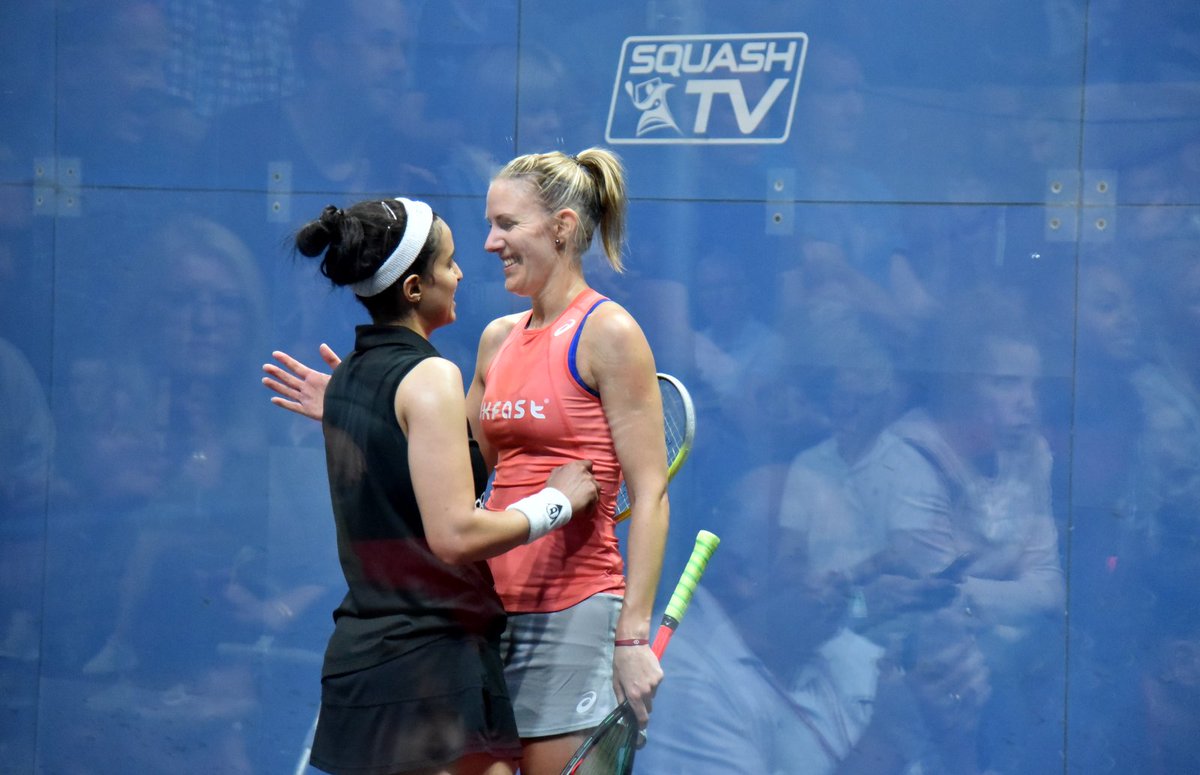 ‘I just wanted to fight hard, play well and put a few blows into the top five’
By ELLIE MAWSON in Manchester

England’s former World No.1 Laura Massaro exited her penultimate event, the Manchester Open, at the quarter finals stage following her announcement this week that she will retire at the end of the season.

The former world champion, in her last appearance in Manchester, provided a tough battle for Egypt’s World No.3 Nour El Tayeb at the National Squash Centre, but it was not enough to stop the top seed from claiming an 11-7, 15-17, 11-4, 11-6 victory.

El Tayeb’s win means that there will be four different continents represented in the semi-final stage of the PSA World Tour Silver tournament, which is the first event to be held in Manchester since the award-winning 2017 PSA World Championships, as New Zealand’s Joelle King, Wales’ Tesni Evans and United States’ Amanda Sobhy all secured wins.

“I was happy to play Laura,” said 26-year-old El Tayeb following her victory. “I wanted to give her something to remember me by. It’s the last two tournaments for her and I have always looked up to her. I’d love to work with her one day, she is the most professional on tour, and I wish I could have half of her career.” 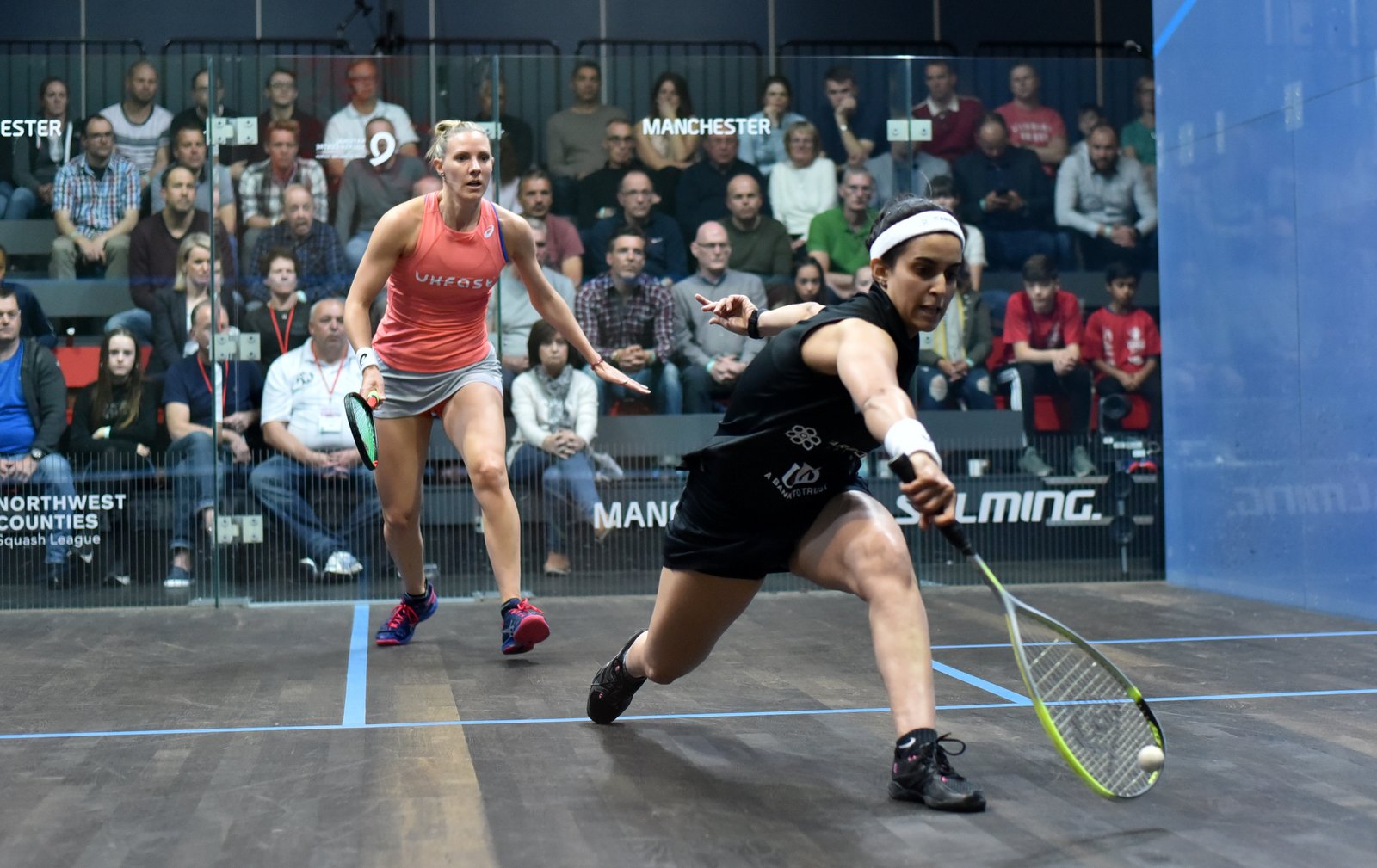 Massaro added afterwards: “I played well yesterday and today. Being able to fight back against the World No.3 was my only goal really.

“When I announced my retirement, I didn’t want to have an events procession. I wanted to fight hard, play well and put a few blows into the top five girls in the world and I’ll be looking to do the same thing at the British Open.”

World No.3 El Tayeb will now face Tesni Evans for a place in the final after Wales’ World No.9 conquered England’s No.1 Sarah-Jane Perry in an epic five-game battle. 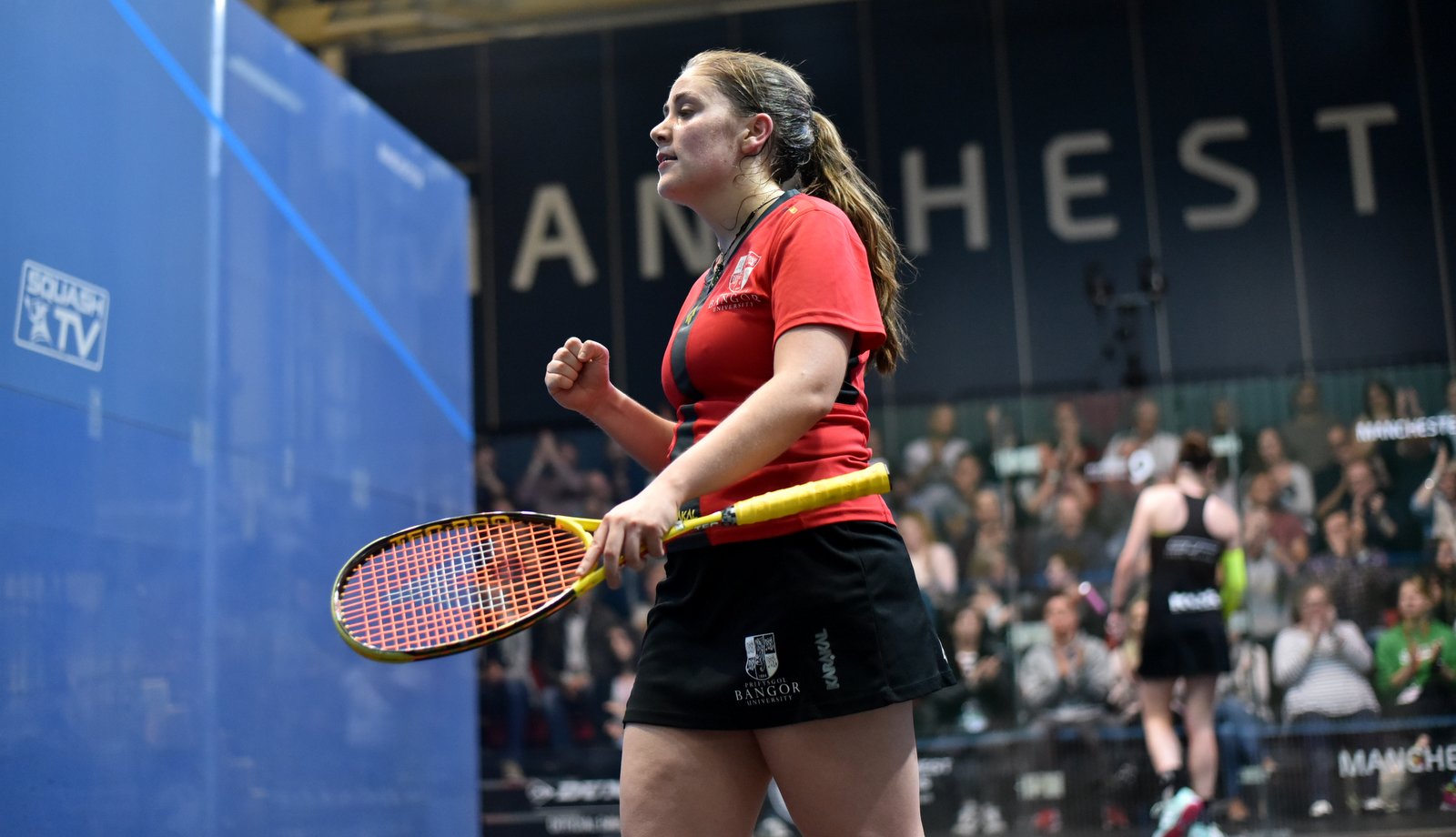 “You can see SJ is back now and playing at her best,” said 26-year-old Evans. “I’m just really happy that I got over the line. I was struggling at the end of the fourth and mentally just down, but I wasn’t going down without a fight, the problem is she doesn’t do that either, so it was just a battle to the end.”

The other semi-final will see New Zealand’s World No.5 Joelle King and United States’ No.1 Amanda Sobhy go head-to-head after they claimed respective 3-0 wins over England’s former World No.3 Alison Waters and Egypt’s World No.7 Nouran Gohar.

“I was 2-0 up so I didn’t want to give Alison a sniff or allow her back into the match,” said 30-year-old King following her impressive win.

“It’s nice to see so many people out here supporting us.” 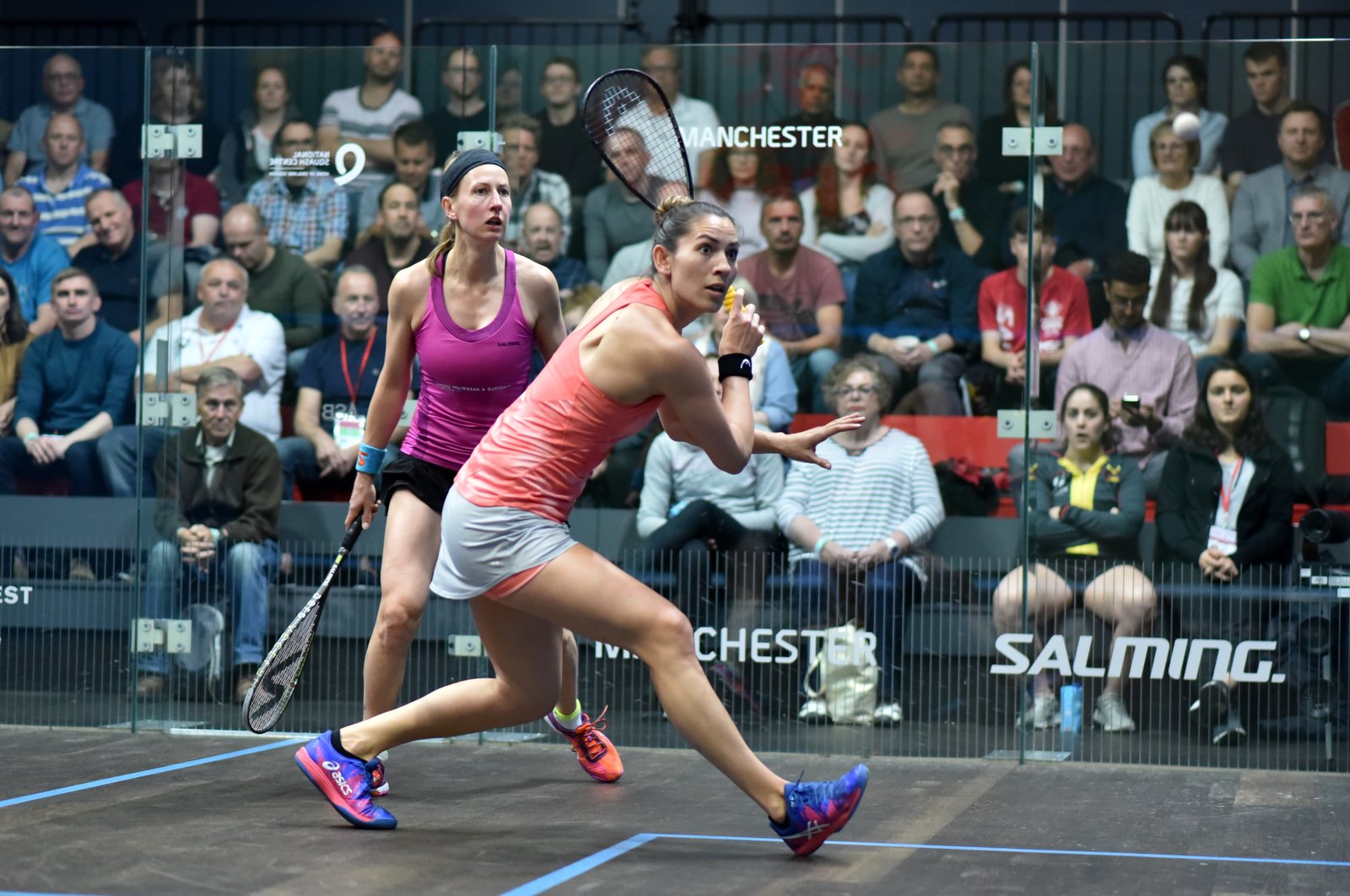 Joelle King on the ball against Alison Waters

Meanwhile, World No.8 Sobhy defeated Egypt’s Gohar in a comfortable performance from the American to claim an 11-9, 11-2, 11-8 victory in just 26 minutes.

“We haven’t played in a while and she just had a good result [in El Gouna],” said 25-year-old Sobhy afterwards. “I kind of knew what to expect from her, she is a relentless player, so you just have to absorb it and chip at it.

“It was a good day, I had to catch her off guard a little bit, but she just keeps coming back and I just had to hang in there in that third game and capitalise on any mistakes. I’m really glad to be off in three.

“It’s nice not to play the top three, which I have done for most of the season. The level is so deep at the moment that anyone can beat anyone on any given day and fortunately I showed up today.”

The semi-finals take place today (Sunday May 12) at 16:30 local time (UTC+1) and the action will be broadcast live on SQUASHTV (rest of world), Eurosport Player (Europe only) and to multiple broadcasters around the world. 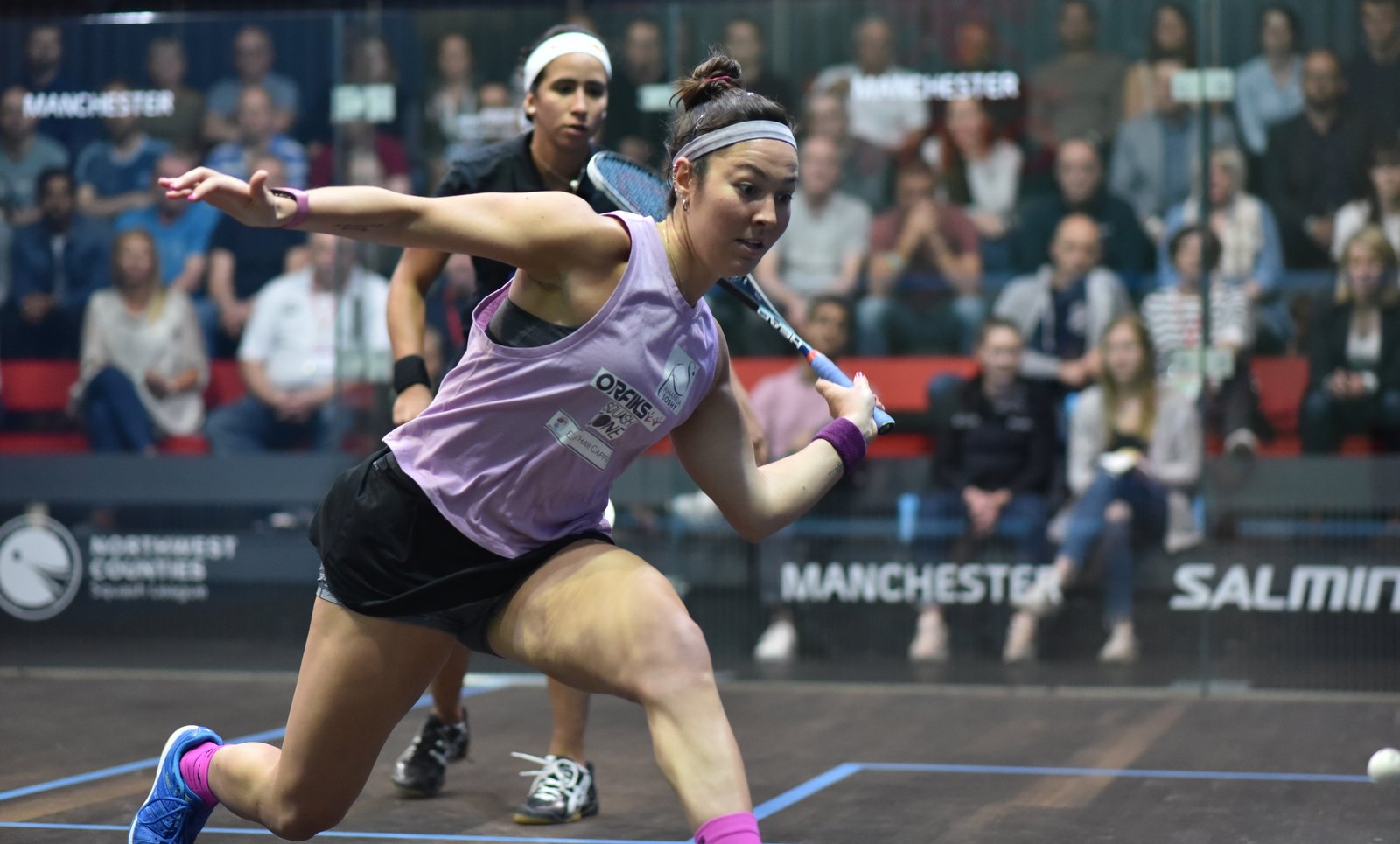