Orla O’Doherty: With my body tied up in knots, I thought a naked Thai massage would help – but the only craic was in my neck! 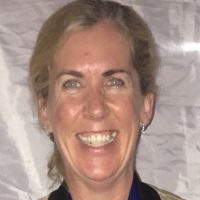 Orla O’Dohertyhttp://www.orladoherty.com
Orla O’Doherty is a former WISPA player who spent 20 years as a professional squash coach in the US. She is the current European Masters Over 45s champion with a three-year reign thanks to Covid! She is a writer and blogger, documenting life stories through humour. If you’d like to read more of her tongue-in-cheek essays, check out her blog at www.orladoherty.com

‘I love the moments of Masters madness as golden oldies try to stay fit, but crawling under the top table with your face at kilt level is not to be recommended’
By ORLA O’DOHERTY (Squash Mad Correspondent and Resident Comedienne)

With five weeks to go until the World Masters Championships in Poland, I am quite certain that all 661 entries are at the ‘maintaining’ phase of their journey to peak performance.

We’ve probably reached a satisfactory level of fitness, and will now focus on fine-tuning the smaller aspects of the game, while preventing the thing we fear most at our age – getting injured.

With the exception of most over-35s and over-40s players, I imagine everyone else, like myself, has accepted that LESS is OFTEN MORE. We don’t need to train like we used to 20 years ago, although I know some of you still do!

Rather, we spend a lot of time listening to our bodies, feeding it with proper nutrition, and avoiding weekend benders. As older athletes, we also know about the importance of active recovery. I learned about this in 2018.

Picture it. Edinburgh, Scotland, a gorgeous spring-time weekend. After more than 20 years coaching in the US, and a move back to my hometown of Dublin, I decided to play in the Home Internationals over 45s representing Ireland. Just for the craic, mind you. I had no fitness, but still had a love for the game, and a love for hanging out with like-minded people.

As is the case on the Saturday night at Home Internationals, a party was inevitable given that there were no matches the following morning. Unless we had an early flight to catch, we were all most likely to exercise our right to have a good time.

I’m quite certain I will NOT be remembered for my squash prowess in Scotland, but instead for my ability to crawl underneath a head table of very important people, including the president of Scottish Squash and some important squash dignitaries, many of whom were wearing kilts.

I think it was Sue Strachan who dared me to do it, offering the handsome sum of £10. I recall it being a rather long table, and I passed by at least six pairs of feet and a few other bodily parts I didn’t expect to see. But hey, I was in Scotland.

I could have won another £10 to crawl back, but my knees (and eyes) were already in a bit of stress.

Several hours before, I met Mandy Akin, who played on the winning English team. Outside the court she was nursing an injury to her knee. After a nice chat with her, learning about her injury management techniques, I left there rather inspired to get myself back into shape. It was because of Mandy that I realised 47 is NOT over the hill.

I left Scotland £10 richer, with bruised knees, and a determination to become the player I’d always dreamed of becoming when I was on the pro tour in my 20s. I began working with a personal trainer, a sports nutritionist, and a performance coach. (I tend not to do things by halves).

As a result, in 2019, I had a perfect year in terms of squash competition. I didn’t lose a single Masters match, winning gold medals in six different tournaments including the British Open.

I also got selected for the Irish National team and pranced around with 19- and 20-year-olds, losing every single match I played. I didn’t care. Having never played for Ireland before on a National Senior team, I was over the moon to play in the European Team Championships that took place at the Edgbaston Club, in Birmingham.

That same year, I learned about the importance of recovery during training and competition. Everything from hydrotherapy, stretching, compression garments, gentle mobility, sleep, nutrition and massage.

Three years later, and now 51, I have been back in action for some four months. I’ve tried all of the prescribed methods of recovery. Hydrotherapy is definitely not for me, but I’m a keen stretcher, an enthusiastic sleeper, decent consumer of good nutrition, and persevere through mobility. Someone recommended Thai massage so I thought I’d give it a try about a month ago. NEVER AGAIN.

It was in downtown Prague. Ordinarily I might enjoy having a little Filipino lady sitting on my head. But not this particular Tuesday morning. It’s hard to relax when one’s face is fixed firmly inside a hole, and the only view you have is the brown carpeted floor, and the overbearing smell of incense is wafting past.

There was soothing music playing, reminiscent of James Galway on the flute, which caught my attention. I was reasonably comfortable, enjoying a warm towel draped over my naked body, my arms dangling down around the top of the table.

Then she walked into the room, asking if I was ready. I muffled “Oh yes, hello, I’m looking forward to this, and …” she cut off my rambling, clearly having no interest in conversing with me. She had a job to do.

I remember seeing her bare feet beneath me, and felt her hands planted firmly on the side of the massage table. Slowly, one foot disappeared and simultaneously I felt it on my shoulder. Oh, I thought, opening my eyes a little wider. Then, yikes, yes, there goes the other foot, and up onto my other shoulder. Sweet baby Jesus, I thought.

Walking all 50 kilos across my back, she pirouetted around and took a nice comfortable seat on the mounded ledge which was my skull. She sat there for a good 20 seconds with her knees embedded into my trapeziuses, her hands pressing down my ribcage, pushing the life out of me.

I gasped, feeling completely vulnerable, praying to God she had good knickers on underneath her sweatpants. “Please don’t let me die this way,” I mouthed – I had no wind left to speak. Having not prayed in over 25 years, I felt it might be time to get back into it.

Suffice to say I didn’t enjoy that massage and left there feeling rather stunned by what had happened.

If you’ve read my last article, you’ll be aware that most of my clothes shrunk during Covid, but I’ve recently decided to start training again in anticipation of the World Masters.

What I’ve noticed most is, it’s not just playing squash that causes injuries. I was at my physio last week for a knot I had in my left shoulder which I believe was caused from playing too much billiards on my recent holiday.

He shared with me a bunch of statistics showing that people over 50, can actually get an injury doing NOTHING. Never mind playing squash three or four times a week.

Last summer, I joined the local Gaelic Athletic Association in Prague – purely because I was missing a bit of Irish banter. During a training session, I managed to partially tear my calf muscle, which ended up taking eight weeks to heal.

I’ve also managed to throw my shoulder out just making the bed. Who hasn’t sneezed and herniated a disc in their back? And how about the old Achilles tendon pain, first thing in the morning? We’ve all taken a good 15 minutes to get from our bed to the bathroom. It can be a right pain in the neck, this getting old lark.

Speaking of that. I DO actually have a right pain in the neck. AND a left pain in the neck. My neck constantly clicks when I turn it. Lately, I’ve taken to sitting to the left of Annabelle, because it’s easier to turn to look at her that way.

This neck pain has caused some numbness and tingling in my arm, which in turn often causes sudden twitches. For example, last week I was visiting my mother in Dublin with Annabelle. It was a hot morning by Irish standards, and I had my favourite bright pink shorts on at the breakfast table, meticulously laid out by my mam. My eagerness to convey the Thai massage story to my mam got me all excited.

“You won’t believe it, mam, she actually sat on my head.”

She rolled her eyes.

Continuing the story, I reached for the yoghurt tub, tweaking my neck which caused the twitch in my arm. The contents of the tub landed perfectly in my lap. On my bare thighs. The cold shock nearly killed me, but I was well aware that if I separated my legs to avoid some of the spill, the yoghurt would smear my mam’s lovely velvet chair. And that would be fatal.

Legs now covered in pale pink strawberry yoghurt, Annabelle jumped to the rescue getting down on her knees to capture the drips. As she wiped the yoghurt from my thighs and between my legs, my mother sat across the table, laughing at my awkward face.

As it was, poor Annabelle jarred her rotator cuff injury, in her haste to save the floor from the dripping substance. Another trip to the physio was required.

Back to my World Masters training. In all my wisdom, I have decided to join Annabelle on what will either kill us or turn us into superwomen. We are off to Spain next week for a full training camp. (Was it me who said less is more?)

I spent 15 years in America running my own camps and working at other prestigious programmes like Princeton University with Gail Ramsay, Mark Talbott’s Camp in Rhode Island, and Demer Holleran’s camp at St. Pauls Private School.

All those years of writing programmes and directing camps, inflicting pain on the kids, makes me wonder if my week in Spain will be a payback of sorts.

Will I have to do court sprints? God, I hope not.

Will there be lots of breaks? My physio very subtly warned me that after two days of this camp, I may have no choice but to take a day off to recover. I’ll be sure to report back to you.

It’s incredibly fun getting older! Stay tuned for my next article, which will highlight my training week in Spain. As much as I love being over 50, and I love being back training again, it’s the little things that we need to watch out for.

My training advice to all masters players? Don’t crawl under banquet tables, avoid Thai massage at all costs, and keep your legs together when eating yoghurt at your mother’s house.