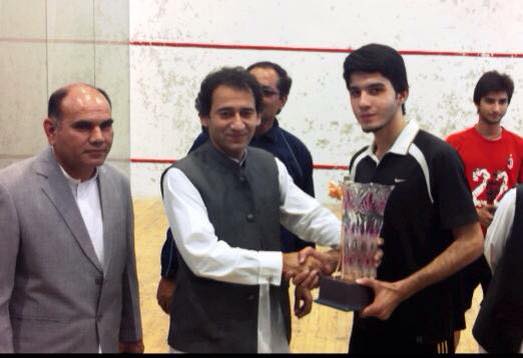 A parent of a leading junior player claims his son was wrongly declared as an over-age player to prevent him competing against other juniors who were allowed to continue competing at junior level despite tests and records showing they were clearly over-age.

Muhammad Sohail Khan claims his son, Arslan, has been victimised and discriminated against by the Pakistan Squash Federation. He has taken legal action in Pakistan to overturn their decision and to expose what he believes is a corrupt and dishonest system of management. Mr Khan has supplied Squash Mad with a selection of documents published below which support his case.

A recent Squash Mad article exposed the fact that several rival nations (understood to include Egypt, Malaysia, India and England) had complained of Pakistan fielding over-age players while wining the World Junior Team Championship in Poland. No action was taken against Pakistan until the publication of our story.

A number of interested parties, including players, coaches and officials from various national federations, have come forward to claim that this has continued unchallenged for decades.

Others have demanded instant bans for the players concerned. Others have suggested that the focus of any investigation should be targeted at the federation officials who knowingly select over-age players, who are reliant on federation funding and simply do as they are told.

The World Squash Federation has since challenged Pakistan to compel all their junior under-19 players to undergo scans ahead of the forthcoming Asian Squash Championships.

“The factor of these players being over-age is absolutely true and I am attaching the copy/scan of original lists of the Squash Federation in Pakistan (Peshawar) which clearly show the yellow highlighted names of players at No.7 Israr Ahmad, No.8 Abbas Shaukat at No. 22 (M. Arslan Khan) who is my son. In 2011, they were competing in the Under-15 category.

“I am drawing your attention only to these three players which will be mentioned in different lists because the Pakistan Squash Federation decided to put the players in different categories regardless of the reasons or facts and figures concerning their age. These three players have been playing in the same age category since 2011.

“In November 2014 the Pakistan Squash Federation announced an over-age list of juniors squash players wherein at number 1 Israr Ahmad and number 7 M. Arslan Khan were listed as being over this age category while Abbas Shaukat has been excluded from being over age, despite being listed as being in the same category in 2011.

“Let me make it clear here that in 2014 list of over age, my son M. Arslan Khan was still under age by eight months but he was put in to an over age group for absolutely no reason.

“I fought my case in the court of Law and won the case and can share the photocopies of the case proceedings which show that the federation was totally wrong and false in filing the names of players in different age categories.

“My son, Arslan Khan, was treated very much in a biased way because the list issued by the Federation itself show both my son and Israr Ahmad as over age but Israr Ahmad was included in the list for the recent World Junior Team Championship in Poland which is contradictory to the already issued list by the federation itself.

“The same pages/lists of over age players are part of my court case here in Peshawar, Pakistan. My son’s squash career now faces a serious challenge.

“Please do not hesitate to ask me anything related to the case because I am one hundred per cent sure that these players are over age and the evidences I can provide is ample enough to prove them wrong because the case is already won in the court.

Here in Pakistan the selection of squash players is not by talent or a professional selection procedure, but, rather personal liking or disliking.

“The career of my son was badly damaged when he was disqualified fraudulently from the CAS Junior Championship in 2014. It also resulted in him not being allowed to compete in future. The reason behind this is that here in Pakistan the selection of squash players is not by talent or a professional selection procedure, but, rather personal liking or disliking.

“After this issue with my son; I proceeded to file a case in the court. I also held a press conference which further deteriorated my son’s career in squash by exposing this issue at such high level. Also the very limited squash courts here are directly under the Pakistan squash federation and they never want to allow those who speak against their ill-doings. So it is obvious that after fighting for our rights, it is further impossible for my son to practice his game in these squash courts.

“Now at this point of time when this story will be highlighted internationally, it will lead further to many challenges to my son by restricting him from squash through many reasons and means. We don’t mind this because I am fighting for our rights.

“I know these people very well. The only thing behind my all these efforts is to safeguard this game of squash form such fraudulent acts and actors.

“When my son was expelled out of the championship in a fraudulent manner, he got more depressed and tense. I had to fight to allow him to continue in squash which is why I held a press conference.”

Mr Khan was clear to point out that his only involvement in squash is as a parent. He added: “My affiliation with squash is not directly as player or coach. I played hockey and football during my time at school and college. I have good and positive terms with world squash champions like Jansher Khan and Mohibullah Khan and this was made possible only due to my regular visits to squash courts with my son.”