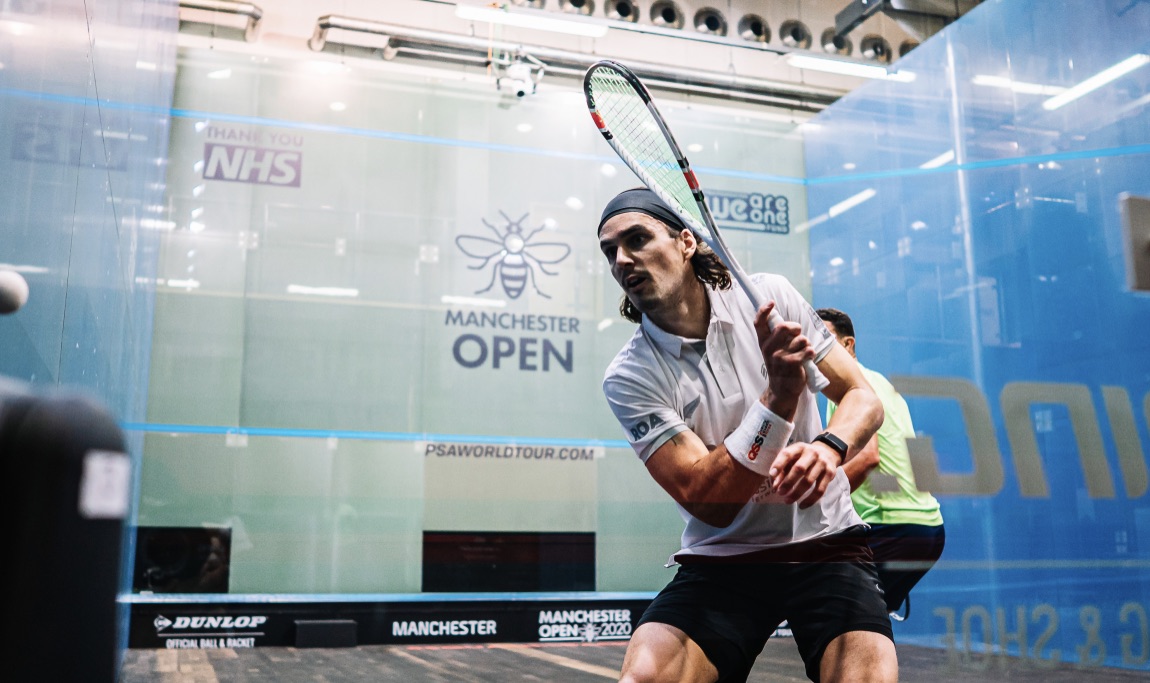 The quarter-finals of the 2020 Manchester Open will feature a rematch of last season’s PSA Men’s World Championship final after World No.4 Tarek Momen and World No.5 Paul Coll claimed wins on day three of the PSA Silver event taking place in Manchester’s National Squash Centre.

Momen, the reigning World Champion, overcame the challenge of World No.11 Mohamed Abouelghar in an unpredictable encounter in which he came back from a game down to win 5-11, 11-5, 13-11, 11-9.

The third game proved crucial as Momen twice fought back from a game ball down and he held his nerve during the crucial points in the fourth to finally close out the win in 55 minutes.

“I started the match really well in the first four or five points but then for some reason the nerves got to me and I couldn’t keep playing like that, I got very tense,” said Momen.

“I think that’s maybe because I haven’t been dealing with nerves for the past six months, so it’s something that I need to train on maybe and get used to again. Thankfully in the second game I managed to regroup and get over this nervousness. He also had an up and down performance. In the second game I didn’t think he played that well and I had a pretty big lead and won that game so easily.

“Up until the third game neither of us were playing well at the same time and then in that third game we played some really good rallies and I’m very pleased with that. In terms of my mental toughness, I felt like I was progressing throughout the match. I played the big points well and I held my nerve in a couple of very difficult situations in the third and fourth game, so there is a lot to be pleased with.” 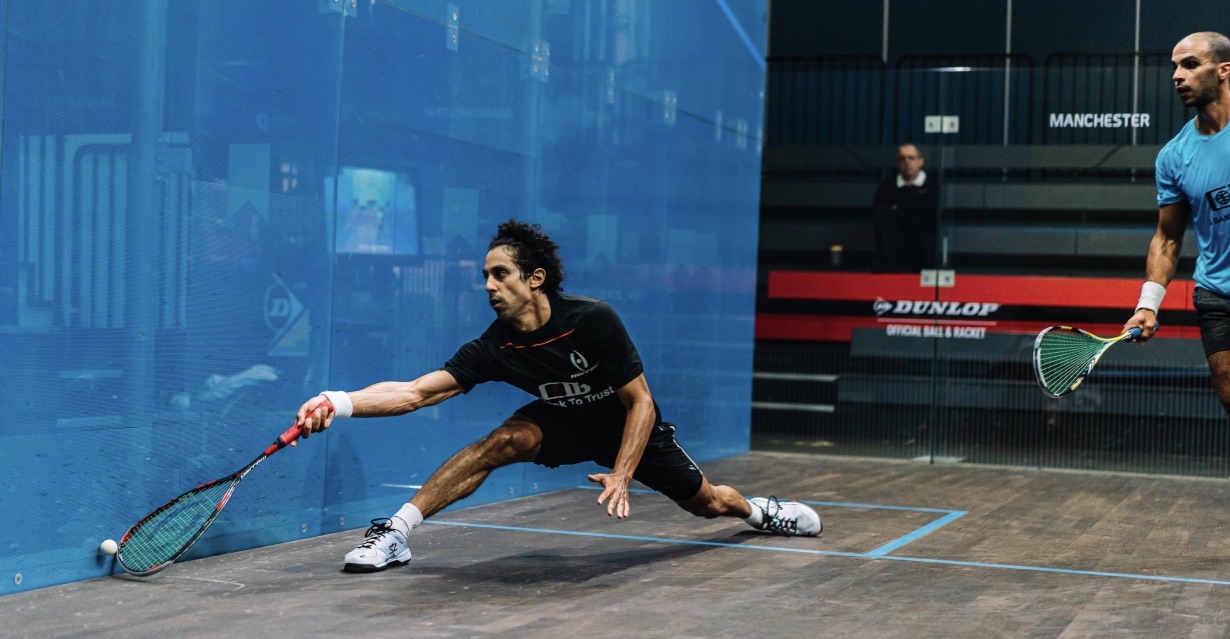 Coll has lost his last two matches against Momen – including their battle in the World Championship final in Qatar last November – and will look to get one over on the Egyptian after he beat Momen’s compatriot, Fares Dessouky, 11-7, 8-11, 11-5, 12-10.

New Zealander Coll had to be on his mettle and recovered from 9-8 down in the fourth game to book his spot in the quarter-finals of the inaugural men’s Manchester Open.

“I was really looking forward to the first match but I didn’t really play my style and I came off court not really enjoying it, I was a bit passive,” said Coll following the match.

“I spoke to my coach and he gave me a rocket and told me to be a lot more aggressive. I enjoyed that a lot more, I felt a lot more like myself and it definitely got the juices flowing.”

World No.1 Mohamed ElShorbagy kept up his impressive start to life following the suspension of the PSA World Tour due to the global COVID-19 pandemic as he swept aside former World No.1 James Willstrop in straight games.

Despite being a relatively short match at just 34 minutes in length, the 24th meeting between the pair was a high-quality affair. The 29-year-old ElShorbagy – eight years Willstrop’s junior – played some clean and tidy squash to dispatch his opponent, moving 13-11 ahead on their head-to-head record in the process.

He will take on Welshman Joel Makin in the last eight after the World No.10 overcame the tenacious Greg Lobban to book his quarter-final spot. 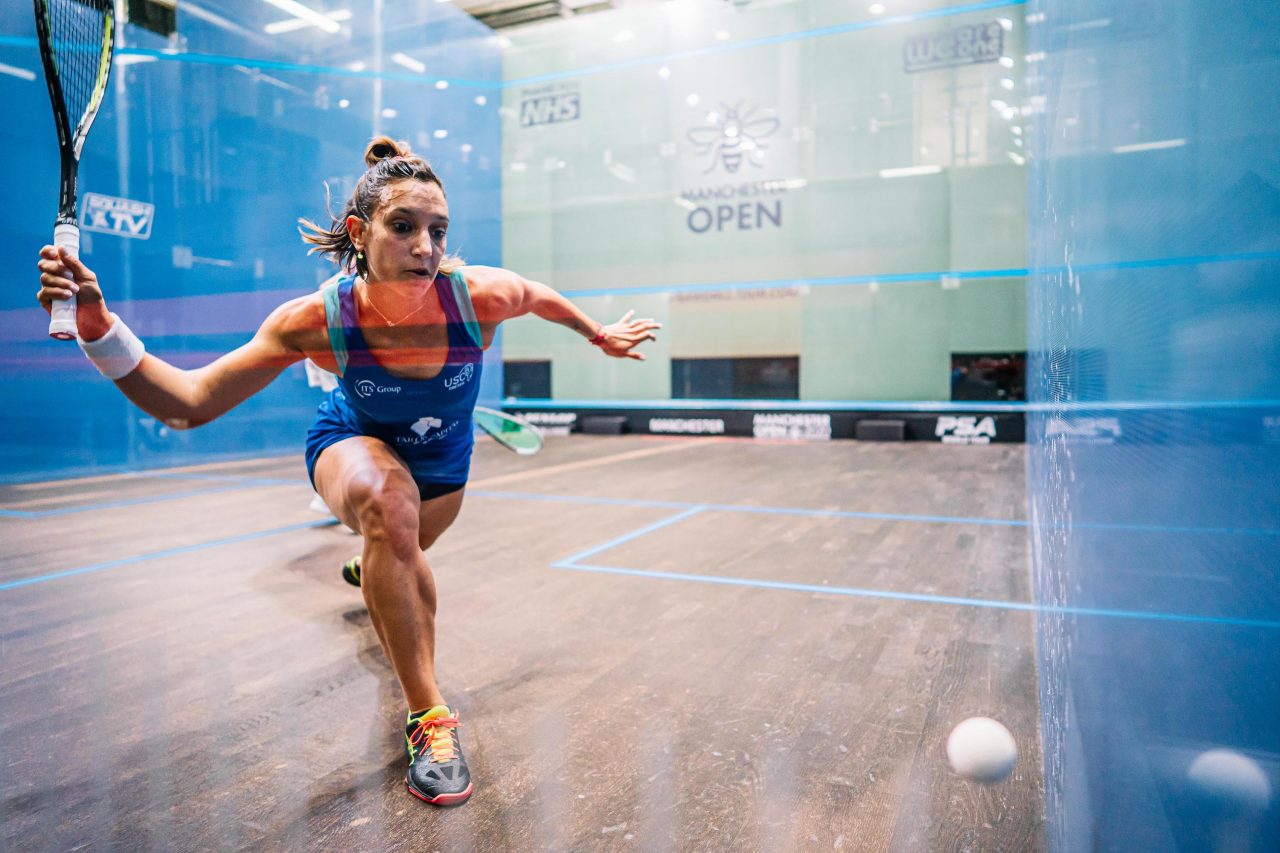 Camille Serme moves into the back right corner against Nele Gilis

Top seed Camille Serme continued her tournament with a hard-fought victory over Belgium’s Nele Gilis in the women’s event as she prevailed by an 11-8, 6-11, 11-4, 12-10 margin after 67 minutes of play.

Serme was tested by the World No.16, who was able to take her first ever game off the French player at the third attempt during a fine display. But Serme held firm after winning a comfortable third game before edging the fourth to earn her place in the quarter-finals.

“It was a tough battle. It is always going to be hard against Nele,” Serme said afterwards.

“Physically, she gets most of those balls if your shots are not good enough. Today, I didn’t find my targets like I wanted to and she made it tough for me. I was battling against myself and my opponent, it was one of those days where you feel up and down but the win is the most important thing in the end and I am happy to be through.”

Defending champion Joelle King will line up against Serme in the next round after an impressive performance from the Kiwi World No.8 saw her defeat England’s Lucy Turmel in straight games.

“Lucy had a big win in the first round [against Nada Abbas] so I was aware that she is playing good squash,” King said.

“Also, she is coached by [former World Champion and World No.1] Laura [Massaro] who is in my team as well. I was well aware of the dangers she possesses, I just wanted to come out here and stamp my authority on the game. There were a couple of blips where I came off it a little bit but it didn’t linger for too long which is really positive.”

The other winners on day three were Egyptian duo Hania El Hammamy and Salma Hany and they will go head-to-head in the quarters following respective wins over Nadine Shahin and Coline Aumard.

Round two of the 2020 Manchester Open begins tomorrow (September 18) at 11:00 (GMT+1). Action will be shown live on SQUASHTV (rest of world), Eurosport Player (Europe only) and the official Facebook page of the PSA World Tour (excluding Europe & Japan).