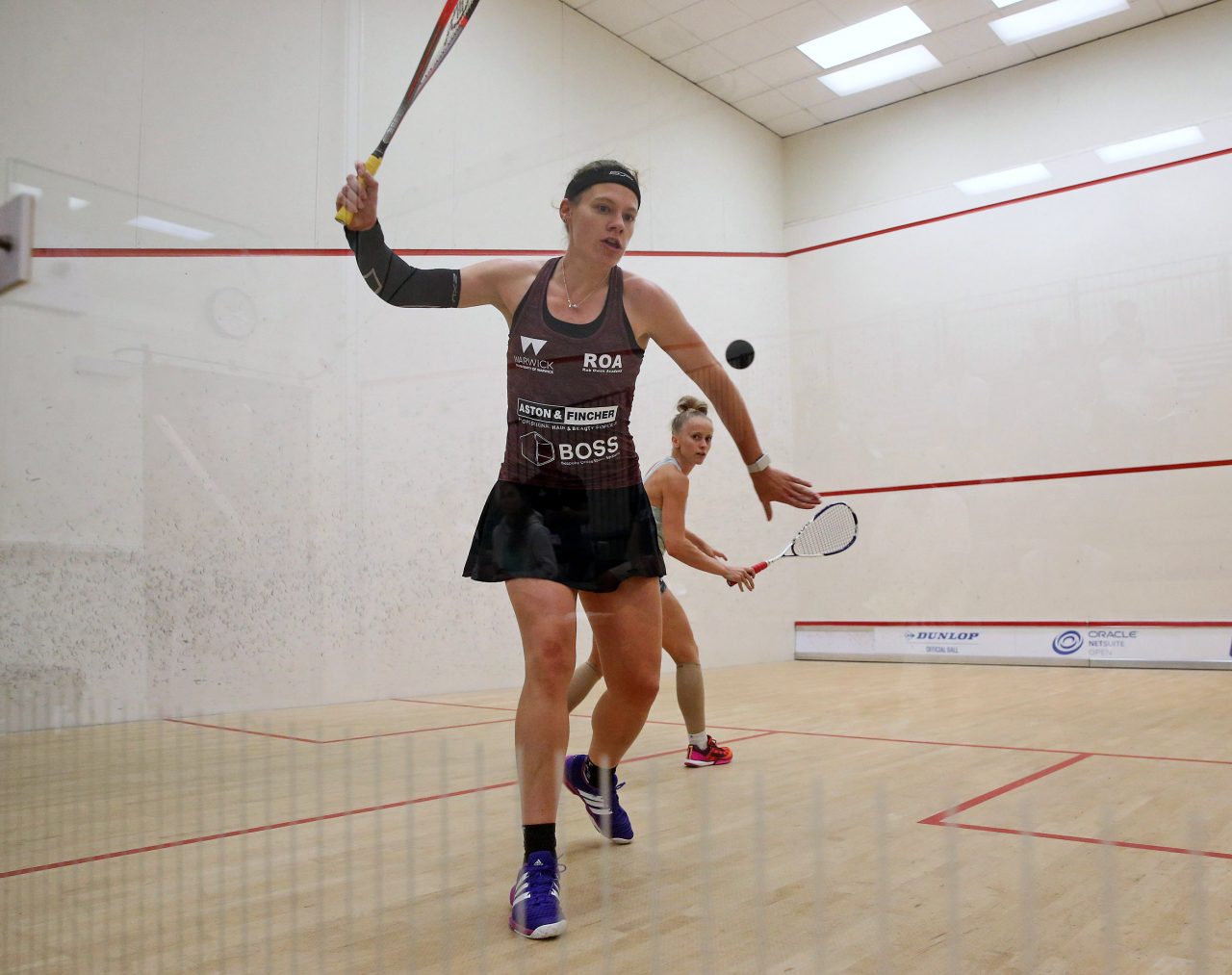 Sarah-Jane Perry in action against Emily Whitlock in San Francisco

Sarah-Jane Perry and Joel Makin, both coached in Birmingham by Robert Owen, led a quartet of British players into the quarter-finals of the 2019 Oracle NetSuite Open in San Francisco.

Also through are Scotland’s Alan Clyne, who ended the hopes of England’s Declan James, and Welsh number one Tesni Evans, who beat Egypt’s Salma Hany.

England’s World No.7 Perry is through to the last eight after defeating compatriot Emily Whitlock at the Bay Club in San Francisco.

Perry, who won this event in both 2017 and 2018, needed just 18 minutes to win her second round clash as she fought back to beat her fellow Englishwoman in both games.

The pair were meeting for the second time in three weeks, having faced off in the quarter-finals of the Open de France – Nantes, where Perry got the better of Whitlock in another best-of-three clash.

Once again, Whitlock started the stronger of the two, but Perry was able to win the opening game 11-6. The same pattern occurred in the second, as Perry changed tactics to take the pace off the ball. And it worked to her advantage.

Perry said: “She played really well against me a couple of weeks ago in Nantes. I felt a little flat in that tournament, but I have been feeling better in between, and I just tried to come out and play with a little bit of confidence.

“As both games went on, I started to find my way and my rhythm and momentum. Hopefully tomorrow, I can actually start well and not wait until halfway through the game. 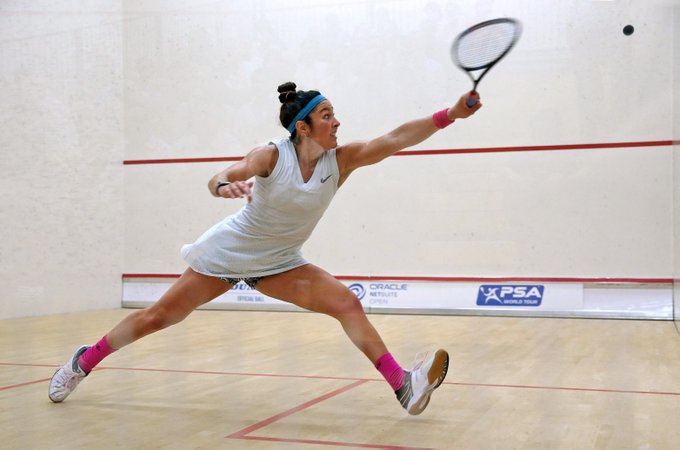 Amanda Sobhy stretches for a volley

“It feels a lot like last year. I think I was the No.5 seed last year as well so it is very much the same. Every opponent was tough last year and that is the same again this year. You are never thinking about any rounds further ahead, just the one that is right in front of you.”

The tournament’s No.5 seed advances through to the quarter finals, where she will face World No.1 Raneem El Welily in a repeat of last year’s Oracle NetSuite Open final.

The Egyptian superstar had to come from a game down to defeat United States No.2 Olivia Blatchford Clyne, eventually winning out 9-11, 11-5, 11-5 to seal her spot in the last eight.

Fellow American Amanda Sobhy, the No.6 seed, was in fine form, overcoming Milou van der Heijden of The Netherlands 11-6, 11-3 in just 16 minutes. No.3 seed Nour El Tayeb lies in wait in what is sure to be a blockbuster battle on the glass court.

In the men’s draw, the unseeded Raphael Kandra overcame compatriot and World No.5 Simon Rösner in the last match of the night at the University Club.

Despite being from the same nation, this was only the third time that the pair had met each other on the PSA World Tour, with Rösner having been successful in the previous two. 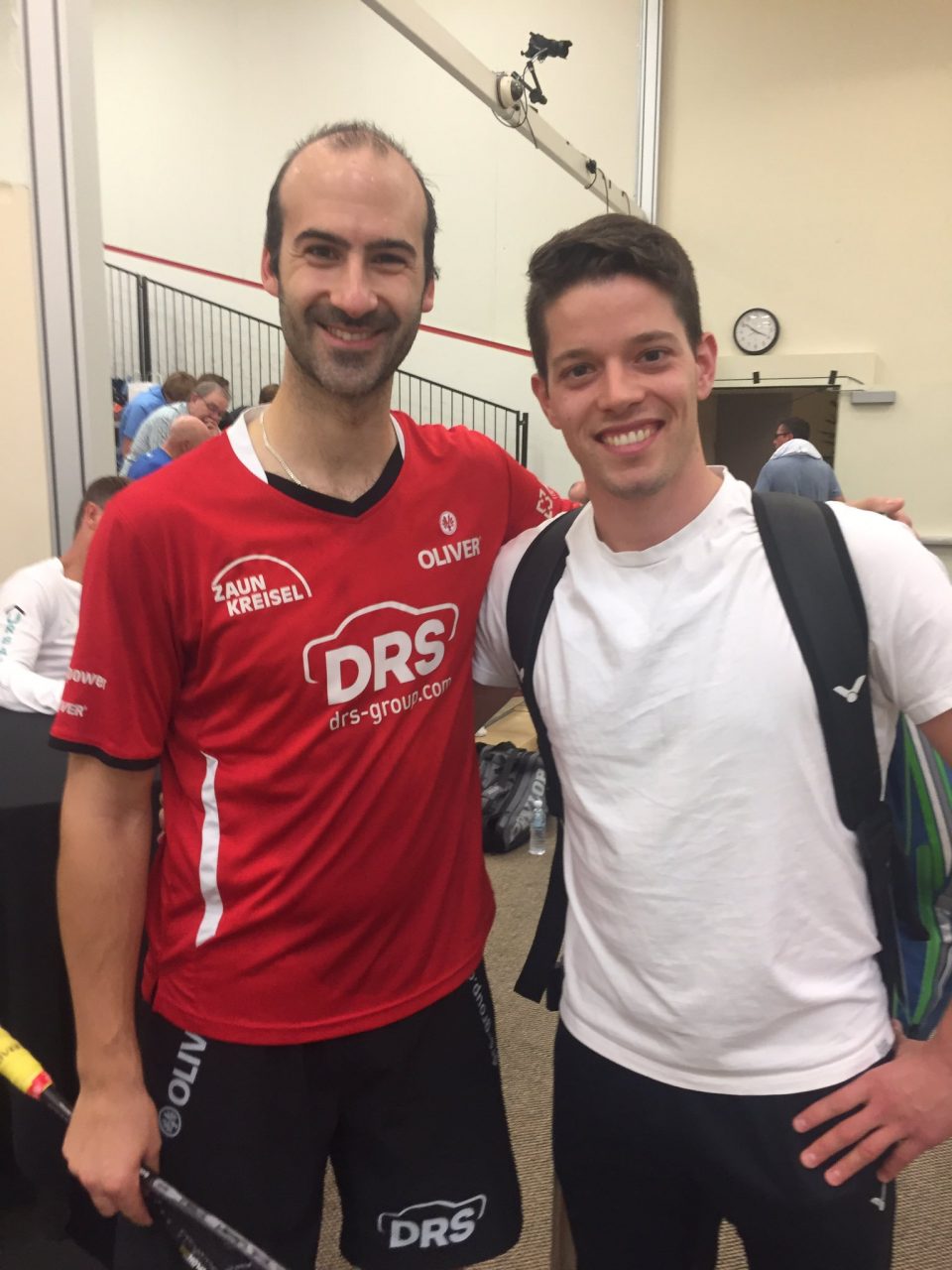 This meeting started off in a very tight fashion, with neither player wanting to give an inch in the opening exchanges. However, Kandra was able to take the first 11-9.

The second was slightly easier for the German No.2, who reached the semi-finals of the British Open in 2018. He secured the victory with an 11-7 scoreline in the second, setting up a clash with Egypt’s Marwan ElShorbagy in the last eight.

“Two days ago when I beat Iker [Pajares Bernabeu], I had a similar strategy of precision and pressure, and it worked quite well even though it was a different court at the Bay Club,” Kandra said.

“With the new format, you get punished for your bad shots or when you go for a silly shot. Almost 50% of those opportunities for him went into the tin luckily for me.

“I was trying to stay as mentally sharp as I could. With a maximum of three games, physically you can push yourself, but in my head I had to stay sharp and make the precise shots.”

Elsewhere on day three, Alan Clyne got the better of No.7 seed Declan James in a terrific three game tussle. The Scot won the first on a tie-break, but the Englishman fought back in the second.

However, it would be the World No.44 from Edinburgh who took the victory, after he won the deciding game 11-5. Clyne will now face World No.9 Miguel Rodriguez in the last eight at Embarcadero Plaza.

Today, the action moves to the spectacular glass court in San Francisco’s Embarcadero Plaza for the quarter finals and onwards. 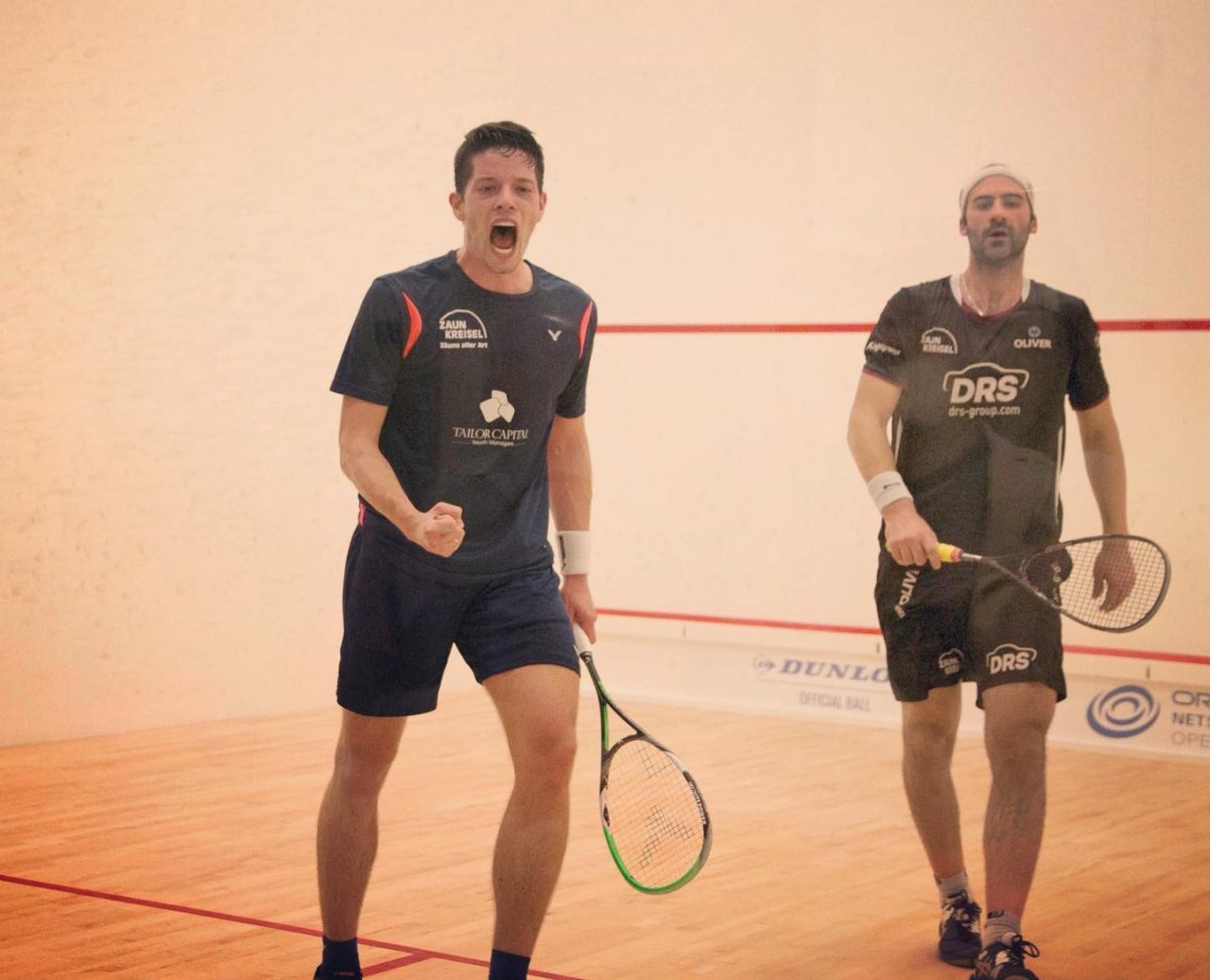