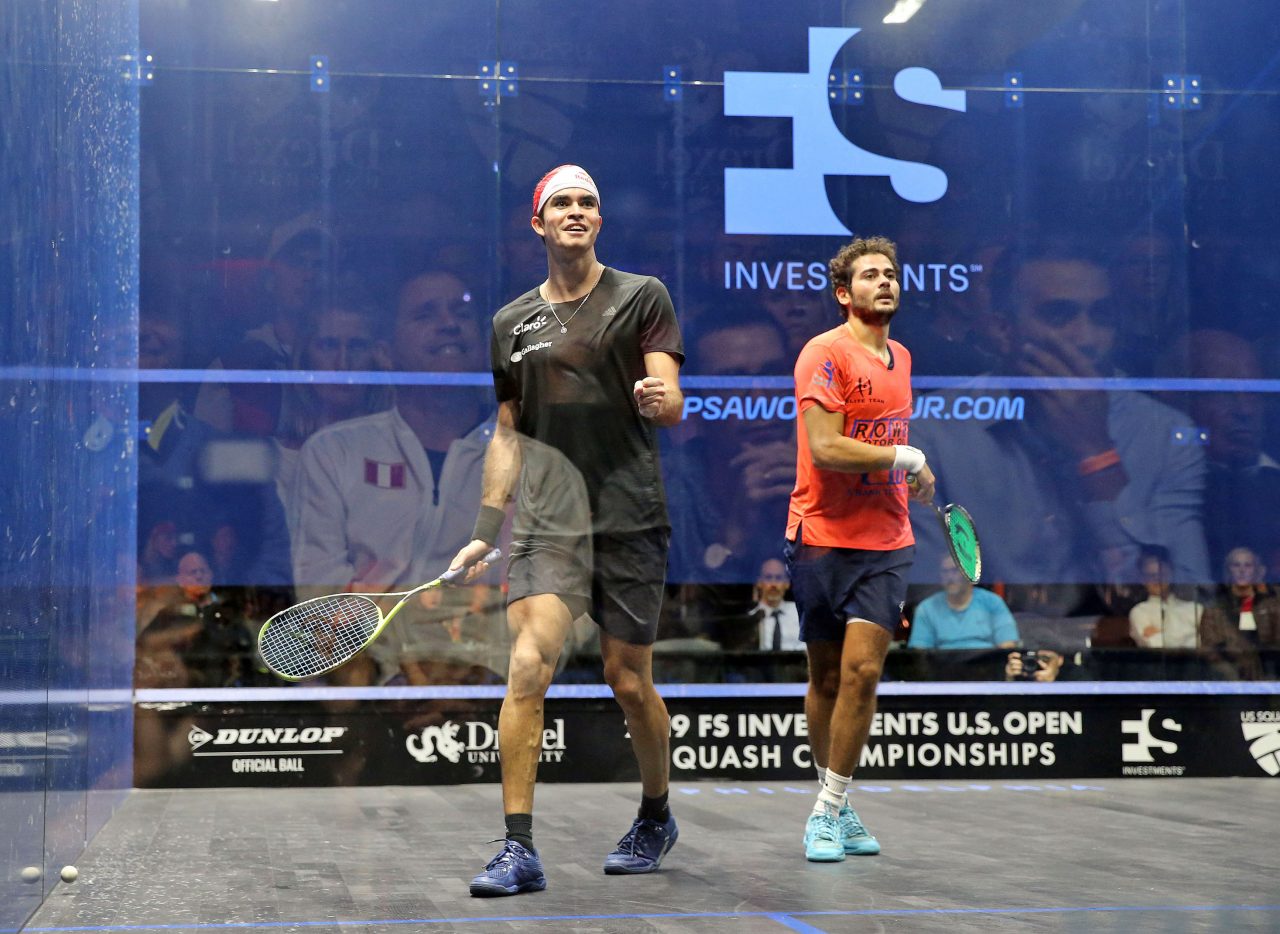 IntroPeru’s World No.7 Diego Elias will become the first South American to appear in the semi-finals of the FS Investments U.S. Open Squash Championships after he came back from a game down to overcome World No.4 Karim Abdel Gawad at Philadelphia’s Drexel University.

Gawad raced out of the traps to take a one-game lead, but three tins from the 28-year-old towards the end of the second game proved costly as Elias levelled. Gawad continued to hit too many errors as Elias added the third, but was back on top in the fourth to set up a decider.

However, he had few answers to Elias’s guile as the No.7 seed kept him at arm’s length to close out a win which will see him take on World No.1 Ali Farag for a place in the final.

“I’m just so happy with my performance today,” said Elias. “I think I like this place – it was my first quarter-final here and now my first semi-final here. I’m just really happy to have my dad here and [former World No.1] Jonathon [Power], he has been helping me for so long and I’m really happy that this is happening.

“I’m feeling really confident, now I have to recover. I always have good matches with Ali, so I want to be at 100 per cent to play well and have another great match with him.”

Farag was slated to take on Colombia’s Miguel Rodriguez in the final match of the day, but a calf injury saw Rodriguez withdraw from the fixture, meaning 2017 champion Farag receives a walkover into the last four.

The women’s semi-finals will feature a repeat of the 2017 women’s final as World No.1 Raneem El Welily and World No.3 Nour El Tayeb both booked their last four spots after respective wins over England’s Sarah-Jane Perry and two-time World Junior Champion Rowan Elaraby. 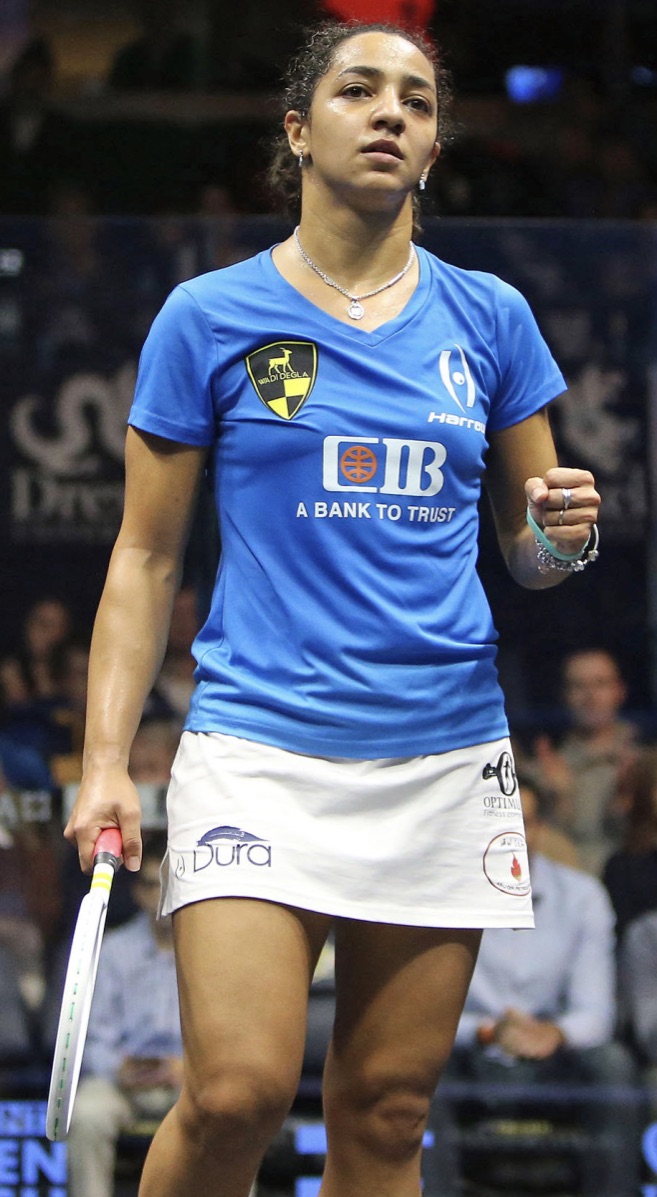 El Welily and El Tayeb contested the final of this tournament two years ago, with El Tayeb claiming a dramatic 3-2 victory to lift her first PSA Platinum title.

That win came before husband Ali Farag overcame World No.2 Mohamed ElShorbagy to capture his first major title, meaning they became the first married couple in sporting history ever to win the same major sports title on the same day.

El Welily (pictured) and El Tayeb have already met in back-to-back finals at the first two PSA World Tour events of the season – the J.P. Morgan China Open and the Oracle NetSuite Open – with both players collecting a win apiece.

El Welily, who dismantled El Tayeb in just 23 minutes in the Oracle NetSuite Open final, earned her spot in the semi-finals of this tournament after beating Perry 11-6, 14-12, 11-8.

“I’m so far away from defending my title,” said 30-year-old El Welily after claiming her 350th PSA Tour win.

“It used to be very hard for me mentally to play the same person again and again, but since the years have passed, I think I have got used to it.

“We play one week after the other, and it’s very common that we play the same person back-to-back. It’s just another match, I don’t think of it as a repeat of something that has happened before, it is just a new match and a new opportunity.”

The 19-year-old Elaraby, the World Junior Champion in 2017 and 2018, caused the biggest upset of the tournament so far when she dispatched World No.6 Joelle King in round three, and she began the fixture with El Tayeb well, showing no fear as she surged into a 4-0 lead in the opening game.

But from there, it was all El Tayeb as the World Championship runner-up hit her stride and played an array of winners to book her place in the last four. She is currently 13-7 down on the head-to-head record against El Welily and has won one of their last four meetings. 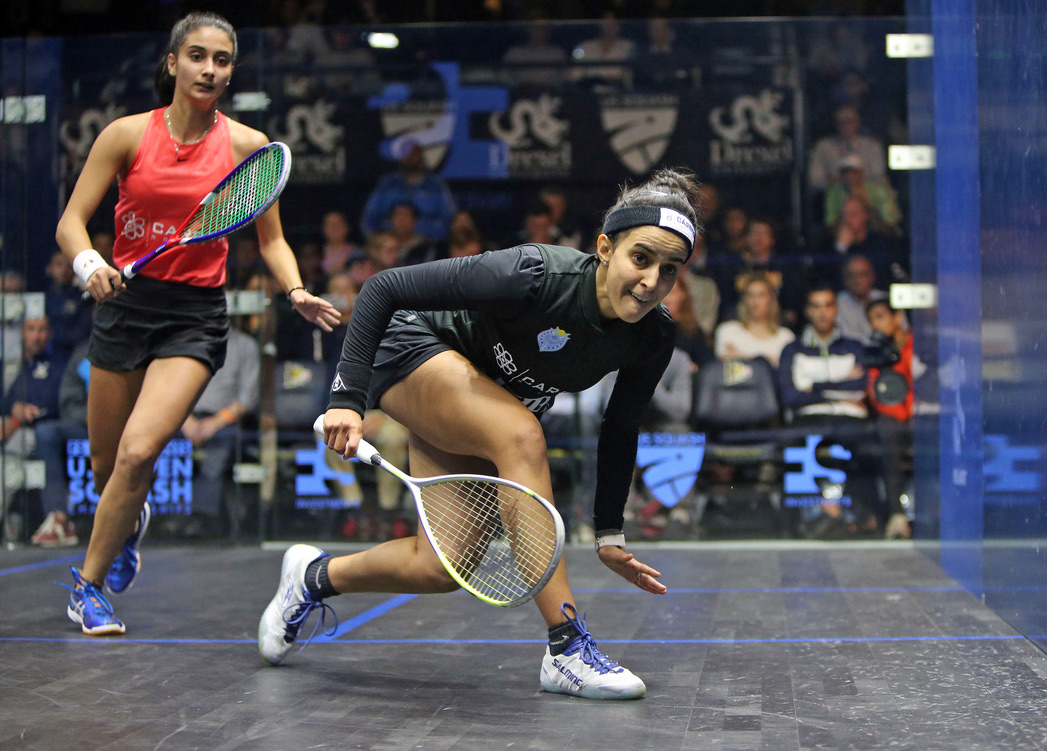 “I can’t wait to get back on here for the semis and hopefully reach another final. I’m happy that I’m reaching the stage where I’m playing Raneem. It’s been a great season so far, she is the best in the world for a reason, but I can’t wait to get on there and play a good match.”

The quarter-finals continue on Thursday October 10. Play begins at 17:30 (GMT-4) and will be broadcast live on SQUASHTV (rest of world), Eurosport Player (Europe only) and the official Facebook page of the PSA World Tour (excluding Europe & Japan).