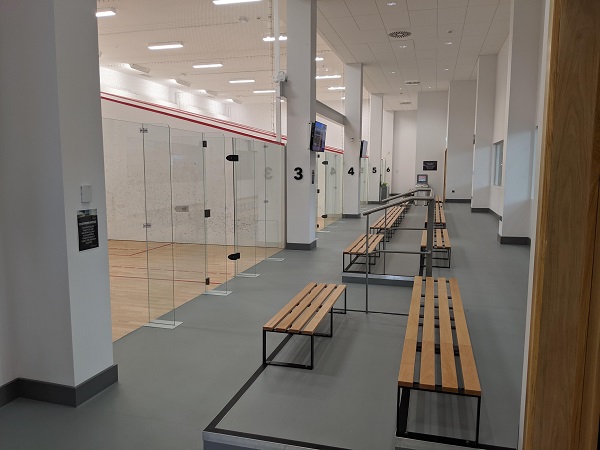 After just 2 seasons in the Premier Squash League (PSL), University of Warwick/Kenilworth Squash (WarKens) have already made quite an impact, topping the Northern Division last season and narrowly missing out on a spot in the Final. I made a recent trip to the University of Warwick to catch up with WarKens Team Manager Steve Townsend and chat about the team, his thoughts on last season, as well as his plans and ambitions for the coming season.

Before we chat though, there is the opportunity for a tour of the magnificent £49m University of Warwick Sports and Wellness Hub, which only opened back in April of this year. It is fantastic to see our local universities in the West Midlands investing so extensively in new sports facilities, this coming hot on the heels of the University of Birmingham’s new sports centre, the new home of WarKens’ PSL local rivals, the Birmingham Lions.

In terms of squash facilities, the Hub boasts 6 glass-backed courts, located in a very prominent position right at the main entrance. As a result, everyone using the centre walks straight past them as they come in. Steve tells me that this leads to lots of people stopping to watch what’s going on, and they often hear comments like “Wow, squash looks cool!” He is therefore very confident it will increase participation massively at Warwick. 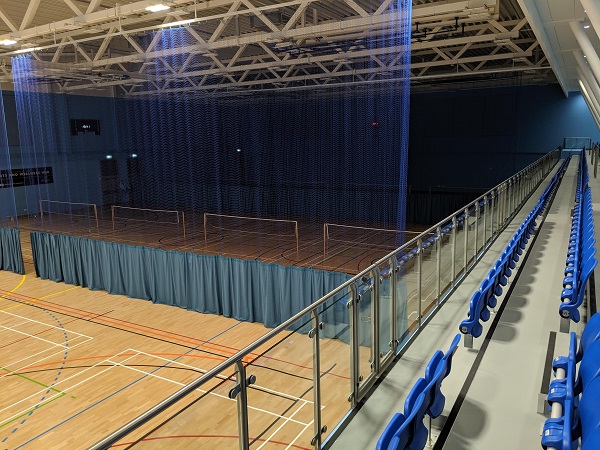 Other features of the Hub, which the squash players can access for training, include a 12 lane swimming pool, an amazing gym with 15 racks and 250 stations, physiotherapy, 2 giant sports arenas and a jaw-dropping climbing wall, not that Steve will be letting the players on that!

Steve is hoping that these new facilities will enable the University to stage some major squash events in the future, including bringing in an all glass court, as has been done at the University of Birmingham. In terms of PSL matches, these will be shared equally between the University and Kenilworth Squash. The partnership between the two has been fundamental to the team and PSL nights at the club have over the past 2 seasons produced very special atmospheres.

Without doubt the University of Warwick Sport and Wellness Hub will represent a huge boost to the WarKens PSL team. Steve tells me that they are already seeing an early boost to their recruitment strategy as a result, with a strong intake of first year squash players having already arrived at the University. However, he expects to see real change to the level of squash players coming to Warwick over the coming years, not necessarily this one. 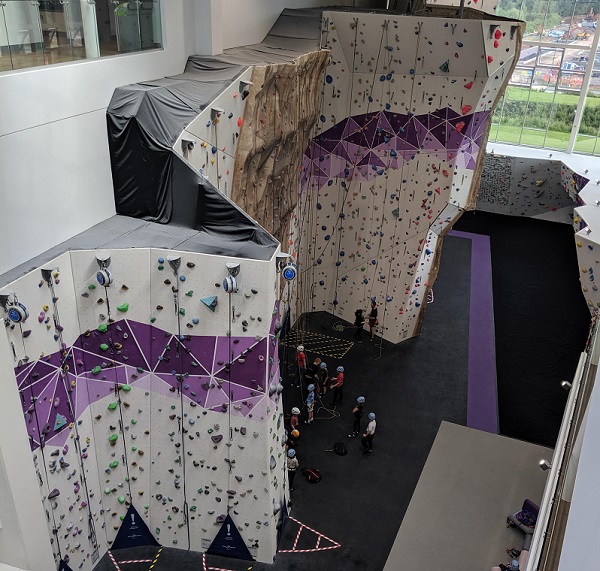 The impressive climbing wall, which the squash players will not be encouraged to use!

Onto Steve’s thoughts about his team’s preparations, plans and prospects:

JR: Firstly a bit of history. How did the PSL team come into being? Whose initiative was it and what benefits has it brought to both the university and the Kenilworth Club?

ST: Warwick has not traditionally been known as a performance sport university – more an academic one as it’s in the top 10 in the UK. A few years ago, the University realised that it would add an extra string to the bow of the University if it started to support performance sport. Squash was an obvious choice to focus on as we already had a good team and structure. Once it was decided that we were going to focus on squash, PSL was a natural next step, as a flag if you like to show we’re serious about squash and sport, to give our students something to aim at, and to inspire staff and students to be more active. I’m also the head coach at Kenilworth, and we’ve long harboured aspirations of having a PSL team, so the partnership was a very good initiative for both parties.

JR: Which players have you retained for the season and have you brought in any fresh blood?

ST: We’ve retained virtually all our players, which I’m really happy about – they continually out-perform their ranking, give absolutely 100%, which has led to our relative success for a new team. With the extra emphasis on women, we’ve strengthened in this area, adding Lily Taylor and Enora Villard to our ranks, so with Sarah-Jane Perry and Julianne Courtice, we hope to be strong in this area.

JR: After just 2 seasons in PSL, it must have been very satisfying to have topped your Division and qualified for the semi-finals last season. Equally however it must have then been heart-breaking to have just missed out on reaching the finals. Tell me a bit about how last season progressed from your perspective.

ST: It was incredible really, with many individual performances being really exceptional. The matches are so tight; we could have lost v Bristol away, with Baptiste Massotti coming back from match ball down to win the tie right at the start of the year, and that momentum carried on throughout. The fans at Kenilworth, the University and the locality have taken the players to their hearts, and they really feel part of the clubs. We were massive underdogs for the semis, and almost pipped that too. Paul Coll was a different class though! 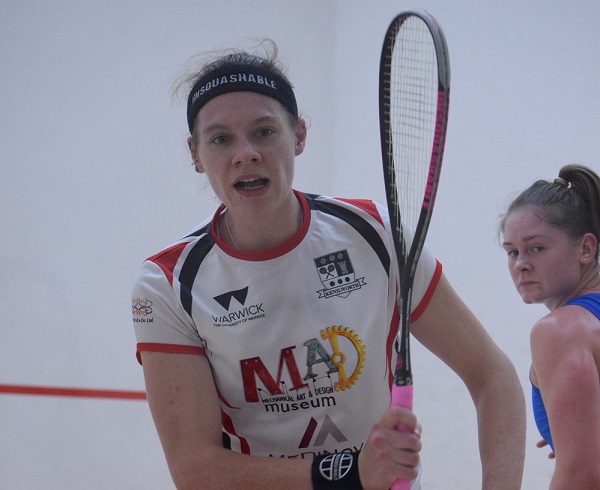 English no. 1 Sarah-Jane Perry in action last season for her University and Club PSL team

JR: I know it is usually difficult to single out players but who impressed you the most from your team last season and why?

ST: All of our players have given everything so I’m really so happy about that. Nothing is too much trouble for any of them, including getting on court with Warwickshire juniors before the fixtures, and they’ve all done anything I have ever asked of them. But if I had to single anyone out to represent the spirit of the team, I’d have to say it’s SJ (Sarah-Jane Perry), who’s both a Warwick Alumna and a Kenilworth member and is unbeaten in PSL now for 5 years – what can I add to that?! Iker Pajares has also been a revelation. He dismantled Nick Matthew and also beat Dec James, both way higher in the rankings. That won’t be for long though! The crowd love watching him – he’s rapid, but moreover, you couldn’t wish to meet a nicer, more genuine guy. 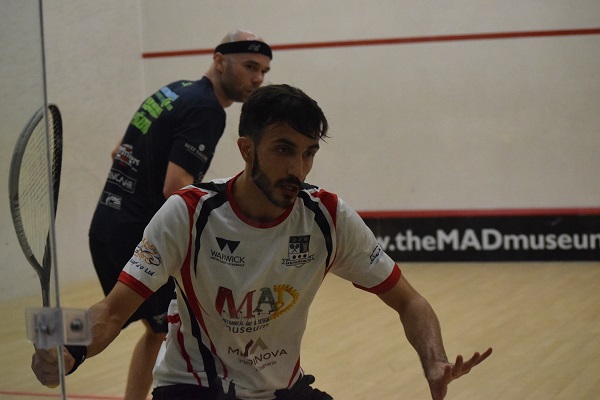 JR: Which other teams do you think are going to put in the strongest showings this season? How do you rate your chances of reaching that first final, and even taking the title?

ST: We’ve been moved to the Southern division and on paper the teams are stronger than in the North. We are playing for the right to be in the Premiership next season, so that is our primary goal – anything on top of that would be a bonus!

ST: It certainly is and we’re in touch with several potential students who have Warwick as one of their options for next season and have the potential to represent the PSL team. As far as this year goes, it’s hard to see one of our existing student team breaking into a match-day team, but they are working hard, improving rapidly and you just never know!

JR: Having played a full season using the best of 3 format, what are your views generally about this format? Do you feel it works well for PSL? What about more generally, now that we are seeing it more and more in the PSA World Tour events, in some cases right up to the semi-finals as is the case with the Netsuite Open at the moment?

ST: I like it for PSL, it definitely adds a different dynamic and produces faster-paced, more exciting rallies. When there are 3/5 matches in a row and it’s a team format, it works really well. For PSA, I haven’t been to a tournament featuring it and so I don’t have an informed opinion really. That said, I do feel for the players though, as to train for an event, fly half way around the World and then to lose 2-0 in 20 or so minutes can’t be much fun. My gut says that we should wherever possible be using the longer, purer form for the pinnacle of our sport – the PSA World Tour. 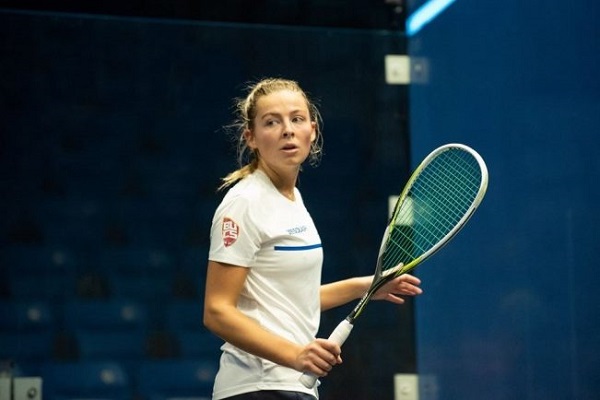 One of England’s brightest young prospects, Lily Taylor, has agreed to join WarKens this season, having previously played for Bristol

JR: What about the revised line up requiring 2 female players? Do you think this will play a positive role in developing the female professional game, as well as in promoting greater female participation in the sport generally?

ST: I think it’s a natural move along with the rest of society and promoting sport for women. It can only help develop our female professionals, but also generations of female squash players to come.

My grateful thanks to Steve for his time showing me around the new facilities and in answering my questions. Good luck to WarKens for the forthcoming season!

WarKens kick off their PSL season on Tuesday 1st October when they welcome the Welsh Wizards to Kenilworth Squash. Start time is 7:30pm. Tickets are available here: https://warwick.ac.uk/services/sport/active/squash/psl

More details about the Premier Squash League, including news, fixtures and full squad details can be obtained on the official website: http://pslsquash.com