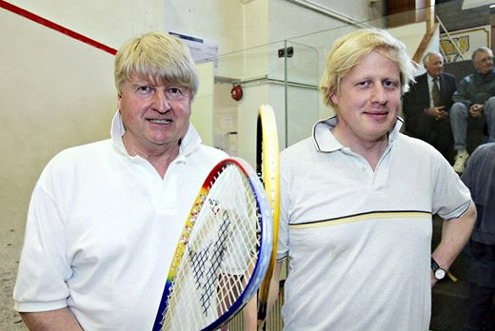 Prime Minister Boris Johnson on court with his father, Stanley

All squash clubs in the UK are expected to close to avoid the risk of spreading the coronavirus, following a government announcement today. However, one club chairman claimed the guidance was only advisory and called it a “stitch-up”.

In today’s live information update broadcast on the BBC, squash-playing Prime Minister Boris Johnson has instructed that all pubs and restaurants will need to close tonight and not reopen tomorrow.

Gyms and sports clubs are understood to be given more time to make arrangements. All the UK’s nightclubs, theatres, cinemas, gyms and leisure centres have been told to close “as soon as they reasonably can”, according to the BBC.

Today’s move follows a lack of direct instructions from the government and national federations to the sport and leisure industries.

While numerous tournaments have been cancelled or postponed, clubs were allowed to choose whether to close or remain open.

England Squash last night posted the following statement: “Following the Government’s clear guidance that leisure centres and gyms should be closed with immediate effect, squash clubs and facilities should respond accordingly and close until further notice. Please continue to refer to and follow the Government guidance for employers and businesses.

“We will look into how we can support clubs and coaches during this exceptionally difficult time over the coming period.“

To delay the spread of coronavirus, the government has INSTRUCTED some businesses and venues including all pubs, bars and restaurants to close from tonight.

Later in the bulletin, the mood changes, saying:

The following businesses and venues have been ASKED to close:

While the Chancellor of the Exchequer Rishi Sunak announced funding to help businesses to continue paying full-time staff, there appear to be no contingencies to support self-employed individuals, including professional athletes and freelance coaches.

A small number of leading squash players receive direct funding from national federations, but many rely on families and sponsors to help them pay their way to compete on the PSA Tour.

The news to close premises led to a sigh of relief from many squash club officials, who were struggling to keep members happy because of the lack of direct guidance from the government. It’s easy to have a go at the federations, but I am sure they were waiting for cues from Downing Street.

Some clubs responded instantly to the government announcement and shut down operations within an hour of the Prime Minister’s televised briefing.

However, one club official told me: “At first it seemed that we had an order and that enabled us to simply get on with it, doing what we could and should have done weeks ago. However, the guidance from the government is only advisory that we should close. It’s a bloody stitch-up!

“It looks like we have a week to sort things out. We have members who absolutely want us to shut down, and others who want to keep on playing. I just hope the club can survive the loss of revenue over this unspecified period of time when the courts, gym and bar will be out of action.

“We want to look after our squash coaches, fitness coaches, therapists, casual bar staff and cleaners. I’m not sure if the government is looking at the mechanisms to look after all of those people, short of applying for benefits.”

Today, the number of deaths from the coronavirus reached 167 in England, as well as six in Scotland, three in Wales and one in Northern Ireland.

Italy recorded 627 deaths today, the biggest day-to-day increase in the country’s four-week epidemic. Italy has been the worst-hit nation in the world for fatalities related to the Covid-19 virus, with more than 4,000 deaths in total.

Professional squash is expected to follow the lead of international tennis in extending the postponement of major tournaments. The PSA announced last Friday (March 13) that no events would take place until the end of April at least.

The ATP and WTA have announced that tennis events will be cancelled or postponed until June 7, which was scheduled to be the final day of the French Open at Roland Garros.

In a move that took the other Grand Slams by surprise, the French Open organisers announced new dates of September 20 to October 4. This is one week after the current dates of the US Open and clashes with the Laver Cup team tournament promoted by Roger Federer.

The Wimbledon tennis jamboree (scheduled dates of June 29 to July 12) must be in doubt.

The iconic British Open Squash Championships are slated for May 25-31 in Hull, with the World Junior Championships due to take place in Gold Coast, Australia, from July 19-30.

Both tournaments are expected to be in jeopardy because of the widespread effects of the coronavirus.

And don’t mention the bloody Olympics …