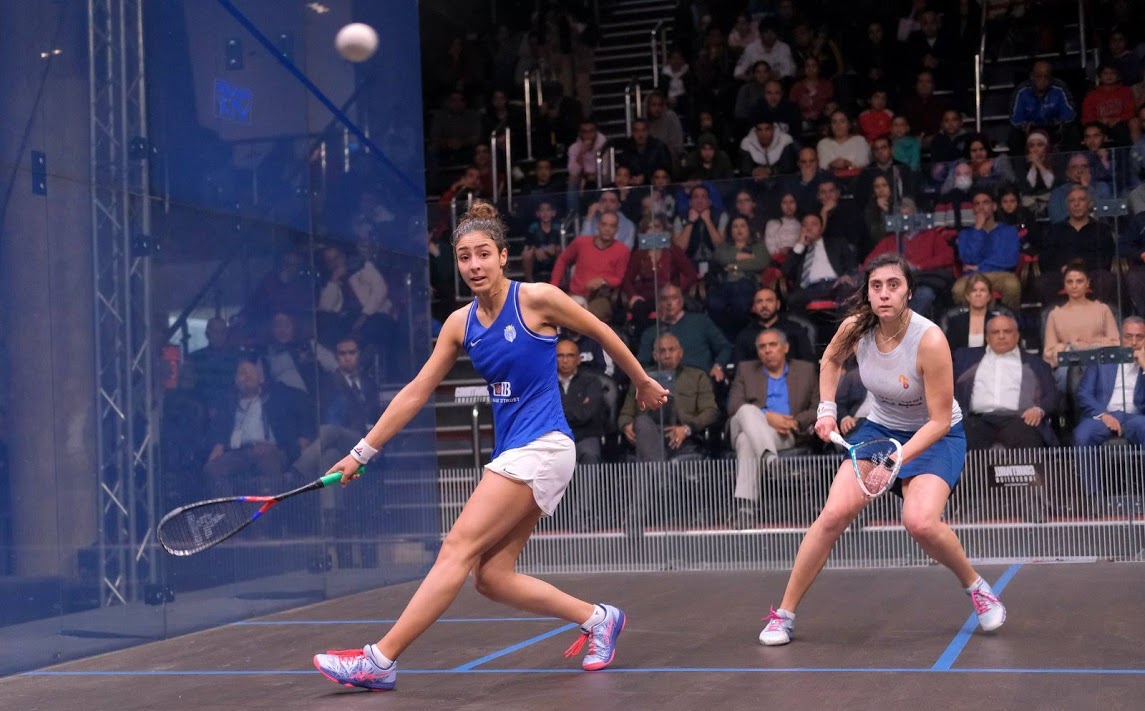 Events for local players could be staged at venues with a permanent glass court, such as the superb Black Ball Club in Cairo. In the picture, Hania El Hammamy (left) is on her way to a famous victory over Nour El Sherbini to win the Black Ball Open in the final match before the PSA’s global lockdown

The PSA are exploring all options in a bid to relaunch the World Tour as soon as possible, although it could be several more months until tournaments are back on the calendar.

PSA staff, working from home instead of the head office in Leeds, England, are having to deal with a wide range of challenges before any postponed events can be rearranged.

These issues involve international travel restrictions, possible quarantine legislation in different countries, and decisions that may affect the opening of venues and limits on crowd numbers in various territories. Making things more complicated, all of these issues could be dealt with in a variety of ways by different governments and state legislators.

I understand that, instead of competitions being open to every PSA member across the globe, one idea being discussed is to stage more “local” tournaments to reduce travel and quarantine issues.

This could lead, for example, to events being held in countries like New Zealand and Australia, where lockdown measures are being relaxed and some squash clubs have been allowed to reopen. As in the Unsquashable Series held at the XL Squash Club in Auckland, these could be for local players only for the time being.

In time, similar events could emerge in, say, Cairo or Alexandria for Egyptian players only, with other nations following this example in due course.

The Unsquashable series, like the return of football in the German Bundesliga and a handful of other countries, takes place behind closed doors.

Few events can break even without the revenue from ticket sales, and players may well have to accept a drastic reduction in prize money to enjoy returning to competitive play.

Making events easier to stage could result in televised squash tournaments being staged at venues boasting permanent glass courts, including the XL Club, the Black Ball Club in Cairo, the Khalifa Centre in Qatar, the Australian National Centre at Carrara, the Nicol David Centre Court in Kuala Lumpur, and a number of English venues, including: the National Centre in Manchester, Abbeydale in Sheffield, St. George’s Hill in Weybridge, plus the University courts at Nottingham and Birmingham. In the USA, of course, several major college facilities have all-glass show courts with permanent seating.

The PSA priority, however, remains the safety of everyone concerned with the game.

In their latest Covid-19 update, the PSA refer to the safety guidelines they have helped the WSF to produce, as reported yesterday by Squash Mad.

The PSA bulletin reads: “As we progress through the COVID-19 pandemic, and with some countries beginning to reopen their squash courts, we wanted to bring you an update on the work that has been happening at PSA as we cautiously outline a roadmap for the restart of professional squash with the restrictions that will be in place following the COVID-19 pandemic.

“The Return of the Tour: The PSA Tour is currently suspended until July and, due to a range of challenges, it is likely that the tour will return in a different format than before, at least in the early months.

“We are in the process of getting in touch with all of our promoters to discuss how and when it might be possible to hold their events. Our main focus is to ensure any restart of the tour does not compromise the health and safety of our players, promoters, fans and tournament staff.

“There are also a range of challenges to contend with, such as a lack of a known date for international travel to reopen, potential quarantine measures for international travellers and social distancing guidelines, which look set to be in place for the foreseeable future and will have a direct impact on event logistics, spectators and revenue.

“We are exploring all available options to ensure we can return to competitive squash and are working with a number of different scenarios in mind, including the potential for tournaments behind closed doors, as well as future alterations to the PSA Tour calendar based on international travel opening up later in 2020.

“We plan to issue a further update on our plans for the restart of the tour at the start of June.”