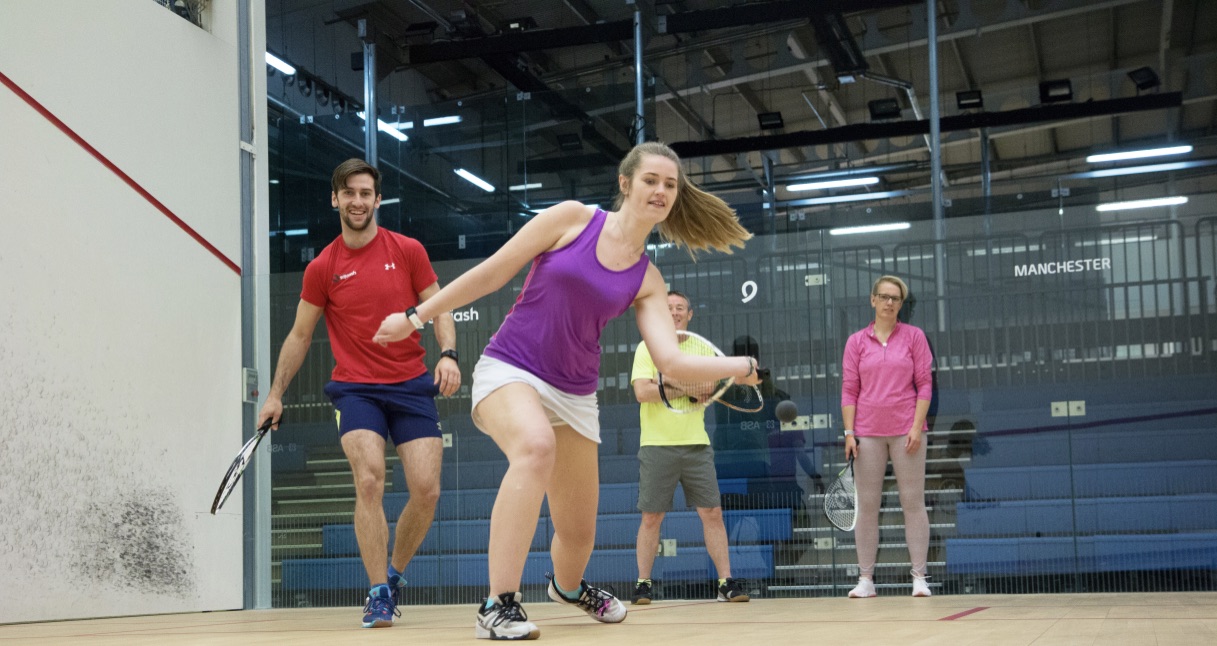 Mark Fuller, founder of UK Racketball, has wide ranging plans to increase the numbers of people playing the game once squash clubs are fully open for business following the Coronavirus lockdown.

He is partnering with England Squash to produce a range of resources to help clubs and coaches bring new people through the doors to try racketball.

For many squash facilities in the UK, the popularity of racketball is helping to keep clubs alive. Underscoring this trend, several clubs were reporting more court bookings for racketball than squash before the lockdown. This is true even at some clubs that have invested heavily in promoting their own squash academies.

The benefits of racketball are very simple: a bouncier ball makes it an easier game for beginners to pick up. This is especially true when more than 90 per cent of squash players are using the wrong ball anyway.

Many a time I have seen an average club standard club player bring a friend along during the winter months and introduce them to the game on a cold court with a double yellow dot ball.

For ageing players, or anyone carrying an injury, racketball is less demanding on the joints. However, the longer rallies will often give you a much better workout than a squash game with two or three-shot rallies.

UK-Racketball, in collaboration with England Squash, have added a new development section to the www.uk-racketball.com website and one that is designed specifically to help grow the sport.

The development section aims to collect resources and ideas to help clubs build their racketball sessions and membership numbers.

Fuller said: “We already have case studies from the sports’ leading clubs, session ideas from coaches, promotional plans and marketing resources. All of the material is free to download and use at clubs, on websites and social media. We hope that this will help the sport to grow to new heights of popularity.

“While undertaking the research for this section we came across some amazing statistics and articles on the benefits of racket sports. Most of us know that a study by Forbes concluded that squash was the healthiest sport. Less well known is that an NHS study in 2016 and numerous national newspaper articles which concluded that playing a racket sport was better than any other form of exercise to extend your life expectancy.”

We covered this in some depth on Squash Mad with an article about the study, that examined information on more than 80,000 adults across England and Scotland who took part in annual health surveys between 1994 and 2008.

Fuller added: “As the articles show, it is beneficial to take up a racket sport at any age and at any level of fitness. We are hoping to show how important it is to spread the word about racketball and start conversations with squash coaches about the place for and benefit of racketball. Many clubs and governing bodies around the world see racketball as an exit sport for squash and not one to be grown from the grass roots.

“Large parts of the squash world are missing out on the real potential that racketball has. Squash is one of, if not the most intense physical sports in the world. This is why so many of us love it but we have to remember that for some people the barriers to play squash for the first time are high. Squash has a reputation for being tough. It’s a reputation that many of us are rightly proud of. As the saying goes ‘you don’t play squash to get fit, you need to be fit to play squash’.

“If someone doesn’t feel that they are very sporty, however, it might prove a challenge to get them to try squash for the first time. The racketball ball is bigger and bouncier. The result is that it travels less quickly through the air and you have longer to reach the ball before it bounces twice. This results in much less of a strain on the body than any other mainstream racket sport.

“Everything about racketball is designed to be as easy at the start as possible. You bounce the serve; the racket is short with a huge head. Racketball’s tag line is a game that is “easy to play but hard to master”.  I challenge anyone to find a racket sport that is easier for beginners to pick up than racketball.”

I have encountered a lot of squash “snobs” who have looked down their noses at racketball, including one dimwit of a club chairman who thought he was being clever to deliberately block the game’s development. I would challenge any of them to watch Harris, Vail or Mulvey slug it out for two hours and not be impressed by the quality and movement involved.

Mark and I have already held some interesting discussions about inviting professional racquetball players from the Americas and Australia to play in some new events being planned here in the UK.

The major difference between our version and what is popularly known as “American racquetball” is that we play on a squash court, with a tin. The game that has several million followers throughout the Americas, and a sizeable following in Australia, has no tin and players often look for a quick winner by hitting the nick that joins the front wall and the floor, known as a “roll-out”.

The Christmas card from the IRF (International Racquetball Federation) shows the best way to avoid being hit by the ball as the guy at the back aims for a high-paced roll-out shot! 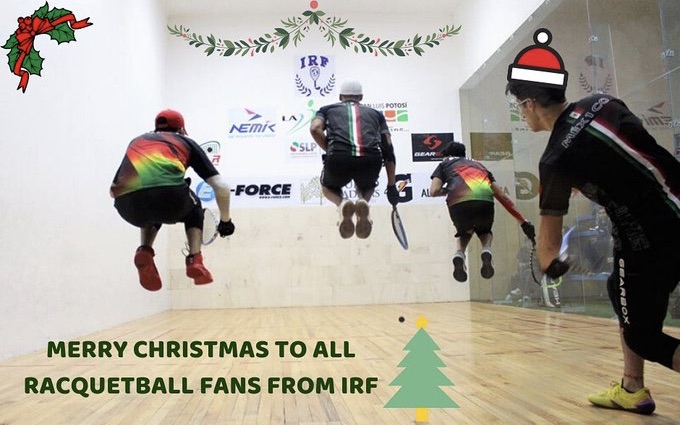 A standard racquetball court is rectangular: 40 feet long, 20 feet wide, and 20 feet high with red lines defining the service and serve reception areas. A singles squash court is 32 feet long and 20 feet wide. Mark and I are also discussing varying the tin heights for racketball to enable more attacking play.

Mark added: “The emergence of top-class squash players entering some of the major tournaments proves that racketball is not just for beginners or older players.

“Anyone who plays the game to a high level will tell you that the better you play, the longer and more dynamic the rallies become. This is not just a great exit sport for squash.

“If marketed and well run, racketball can also be a fantastic introduction to the squash world with clubs able to engage with new players that they might have previously struggled to attract.

“UK-Racketball has now run over 75 events across the country including a very successful Inter-County Championships and the largest National Championships in the history of our sport in 2019. We need your help to spread the word about the development project and help to persuade as many clubs as possible of the real benefit that an active racketball section can have.

“Any players who go to our website, complete a short survey of 10 questions and promote the project on social media, will automatically be entered into our prize draw.”

Anyone requiring any more information on the development project can contact Mark Fuller at: [email protected]