Alan Thatcher November 5, 2013 No Comments on Ramy seeks to rescue his career

From the Qatar Peninsula 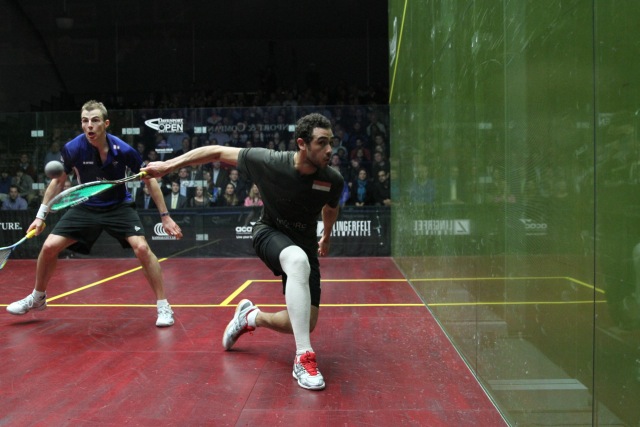 Ramy Ashour, the brightest talent and the most popular player of the past two decades, has vowed to return home to Cairo to find a way to rescue his career.

The 26-year-old Egyptian’s superb 18-month unbeaten run came to a disastrous end on Saturday at the World Championships when multiple leg injuries forced him to retire against England’s Nick Matthew in the semi-finals.

Not only did this cost Ashour his world title and deny him the 50th successive win of his career, it cast further clouds over his future, and left him with another uphill task to regain the physical condition to cope with an increasingly explosive modern game.

Ashour has, by his own admission, already made one last chance rescue of his career.  Repeated injuries decided him to make three-hour flights to the Aspetar centre at Doha in Qatar which has some of the best sports science facilities in the world.

The treatment and advice he got there has made a dramatic difference to his fitness and did much to lift him from world number five last November to the most successful year of his career, and to a stardom which no male squash player has had for a long time. Now Ashour quietly acknowledges that he may have to do something similar – and maybe more.

“I will go to the hospital,” he said. “I will go back for the 25th time and reassess everything and find a way of coming back again.”

That may not only involve prolonged treatment, an even more disciplined rehab course, and daily physio regimes, but perhaps the appointment of a personal fitness coach or a travelling physiotherapist, or both.

“I have been doing everything on my own,” he admitted, but now to prolong a career he may consider measures which would eat into his income at a time when, through no fault of its own, the Egyptian squash association has a much reduced ability to help him.

Some time ago he was told that he had “fatigue in the hamstring”, which keeps returning, he says.

He has also been playing with crepe bandages from crotch to knee on both legs for many months, and this week received a great deal of physio treatment, ice, acupuncture, and pills to quell the pain.

“I have been living on anti-inflammatories,” he claimed.

Because of this semi-permanent problem, he had been “pushing from the leg far too much, and that’s not the right way to do it,” he said.

It was this which had brought about a compensatory injury in the calf, he suggested, during a hard match with Cameron Pilley of Australia in the third round on Wednesday.

“There is no certainty I can do anything to make it go away,” he concluded.

Ashour may need more science and more discipline than ever before if he is to recover. In the meantime he is also taking strength from spiritual qualities.

“I am not the only one,” he concluded.

“There are other players who have struggled and they trained hard as well. So I am not alone.”

On Sunday, Matthew clinched his third world title by overcoming Gregory Gaultier in a marathon final.