An Egyptian quartet will feature in the finals of the Oracle NetSuite Open 2019, as Raneem El Welily, Nour El Tayeb, Mohamed ElShorbagy and Tarek Momen were all victorious in their semi final clashes in San Francisco.

El Welily and her husband Tarek Momen will be looking for their first joint title success to follow the example set by Ali Farag and his wife Nour El Tayeb in the US Open two years ago.

World No.2 Mohamed ElShorbagy was the victor over his younger brother, Marwan ElShorbagy, in the most anticipated match of the night, advancing to the final for the third consecutive year.

The siblings had met 16 times on the PSA World Tour, with the older brother Mohamed holding the 13-3 advantage, and he continued that momentum into the first game, as he restricted the World No.11 to just four points.

The second game had more ups-and-downs in it, as Mohamed took a 3-0 lead, before Marwan reeled off five straight points to lead 5-3. Mohamed then did the same to lead 8-5, before the pair became deadlocked at 10-10 as Marwan saved two match balls.

The tie-break would go all the way to 17-15, with neither player giving an inch to their sibling on court. Mohamed eventually took the victory with his seventh match ball, booking his place in the final against compatriot Tarek Momen on Monday evening.

“I am really happy to reach the final for a third consecutive year. It is not easy and it is a very different tournament this year with the best-of-three,” Mohamed ElShorbagy admitted. 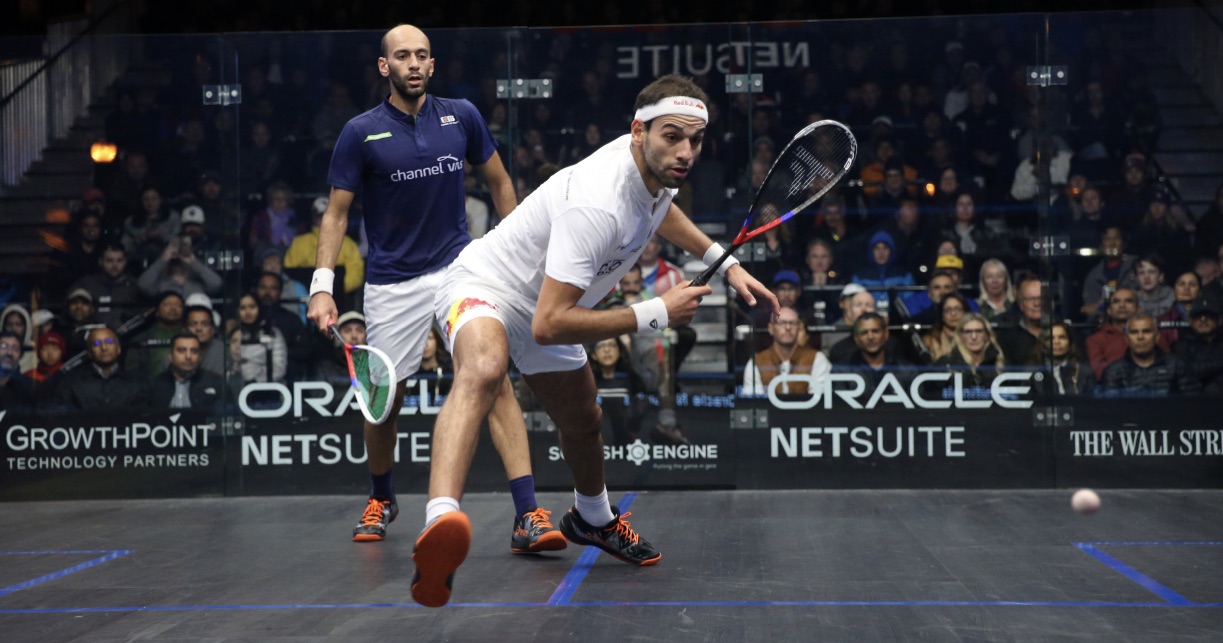 “You have to play with a very different tactic for each match. Matches are short and sharp, especially in the colder conditions. I am really happy with how I played and I always think the top guys have a way of adapting and here we are, myself and Tarek, the top two seeds are in the final together.

“Tarek is one of the most inspiring players I have ever come across because he has worked on himself year on year. He was a very good junior, you expect things to happen once you go to the pro tour. That did not happen with him, but he kept working hard until it started happening for him and I respect that a lot about him.

“We are good friends off court, but we go hard at each other on the court and that is what everyone will want us to do tomorrow and hopefully we can give everyone a good match.”

Momen completed his path to the final with a polished performance against the spirited Colombian Miguel Rodriguez, winning 11-6, 11-3 in just 23 minutes, meaning he will have plenty of energy left for tonight’s showdown. 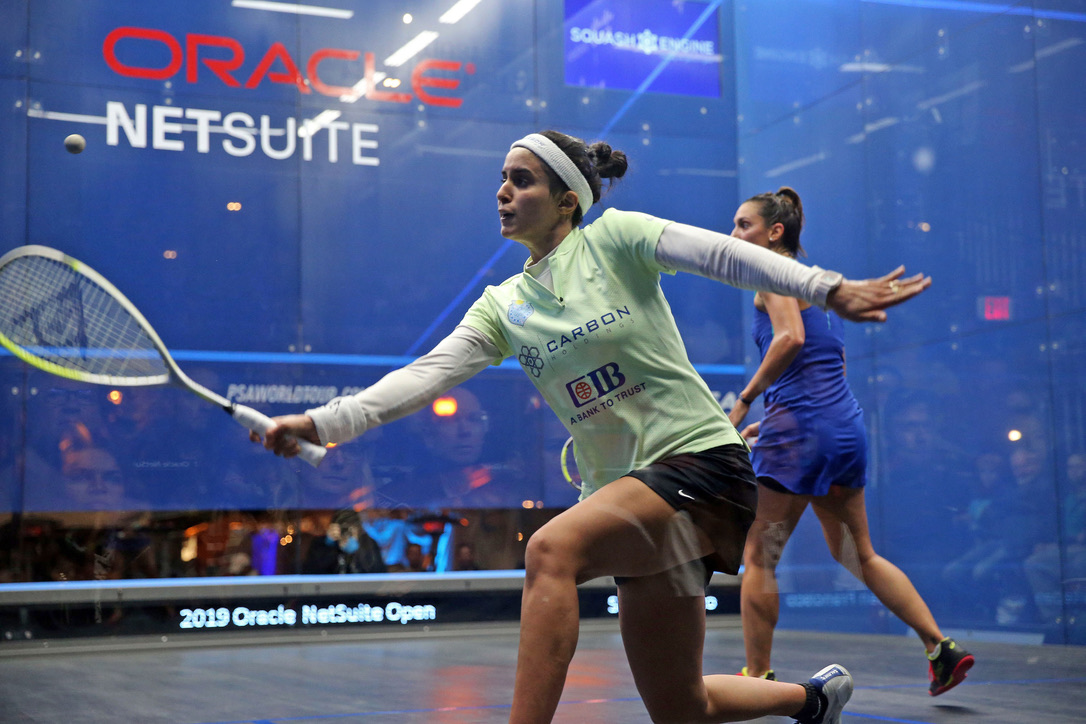 Nour El Tayeb wears an extra layer of clothes in the cool San Francisco evening as she beats No.3 seed Camille Serme

In the women’s draw, World No.5 Nour El Tayeb caused the only upset on the glass court at Embarcadero Plaza, as she defeated World No.3 Camille Serme in three games to reach the final of the Oracle NetSuite Open.

The pair had met 11 times on the PSA World Tour prior to this clash, with El Tayeb holding the 6-5 advantage coming into San Francisco, after winning their last encounter at the Tournament of Champions in New York in 2018.

This battle between the pair started off in a very tight fashion, with neither player able to break away. However, it was the Egyptian that eventually broke loose, winning the last four points of the game to take it 11-7.

Serme came back fighting in the second game, moving out into a quick-fire 6-2 lead. El Tayeb managed pull herself back to within a point, but the Frenchwoman had enough firepower to take it 11-7, forcing a decider.

The third game was always under control for the Egyptian, though, as she got an early lead and never looked like relinquishing it. The World No.5 secured the victory in just over half an hour, booking her spot in a second consecutive final to start the 2019-2020 campaign.

“First of all, it is nice to win a match on this court. I haven’t been here for the last three years, so I am happy to come out with a win in the semi finals,” El Tayeb admitted.

“I have played a lot of squash over the last couple of days. I played for an hour this morning. I just wanted to have a little bit of soreness, like Camille, who was probably feeling a little bit sore from yesterday.

“I wanted to feel a little bit of that soreness this morning and to feel like I have muscles, you know. I have been resting for over 48 hours without a match but it was worth the wait.” 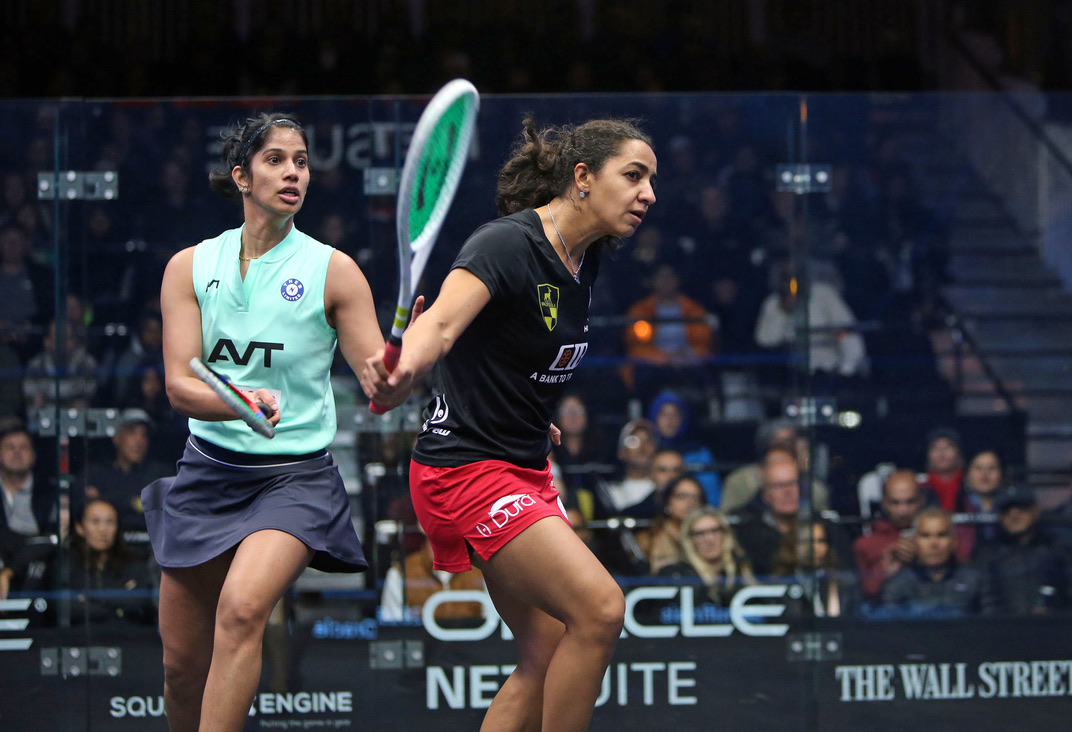 El Tayeb will face World No.1 Raneem El Welily in the final of the Oracle NetSuite Open after she defeated India’s Joshna Chinappa in just 14 minutes games in the last match of the evening’s action.

The Egyptian won 10 of the first 12 points and although Chinappa saved three game balls, El Welily took it 11-5. She found herself trailing in the second at several points, but the World No.1 was able to fight back to take it 11-7 to finish the match off in quick time.

El Welily will face compatriot Nour El Tayeb in a repeat of the China Open final form earlier this month. The World No.1 will be looking for revenge after El Tayeb took victory in Shanghai.

She admitted: “I am happy to be in the final again. I have had good results so far and hopefully I can go one further tomorrow. It is still too early to think about that but I am happy with how I played today.

“I have been playing with Joshna since we were kids, we go way back. She has always had those killing shots out of nowhere and she can play them at any time. Obviously, I was prepared for a strong opponent, but I just had to be sharp today.”

As for her hopes of a double success for husband Tarek and herself, she added: “It feels good. We are just enjoying our time, trying to give our best on court. It is not about making it to finals, just trying to give it your best.

“Nour is playing well so far this season and she has had good results to start it, so obviously it will be a tough match, but I am going to be prepared for sure.”