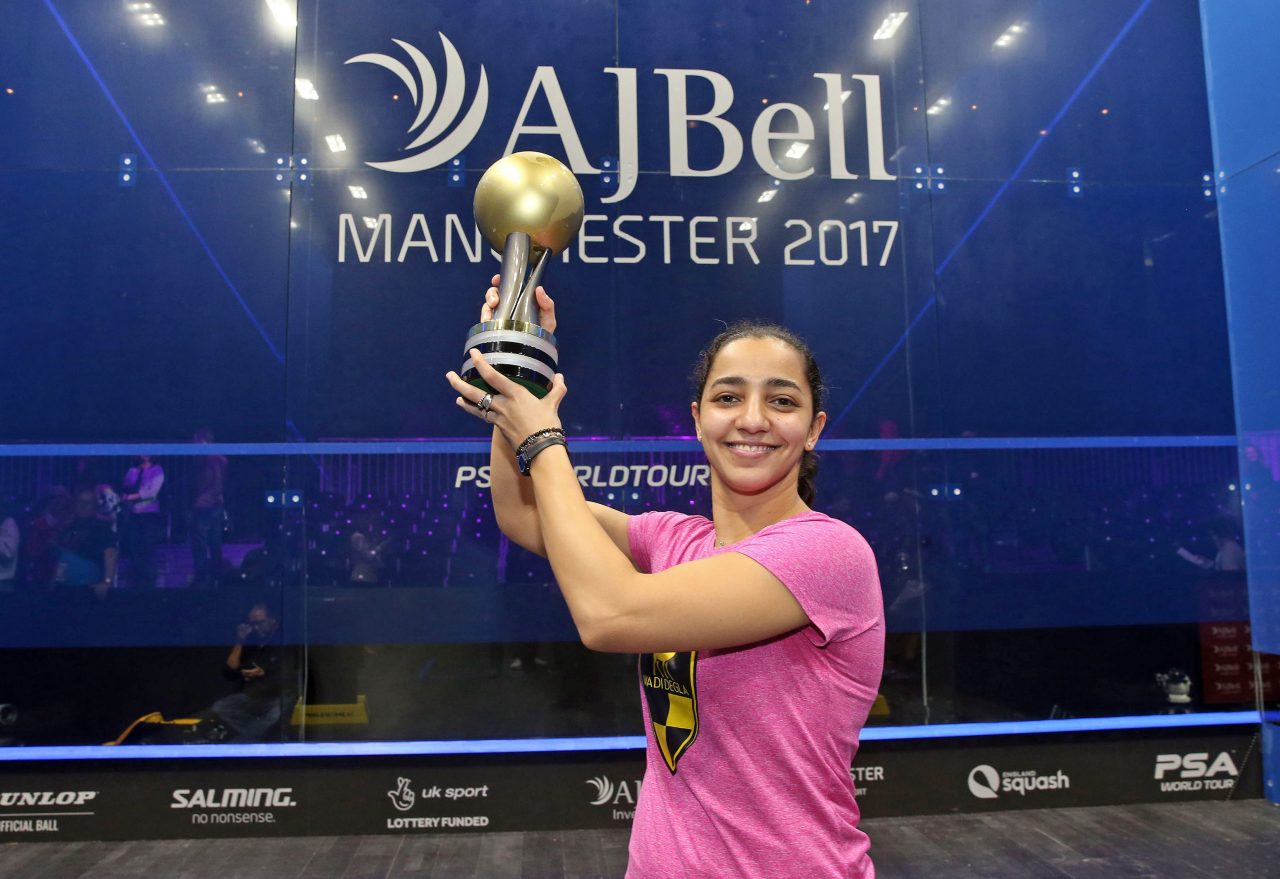 World number one Raneem El Welily, one of the most talented and successful players in the history of squash, today announced her immediate retirement from the game.

The 31-year-old Egyptian, who is married to current men’s world champion Tarek Momen, posted a personal message on social media before the PSA media machine swung into action.

In her statement, El Welily said that “starting a family with Tarek is a priority for us”.

El Welily and Momen have both one world individual title to their names, Raneem winning the 2017-18 final and Tarek following six months ago with his triumph in Qatar.

With the game in lockdown since March, when El Welily lost to Nour El Tayeb in the quarter-finals of the Black Ball Open in Cairo, Raneem has spent the past three months at home in the Egyptian capital with her husband.

Her retirement brings to an end a phenomenal 18-year career that saw her capture a total of 24 PSA titles, highlighted by the 2017-18 PSA World Championship triumph in Manchester.

Her successes, mainly alongside Nour El Sherbini in the women’s game, have established Egypt as the dominant global force in squash, with her husband part of the “Fab Four” along with Mohamed ElShorbagy, Ali Farag and Karim Abdel Gawad to bring men’s world titles back to Egypt.

As well as bringing huge pride to a nation wracked by the stresses of the Arab Spring uprising in 2011, the successes of this astonishing group of female Egyptian players have shown a new way for Muslim nations to embrace female participation in sport.

El Welily, who in 2015 made history by becoming the first Arab female in any sport to become World No.1, ending Nicol David’s record nine-year reign atop the World Rankings in the process, spent a total of 23 months at the summit of the rankings list – including the past 19 months.

After claiming the World Junior Championship in both 2005 and 2007, the biggest win of her senior career came in Manchester in 2017 when she defeated Nour El Sherbini to win the World Championship at the third attempt – after losing out to Nicol David in 2014 and to El Sherbini in 2016.

“For the past year or two I must have written these words in my head over a thousand times. Squash has been my life for the past 25 years, but the time has come for me to say goodbye,” El Welily said.

“What a ride it has been. When this journey started, I never thought that it would take me this far. I have been so fortunate to have witnessed many generations play the game, to have been inspired by so many legends, and to have been a part of such a great era.”

A member of Egypt’s World Team Championship winning side on four occasions, El Welily entered the history books again in 2019 after husband Tarek won the 2019-20 PSA Men’s World Championship in Doha – making them the first married world champions in any sport, a feat recognised by the Guinness World Records earlier this year.

“I want to thank everyone who helped and supported me throughout my career, starting off with my heroes and my number 1 fans – my parents,” said El Welily.

“Tameem, my brother, whom I always struggle to find the right words for. Thank you for always being there, in every possible way. A manager, a coach, a friend and of course a brother.

“Over the years I’ve trained with many coaches, and I’ve always considered myself so lucky to have crossed paths with a number of talented, experienced and passionate coaches whom I had the chance to spend time with and more importantly learn from.

“In 2010 I started working with Haitham Effat, my squash coach, and I’ve probably been playing squash through his eyes ever since then. He has been my guide on court and it is through his talent and vision that I was able to reach my best, time and time again.

“My strength and conditioning coach, Ahmed Faragallah, who since 2009 has managed to keep me fit and strong.

“Mohamed Amin, the most talented physiotherapist I have ever worked with, who I crossed paths with by mere coincidence when I rolled my ankle during the 2014 Worlds. Dr. Hani Wahba, my nutritionist, and Ms. Hala Metwally my masseuse, for all her energy-boosting sessions.

“I would also like to thank my sponsors; Harrow and Mark Kayden, Wadi Degla and Karim Darwish, CIB and Hussein Abaza and Abu Qir Petroleum, for their faith in me as an athlete but most importantly as a person.

“My fellow players and Egyptian team-mates, it has been a wonderful journey. Thank you for all the wonderful memories – I will really miss you. And a huge thank you to the fans and supporters all over the world for all your love and appreciation. You guys are the essence of our sport.

“And last but obviously not least, my wonderful husband – traveling the world with you and getting to share this journey with you has been a huge blessing. I hope you’ll keep shining in squash for a very long time.

“I don’t know what the future holds for me career-wise, but I do know, that starting a family with Tarek is a priority for us. And whatever challenges life may throw our way, I hope that I will be ready to face them.”

El Welily’s retirement means that current World No.2 Nouran Gohar will replace her fellow Egyptian as the new World No.1 on July 1.

FOOTNOTE: Readers are invited to share their tributes to Raneem El Welily in the Comment section below.