World number 16 Simon Rosner hailed his final victory at the Alwatan & Asnan International as ‘the best win’ of his career, after upsetting top seed Borja Golan in straight games at the inaugural $50,000 Kuwaiti event.

Rosner’s last victory on the PSA Tour came at the Santiago Open over 14 months ago, but the German number one ended his barren streak with a comprehensive 11-4, 11-5, 12-10 success in 65 minutes at the Late Sheikh / Salem Alsabah International Squash Complex in South Surrah.

I’m incredibly delighted to have won a tournament of this category, with a $50,000 prize-fund,” the jubilant Rosner said afterwards.

“Especially beating Borja, the man in form at the moment, is something very special to me. “He is a good friend of mine and we had some really tough battles in the past, fortunately I came out on top of him today. He has had an unbelievable year and I would like to congratulate him for that.

“I can’t describe the feeling. It’s the best win of my career, “There were 6 PSA titles before – but this is by far the most valuable win. Also I thought that I couldn’t have played much better today against Borja, really pulled out my best squash of the year at the last tournament which makes it very special for me! 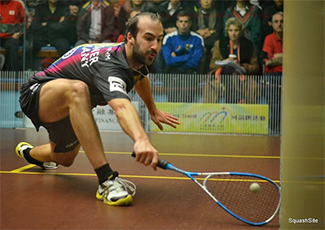 Meanwhile, Golan was left to reflect on a mixed end to 2013, with two successive final losses punctuating his rise to a career-high seventh in the latest world rankings.

Despite holding a superior head-to-head record over the German, Golan had lost their last two meetings and never looked like avenging those defeats as the 26-year-old Rosner (pictured right) raced into a 2-0 lead.

Golan, who lost in the final of the Hong Kong Open to Nick Matthew earlier in the month, finally awoke from his slumber in the third game but despite forcing a tie-break, Rosner overpowered the Spanish number one to record his seventh PSA Tour title.

Can't describe that feeling. Won 3:0 against @golansquash in #kuwait. Thats the best win of my career. pic.twitter.com/iYtQyu9psx