‘S no problem for the amazing US Junior Open staff

Richard Millman December 16, 2013 1 Comment on ‘S no problem for the amazing US Junior Open staff

Herculean, if not downright Olympic, efforts by the US Squash tournament staff at the Black Knight US Junior Open saw a return to play today, after a clean up delay at 1pm.

Despite having the schedule emaciated by the winter weather, Harry Smith and his unstinting band of helpers produced a highly professional rejig of the tournament with very, very few cancellations and, from what this correspondent heard and saw, no complaints and little discomfort for most of the nearly 900 hundred participants who were still involved late last night. 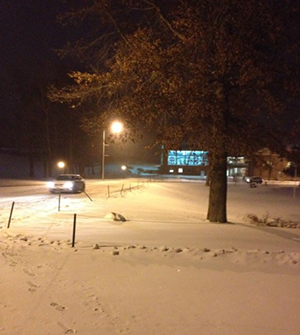 The staff worked through the night with regular email updates at 11pm, midnight, 5am and 7am to all concerned – ensuring that players, referees, parents, coaches and officials had the information they needed.

I spent my day between Yale’s Brady Center and Choate Rosemary Hall and in all my travels I only heard of one logistical misdirection – pretty impressive considering yesterday’s turmoil and the rescheduling necessary.

Some courts did run considerably behind, but that is always going to happen when certain courts are given specific schedules and enthusiastic participants take consecutive matches to five games.

My day started much as the previous day had – with happy reunions with some of the giants of the game.

I walked in the door at Yale and within five minutes was greeted by another of our very special people here in the US – Yale head coach for the past 23 years – Dave Talbott.

I have known Dave for almost 20 years and in that time I have seen Wall Street Big Wigs walk into his office and metamorphose back into the undergrad of so many years before as talk of ‘the old days’ has brought a nostalgic tear to their eye in the presence of the man known as ‘Dave’ or ‘Coach’ to so many that have been fortunate to benefit from his watchful eye.

Not five minutes later, I was in mid-conversation with my dear friend Stu Legassick, legendary Scot and Head Coach at Brown, about another extraordinary player when our coach and mentor – Gail Ramsay (Hall of Fame member and Head Coach at Princeton) – joined us looking no different to the day I met her in 1995.

But such is the importance of the US Junior Open, it was time to turn our attention to the overwhelming amount of action on view.

In the Under 19 boys, there has only been one upset at the time of writing as Endo Tomotaka from Japan went down in four games to Muhammad Hashimi.

The Under 19 Girls saw a number of upsets. The Under 17 Boys has seen the early departure of the number one seed, while the U17 Girls has seen mixed results for the seeds.

Despite the best efforts of the roaming qualified referees, the degree of cynical attempts to bully or persuade junior referees into giving unearned points is very disappointing.

The seeding committee have been largely spot on with the Under 15 Girls and Boys, while they may have been better off with a coin toss in the Boys U13 and the top half of the U13 Girls clearly got the memo that the bottom half didn’t!

You might be forgiven for thinking that seeding U11 would be a lottery – but not a bit of it – pretty much everything went to form.

The quality of the Squash on show is enthralling. Every year Junior Squash players are benefitting from the evolution of the game as a whole and as talented coaches interpret and streamline their understanding of the game, the kids themselves observe and interact with more and more creative and original players. 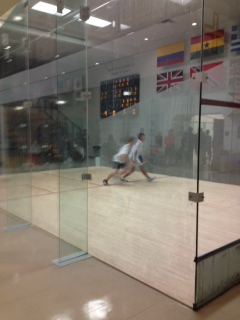 As impressive as the control, athleticism, deception, width and length and strategy are in the play, what is not so impressive is the incessant attempts to win points by conning the referee, with fishing expeditions repeatedly demeaning the spirit of the game.

Despite the best efforts of the roaming qualified referees, the degree of cynical attempts to bully or persuade junior referees into giving unearned points is very disappointing.

Where does it come from? Well, the tree of knowledge doesn’t discriminate on the morality of the information it makes available and the internet with PSA SquashTV and Youtube allow all of us to see the behavior of screaming shouting World Tour players when they are at their least endearing and the kids soon pick up on that.

How much are our coaches attempting to squash this behaviour? Hard to say, since the focus on winning rather than performing is clearly driving the financial base of the game.

Sad to say I have seen more than a few coaches clearly coaching during play – ranging from surreptitious gesturing to wild unconcealed direction and yelling. With all best intentions, a few roaming officials cannot hope to control what is obvious adult cheating and what is worse – impressionable children are clearly getting the message that anything goes as long as the end justifies the means.

Attention to detail is what is going to make our sport stand the test of time and all responsible authorities from personal coaches to national coaches must step up and maintain standards.

Equally important is refereeing and marking attentively. Tournament staff have had to deal with an unacceptably high number of slapdash marking sheets being returned with no clear indication of the winner, the name of the referee and sometimes additional imaginary games added for good measure!

It’s easy to sweep this all under the carpet, but we who are involved in the development of the games must make our charges take notice – lest we hand our precious game on to future generations in shoddy untenable condition.

But I don’t want to allow these important though minor irritations to distract from the main news item: US Squash did sterling work today and the world’s biggest junior squash event is back on track for its next two days of exciting competition, featuring as yet little known players, some of whom will one day without doubt become household names.

I am sure as we get down to the nitty gritty of the last two days, the squash will be the main conversation and not the lax behaviour.

To see the up to date results, click here