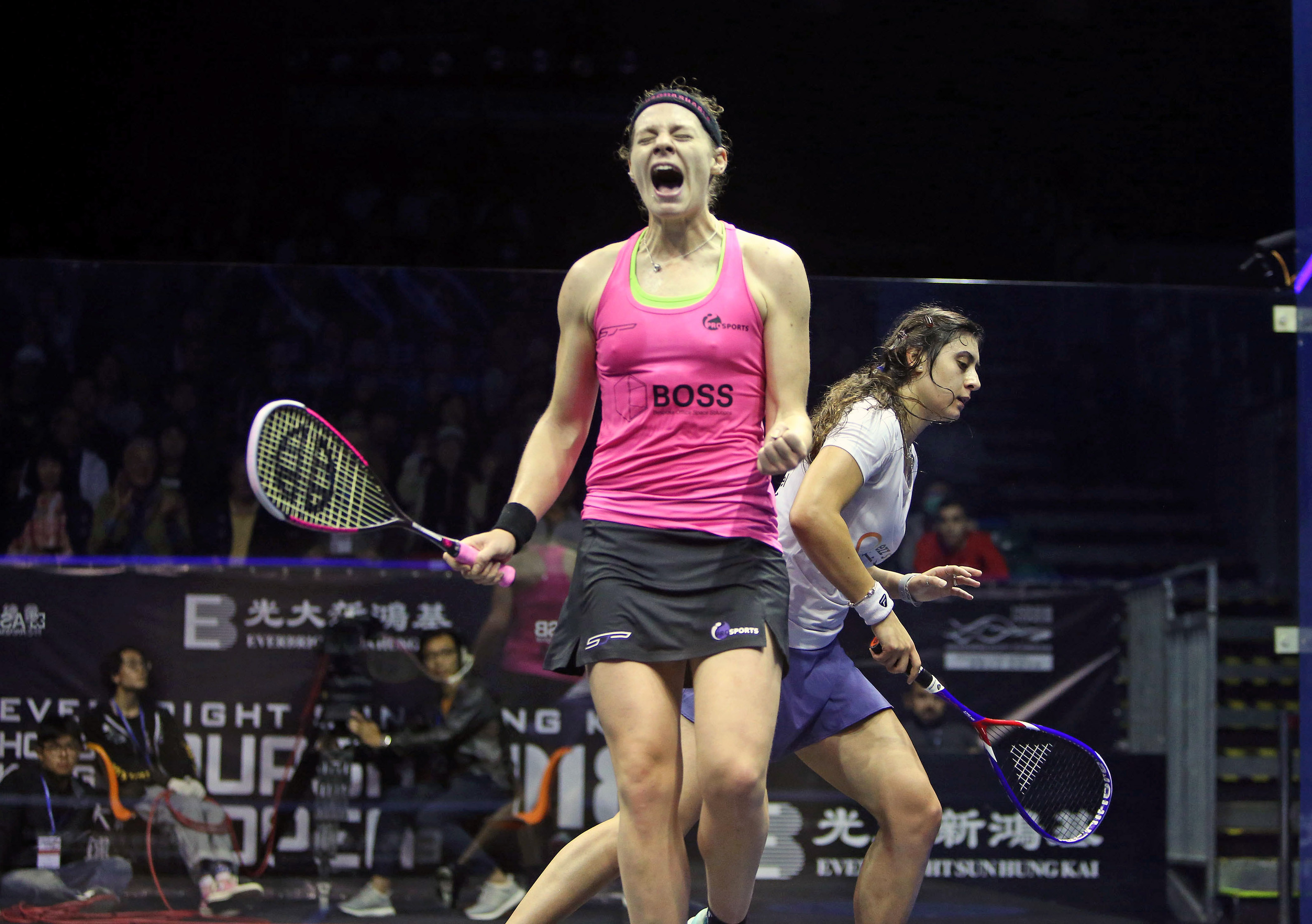 Reigning World Champion El Welily became the first Egyptian female in any sport to be crowned World No.1 when she brought the legendary Nicol David’s unprecedented nine-year run atop the rankings to a close back in September 2015.

Speaking after an 11-2, 11-8, 11-6 victory over local favourite Joey Chan, El Welily said: “In my head, I always thought it was going to be a match between me and her [El Sherbini] that decided who would be World No.1. I didn’t actually have the scenario in my head that she could lose early on or that I could lose early.

“As much as I am sad for her loss today, Sarah-Jane Perry played really well and I’m really happy to be back at World No.1. I’m trying not to think about that too much at the moment because I’m still in the tournament and I still have a match tomorrow to prepare for. Maybe when the rankings come out next month then I can celebrate.” 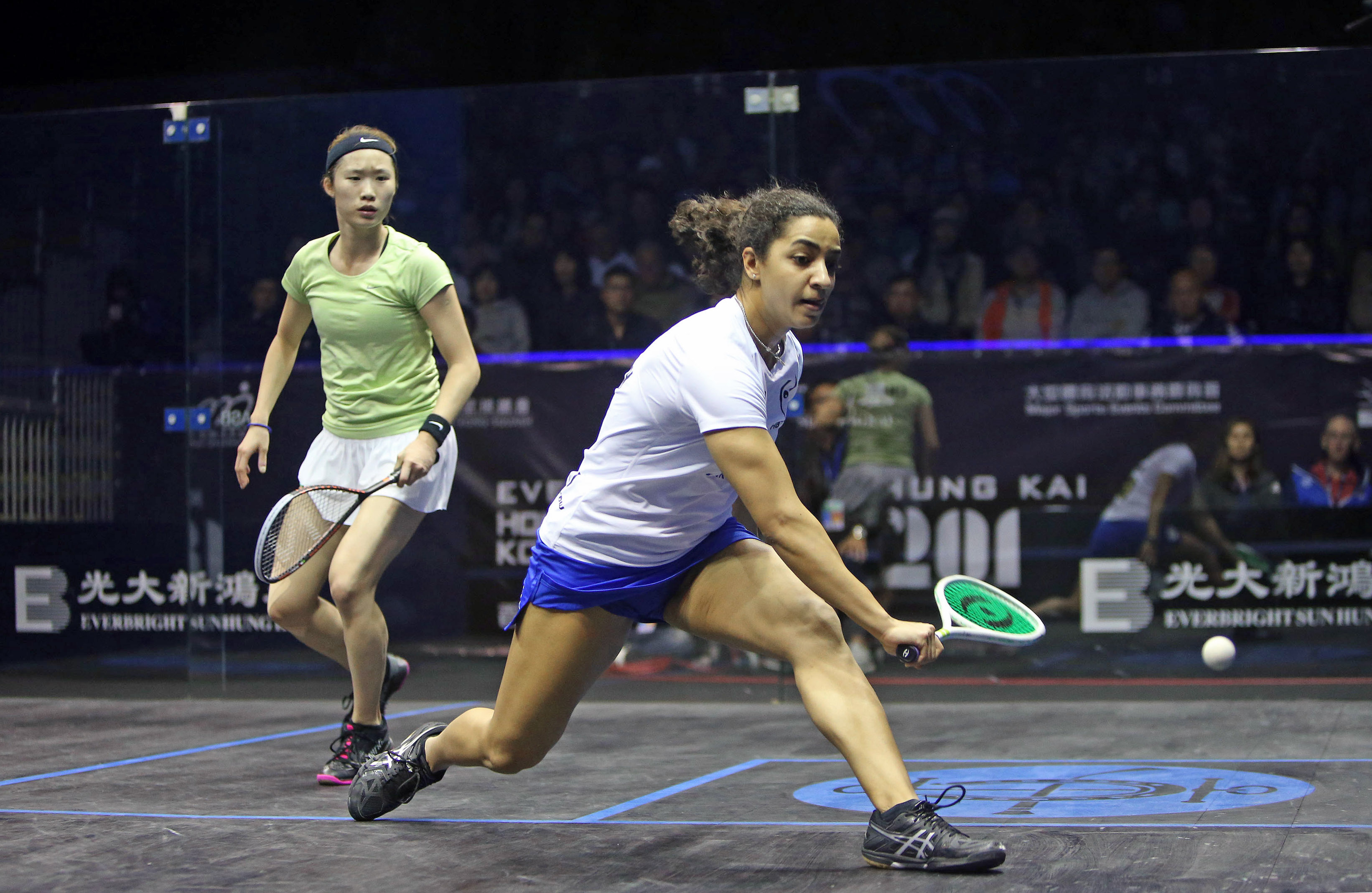 Raneem El Welily is mobile around the court against Joey Chan

For her part, El Sherbini battled hard to keep her grasp on the coveted No.1 spot intact, but fell victim to an astonishing display from World No.6 Perry, who fought through the pain barrier to claim her first ever win against the Egyptian over a best-of-five games format.

Perry was 2-1 down when a collision with the side wall in the opening point of the fourth game looked to have caused damage to her shoulder as she took just two of the next eight points on offer.

However, a resilient Perry drew on her mental reserves and the 28-year-old reined the two-time World Champion back in to draw level, before putting in an immaculate display to power to victory in the fifth, earning a 7-11, 11-7, 11-13, 11-8, 11-5 victory to end El Sherbini’s title defence.

“I’m absolutely thrilled,” Perry said. “Nour is an amazing player. She’s the World No.1 going into the match and she’s earned that. I’ve beaten her before but not in a best of five and so to beat her 3-2, I’m really pleased.”

Perry will take on New Zealand’s World No.7 Joelle King in the next round in a repeat of their Commonwealth Games singles final match on the Gold Coast in April, with Perry losing that match by a 3-2 margin. King eased past World No.3 Nour El Tayeb in just 28 minutes.

The 2016 champion, Nouran Gohar, was the other winner in the women’s event after a 3-2 victory over Camille Serme and she will play El Welily for a place in the title decider.

A titanic battle between German World No.5 Simon Rösner and Colombia’s World No.7 Miguel Angel Rodriguez lit up the men’s draw, with the former claiming a 3-2 victory after 99 minutes of high-intensity action.

Both players wowed spectators at Hong Kong Park Sports Centre, with the fifth and final game lasting 39 minutes alone. Each player held four match balls over the course of the decider, with an error from Rodriguez finally bringing an end to the spectacle as both players walked off court to a standing ovation.

Rösner, who is one win away from a third successive Platinum final, said: “It’s an incredible feeling. It was a really good match from both of us, especially the fifth game – that’s one of the best games I’ve ever played.

“I’m really pleased with my form at the moment. If someone told me four months ago that I would be reaching three semi-finals at major tournaments, I would have laughed at them. It’s a huge achievement for me and whatever comes now is a bonus.”

World No.2 Ali Farag also moved through to the semi-finals after he came back from a game behind to beat former World No.1 Karim Abdel Gawad 3-1 to ensure that he will play the German for the third time this season. Rösner beat Farag in October’s U.S. Open semi-final, but Farag avenged that defeat in the Qatar Classic final earlier this month. 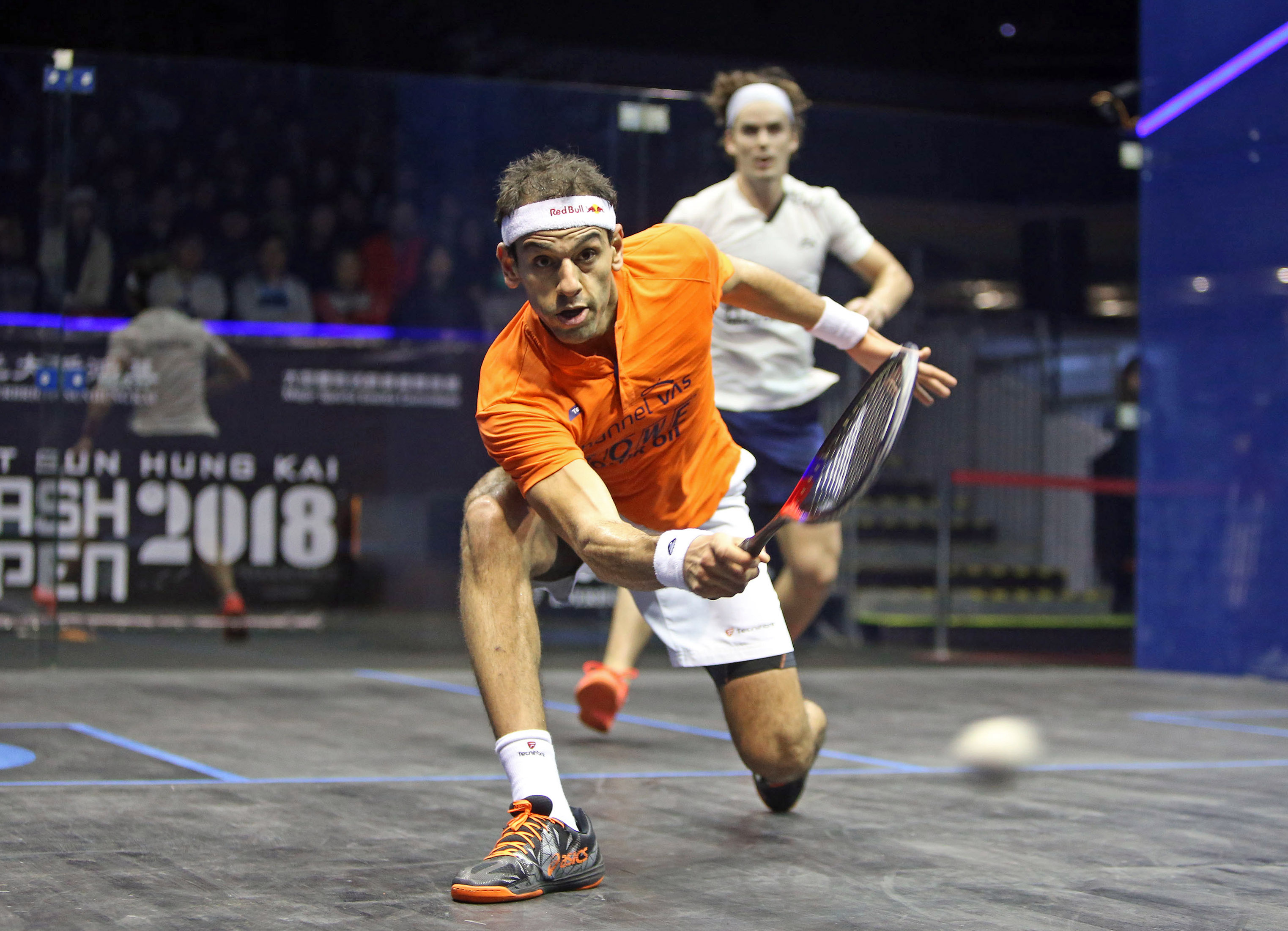 Meanwhile, defending champion Mohamed ElShorbagy overcame New Zealand’s Paul Coll by a 3-1 margin and he will play World No.4 Tarek Momen for a place in a fourth Hong Kong Open final.

“I love it here, I’ve put my name on that trophy three times and I would love to get my name on it again,” said World No.1 ElShorbagy.

The Hong Kong Open semi-finals begin at 16:00 (GMT+8) on Saturday November 24. Action will be shown live on SQUASHTV (Rest of World), Eurosport Player (Europe only) and by major broadcasters such as BT Sport, beIN Sports, Fox Sports Australia and Astro.