Guest Contributor April 17, 2020 1 Comment on Scotland international Harry Leitch on life on the front line in fight against Covid-19 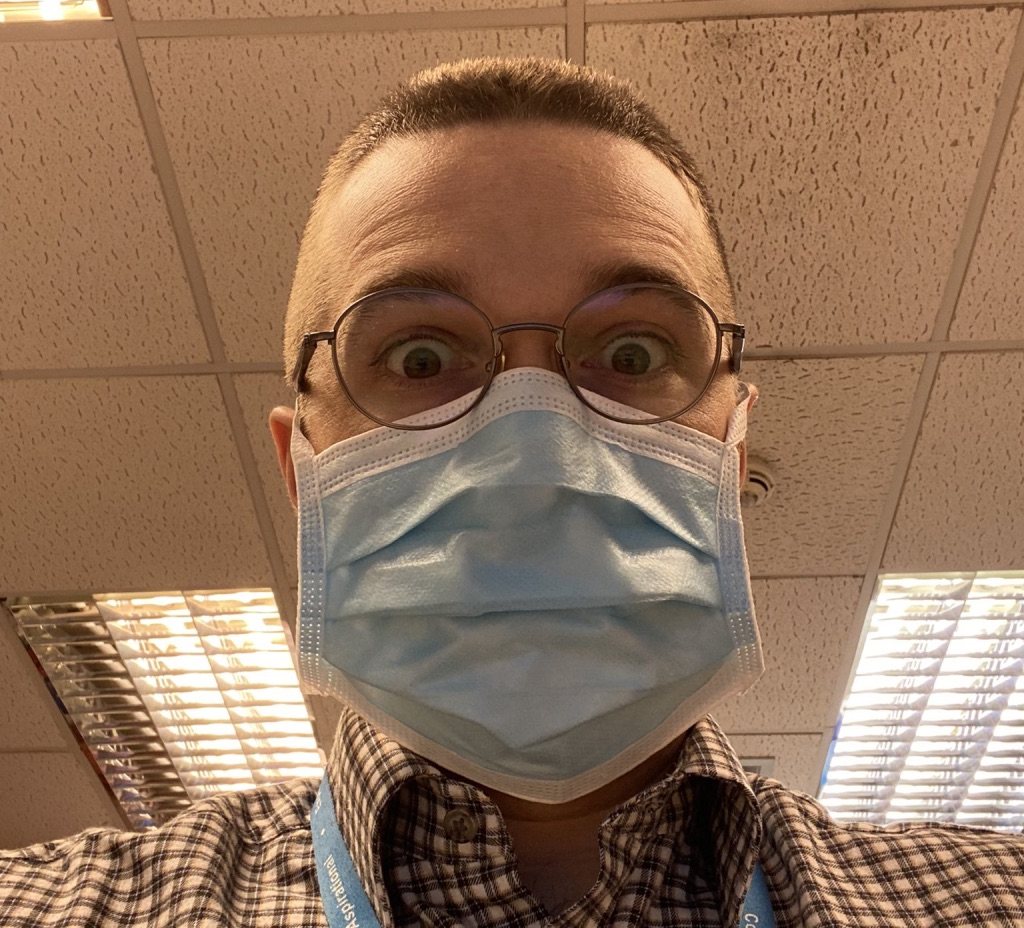 Harry Leitch wears a face mask on the ward

‘Every death is a tragedy, but some are close to home’
By HARRY LEITCH – Squash Mad Special Correspondent and NHS Hero

Scottish international Harry Leitch was one of the stars of the 2014 Commonwealth Games in Glasgow as he and team-mate Alan Clyne reached the semi-finals of the men’s doubles. Watching Harry hammering crosscourt nicks was a memory to savour as every point they won was cheered to the rooftops by passionate, packed out home crowds. Now he is working on the frontline at two London hospitals, fighting to control the effects of the Covid-19 pandemic.

Thanks for your invite to give you an insight into how the COVID-19 crisis has affected me.

I guess a few of your readers might remember me as a grumpy Scot, who cracked a few forehands and did some damage on the doubles court. However, these days I spend my time as a clinician-scientist. This means I split my time between clinical practice and running a research lab.

Clinically I started training in paediatrics/neonatology and then subspecialised in Clinical Genetics about a year ago. In research, I head the Germline and Pluripotency lab at the MRC London Institute of Medical Sciences, on the Hammersmith Hospital campus – doing a mixture of stem cell biology, developmental biology and epigenetics.

My lab studies how cells of the early embryo can develop into all the different tissues in the adult body. In particular we are interested in the cells that establish the germline – the precursors of sperm and egg.

These are the most important cells in your body, as they pass on the genetic and epigenetic information to the next generation. Our focus is on fundamental, discovery science but our work does have important implications for medically important problems – such as infertility and paediatric cancer.

Since COVID-19 struck, I have kept my Clinical Genetics work going, although most clinics are over the phone for the time being. In addition, I volunteered to give up my academic time to return to the Neonatal Intensive Care Unit (NICU), where I will work between St. Mary’s Hospital and Queen Charlotte’s & Chelsea Hospital as a neonatal registrar.

Although babies and children seem to be overall less severely affected by COVID-19, some do still become unwell.

There are also many staff who are ill or self-isolating. In addition, neonatal doctors have to attend deliveries from COVID-19-positive mothers, if the baby requires resuscitation or is premature – which perhaps explains some of the transmission to staff in this specialty.

I’m also helping out on the paediatric bone marrow transplant ward at St Mary’s, where I previously worked for six months in 2018.

So I’m essentially 100 per cent clinical at the moment, although I still have twice weekly meetings with my lab on Zoom, and try to catch up with them all individually, too.

A nice thing about going back to old haunts is catching up with colleagues who I worked some pretty tough shifts with, and from whom I learned a lot. I’ve also helped with a few genetic diagnoses already – so i’m using my current day job too. I’ve been back a few weeks now, and I’m enjoying it.

The hospital is a different place at the moment, and the staff are being pushed to their limits.

However, I’ve been really impressed with the support shown – both by the public and by lots of companies.

I’ve often heard the Clap For Our Carers echoing in through the hospital windows, and I’ve enjoyed free or cheap rides to work with Uber and Ola, had free food from Leon, Pizza Hut and Innocent Smoothies, and lots of other kind donations. 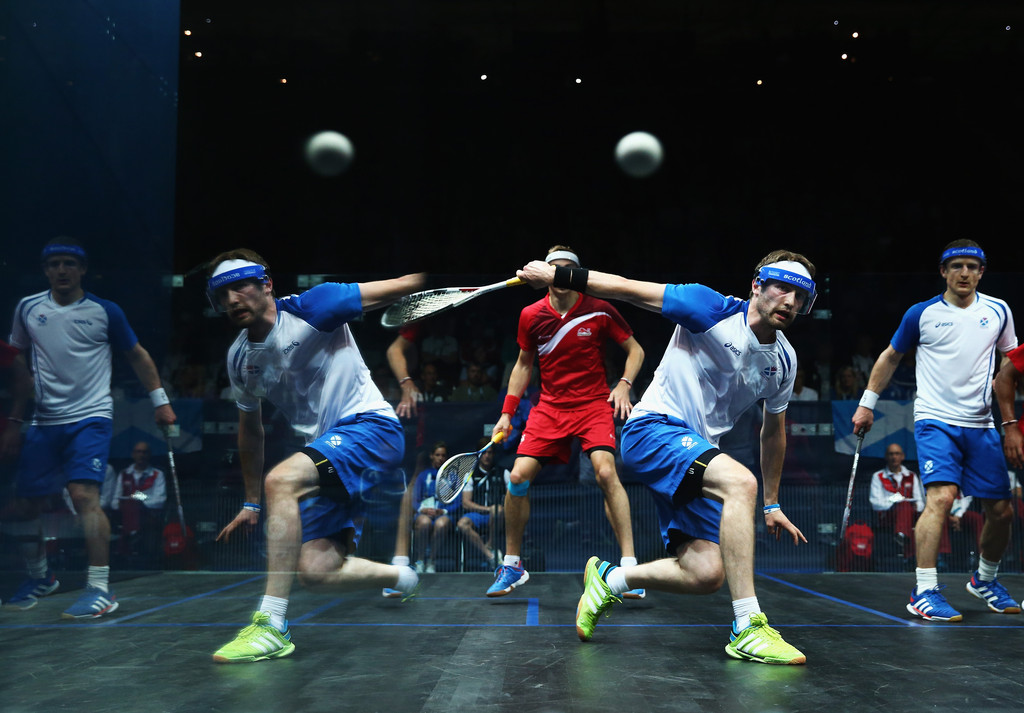 In some ways the NHS staff are lucky as we get to go to work and make a contribution. However, it is tiring and daunting not knowing how long this will last, and obviously we are high risk for catching infection. It’s been difficult to see the stories of healthcare workers dying – every death is a tragedy, but these in particular feel very close to home.

I also worry about the members of my lab stuck at home, and it is frustrating that our work is on hold. I guess this is a similar feeling to the squash community, just as they are anxious to train and get back on court, we are desperate to get back in the lab and take our projects forwards.

One plus is that when I am stuck in the house, I’ve found it easier to find time to do my rehab. I had spinal surgery last year for two prolapsed discs, and I’m now working my rehab into my routine.

I’d love to get back on court too when all this over. In fact, I contacted Joe Lee, who gave me some excellent pointers too – as he’s done well to get back following what sounds like a similar injury.

It’s also been awesome to see messages from squash friends on Twitter and Facebook – it really does pick you up when you’re working nights or have had a tough day.

And I know these are all people who understand what it means to have to push yourself, even when you are tired and things aren’t necessarily going your way.

“Harry Leitch is one of those annoying sorts of people. At an age where most people struggle to fill their LinkedIn profiles with what little they have achieved in life, he has a whole Wikipedia page devoted to his accomplishments. With a Cambridge medical degree supplemented by a PhD intriguingly titled ‘Pluripotency and the germline’, he is currently continuing his research in epigenetics and stem cell biology at the MRC Clinical Sciences Centre on the Hammersmith Hospital campus. He is also a Scottish international squash player and holds the honour of having represented his country at three Commonwealth Games (twice finishing fourth in 2010 and 2014), three World Team Championships and six European Team Championships. Worst of all, he is also eminently likeable.

EDITOR’S NOTE:
Please leave comments below for Harry. A lovely guy and a true hero.