Alan Thatcher May 15, 2020 1 Comment on Scott Fitzgerald: How squash returned in Italy

Scott Fitzgerald and his pupil wear masks as he returns to coaching on court in Padova, Italy

Scott Fitzgerald, a vastly experienced Welsh international who is now head coach at the Padova club in Italy, is happy to be back on court – albeit with a host of rules and regulations to comply with.

With the infection rate in Italy now reducing significantly, the authorities have agreed to relax various coronavirus lockdown levels.

It’s great to hear from Scott and I am delighted that he is happy to share all the sanitation protocols with our Squash Mad audience as other parts of the world wait their turn to get back on court.

Scott is a former PSA player and represented Wales at two Commonwealth Games. He is now a Level 3 International Coach and Director of Squash and Head Coach of 2001 Team Padova, Italy.

2001 Team Padova is a three-court facility in Padova, a competitive and social squash club that has multiple teams in national competitions and has tournaments both for federation players and for social players.

So in Italy, there seems to have been a bit of a breakdown as to who can give the sport (squash at least), the all clear to resume.

We have the national government and ministry of sport, which informs people, clubs and organisations as to the guidelines of how a sport can continue.

On Monday of last week, our Regional President of Veneto, produced a different statement saying sports were given the all-clear providing it can be done in a safe environment and with a minimum of 2m distance if not a solo sport, but for people over 14 years of age. That allowed my club’s tennis and padel programs to open up again, but only for a certain level.

I spoke with the National Squash Federation on Tuesday morning to discuss if it was possible for me to resume squash in my club given the fact the regional president gave the all clear, but I was told I would have to do so at my own risk as the National Federation were not responsible.

I looked into the policies of different countries, spoke with some friends of mine and, importantly, with a doctor client who has been working on the front line of the city hospital throughout the Covid outbreak.

I then came up with a list of regulations which were presented to my owners and were well received. After making sure all the necessary things were in place, we opened the next day.

The summary of restrictions for the first week were: 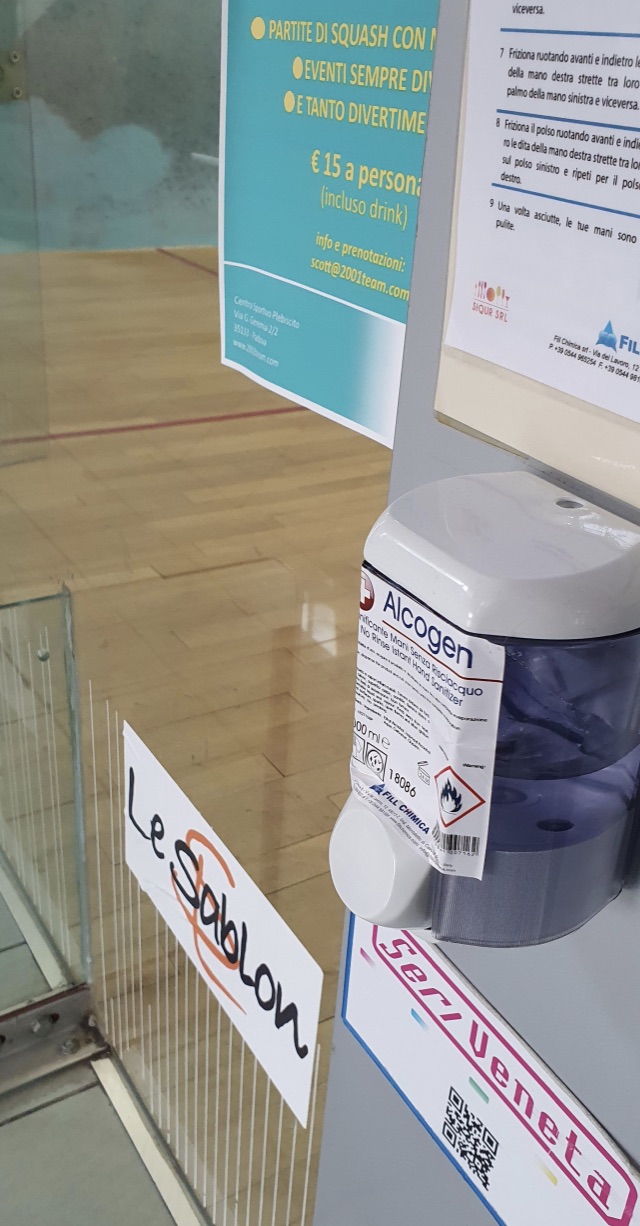 Hand sanitizer outside of the courts (people must use frequently).
Changing rooms are closed so players must arrive ready and leave sweaty.
Only individual lessons with the coach unless 2 people are from the same household.
Players must arrive wearing a mask and gloves.
Players must enter the club through one door and exit through another.
Only the coach can open the court door, and touch the ball.
Players must not touch the walls.
Exercises can be carried out with a minimum of 2m distance between player and coach.
Coach must always wear a mask.
Lessons are 45 minutes but have become 60 mins to allow time for a player to leave and the next player to arrive avoiding each other.

For week two, we opened the courts for solo practice as well as an individual lessons. We added the restrictions of:

Solo practice can only be done when the coach is present so I could control the safety.
A glove must be worn on non-playing hand because of opening the door.
Courts can only be booked and pre paid on the app used for reservations.

The next phase will allow players to partner up and perform exercises but with the 2m distance followed shortly (we hope) with allowing a full return to normal squash – projected for June 1.

So far in general, it has been well received. Some people immediately booked lessons, others are waiting until squash can feel normal again. One thing is for sure, it is a nice feeling to get back inside that box and hit the ball around once more.

Fingers crossed with the restrictions we took in Italy and the warmer weather arriving, this Covid virus will disappear (which seems to be the case) or at least until winter arrives again, and then who knows, maybe we will have to close the courts once more. We hope not.

Hope this has given you some info. Stay well and take care. We all hope we can start social squash and tournaments again soon.

EDITOR’S NOTE: Thank you, Scott. Great to see you planning things so thoroughly and taking the initiative to get the game moving again in Italy.