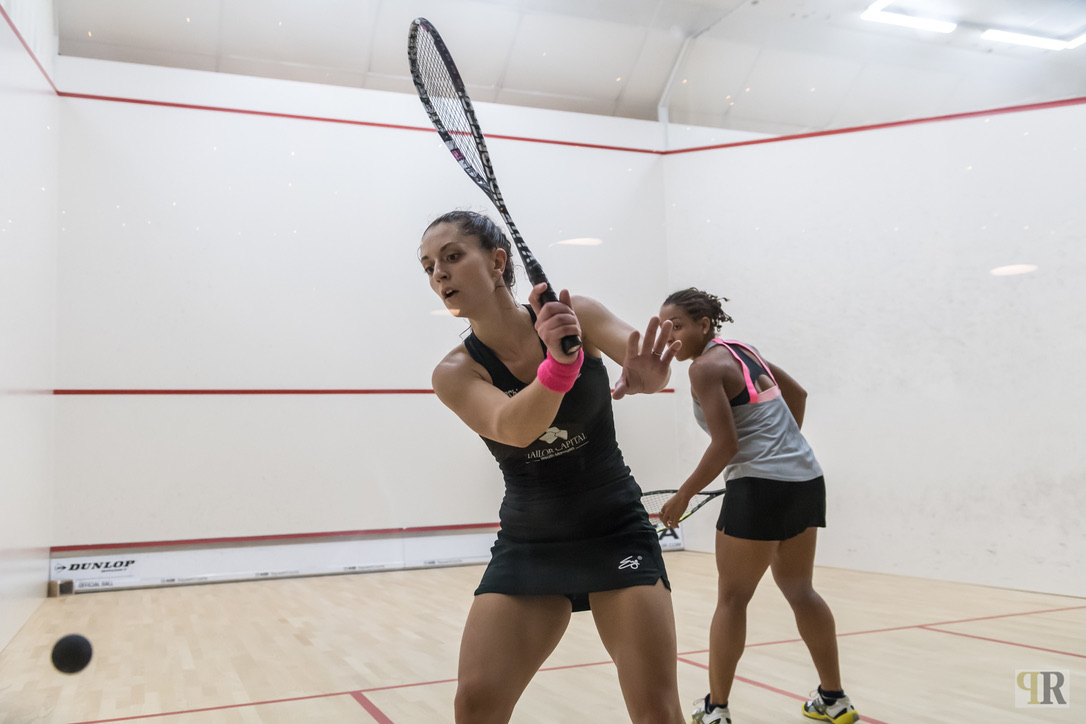 There was a major English shock as France’s Benjamin Aubert and Enora Villard have made the most of their wildcard spots, as they both won their first round matches at the Open de France – Nantes 2019 presented by Tailor Capital at La Maison du Squash.

World No.56 Enora Villard kicked the PSA Silver event off with a surprise victory over Belgian World No.27 Tinne Gilis in straight games, in the best-of-three format being trialled in Nantes.

The Frenchwoman, ranked 29 places below her first round opponent in Nantes, took an early lead in the first game, one that she would not relinquish.

She did the same in the second, moving out to a 6-2 lead at one point. Although Gilis looked like fighting back at times, Villard battled through to take her place in the second round, beating the Belgian for the first time in her fledgling career.

“The physical side of things played an enormous role today. I was always a fighter, but I was lacking a bit on the speed and the explosivity sides of things. And although I would pick up a lot of shots, I would be a bit late on the ball and not be able to act on them,” Villard said. 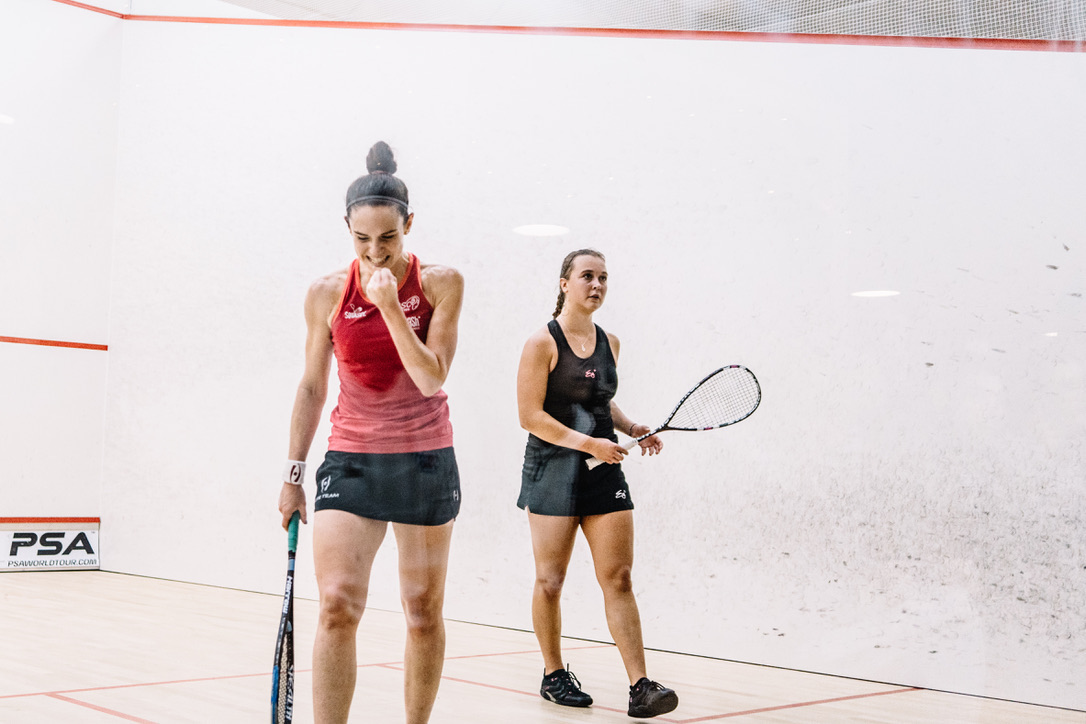 Enora Villard (left) is delighted with her victory

“But now, I managed to get early on the ball, and it gives me more choices, and the feeling that I can pick up much more. Those three months of preparation with my coaches, who invested a lot of time and effort in me, really paid off. I felt a bit more pressure today but Philippe reminded me that she is still the favourite, and that I shouldn’t feel I had to win. That helped to keep me relaxed.”

Meanwhile, World No.90 Benjamin Aubert produced the victory of the afternoon as he downed Germany’s World No.27 Raphael Kandra in a mammoth three-game battle.

The pair duked it out for 59 minutes at La Maison du Squash, with all three games reaching a conclusion in tie-breaks, as the Frenchman came back from a game down to win.

Kandra, fresh from winning the European Individual Championship, took the first 12-10, but Aubert fought back, winning the second 13-11 to force a decider. Both men had match balls, but it was the Frenchman that came out on top. 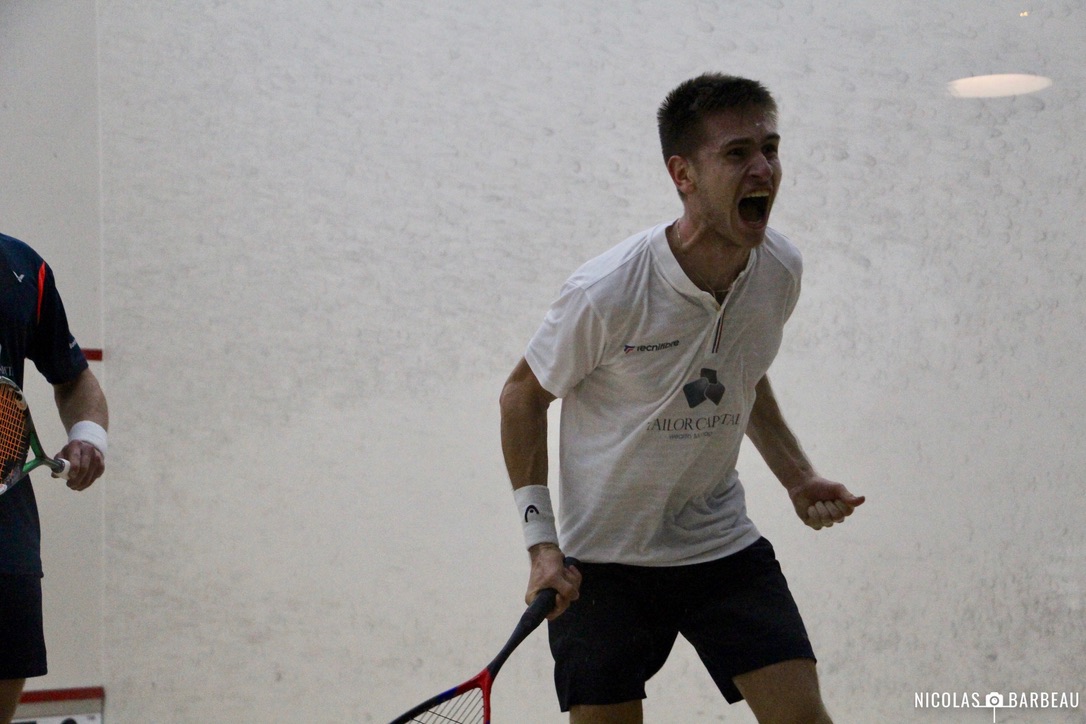 Benjamin Aubert shows his joy at winning through in Nantes

“At the start I was just petrified with pressure. I couldn’t see the ball leaving his racquet, and was finding it difficult to read his left hander shots,” Aubert admitted.

“But I managed to come back, and lost only a close game, that put me back in the game I have to say. The next two will be a bit lucky at times I feel, it was maybe down to the one that wanted it more.

“I was aware he was coming back from Bucharest and the European individuals. And also, I was so honoured to have been awarded that wild card, I wanted to make them proud, and I hope I managed to do just that.”

Mathieu Castagnet and Coline Aumard also made it through to the second round, with the pair both having to survive scares in their first round clashes.

Aumard faced off against compatriot Melissa Alves for a place in the last 16, and it was all going well after she won the first game. However, Alves came back into the match, reeling off a string of points to win the second. The World No.33 went on to secure victory after battling back in the third game, booking her place in the second round, and setting up a clash with the tournament’s No.1 seed, Camille Serme.

Meanwhile, compatriot Mathieu Castagnet lost the first game of his clash against India’s Ramit Tandon on a tie-break, only for the Frenchman to fight back, eventually taking the honours after 47 minutes. He goes on to face reigning champion Declan James on the wonderful glass court at the Chateau des ducs de Bretagne on Tuesday evening. 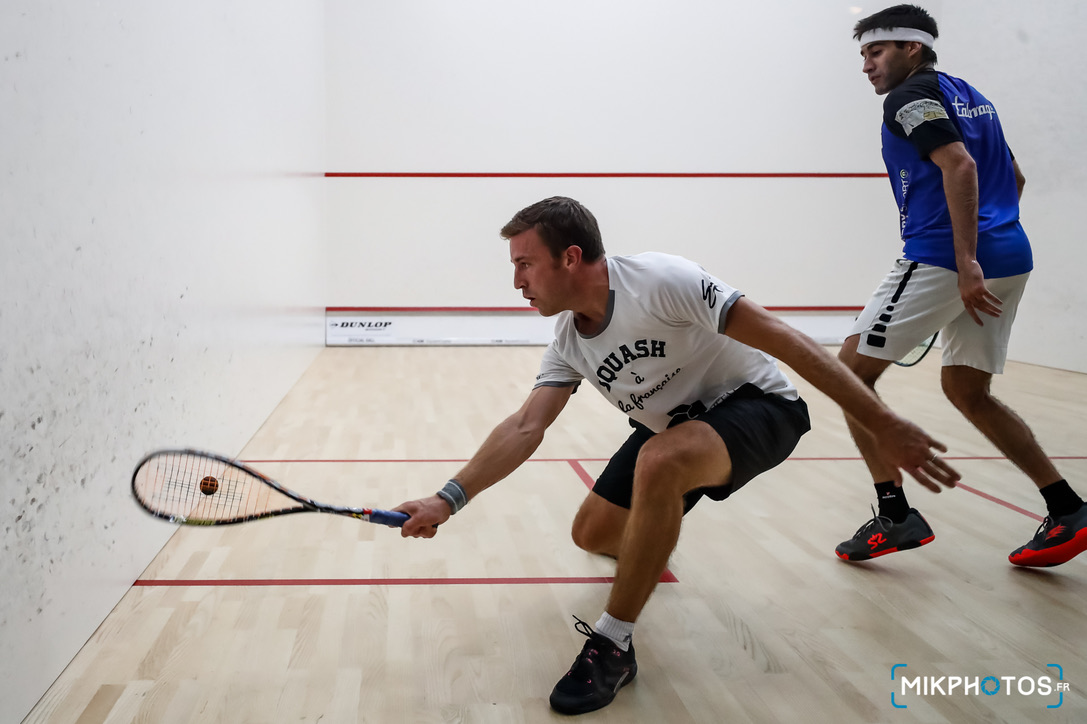 There was a major shock in an all-English battle as Nathan Lake stunned Daryl Selby with an 11-2, 11-6 victory in just 22 minutes. Selby told his Twitter followers: “Nathan played great today. I knew I was short but didn’t realise I was that short! Disappointing start to the season but four weeks training now in prep for US Open.” Lake now meets three-time champion Greg Marche of France.

Chris Simpson beat namesake Ben and faces James Willstrop in what promises to be a testing early-season challenge for both Yorkshire-based players.

Lake’s girlfriend Hayley Mendez overcame Egypt’s Mayar Hany and now faces an all-American clash with the formidable No.3 seed Amanda Sobhy, who is making her first appearance in Nantes.