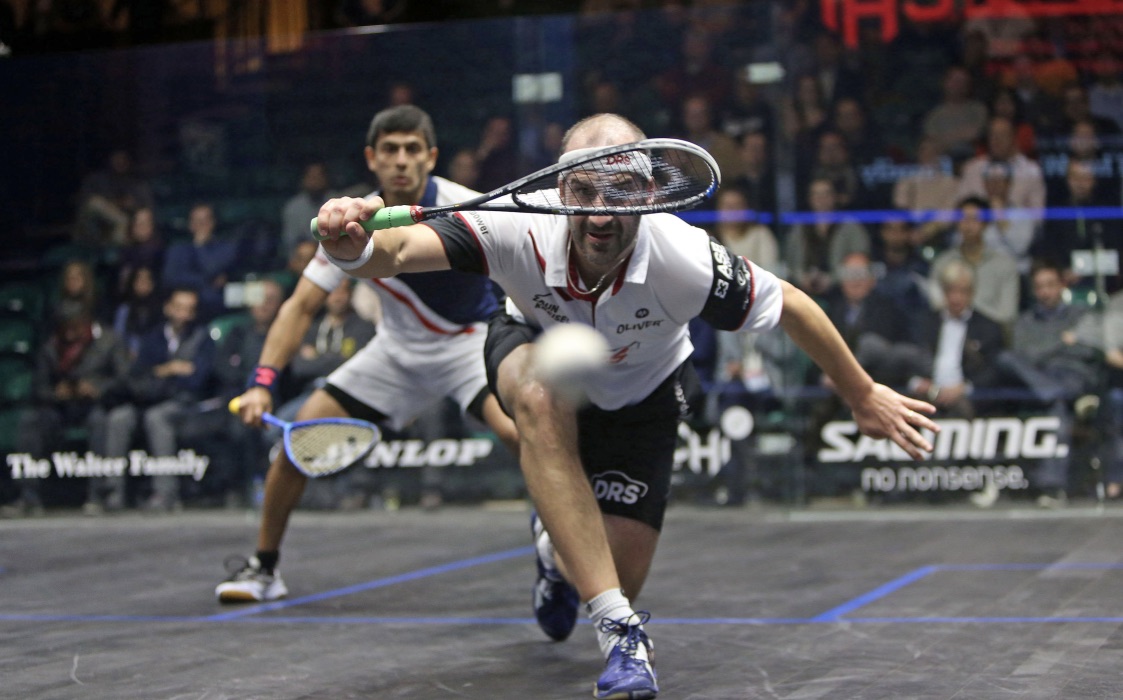 World No.4 Simon Rösner has become the first German male player to reach a World Championship semi-final after he overcame India’s Saurav Ghosal inside Chicago’s Union Station on day six of the 2018-2019 PSA World Championships presented by the Walter Family.

Rösner – who is the highest ranked German male of all time – followed Sabine Schoene’s achievement in 1993 when he rose to an 11-8, 11-6, 11-7 victory against World No.11 Ghosal to ensure that he will go head-to-head with new World No.1 Ali Farag, his Bundesliga team-mate at Paderborn, for a place in the final of squash’s first $1 million tournament.

“It’s big, I’ve never reached the quarters before, and now I’ve made it to the semis,” said Rösner.

“It’s very satisfying, especially with the way I played. After the tough match I had two days ago, I felt much better today and played some aggressive and much more controlling squash, and that put Saurav under a lot of pressure.

“I knew playing Saurav that I would have to be at a 100% because he’s really playing well these days, so I had to be at my best and I’m happy to be through. I think you see the finishing line maybe a bit too early and you’re trying to hang in there.

”The ball was dead in the third game and Saurav can really chop it in, so I was pleased that I could convert the tactics that I had before the match.” 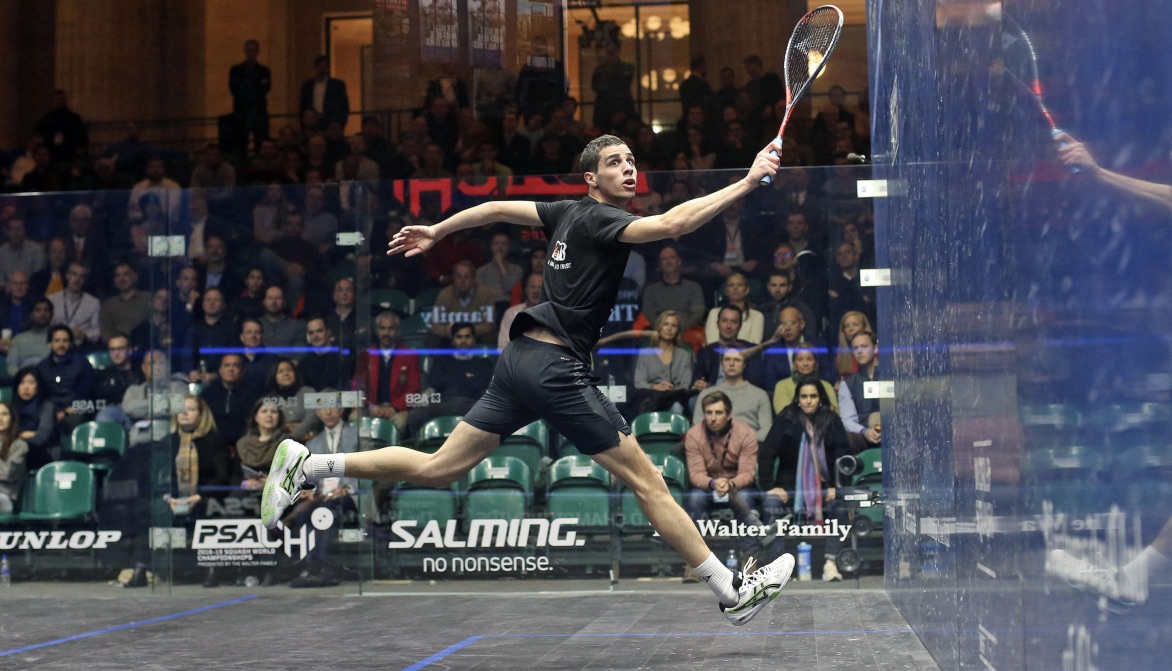 Ali Farag gets airborne against Paul Coll, and today he rises to the world number one spot

Farag will dethrone fellow Egyptian Mohamed ElShorbagy to become the new World No.1 today (March 1) and he will begin his reign at the summit of the PSA World Rankings against the German after beating New Zealand’s Paul Coll 3-1.

The Harvard graduate and World No.6 Paul Coll were meeting for the third tournament in a row, while Farag boasted a five-match win streak over the Kiwi coming into the encounter. Despite dropping the third game to a resurgent Coll, Farag managed the match well to complete an 11-8, 11-7, 4-11, 11-1 triumph in 57 minutes.

“I’ve been very excited [about becoming World No.1]. I would have loved it to have been in a different circumstance and not had a match to focus on, but I’m very excited,” said Farag, who will appear in the semi-finals for the second time.

“He [Coll] gets smarter and fitter, and I think today was very tactical. It was going to go to whoever got the middle of the court. He used the height and angles very well and he never gave me anything easy.

“He was standing in front of me for a big chunk of that match, which is all credit to him, but my length fell short a little bit, so I had to be aggressive from the fourth. I think I did that well, and that big long rally at the start of the fourth was crucial.”

Farag’s win means that there will be two married couples in the semi-finals of the World Championships for the first time after wife Nour El Tayeb, and fellow Egyptians Raneem El Welily and Tarek Momen claimed victories in their quarter-final fixtures yesterday. 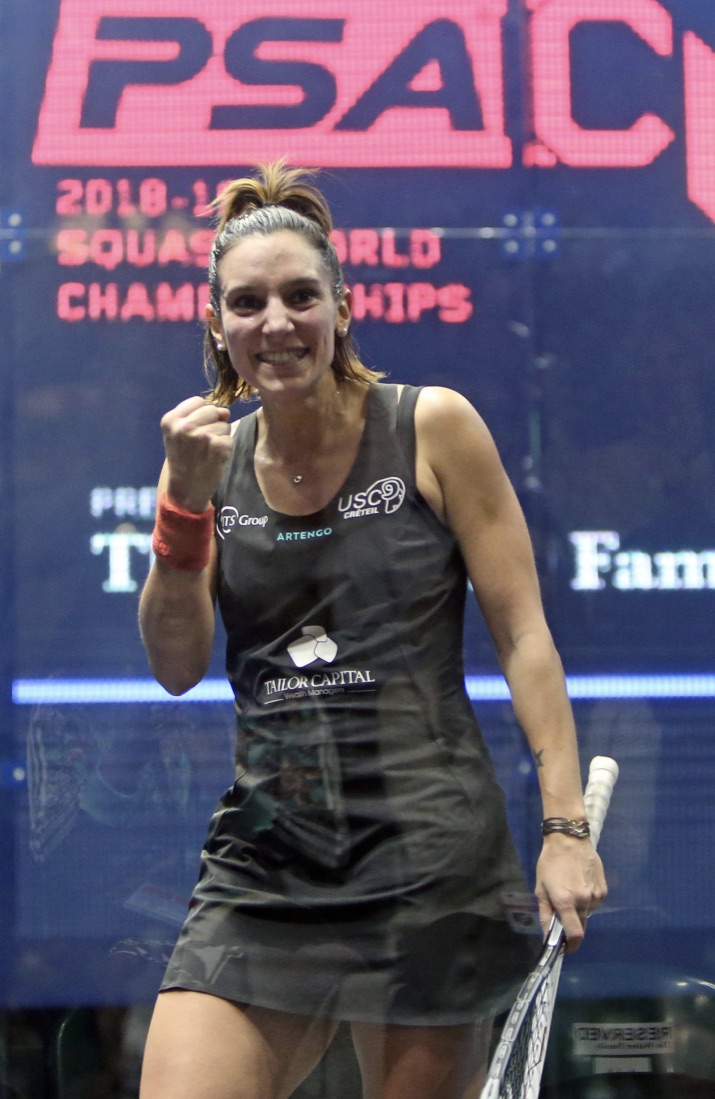 It is also the first time since the 2014 edition that the top four seeds in the men’s draw have all reached the semi-finals.

France’s Camille Serme (pictured) is through to the semi-finals for the fourth time in her career after the World No.5 put in a masterclass to end the run of New Zealand’s Joelle King, winning 11-7, 11-8, 11-4 in just 37 minutes.

King got the better of Serme when they met in the quarter-finals of the J.P. Morgan Tournament of Champions in January, but the woman from France executed her game plan to perfection inside Union Station’s Great Hall to move to within one win of a maiden World Championship final appearance.

“When I lost to Joelle in New York, she played really well, but it was a tough loss for me,” said Serme afterwards.

“We always say you learn more from a loss than a win, so I worked hard on that match, and I was really focused on what to do on court and not about the World Championships or rankings. I just wanted it so badly, I stayed focused the whole way, and I’m very happy with that.”

Two-time World Champion Nour El Sherbini stands between Serme and a coveted place in the title decider, with the World No.2 seeing off the challenge of Welsh No.1 Tesni Evans.

Sherbini, who won both the 2015 and 2016 World Championships, eliminated United States No.1 Amanda Sobhy in the previous round after a gripping five-game battle, but the 23-year-old required just three games to get the better of Evans.

“She has been playing very good from the start of the season and improving,” El Sherbini said.

“She’s in the top ten now, and even though it was 3-0, it wasn’t easy. I’m happy with the way I played. I had a tough last round against Amanda, but I had a day off yesterday and recovered well to come back again today refreshed.”

The semi-finals of the PSA World Championships will get under way at 17:00 (GMT-6) on March 1. Action will be shown live on SQUASHTV (Rest of World), Eurosport Player (Europe only) and major broadcasters around the world, such as BT Sport, Fox Sports Australia and Astro. 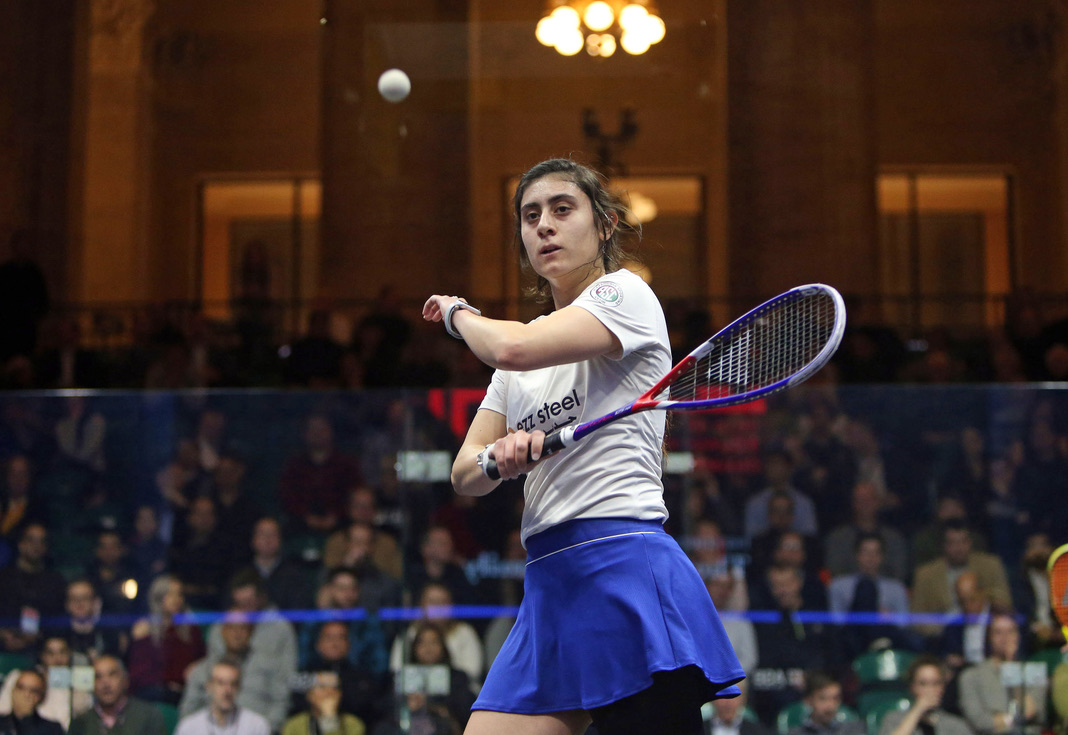 Nour El Sherbini in action under the Union Station chandeliers