Alan Thatcher October 9, 2019 No Comments on Spirit of World Squash Day shines in India as Ritwik Bhattacharya teaches the game to tribal children 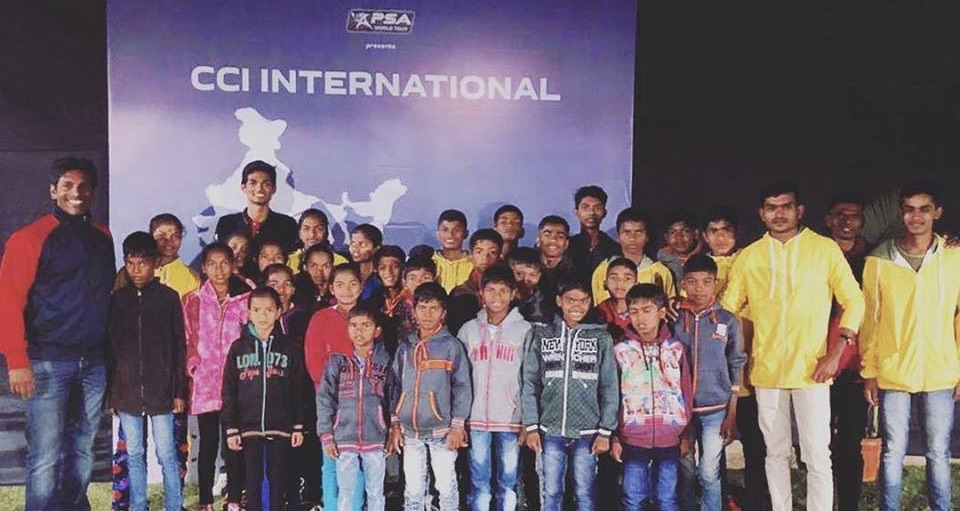 Former Indian number one Ritwik Bhattacharya, a regular and talented competitor on the PSA World Tour for many years and now a successful coach and promoter, is staging one of the most significant projects on World Squash Day.

He is teaching the game to a large group of tribal children who had no idea what the game of squash was two years ago.

Bhattacharya, who reached a career high ranking of 38 in 2006, has established his own START Academy which will be active at three venues near Mumbai on Saturday. START stands for ‘Squash Temple And Relentless Training’.

Sachika Balvani, a former Trinity College student who is a member of Ritwik’s team, said: “We are looking forward to doing something here for World Squash Day. Ritwik has established a very unique academy, and I personally have never seen or experienced anything like it.

“We are based a couple hours outside of Mumbai, in the countryside, and work with players that come from across India and with all sorts of backgrounds.

“Ritwik also coaches kids of all ages who live in the tribal village of Kalote that neighbours the academy. The academy started just around two years ago, and already these kids (who had never even heard of squash before then) are playing tournaments and doing well all over India.

“He also works with boys from the Indian National Defence Academy (Pune) and the Rashtriya Indian Military College (Dehradun).

“Therefore, we can definitely have events in these three places, the START Academy, and the squash centres at both military bases.”

Ritwik added: “There is a huge push to revive squash in the Indian Armed Forces, who used to be the backbone of the Indian team two decades back.

“We are teaching squash to 40 tribal kids who didn’t know what the game was even two years ago till my academy was ready. The tribal village is situated in the state of Maharashtra in the foothills of the Western Ghats. The tribe is the Nirguada tribe which means the ‘butterflies of the woods’.

“We will be creating a video around this and want to include this as part of World Squash Day.

“The video will only be ready by the first week in November as we will include footage from the Junior Nationals from 15-22nd October. Some of the kids will be flying for the first time.

“Do check out my Instagram page @rbstart for more information.

“Sachika is well in control of organising the three venues for World Squash Day. We are planning to cut a cake in front of the squash court with all our kids (over 50) in attendance if not more.”

In a poignant moment he added: “Establishing the project was a huge effort at an immense personal cost getting the Start Academy ready. I would like to thank my parents – my father who passed away without seeing the completed academy – and my mother who is now moving to Kalote Mokashi to help teach the kids proper English.

“To my friends Munish Makhija, Sridhar Gorthi, Pooja Bhatt without whose support this project would never have got completed and last but not the least my wife Pia, who has stood by me through thick and thin, handling everything at home while I’m away at the academy working with the kids.

“It’s really a privilege to be doing what I’m doing. We have a strong faculty with Jagdeep Singh, India’s heavyweight pro boxing champion, who also is training the kids. And the Indian Armed Forces have even sent professionals to help with their fitness and strength training.

“Stephane Galifi, a squash professional who was born in France but represents Italy, has also popped into the academy and played with the kids on his frequent visits to India.”

As well as coaching, Ritwik has firmly established himself as a leading tournament promoter with his JSW Indian Squash Circuit showcasing the game at some superb venues, including the glass court being set up inside the Cricket Club of India stadium in Mumbai for the successful CCI Tournament.

The 2019 final back in April was an all-Egyptian contest in which Tarek Momen beat Fares Dessouky.

Ritwik invited a group of tribal children to watch the final and posted an impassioned message on Facebook: “All the tribal/ adivasi kids from a small village called Kalote on the outskirts of Mumbai, came to the CCI final to watch the on going Indian Squash Circuit …. our future lies in the hands of these kids.

“They have will, they are determined , they are born champions and trust me, when you have nothing to lose , you are all in. They came, they watched, and they seized every moment!”

Please check out this hugely inspirational video which tracks the progress of one of Ritwik’s pupils, a girl called Bijali. We may be hearing much more of her in the future.