Squash Girls Can – a story from a different land

Rosanna Radlinska-Tyma May 14, 2018 No Comments on Squash Girls Can – a story from a different land 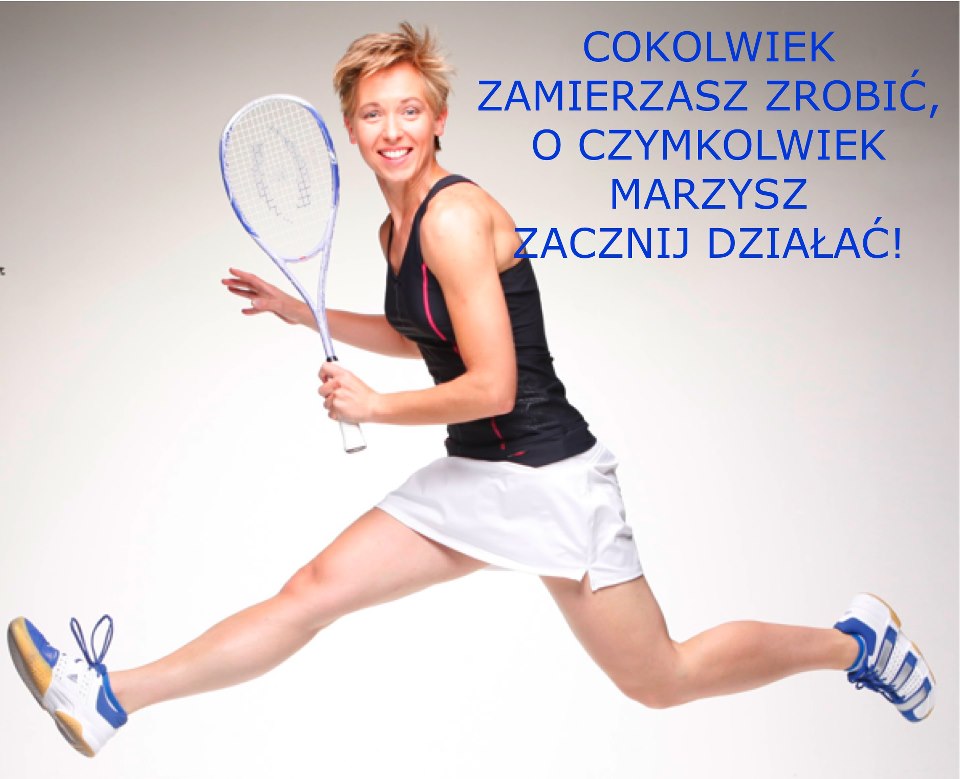 Polish squash legend Dominika Witkowska (the translation means “If You dream about something, start doing it now”)

The first time I heard of the initiative which supports women’s squash was probably during the British Open 2016 when I talked to Adriana Olaya from PSA World Tour. Then I gradually saw it growing and the next thing I see is all that is being done at England Squash.

All of it is great. However, I must point it out that as far as I remember there were many girls playing squash whom I met personally over those 13 years of my residence in England and who are not playing now.

All of them great talents and personalities. England was and is the strongest in Europe in terms of women’s squash, so what happened that now a Squash Girls Can campaign is needed? That I will leave for you to ponder.

I wanted to write about two women from Poland, a country where clubs have become very active internationally recently and host European events.

I interviewed both of them as one is running great events for women and the other is a coach to a group of ladies and girls and runs Ladies Squash League in Warsaw. Before that, I need to explain that tournaments in Poland are played in every part of the country each weekend. Tournaments are graded, so A grade are for the best (top players or elite if you wish), B grade are for advanced, and C grade are for beginners.

There are men, women, and junior events that can be run alongside. Medals or trophies for the first 3 places are a must. For those who are interested in numbers: there are approximately 300,000 people playing squash in Poland, around 1,000 tournaments a year, with 600 courts, and 200 clubs.

Still, the country is not a powerhouse for squash just yet (only 15 years of Polish Squash really), but the potential is huge. The numbers of women participating in squash are very high and still growing.

The first lady’s name is Julia Ogorodnik and she runs women’s events in Zabierzów Squash (a local club not far from Cracow). I never met her in person, I just saw her squash activity on social media. Julia and Bogus Kaleta (yes, there is a man behind that woman) organised a Pink Sledge tournament in winter and they managed to get a full 32 draw. Yes, 32 women! The most prestigous A grade tournaments in Poland struggle to have that entry number and here, in the outskirts of Cracow, a tournament graded B was a full success.

The other lady is THE Polish Squash legend. She is a seven-time Polish national champion, the first Polish woman to be ranked in the top 100 of the PSA rankings, and is still a very active player on the Masters Circuit. Her name is Dominika Witkowska and she is based in Warsaw.

I managed to interview them in Polish and decided to include part of their interviews here.

Squash Mad: Why ladies squash?
Julia: Because… (jokingly) Can I swear? No? OK, then I will try to explain politely. I was travelling to tournaments all over Poland and everywhere I went I had an impression that ladies squash was in a big shadow of men’s squash. Not so much attention is paid to it and just to mention the prizes… The entry fee for women is a bit lower but the prize money is significantly lower. Even in the media, women’s squash is almost non-existent. Polish Nationals 2017 – I was there but I had a feeling that the event was only for men.

In my view, if you want to move women’s squash forward, you need to pay more attention to it. You need to almost make those women play and develop, but you need to show them that we all see how much effort they put in squash and appreciate that!
PInk Sledge tournament (spot the pink sledge)

Dominika: Ladies squash has been always aside in terms of tournaments, leagues or group trainings. The number of women playing squash has been growing and it is still doing so. More and more women are coming to clubs and they are visible. They play at different levels and that is why I wanted to do something for them.

I started a few years ago from a group training session for women just once a week, then I introduced three-day camps. A nice size group of women came out of these two initiatives who, at some point, wanted to try to compete, so that was the time for the Ladies Squash League which takes place every Sunday now. At the very beginning it took place in Squash City club and Natalia Ryfa was my partner in crime, but Natalia moved to another club and now I solely run the Ladies League in the same club.

The numbers of women are steadily growing and some of my students are playing in tournaments all over Poland climbing the national rankings. I am very proud of them. I also collaborate with Prime Fitness Club in Szczecin where Hugon Stachurski (yes, a man) runs a ladies league and group trainings for women. The prize money in A grade tournaments differs because of entries.

Squash Mad: What do you think should be done to increase the number of female players in Poland?

Julia (laughing and joking): Blackmailing, threats, torture, stalking… 🙂 To be honest and serious I invite every single girl to a tournament individually. I think if they see that we do that, they know it is being done out of passion not out of obligation. The girls feel that, they see that we are waiting for them, that we are happy to see them.

These events create a wonderful atmosphere of friendship and competition, so they want to come back. There is always something extra to be remembered from the tournamet like eg. a pink sledge. The good thing about women is that when you invite them, they will come with their friends, children, and husbands increasing the potential group of people just about to be hooked up on squash. When we invite a man, a man comes.

Dominika: Popularisation and promotion are important. We need to involve media also at the local level. Creating event on social media also helps a lot. Seeing the growth of recreational squash I am certain that the future for women’s squash looks good. The Masters events are also good as players don’t come for trophies or prize money, they come to see the friends, compete, visit places. It is a part of sport tourism. It is a way to popularise the sport amongst amateur players. And juniors. They play a big part in it. I try to “infect’ them with my passion for squash and tell them that it is hard work but also great fun and the way of making new friends.

I will stop here, because I would like to write more about the second event that Julia organised. This was a Pink Scooter tournament with cute medals and many little gifts to be drawn among the ladies.

Squash Girls Can. I don’t play squash but I am a passionate supporter and both of my kids play it, so I decided to help Julia with this tournament. How? It was easy. She was put in touch with a good and not too expensive T-shirt overprint company (How do I know him? Through squash of course) to be able to offer a tournament T-shirt. She created an event on Facebook with lovely posts for ladies.

Julia and Bogus went to the local radio station to talk about squash in general but also promoted the event. Below, you can find a podcast, it’s in Polish, but believe me, it did the job in terms of sponsors.
http://off.radiokrakow.pl/podcasty/wejdz-do-klatki-zagraj-w-squasha/

I managed to get Mohamed and Marwan Elshorbagy to sign the T-shirts for the ladies. Both professionals were absolutely up for it and they signed 34 T-shirts with pleasure using a permanent marker. 🙂 (How do I know them? Through squash of course). By doing so Julia managed to get more sponsors for gifts and a Radar Gun Challenge!

The 32 girls certainly had good fun, played squash, and were happy to take some good memories home, not to mention the tournament T-shirts. They will certainly be back.

To sum up, that tournament was great to encourage more women to play. Their game was appreciated as was their effort. Those ladies spend their money on squash, not only on their gear and equipment, but also on travelling.

Ladies can bring more people to squash as they tend to go in groups, they like to have a group around them, be it children, friends, boyfriends or husbands. Radio and Facebook advertising helped to get more sponsors. However, it all starts at the top. The top players can help to build the strong base of squash supporters because they simply appreciate them. Please, engage them.

Thank you picture for top world players from the bottom of the squash pyramid, but “the pyramid stands becuase it has a strong base” (by Conor D’Cruz)

PS. This can be a story from any land. Feel free to change the name of any country. I hope you like the ideas and you are welcome to replicate them, add something new as well, and share please.

Rosanna is proud mother of two young squash players, a talented linguist and translator, and a popular writer on the European squash scene. Based in Bristol.