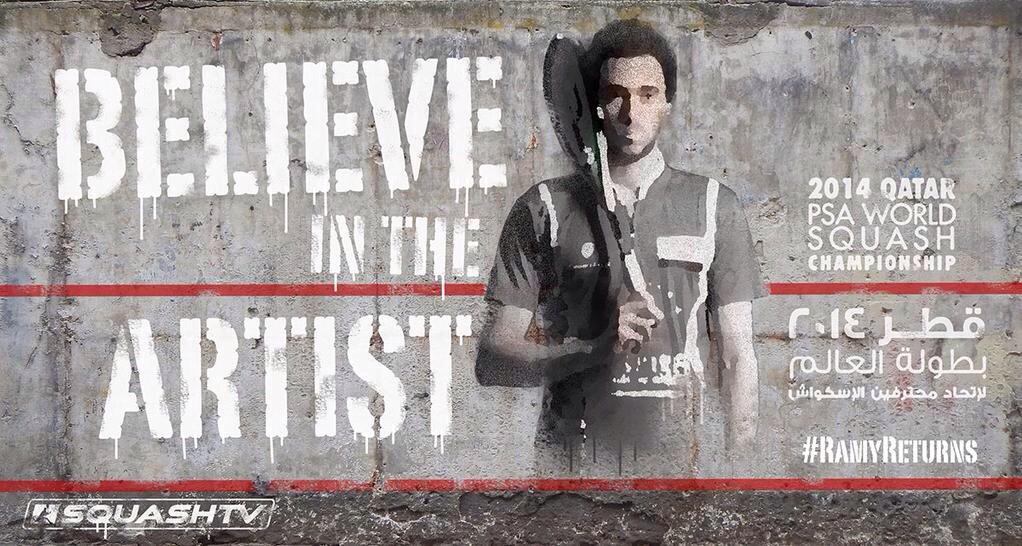 The stage was set and the Khalifa Complex in Doha, Qatar was packed to the brim. For the first time in a long time the two best players on the planet were set to square off. To make it count for something it happened to be for the finals of the 2014 World Championships.

Mohamed Elshorbagy has quickly risen to the top of the rankings while Ramy Ashour has been out of action rehabbing from a hamstring injury. Both players won three games to love in the semi-finals meaning they should have been relatively fresh for this epic encounter.

The lone concern for squash fans and those in Ramy’s camp was not his hamstring, but his right shoulder. Ramy was clearly in pain for the last half of the third game against Gregory Gaultier in the semi-finals. How would Ashour’s shoulder be?

Surely he couldn’t be crowned world champion after missing the past six months and having a bum shoulder, or could he? If anyone could pull off such a feat it would be the great Ramy Ashour.

Due to the time difference I had to wait until I had a break between lessons to watch the match on replay. This of course is tricky working at a squash club. I avoided all social media sites and made certain nobody tried to talk about the match.

Thankfully I succeeded and had no idea what happened until I watched it for myself. When I was a kid I had to try and not hear about results for a few months until the VHS and eventually the DVDs came out.

The internet and SquashTV has done wonders to improve pro squash and market the game. As the winner was still celebrating in Doha, I was still anxiously waiting to see how the match unfolded. 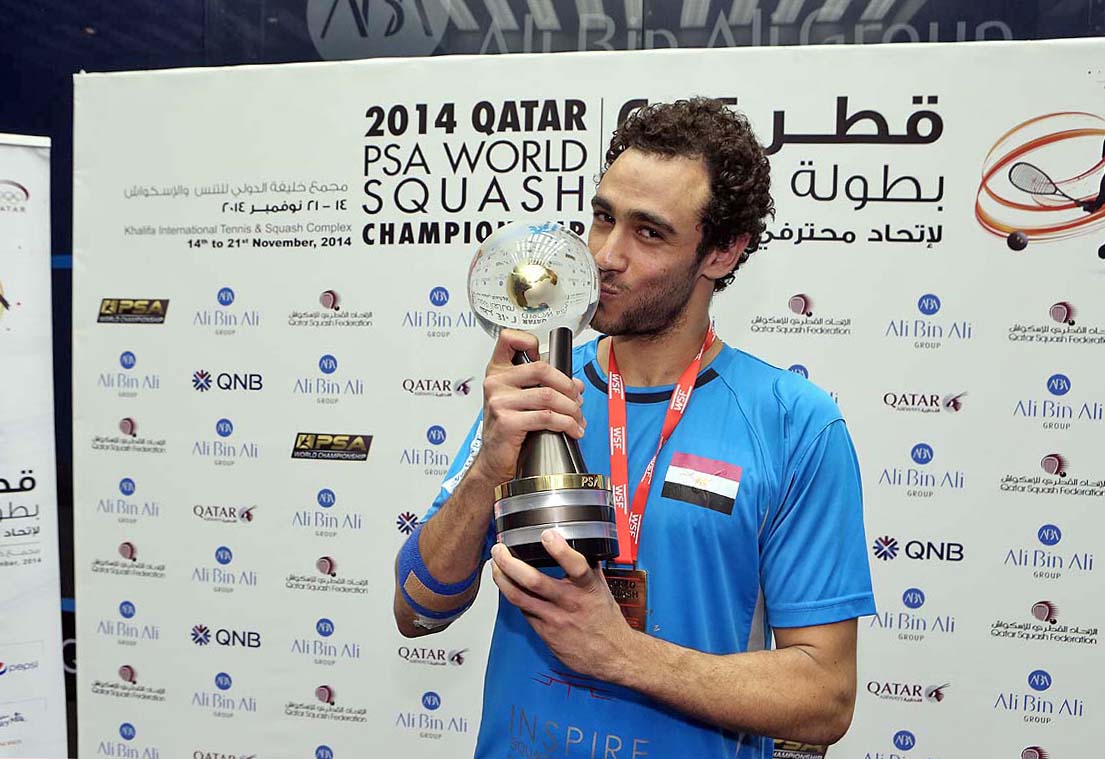 Ramy Ashour kisses the trophy after an amazing victory

The first game was, as expected, quite shaky from both players. Elshorbagy looked the more relaxed and focused of the two. It was evident early on that Ashour’s shoulder was still bothering him. Ashour only hit two or three balls with any pace whatsoever in this game.

However, even though Elshorbagy got off to a great start Ashour slowly found his range into the front corners and pegged off a few flat out winners and took the game 13-11.

I don’t know when exactly things turned around, but early in the second game Ashour’s shoulder really began to look sore. Ashour started dropping every ball and looked to be in a lot of pain. I began to wonder if he would have to forfeit; is that even possible in the finals of the World Championships?

If this was a team sport there is no way his coach would have played him. Fortunately for everyone (including Ramy) this isn’t a team sport and he didn’t forfeit.

It’s so challenging to play against someone when they’re injured. You can’t help but think about your opponent. As soon as this happens your focus drifts out of your normal zone and you think ahead about the possibilities. This is human nature and I thought Elshorbagy handled this well. He started to rapidly rack up the points and the finals were beginning to look like a dud.

I know it’s not Elshorbagy’s game, but I couldn’t help but wonder why he didn’t throw up a few lobs to Ashour and stand in front of the T line. At this stage of the match I don’t think Ashour could have hit a ball with even a slight bit of pace to hit the ball deep high up on the volley.

I know, I’ve never lost a match from the comfort of my couch. Would this have been a smart tactic to exploit a weakness or do you continue concentrating on your game and on your strengths? Elshorbagy kept on playing his game and it worked, but not for quite long enough.

After Elshorbagy pegged back two games he looked to be well on his way to becoming the world champion. Somehow, out of nowhere, Ashour’s shoulder appeared to be miraculously better.

I don’t know if it was the pain killers or he was able to mentally block out the pain, but this was an incredible turn-around. I suspect that Ashour is going to be out with a shoulder injury for a little while now. Let’s just hope he didn’t do any serious damage to it.

Normally the 6ft 3in tall Elshorbagy can play at a relentless pace for much longer than he had been on court for up to this point. Perhaps his match with Nick Matthew the day prior took a bit out of him even though it was three straight.

What I really think contributed is a combination between the mental fatigue from the pressure he felt along with the style that Ramy plays.

Elshorbagy can rally all day long against Gaultier and Matthew and he won’t slow down because they play in a rhythm. But here in the final against Ashour, even when Ashour could barely hit the ball past the short line, Elshorbagy had to expend a lot of energy moving into and our of the front corners. 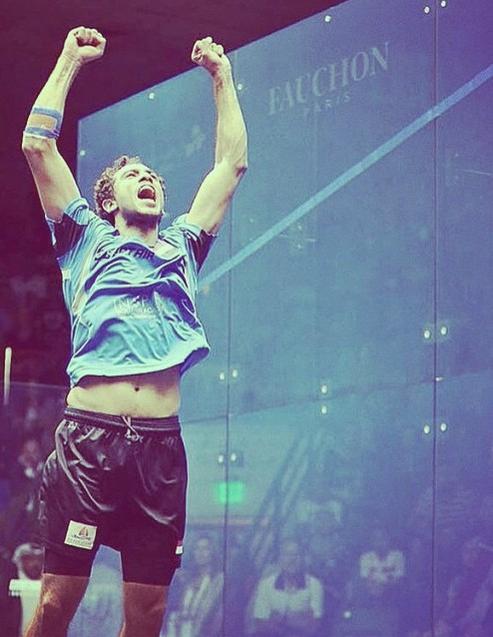 Heading into the fifth and final game, the match was finally starting to live up to the hype. Early in the fifth game Shorbagy made some great gets, but was doing most of the work. Shorbagy must have been fighting the demons to give up as you could feel the excruciating pain he was in.

Not even in the fifth and final game of the World Open did it look possible for Elshorbagy to push any further. Most, scratch that, all of other men on tour would have folded in the tent at some point in that fifth game, but not Elshorbagy.

He eventually found himself 10-5 down and on top of facing all of these match balls he was completely spent. All of a sudden, though, all of the pressure was now off of Elshorbagy.

Maybe we expected him to win before the start of the match, but now that Ashour was 10-5 up and Elshorbagy was so wiped he was bound to lose; nobody can come back from this situation, especially against the great Ramy Ashour.

Ashour won the next point but once again he squandered another match ball. Elshorbagy followed this up by winning the following point and had a match ball of his own. It was not to be as Ashour played a perfect rally and Elshorbagy never had an opening. From there the tension mounted as the referees were called into action a number of times.

Finally on Ashour’s seventh match ball he capitalised to win 14-12, and then jumped off the front and side wall in complete shock at what he had just accomplished.

Nobody, not even Ramy himself, thought he was going to win this week. Any other week, we all do. But this was the one time where the pressure was off and he still pulled off the unthinkable. 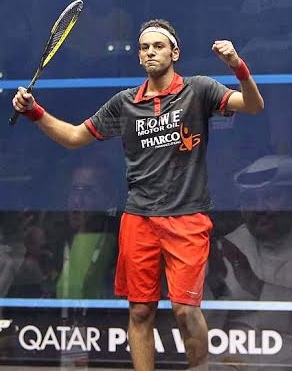 Hats off to Elshorbagy (right) for his exquisite mental toughness. He was strong out of the gate and kept to his game plan when Ashour was wincing in pain. Elshorbagy almost managed to pull off the greatest comeback against the best squash player of our generation.

These are without a doubt the best two players in the game. The next time they meet let’s hope they both play well for the entirety of the match.

If they can, then Elshorbagy and Ashour seem poised for a Federer-versus-Nadal type rivalry. All of us squash fans just hope that Ashour can stay healthier than Nadal has been able to.

The squash world has sorely missed Ashour’s absence over the past six months. The game is far more exciting with him back in the mix. As he proved in 2013, if Ashour is healthy he’s unbeatable. Elshorbagy isn’t too far off the pace now, but I feel he doesn’t vary his pace enough and Ashour can read him quite easily.

Elshorbagy uses raw power and speed to beat everyone else, but it won’t work against Ashour. It wasn’t enough against Ashour after missing six months and gifting two games with his shoulder injury, and it certainly won’t be enough when he’s 100% fit and healthy.

I mean, IF Ramy can stay fit and healthy. 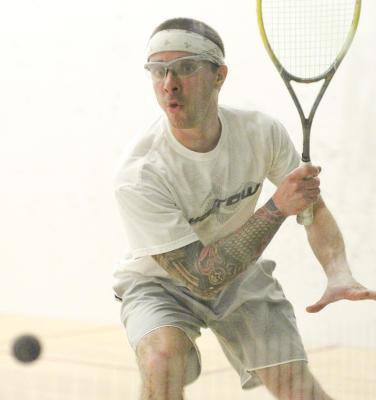 Chris (right) is the coach at SMUS and the Victoria Squash Club in British Columbia, Canada.

JOIN THE DEBATE: Please feel free to add your comments below.