Stairway to Heaven (or Hell). My Lockdown Lament, by Aubrey Waddy

Guest Contributor May 1, 2020 No Comments on Stairway to Heaven (or Hell). My Lockdown Lament, by Aubrey Waddy 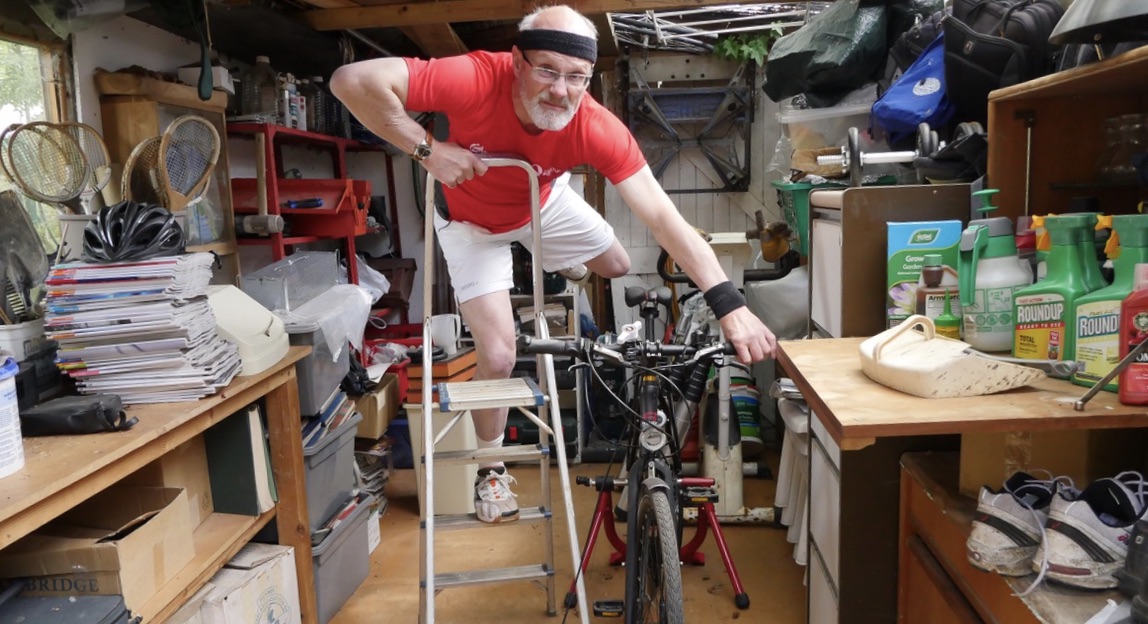 Aubrey Waddy needs a stepladder to board his bike

This darned lockdown, especially restrictive for people like me in my eighth decade. It means I now have not one but two reasons for not playing squash: first, Covid the Nineteenth, like some warrior from a pulp science fiction novel. Second, the consequence of an innocent activity from my very first decade, way back in the 1950s.

I grew up in a large house, with high, Victorian ceilings. The first/top floor was reached by no fewer than sixteen stairs, fourteen straight, a right turn and two more to reach the landing. As I grew braver and sillier through my childhood (one of which characteristics I’ve retained to this day), I would from time to time break my record for the number of these stairs I could jump down. It’s a testament to the house that the ceiling of the cellar never cracked from the repeated impact of a small tending to medium sized boy. I don’t remember the occasion, but one of my sisters told me I once jumped down the entire straight fourteen. 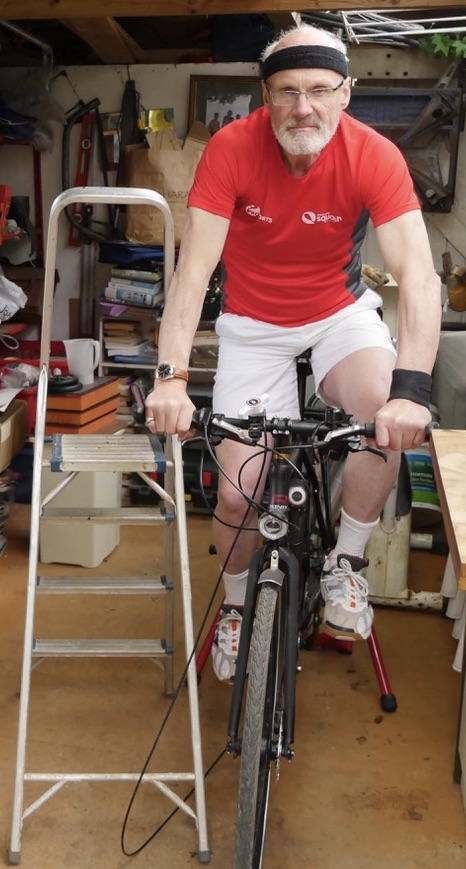 There’s no evidence linking this with the pain that developed in my knee through my teens. It was diagnosed in my second year at uni as osteochondritis dissecans.

According to the Mayo Clinic website, this is ‘a joint condition in which bone underneath the cartilage of a joint dies due to lack of blood flow… causing pain … most often in children and adolescents… after… high-impact activity such as jumping and running… most commonly in the knee’.

In me, the osteo-whatever might have developed just from the usual mix of childhood sport and running around. But the stair jumping could well have played a part.

I had two major ops on my knee following the diagnosis, and was left, in the words of the surgeon, with “a ropey old knee.” My bad knee has been with me like a dark companion ever since. It restricted my squash through my twenties and eventually obliged me to give up at the age of 35.

I continued life with a slowly worsening limp and no prospect of decent exercise. However, a quarter of a century later, I discovered I could after all move round a squash court, at Masters speeds, with only moderate discomfort.

I’m eternally grateful to my friend Peter Cattrall for persuading me to have a go again. My limp further worsened as my squash got better. Eventually, a most accomplished surgeon, Mr Geoffrey Cannon, gave me a new knee.

With the operation, the limp disappeared. Bye bye Dark Companion? If only. Some time before the op I had started to notice an occasional sharp pain in my hip, a probable consequence of the many years of limping.

Last September the hip finally became too sore for squash. My final game saved me from relegation in my box league at the end of the month: I won 15-13 in the fifth game. Not that that’s important.

It takes ages to get into the orthopaedic system in Buckinghamshire. That was before the pandemic. To continue regular exercise I would go up to my club in the mid evening when friends would be around, ride one of the exercise bikes and enjoy some social contact.

Until now. Welcome SARS-Cov-2. With the club closed I resorted to the elderly exercise bike in my garage. This then died (there’s a lot still to be discovered about Sars-CoV-2). A new exercise bike would cost many hundreds of pounds, with no guarantee that it would fit if bought online without a test ride.

Plan B therefore arose, a turbo trainer, into which you can mount the back wheel of a push bike for a stationary ride. (I do do normal rides, but there are times when a quick static half hour is best).

I visited the excellent Dees of Amersham just in time. With the country entering lockdown, they had almost sold out of turbo trainers. For anyone interested, they sold me a Zyro Minoura. These apparently are never returned for repairs, and so far I’ve been most impressed.

Not that there wasn’t a major, humiliating challenge. In the footsteps of Sir Bradley Wiggins and Sir Chris Hoy, and recalling the feats of the non-knights Chris Froome and Geraint Thomas, I diligently assembled the Minoura. It didn’t take long to fit the bike into it…

…and then: I couldn’t get on! I’ve always felt physically capable for my age, certainly up there with my now elderly peers. When simply using the bike outside I would angle it without a thought in order to mount. Now, with the bike fixed upright and movement of my hip seriously limited, I couldn’t do it.

Nobody has witnessed the solution, and nobody’s going to. But you can picture the scene. Beside the bike I’ve placed my ancient, paint spattered step ladder.

Two steps is all it takes and I’m away, for half an hour generating enough electricity to power a couple of light bulbs while reading a Kindle. When I’ve finished, the process in reverse gives a successful dismount without the need to call the emergency services.

But I’d rather be able to play squash. Curses on the virus and curses on the curfew. I’m so looking forward to having not two reasons for not playing, but none at all.

PS: After I’d sent this article to Alan, he got back to me with the request for a photo. Bad idea! I’m internet dating at the moment, in the necessarily tantric fashion current circumstances dictate. My chances of success, slim already, would plummet to zero if it got around that I needed a step ladder to bolster my dating performance.

EDITOR’S NOTE. It’s OK, Aubrey. Your secret’s safe with us. We won’t tell anyone you can’t get your leg over …