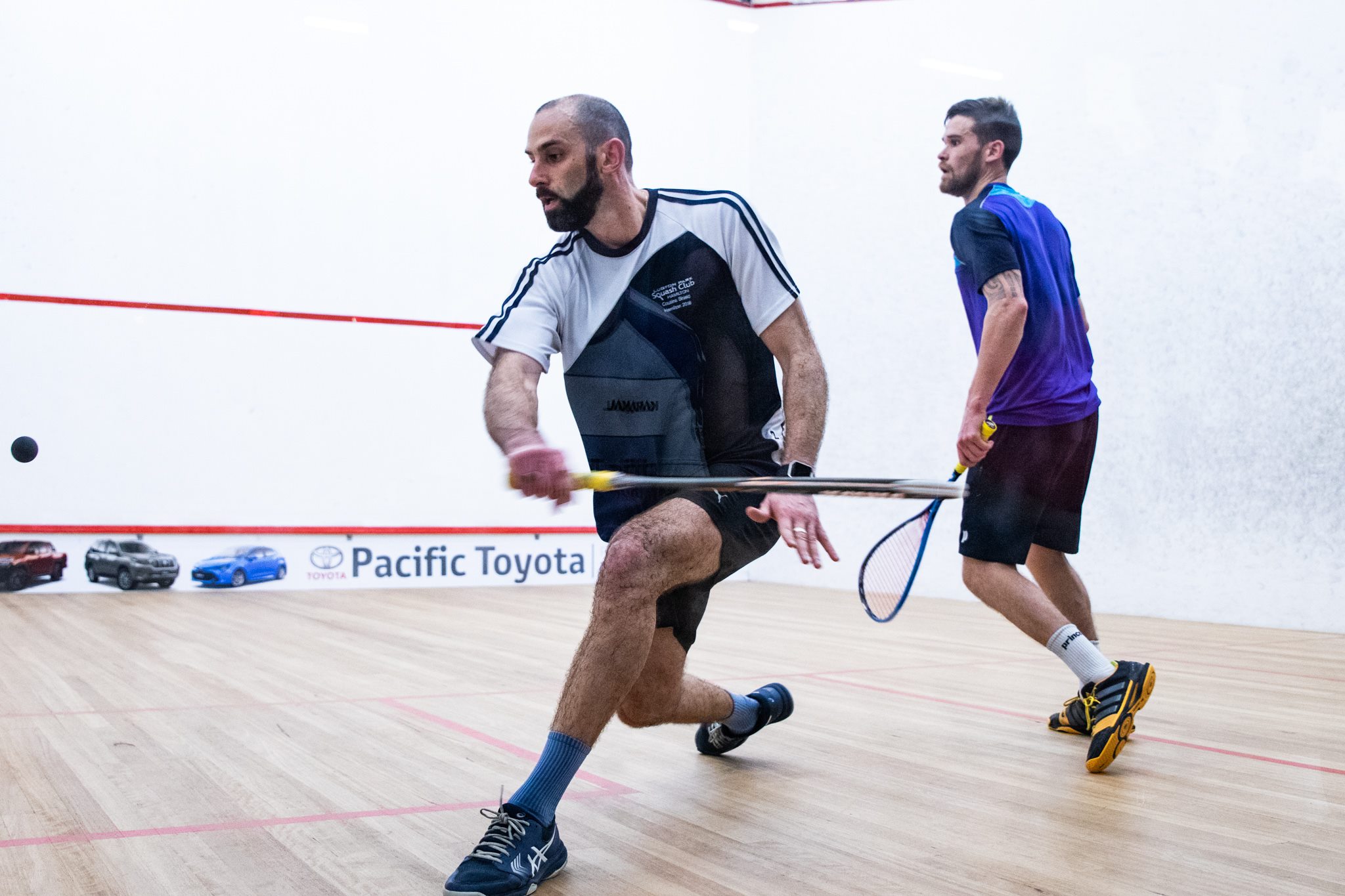 Australian Steve Finitsis is enjoying his “retirement” from the PSA World Tour, heading back home to the northern outpost of Cairns to rejoin family, friends and team up with his old squash coach.

However, he still can’t resist the challenge of competing with the game’s rising stars as he demonstrated in the recent Toyota Pacific Cairns Open.

The brutal reality of the demands of pushing your body to the limit once again were brought home as he completed two 75-minute marathon matches in the quarter-finals and semi-finals. He showed all his old class in defeating Asyraf Azan of Malaysia but couldn’t quite repeat the result in a blockbuster semi-final against top seed Evan Williams of New Zealand.

Squash Mad caught up with Steve soon after the tournament as he rested his weary body.

Here, in his own words, he talks about life after leaving the PSA World Tour.

After retiring from the PSA mid 2016, I moved back to Australia after living in the Netherlands for eight years. I moved back to the area (Far North Queensland) where I grew up, to be in a partnership in a coaching role at Cairns (Sportworld Fitness) with good friend Marc Forster, who used to coach me in my junior to early PSA days.

The Cairns Squash Club is an eight-court, glass-back air-conditioned centre and has recently this year had an upgrade with a $150 000 AUD Government grant that replaced all the floors and lighting on all courts. We also have an adjustable tin, to be able to drop it to 17 inches for the PSA tournament.

Most days I’m still on the squash court but rather than playing or training I’m coaching and mentoring junior players, which I absolutely love doing. It gives me a great feeling watching them all progress and not only give them the tools needed to be better squash players but also to be confident young people off the court.

Also, to mix things up, I work casually in the retail business for Oakley. Before I turned professional I worked full-time in a sports store for a number of years in Brisbane. I also enjoy the retail industry to interact and help people in finding what they’re after.

Another great advantage in living back in the area is being able to see my family. They live a 45-minute drive south of Cairns in a place called Innisfail (where I grew up and did my schooling and a big part of my squash learning and development).

Since coming back to the region I’ve picked up a new hobby, and that is to run the absolutely stunning trails and tracks around Far North Queensland. I’m always discovering new areas and going in the odd race as well. In one of the pictures i the gallery, it was the first time I ran a 21km race. It certainly was a challenge and I ran it in 1hr 54min. So I’m a glutton for punishment and have already signed up to do it again next year

The 2018 Pacific Toyota Cairns International was the third year in running the tournament and again was a huge success in the region, with great exposure in local papers and TV. Each year the tournament comes around and I always say I’ll do some specific squash training to prepare me for the event, but it never turns out that way.

I ended up playing two matches back to back that lasted 75 minutes, in the quarter-finals and the semis. I was surprised at how well I pulled up after them. My body actually felt fine after the semi and it would have been interesting if I had made the final. So I certainly was happy with my performance and recovery.

I find I really enjoy playing at that high level again and treat it as challenge and see what the old body can still do. I always get the question “Why don’t you go back on tour?” Or “Do you miss it?”

In all honesty I love the game, and I loved playing and travelling around the world and meeting so many lifelong friends, but I’m happy with Coaching/Mentoring and building up the Junior/Senior participation in the area that gave me so much.

When next year’s Cairns PSA comes around, I’ll most definitely lace up the boots again and have the adrenaline of competition run through me and challenge myself to see if I can still compete with the crop of talented up and coming pros.

Marc Forster writes:
The Pacific Toyota Cairns International took place from October 25-28. Players from all over the world took part with Evan Williams from NZ again coming in as the No 1 seed.

Other players to figure were Tomotaka Endo from Japan, coming in off his recent success at the Queensland Open. Robert Garcia From the Phillipines was playing well, having been runner-up in Queensland. Asyraf Azan was a former top 50 player and obviously very confident in his abilities.

Perhaps the most exciting was Darren Chan of Malaysia, who finally received a spot in the draw after a few pull outs.

The Semi Final showdown was set up after Finitsis took out Asyraf in a torrid five-game affair. The Williams/Finitsis match had everything. With Finitsis leading late in the fifth game, and a few calls that may have gone either way, Williams snuck over the line to record a great victory.

The second Semi was all Chan. The youngster played shots from all over the court and was not punished for the loose ball. Coming from hot conditions and similar bounce Chan powered into the final with a 3-1 win over Endo.

The Final between Chan and Evans was a great match and agin Chan used movement and a variety of shots to keep Williams on the go. It seemed too much for Williams by late in the 4th, the previous days match with Finitsis and the heat took its toll and Chan emerged the Winner. A fantastic result for Chan and his first PSA Title. 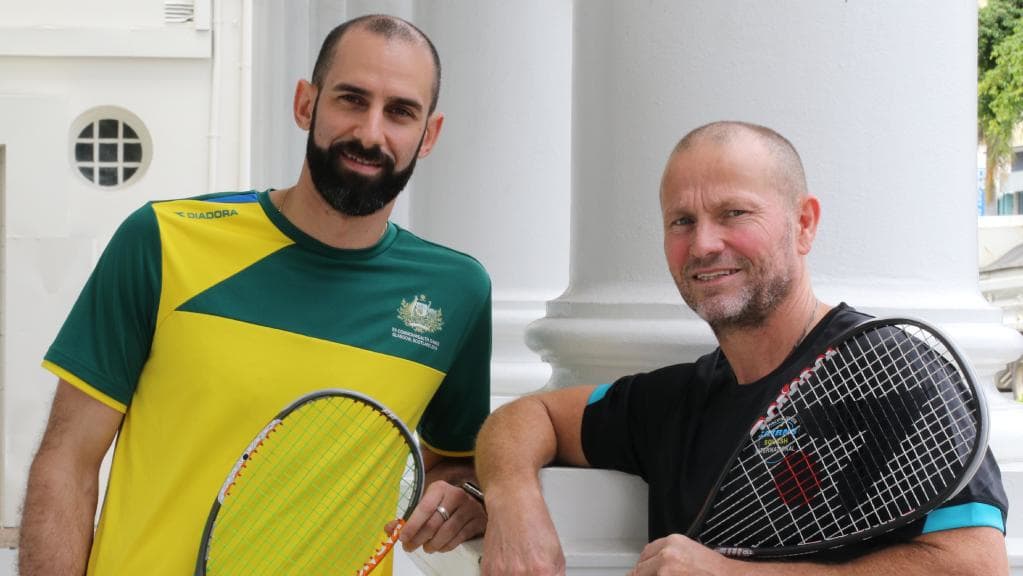