Skateboarding, breakdancing, surfing and climbing all chosen ahead of squash for Paris 2024
By ALAN THATCHER – Squash Mad Editor

Squash has been dealt another devastating blow in its relentless but frustrating battle for a place in the Olympic Games.

The decision announced today by the IOC to support the inclusion of breakdancing, sport climbing, surfing and skateboarding as additional sports in Paris 2024 leaves squash on the outside looking in. Again.

An article on the influential Inside The Games website today revealed: “Breakdancing is in line to make its debut at the Summer Olympic Games, while sport climbing, skateboarding and surfing were all added as additional sports for Tokyo 2020.

“The announcement from Paris 2024 deals a blow to sports such as baseball/softball and karate – the other two extra sports on the Tokyo 2020 programme – and squash, snooker and chess, all of whom launched public campaigns in a bid to secure a place at the Games.”

The article reported that the IOC Programme Commission will discuss the proposals before an Executive Board meeting taking place from March 26 to 28.

The sports will then hope to receive provisional approval from the IOC Session in June before any new additions are officially confirmed by the Executive Board in December 2020, four months after the Tokyo Games. 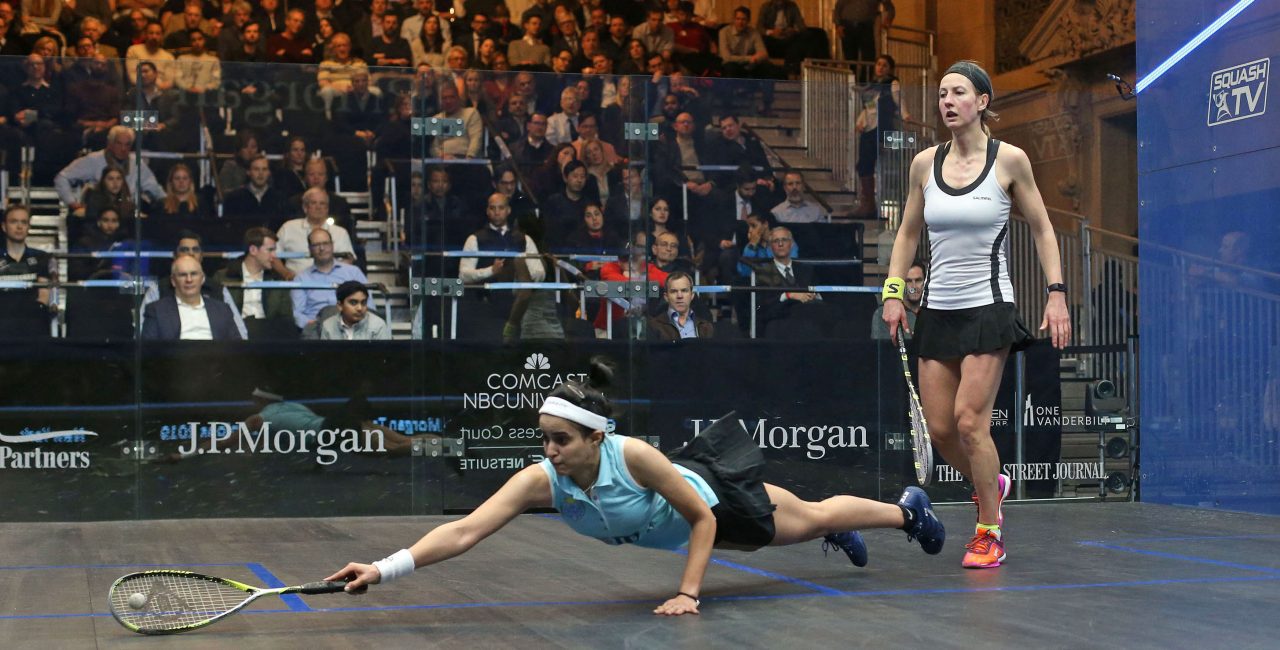 Breakdancing? Nour El Tayeb dives for the ball against Alison Waters at the ToC in New York, an event that attracted 3.5m views on social media

A joint statement issued today by the World Squash Federation (WSF) and Professional Squash Association (PSA) said they have received the news “with great disappointment”.

The proposals mean that Paris is likely to welcome 32 breakdancing “athletes”, 96 skateboarders, 72 wall climbers, and 48 windsurfers … but no squash players.

The latest setback follows a significant spend by the game of squash to employ marketing experts to sharpen up the sport’s Olympic bid.

The inclusion of the Interactive Squash Court, launched by German company Fun With Balls and unveiled at the IOC Youth Games in Buenos Aires in October, was seen as a major factor to demonstrate that squash is moving with the times and able to combat the threat of skateboarding, surfing, breakdancing and other activities targeted at a younger audience.

Only last week the PSA and WSF jointly launched the Squash Goes Gold programme, “uniting behind our dream to see squash become an Olympic sport”.

Let’s move on away from the games and build squash with whatever we have now. #screwthegames I been through 4th rejection now from IOC so screw it. #wearegoodenough

Players and fans have taken to social media to express their feelings of despair. Three-times world champion Nick Matthew asked on Twitter: A message to the IOC: “What does Squash have to do to prove that we deserve to be part of the Olympic Games?”

A message to the IOC:

What does Squash have to do to prove that we deserve to be part of the Olympic Games?

There has been huge progress through things like a joint psaworldtour which… https://t.co/TEp7yeGH4C

I just can’t believe it 😪 hope it’s not over and we can still fight for squash because Squash really needs it compare to others sport !! Everyone has to help please 🙏

The joint statement from the WSF and PSA reads:

WSF and PSA have met the announcement on the proposed selection of additional sports for the Paris 2024 Olympic Programme with great disappointment.

The unity that our sport enjoys globally is exceptional and is getting stronger by the day. WSF and PSA are supported by the entire squash community and, with our athletes at the forefront, have run a strong campaign that respected the timeline and the criteria set by Paris 2024 and the IOC.

During the campaign, we showed that squash has a vibrant and real forward-looking programme rooted in constant innovation, which strives for more inclusiveness and sustainability, youth engagement and equality across all of our activities in and outside of the court.

We truly believe squash could seamlessly integrate into the Olympic programme with minimal costs and an optimised pool of participants.

Our unique interactive glass court would allow squash to bring a lot of additional excitement and spectacular action to any iconic monument of the host city or shed a new light on less known urban areas, while also helping to engage young people in the sport from day one of the preparations and well beyond the Olympic Games. 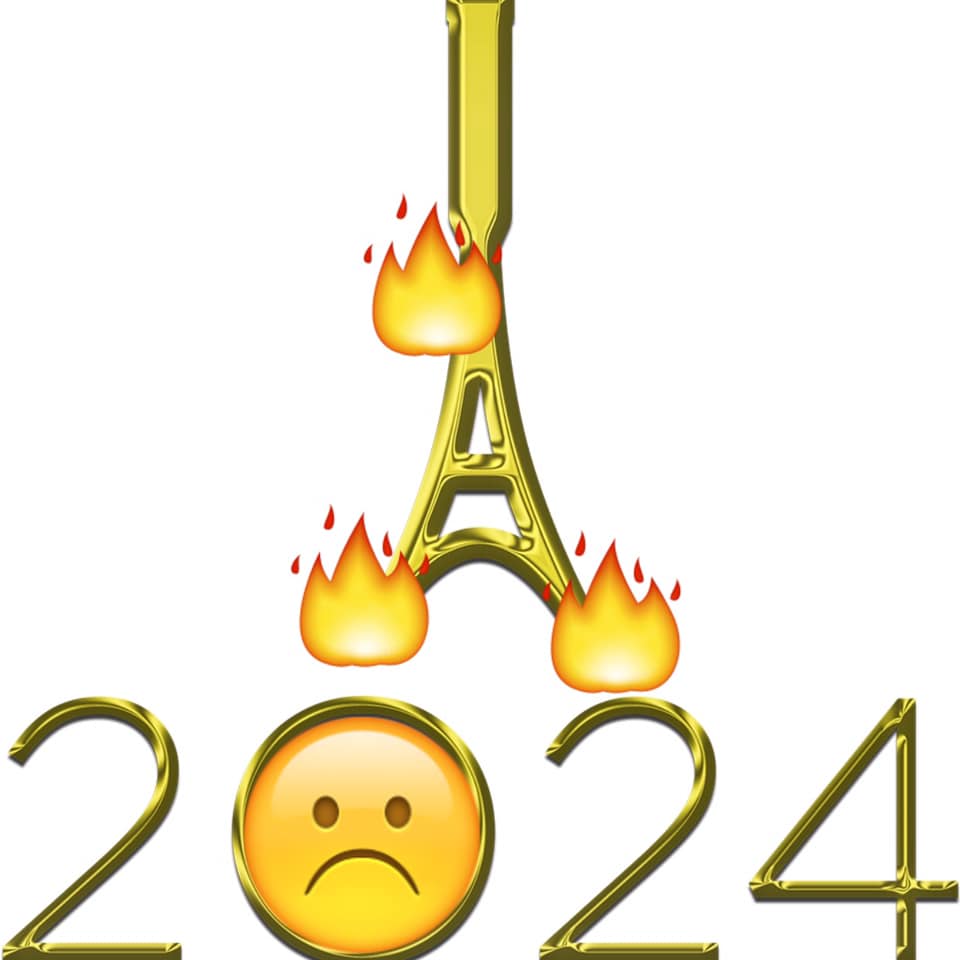 The news was greeted with an outpouring of disbelief on social media. This graphic on Facebook was created by squash fan Lee Coverley.

England Squash CEO Keir Worth has released the following statement: “England Squash is extremely disappointed to hear that squash looks set to miss out on inclusion in the Paris 2024 Olympic programme.

“It is particularly heartbreaking for the talented young players from around the world that will miss out on the chance to showcase their talent, hard-work and athleticism on the biggest stage in sport.

“Despite this setback, we remain proud of our sport, its values, its global appeal, the diversity in the world game and the ongoing innovation that has revolutionised the playing and viewing experience in recent years.

“In England, over 1,200,000 people play squash each year and we have male and female players of all ages competing and winning on the world stage, from juniors up to the professional world tour.

“The opportunity to be included in the Olympics would undoubtedly be a huge boost to the sport. Until then we will remain focused on working with the PSA and World Squash Federation to develop the game at every level both at home and around the world.”

Squash Canada issued this statement at 02.50 on Friday February 22:
OTTAWA, ON, February 21, 2019 – As announced earlier today, squash has not been proposed as an additional sport for the Paris 2024 Olympic Games programme, with the Paris 2024 Organizing Committee choosing to put forward breakdancing, sport climbing, skateboarding and surfing.

Squash Canada is extremely disappointed with this decision. Paris 2024 is the fourth consecutive Olympics where squash has unsuccessfully campaigned for a place on the program.

“The pathway to reaching International Olympic Committee favour by the World Squash Federation and Professional Squash Association has been conducted with full consideration of previous misfortunes of non-selection. Yet today, with the remarkable progress and accomplishments made to transform squash into contemporary relevance, it seems no clearer for what our sport still needs to address for inclusion. Our young stars will wonder, as we all do, what next?

“But we have been here before, and as a result, squash has emerged stronger in the quest. We as players, fans and lovers of our great sport will continue to pursue the pillars and principles that make squash the best sport on the planet.”

In a joint statement, the World Squash Federation and the Professional Squash Association claimed the proposed list of four sports “leads to a belief that Paris 2024 and the IOC favoured sports already in the Olympic programme, leaving practically no opportunity for other sports”.

The two bodies added they were “greatly disappointed” by the decision but insisted the sport could “seamlessly integrate into the Olympic programme with minimal costs and an optimised pool of participants”.

A delegation from the PSA and the WSF – which included French players Camille Serme and Victor Crouin – presented the reasons for squash’s inclusion in front of the Paris 2024 Organising Committee in early January, where it received positive feedback from the Paris 2024 leadership. The sport has made huge strides forward in areas such as innovation, equality, sustainability and youth engagement – all of which matched the criteria that was communicated by Paris 2024 and the IOC.

Squash Canada remains committed to squash’s incredibly bright future irrespective of the Paris 2024 decision, with the sport’s progress highlighted by the upcoming celebration of Canadian squash at the Canada Winter Games, and the sport’s first $1 million dollar tournament – the PSA World Championships – in Chicago, over the coming week.

Does squash need validating by the IOC? It’s an awesome sport irrespective of their bizarre decision. And if it did get into the Olympics wouldn’t we always be waiting for the IOC to ditch it? @SquashMadDotCom