Rosanna Radlinska-Tyma August 11, 2019 No Comments on The Art of Stringing: Jon Sharpe shares his secrets with Squash Mad 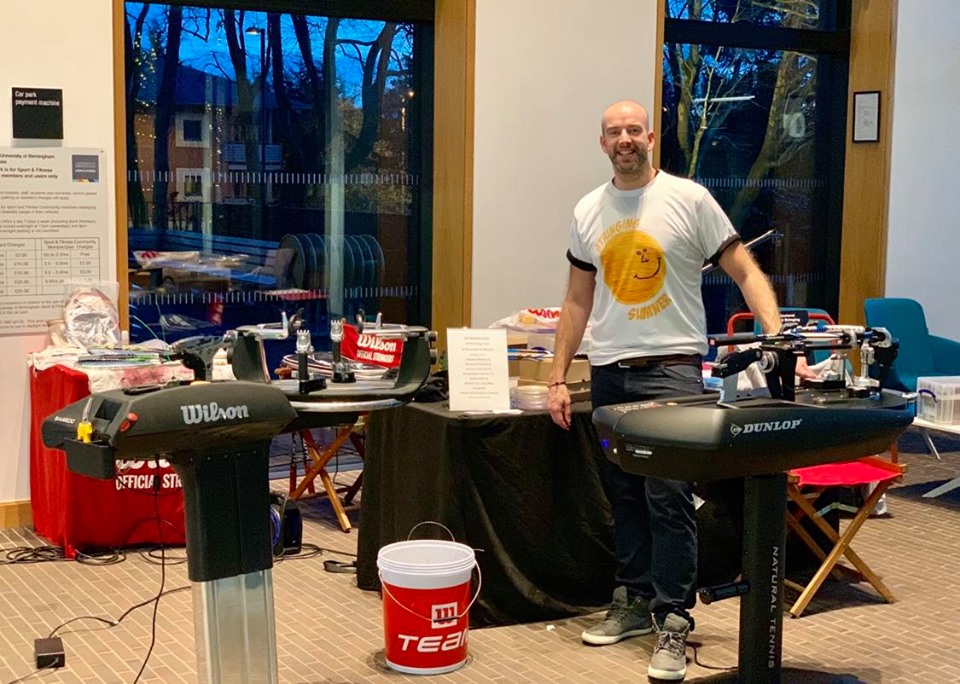 Following the excellent article by Joe Magor in 2013 about Greg Gaultier’s rackets, and how softly they were strung, I came up with the idea to write something about stringing in general as it is very important to players.

I know that they have their own stringers and all their rackets must be strung the same way, however, I never really talked to those people who are so important in squash players’ lives.

I used social media to contact two of them, because they are there and show their work. One is Jon Sharpe, aka the String Doctor, a very active on Twitter Welshie living his life in the English West Country and the second person is Malgorzata Cerlich, aka MC, based in the mining region of Silesia, Poland. The interview with Malgorzata will follow in a few days.

Squash Mad: Hi Jon
JS: Hi Rosanna, thank you for taking the time to discuss stringing with me!

SM: How long have you been stringing?
JS: I’ve been stringing since the age of about 18 – a friend had a stringing machine at university in Cardiff which he used to let me use. I was a fairly heavy string breaker! I set up String Doctor in 2013 and now string around 800 – 1000 rackets per year.

SM: Which club are you based at?
JS: I am based at Exeter Golf & Country Club, where I play (when not injured) in the Premier League team. I am also the Club Captain, representing around 400-plus players. I am Head Coach (Junior Section) at Newton Abbot Squash Club too.

SM: Was it a natural transition to stringing or were you always interested?
JS: I started stringing out of necessity as I was a heavy string breaker. When I moved to the South West of England from Wales in 2012, I struggled to find a good stringer, and the one I did find then moved to France! So in 2013 I started stringing again regularly. I absolutely love stringing, so my interest in stringing has helped me cope with the number of rackets I’m sometimes given to string at short notice 🙂

SM: Why stringing (not refereeing or coaching)?
JS: I do actually coach too, with a few national level players and several county level players under my wing. I can normally tell how many rackets I’m going to be given to restring during a session… I have some big hitters in my groups! Refereeing? I referee a bit during league matches and sometimes get asked to at tournaments, but not sure I could travel the country/world like Roy G and John M. They take some real abuse… it’s a tough life as a referee!

SM: What fascinates you most about the art of stringing?
JS: I string mainly squash, but also large numbers of racketball, tennis and badminton rackets too. What fascinates me? Probably the diverse and intricate string patterns and the number of different string setups available. I absolutely love making rackets play (and most definitely look) better! I also test strings for some of the bigger string manufacturers and it’s amazing what goes on behind the scenes to create the best strings. Being able to advise players based on playing/coaching and stringing experience means that (hopefully) I can help improve their game with strings/tensions that suit them best.

SM: Can we actually qualify in stringing in the UK?
JS: Yes, any stringer who wishes to push themselves further, learn more about the technicalities of strings and rackets, can go on courses and then take exams. Nick Down heads up the ERSA, which is a worldwide stringing association and the main authority is Squash and Tennis. I would advise contacting Nick, via the ERSA website –http://www.ersa-stringers.co.uk/stringing-courses.html and Nick can discuss courses and exams. The head Wimbledon Tennis Stringer is also an ERSA qualified member.

SM: Do you have a mentor?
JS: My mentor is actually Nick Down. I’ve known Nick for a long time and he’s the most qualified squash stringer in the world, strings at all the big tournaments and has strung for something like 17 world number ones, including Mo Shorbagy, Ramy, Nicol David and the great Jahangir Khan. He’s got so many stories, it’s always good value speaking with Nick!

SM: If there is a problem with stringing, do you solve it yourself or do you seek help and support?
JS: Generally I solve it myself but sometimes it’s good to bounce ideas off other stringers, especially when a new string or racket arrives on the market. Nick’s my go to guy! I very rarely ask questions though unless I’ve tried every option first. Sometimes you have to make a few mistakes to learn a lesson – but never hand a racket back to somebody unless you know it’s been strung properly!

SM: Do you have your little stringing secrets?
JS: That would be telling… in all seriousness, not really. I have my own way of weaving, and like to tie each knot my own way, which involves a double ‘over and under’. Not sure how many stringers do this, but it’s my chosen method. I know a few ‘tricks of the trade’ through stringers like Nick. I’d be happy to discuss with anybody who’s curious, or you can learn them from Nick in courses.

SM: Do you have your favourite racket to be strung and favourite string (which ones)?
JS: I really like stringing Prince Power Rings. I just love the design and the pattern. And although most look the same, there are very subtle differences. In fact, I actually passed my ERSA Master Professional Stringer final exam on a Ramy AirStick, which is now hung up on my son’s bedroom wall! Favourite strings are Tecnifibre X-One Biphase. Not the cheapest, and not the most durable, but they are so nice to play with (very good power, comfortable and thin enough at 1.18 to get plenty of control). I also like RAB Razor Fibre, the thinner version of Sensor Fibre. I have to say that Ashaway strings are the most beautifully manufactured in terms of detail.

SM: What is the model of the stringing machine you use?
JS: I’ve used most machines either at tournaments or when stringing with Nick, but I opted to buy myself something slightly less bulky and easy to travel around with at short notice. The main machine I currently string on is my Gefen Sport GS2000 Pro which is customised with a few bits and pieces, including an electronic tensioner so that accuracy is assured. The machine is very nimble and quick to string on.

SM: Which racket, in your opinion, is the most complex/difficult to string and why?
JS: Aside from the Prince Power Ring rackets, rackets with ‘Fan’ stringing Patterns, such as the Eye Paul Coll racket can be fiddly due to the fan string pattern/shared grommets at the bottom. This means that it’s not just a case of stringing up and down on the main strings. There’s a formula of skipping grommets at the top. Also, you should always string a racket’s cross strings from top to bottom (to protect the frame and maintain an even tension). For this racket you need to do a slightly more intricate ‘Around The World’ type pattern… that is, if you want to string it properly and not cut corners! Get in touch with me or speak with Nick at one of his courses to find out more.

SM: Which strings are the best in your view and why?
JS: There’s not really a best string, or personal choice but, on balance, the majority of PSA players are currently using Tecnifibre 305 (green) 1.10mm or 1.20mm strings, closely followed by Tecnifibre DNAMX (black), so I guess that gives a pretty good clue. Other than Tecnifibre, Ashaway strings such as ZX (orange), Powernick (red) and Ultranick (blue) are also very popular.

SM: Do you have devoted clients who can’t live without your stringing service?
JS: I’d like to think so! I have a few pros and very good players who I string for frequently. Mike Harris, Pro squash player/coach and UK racketball champ, uses my service a lot! I also have a lot of juniors including my own son Ioan, who plays for Wales, who are regular string melters! My son is very funny. He literally just passes me his rackets without even looking at me or saying anything. I think he feels like he’s got his very own pro stringing service! He always thanks me, though, so that’s good!

SM: Tell me more about your website  How useful do you think it is for other stringers?
JS: I set up my website as a bit of a resource for stringers and also players, to give them more of an idea about strings and stringing in general. I also have a blog section where there’s a mix of analysis, reporting and also some Pro Player Profiles. I’ll be updating it whilst on holiday. I’d love Mo Elshorbagy to do a player profile for me. I hear you’re pretty close to the Baggys. Perhaps you could pull a favour for me 😉

SM: The biggest dream related to stringing?
JS: I would love to string at the British Open, but schedules and my son’s own junior diary seem to make this hard. I was on standby this year, but Nick and Liam Nolan coped fine during the week without the need for a third stringer. I would absolutely LOVE to string at Wimbledon. I speak with the head Wimbledon stringer every now and then and by all accounts it’s absolute carnage!

SM: The biggest dream related to squash in general?
JS: I would really like to see a Welshman at Number 1 in the World. With Joel Makin’s work ethic and ability, you never know! My son reached his goal of playing for Wales, which was a very proud moment for me. I would also really enjoy spending time with Jahangir Khan, my all time squash hero. Reading 555 by Alan Thatcher and Rod Gilmour is therefore a must!

SM: Thank you Jon for this interview and all the best for the future. We will be sure to keep an eye on Joel’s progress up the rankings (and your son’s).

Related article: Joe Magor reveals the secrets of Gregory Gaultier and his strings

Rosanna is proud mother of two young squash players, a talented linguist and translator, and a popular writer on the European squash scene. Based in Bristol.