Guest Contributor December 30, 2013 No Comments on The World is Not Enough for Matthew as he targets gold trail 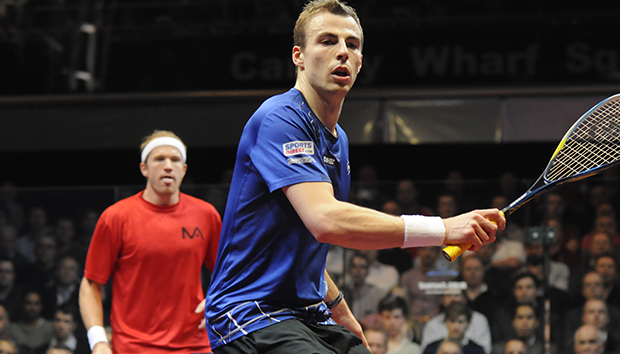 While a fourth World Championship title in 2014 would be a dream come true for Sheffield’s world number one Nick Matthew, he explains to Phil Harrison that his main priority lies elsewhere

NICK MATTHEW freely admits he achieved more in 2013 than he had originally hoped for – borne out by him returning to the world number one ranking on top of the third world championship title he had craved above all else when the year began.

Once again, the 33-year-old from Sheffield has set out his stall for the year ahead, although this time the world title isn’t his main focus while, somewhat surprisingly to some people perhaps, the world ranking is not something he will be paying a great deal of attention to.

Top of Matthew’s Christmas wishlist for 2014 is a piece of gold – in the shape of another Commonwealth Games gold medal, adding to the two he won in Delhi, India back in 2010.

On that occasion, Matthew defeated fellow Yorkshireman James Willstrop in the singles before going on to lift the doubles title with Adrian Grant by seeing off the challenge from Australian pair Stewart Boswell and David Palmer.

This time around Matthew will be on home soil – of sorts – with Glasgow playing host to the 20th Games. And while any kind of success that comes his way as he enters his 34th year will be welcomed, Matthew is focused on Thursday, July 24 when the squash action begins at Scotstoun Sports Campus.

“To be honest, I didn’t expect to have such a great year back in January,” Matthew told the Yorkshire Evening Post. “The Worlds was a big target for me at the start of the year, it always was – that was pretty much all I was focused on.

“Returning to No 1 in the rankings wasn’t even on the agenda, not something I was considering – the world title was the big one for me.

“I’m not under-valuing being world number one in the slightest, but you get remembered more for the titles that you have won, particularly if they are world titles.

“It is great to be remembered as a world  number one as well, but nobody remembers or cares much after you’ve stopped playing how many times you got there or for how long you stayed there.”

For Matthew, it still rankles that the sport missed out on Olympic status earlier this year for a third straight time – a feeling shared by many in the sport.

As a result, he regards the Commonwealth Games as the nearest his beloved sport currently gets to competing in something close to the self-styled ‘greatest show on earth.’

“Even though the Commonwealths are not as strong as the world championships in terms of the quality of players on show, it’s still a global event that transcends everywhere,” added Matthew.

“It will have a big impact and because of the coverage it will get on TV – that can only be good for the game as a whole. 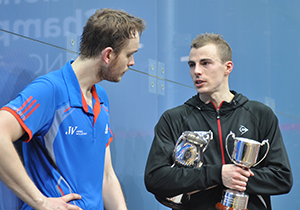 “For me, I think it’s the biggest title in squash – for the players, it is our Olympics. They are the  No 1 target for me next year and I think they will be for a lot of people. Everything else that comes along in terms of success will be a welcome bonus, including the worlds.”

Matthew’s fierce rival Willstrop (pictured right in blue) shares that view, believing that the Commonwealths present a rare opportunity for squash to spread its appeal across a global stage.

“It’s a prime target for players in England and we have been preparing hard over the last months with this event in mind,” said Willstrop.

“Multi-sport games are unique and since this is squash’s biggest involvement on this type of stage, every squash athlete takes the Commonwealths very seriously indeed.”