Guest Contributor May 22, 2020 No Comments on Thrills of dusting off rusty skills as Aussies celebrate return to action 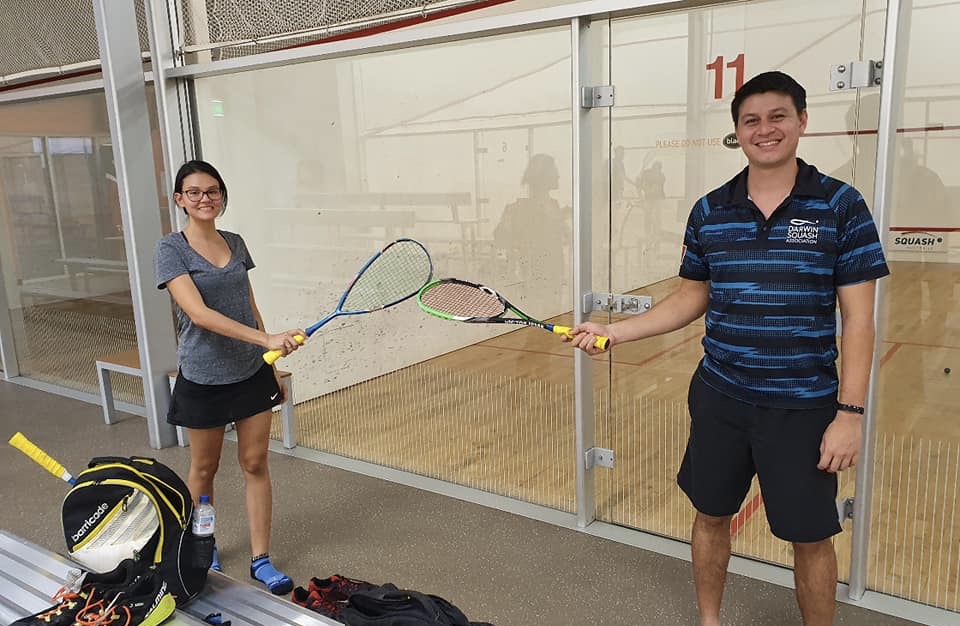 Players celebrate their return to court in Darwin, Northern Territory

Squash returned to action on the courts across Australia over the past week with Northern Territory and Western Australia having restrictions eased that enabled players to return to the court in some capacity.

Northern Territory launched into action on Saturday with a handful of players returning to the court with the State to keep its courts open across three days each week for the interim.

Players took to the courts with great excitement and could not wait to dust off their rusty skills to enjoy some form of competition.

The State was rewarded by the government with an ease on restrictions on the back of recording zero cases of COVID-19 in the weeks leading up to Saturday, a pleasing sign for members across the State who took all the right safety measures and played a key part in seeing restrictions eased.

Western Australia celebrated the benefits of reporting few cases in the past four weeks with an easing of restrictions across their courts.

Players recently returned to the court in some centres across the State and more will be trip-fed to other Centres this weekend and into next week.

While Centres are starting to open in Western Australia, players can not compete in any matches and only return to the courts for training purposes only. Players are required to keep a minimum of 1.5 metres apart while on court and adhere to the COVID-19 guidelines set by each centre.

While Northern Territory and Western Australia have returned to action, it appears other States are not too far away from joining them.

The Australian Capital Territory (ACT) will move into Stage 2 on Saturday, May 30 with Squash Centres permitted to have up to 20 people in the building.

South Australia had initially planned to move to Stage 2 of restrictions on Monday, June 8 earlier this week the Government made the decision to move into Stage 2 on Friday, June 5 ahead of the Queen’s Birthday Long Weekend.

This is great news for all across South Australia who are encouraged to support local local businesses across the long weekend and Squash Centres will open in the process with up to 20 people permitted in the Centres at any one time.

Queensland is not too far behind South Australia with Centres permitted to open on Saturday, June 13 with a maximum of 20 people in the Centre at any one time.

Australia will see its three remaining States make some positive movements in heading towards Stage 2 restrictions in the near future.

The feeling around the country with the sport is looking positive, but it is a testament to the incredible work from Australia as a nationwide community who have maintained social distancing and stayed at home during this period.

It was first thought that when Centres and the Nation went into lockdown in March that we as a nation would be in this situation for a minimum of six months. Less than two months later, Centres opened and the COVID-19 curve immediately flattened.

Squash Australia and its Centres look forward to more exciting developments in this space over the coming weeks.

Stay safe and for more details about SQA’s stance on COVID-19, check out the following link: