World number one Nicol David produced a devastating display to thrash fellow Malaysian Low Wee Wern 11-5, 11-3, 11-4 and advance into the semi-finals of the Tournament of Champions in New York

David, who has not lost since the British Open final in May, needed just 32 minutes to sweep past Wee Wern at the Grand Central Station and extend her her undefeated streak to 25 matches on the WSA Tour. 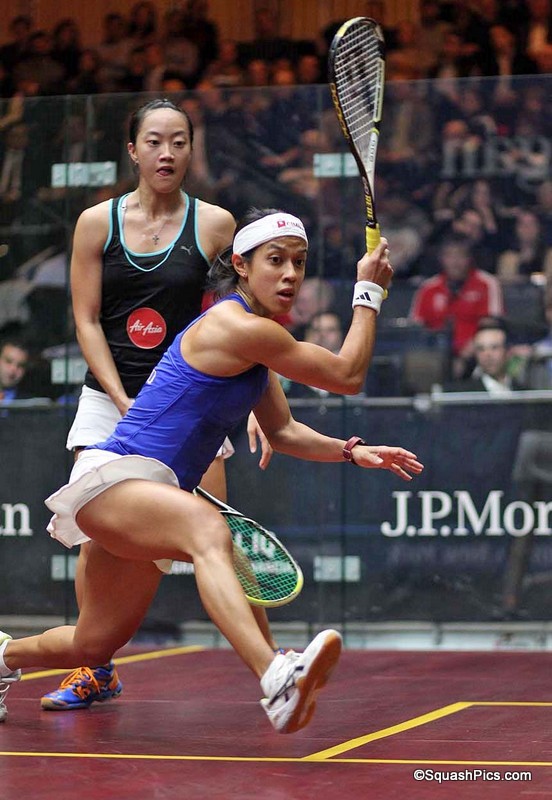 The 30-year-old top seed (pictured left) will face world number four Alison Waters for a place in the final, after the 29-year-old overcame qualifier Sarah-Jane Perry in straight games in an all-English clash.

Perry, who knocked out Jenny Duncalf in a gruelling five game encounter on Wednesday evening, struggled to contain an inspired Waters who powered to an 11-5, 11-6, 11-2 success in just 28 minutes.

Waters, who has not featured in a WSA Tour final since the KL Open in March, will now be hoping to avenge her semi-final defeats to David at the Hong Kong Open and British Open last year.

In contrast, David will be looking to gain the outright record for most WSA final appearances, after equalling Sarah Fitz-Gerald’s record of 90 in Hong Kong last month.

Serme, 24, admitted to being concerned about Perry’s superior head-to-head record prior to their last eight meeting but seemed unaffected by any psychological doubts as she eased through the opening two games.

However, the world number eight squandered three match balls in the third game and even celebrated a premature victory with a jubilant fist pump, only for Perry to run down a shot and catch her opponent unaware.

“I got nervous,” said Serme after the match. Perry proceeded to halve the deficit with an improbable tiebreak victory but the French number one recovered her composure to ease through the fourth game and seal an 11-8, 11-4, 11-13, 11-5 win.

“I knew that I had to stick to my tactical plan,” revealed the French number one.

“The plan, which had worked in the first two games, was to slow down the pace. I did not want to give her any opportunities to hit the ball hard which she does so well. And I had to play my shots when I had the opportunity.”

Serme’s reward is a semi-final meeting with world number two Laura Massaro of England, who was a few millimeters away from trailing new world number five Joelle King by two games.

King, who edged the opening game 11-9, secured a game ball at 11-10 in the second to extend her advantage over the number two seed.

However, a tinned drop shot ultimately proved her undoing as Massaro levelled the scores before easing through the next two games to progress 9-11, 13-11, 11-3, 11-7 in 52 minutes. 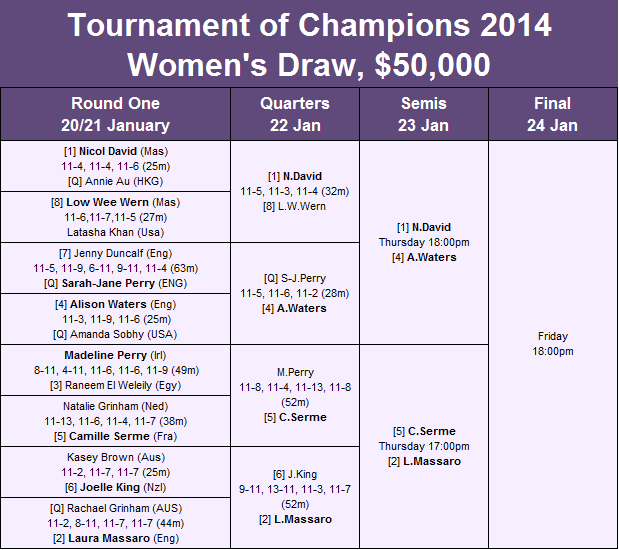