Tony Grifin April 27, 2020 No Comments on Tony Griffin and Gevolution: Measuring change in squash and how your brain learns new skills

How do we measure real change in squash? Is the level of change a reflection on the player’s ability, the coach or the system we use to teach squash?

If a player doesn’t improve and acquire new skills should we send them to another sport? It is easy to blame a person’s lack of change on their own inability and not look further.

I know coaches are genuinely interested in helping players improve and sometimes the frustration of not achieving change can lead to an indifference when coaching.

When I started delving into the sports science world I saw that their work and research often evolved around controlling change either with equipment monitoring body processes or measuring distances, speed and precision etc. to confirm the effectivity of different training processes.

The research group confirmed that squash is one of the most complicated sports to measure given the huge variety of shots, positions and player differences. They suggested visual and personal (player) appreciation of change could be a good starting point to evaluate trial results.

Another recurring question or challenge is understanding the path from change to the retention of new skills.

With these ideas in mind (including the previous article) we have prepared an innovative course for players and coaches combined.

The course focuses on women’s squash but the COVID-19 situation has put our plans on hold. The shutdown has also postponed the initial trial with a Neuro-rehabilition Hospital in Barcelona. We have to be patient and are ready to start as soon as the world starts rolling again..

To give you a real flavour of what it involves, the Gevolution course comprises two weekends with six weeks’ space in between. The second weekend is to consolidate and add to the work done and importantly to evaluate changes in levels as players adapt to the objectives. The players will do four 90-minute sessions (one Friday afternoon, two Saturday and one Sunday morning)

For the players we will work from a base of fine motor skill exercises that range from precision hitting of the ball to the fine body movements and look at how eyes condition both of these skills. We will also build an awareness of the wide motor skills movements like the swing, body position and court movements. Clarity with these movements is an important part of our bodies’ organisational process. We will work primary movements of all the shots and use conditioned games to help develop and understand these skills.

For example, differential learning* could be likened to that famous female ability of multitasking – we do a low number of repetitions and then change exercise and later return to the exercise. This proven concept is just one of the core factors that adds to higher levels of improvement and new skill retention.

Here is a short clip one of the exercises https://www.youtube.com/watch?v=XPmsiqAVVxU

We will introduce the players to the A-Champs Roxs Training system that enhances many of the Gevolution core concepts.

The players will have a series of very simple exercises to do over the six weeks following the first weekend until the second part of the course. We ask the players to document the number of times they have done these exercises and the times they played/trained over this time.

There is no obligation for the players to play more or less squash. We’ll look at the level of change and see if there are any patterns related to the process in itself, and if there are differences that can be related to the amount of practice each player has done or not.

The second training weekend has various objectives. There are too many new ideas for anyone to assimilate them all after just one weekend so we will reinforce the new concepts worked on in the first part of the course. With the feedback from each player we will evaluate the level of change in each player and then share a plan of the following months.

We will introduce new exercises. The second part is also an important stimulation and motivation for players to maintain a higher level of attention in the new concepts and movements over the six weeks between weekends.

For Gevolution, the coaches’ learning path is also a challenge. We want to ensure that new Gevolution coaches achieve the same results and changes that we are seeing.

After Xavi Blasco had started working with the Gevolution process I commented to him (being cautious) that I was seeing clear changes in all the players after eight weeks’ training (with maximum one session per week). He replied “Get off! Most of my players are changing in four weeks!”

This is our objective and we are clear that the simple transfer of information does not necessarily guarantee better coaching. Us coaches also have our own doubts and insecurities when we are trying different or new processes.

Recognising my own insecurities when experimenting with these sports science concepts, and following the progress the first coaches who have started working with the Gevolution process has given us a clear base to be able to accompany the coaches on this new path of learning.

Our first challenge is a willingness to accept change.

There will be two parts, the theoretical and the practical. There will be a theoretical session of one hour for the coaches before each training session. We will look at how the Gevolution process has been developed and evolved, and understanding the sports science concepts which are the origins of this innovative learning process. This will help the new coaches understand and evolve faster.

This understanding will also will help them to avoid exercises and experiences that we know are not as effective. Every coach also has their own learning process. Each theoretical session will cover new concepts and preparation for the next session.

The practical part for the coaches is that they will assist with the coaching of the players in each session of the course. This way they start to build their own confidence with the new exercises and core concepts. They will have the opportunity to see different characteristics of multiple players and how to adapt the Gevolution process to each one.

One of the most rewarding aspects of working with more coaches is that once the understanding of the Gevolution core concepts is added to their own personal experiences they bring new visions or ideas and become contributors to this collective and ongoing learning process. 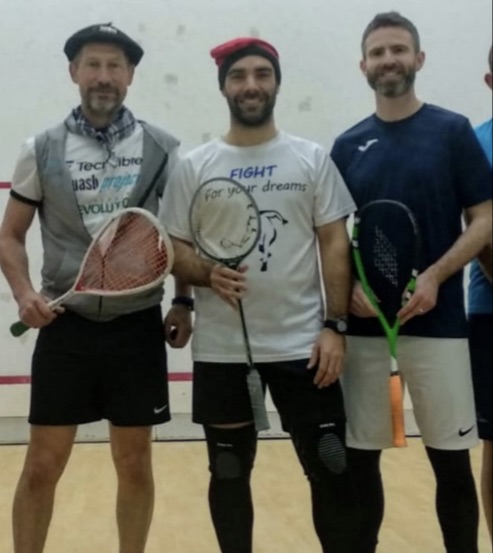 Tony with Gorka and Darren (right)

Gorka Arretxe, Squash Coach and Manager of Lur-Alai Squash Club, Irun (Basque Country), said: “I think it is a more direct way of teaching and brings squash closer to new players. It is more tolerant, dynamic and attractive for people who want to try and learn our precious sport.

“It shows the incredible ability of the human mind to adapt to circumstances and situations on the court. Squash must evolve so as not to fall behind and the Gevolution project gives us a clear path to follow and hope.”

Darren Lynch, from Ireland, Squash Coach at Vitoria-Gasteiz (Basque Country), added: “Gevolution puts a different spin on Squash. How to watch the ball? Something so simple but never taught.

“Understanding it and really focusing on the ball, I felt a near perfect state of relaxation while playing and saw how this conditions our movement, making it smoother and natural as well as striking the ball well from all angles of the court.

“The day after the course I started using Gevolution in my classes and the players loved it.”

Tony Griffin is a squash coach from New Zealand who is now based in Barcelona. Author of the squash manual The G-Spot, A Book About Squash. He is now exploring new ways of coaching the beautiful game. Claim to fame? He was at courtside as his friend Ross Norman won the World Open title in 1986. And is now Luxembourg National Coach.