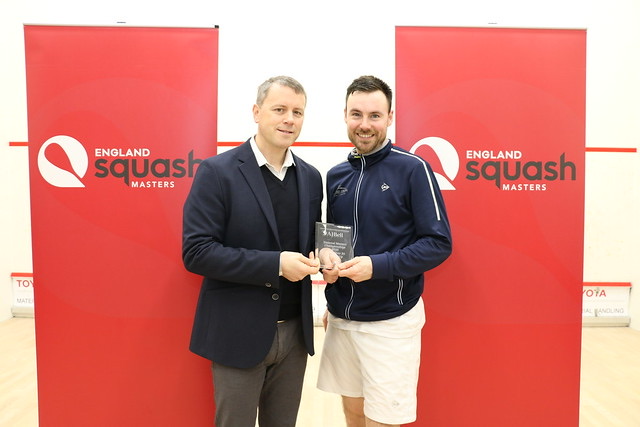 Phil Rushworth receives his national over-35 runners-up trophy from Keir Worth, Chief Executive of England Squash

Leading coach Phil Rushworth, British Nationals Over-35 runner-up and the man who drove Daryl Selby to hospital after his eye injury in Nottingham last week, is supporting the campaign to debate eye protection in the game.

Rushworth, Head Coach at Wimbledon Racquets and Fitness Club and South East Aspire coach for England Squash, knows all too well the impact caused by even the most minor impact of a squash ball on the eye.

He suffered a detached retina following a coaching incident – but it was so innocuous that he hardly felt a thing and was unaware of the damage for three months.

He said: “I was coaching an adult group and one of them bounced a ball towards me and it hit me on the cheekbone and the eye socket.

“I didn’t think anything of it until three months later when I went to the opticians for a general check-up.

“They spotted something and sent me to Kingston Eye Clinic, where they detected a tear. The specialist didn’t know I was a squash player but the first thing she asked me was ‘Have you been hit in the eye with a squash ball?’

“They in turn sent me to Moorfields Eye Hospital in London, where they detected a detached retina in my right eye.

“I had not been aware of any problems in the previous three months and had forgotten all about it.

“It was in 2013 and our first child was about to be born and my priorities were obviously elsewhere. But they said to me ‘If you have the slightest knock on the eye you could lose your sight permanently’. So, two days later, I had an operation at Moorfields to sort out the damage.”

Ironically, Rushworth was in the opposite corner, coaching Ollie Pett, during the National Championships first round tie when Selby was injured.

He said: “Ollie was clearly concerned and it I think it may have brought back some memories of something that had happened to him during his junior days. 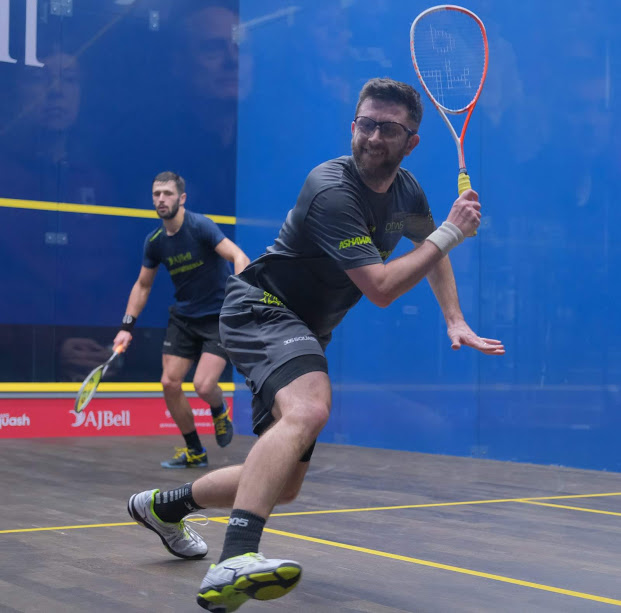 “I saw Daryl at courtside and his eye looked bloodshot. He held some ice to his face to take the swelling down from the bruise.

“He had as much time as he needed to recover and, because it was a complete accident, he guessed Ollie would go through if anything meant he was unable to play.

“The shot that Daryl played, down the middle of the court from the front left is a shot being used more often by players to wrongfoot the opponent. Quite often this leaves the opponent with no choice but to hit a shot from behind their back, and therefore leaves the player at the front of the court in a vulnerable position. It was like slow motion as the ball skewed off Ollie’s racket and hit Daryl in the eye.

“Naturally, Ollie was very upset afterwards but Daryl tried to reassure him and told him he would have done the same thing and reacted in the same way with a shot behind his back.”

Rushworth, who was runner-up in the over-35 final to RAF player Sam Miller in the Nationals, understands the reasons why nearly all professionals refuse to wear eye protection while playing, despite the obvious risks.

He continued: “Wearing goggles will give you a level of comfort and reassurance about your safety but it could also affect your concentration.

“At the top level we talk about small margins and if you are performing two to three per cent below your best you might lose because of issues with your peripheral vision or your goggles steaming up or getting covered by sweat.

“Between rallies you will be wiping your goggles instead of focusing on your game.

“That could be the difference between a 3-0 win or a 3-0 defeat. In professional squash, it therefore has to be a level playing field. It’s got to be a rule for everybody. All or nothing.

“If one player is wearing goggles and the other opts not to wear them, to make sure there are no distractions, that player has an obvious advantage.

“As for myself, I wore goggles for a week or so after my operation but pretty soon stopped because of the distractions.

“Maybe this issue will prove to be the catalyst for some serious debate on the subject. Importantly, this time it will involve professionals as well as club players.

“If both players have to wear goggles, both will have to accept it. That way you are not giving one player a bit of an advantage. You simply can’t do that in world-class sport so any rule change must be fair across the board.”

Looking at the bigger picture, Rushworth feels that it would be beneficial for the game to look at two key issues affecting the sport right now, eye protection and the use of the correct ball for recreational players.

He added: “The risk of eye injury might well put new people off playing the sport, so it’s an issue that needs a sensible plan of action.

“At the professional level, the game is faster than ever and players need to have their full powers of concentration switched on to maximum to cope at that level.

“However, to be honest, at club level I’m surprised we don’t see more eye injuries with so few adult players choosing to wear protection.

“As coaches, one of the mantras we drum into young players is ‘Never take your eye off the ball’.

“So if that is the case we really ought to be taking eye protection more seriously.

“If the pros wore goggles, club players would soon follow.

“And you might say the same with players using the double yellow dot when in some cases it may be more appropriate for them to use a single dot ball.”