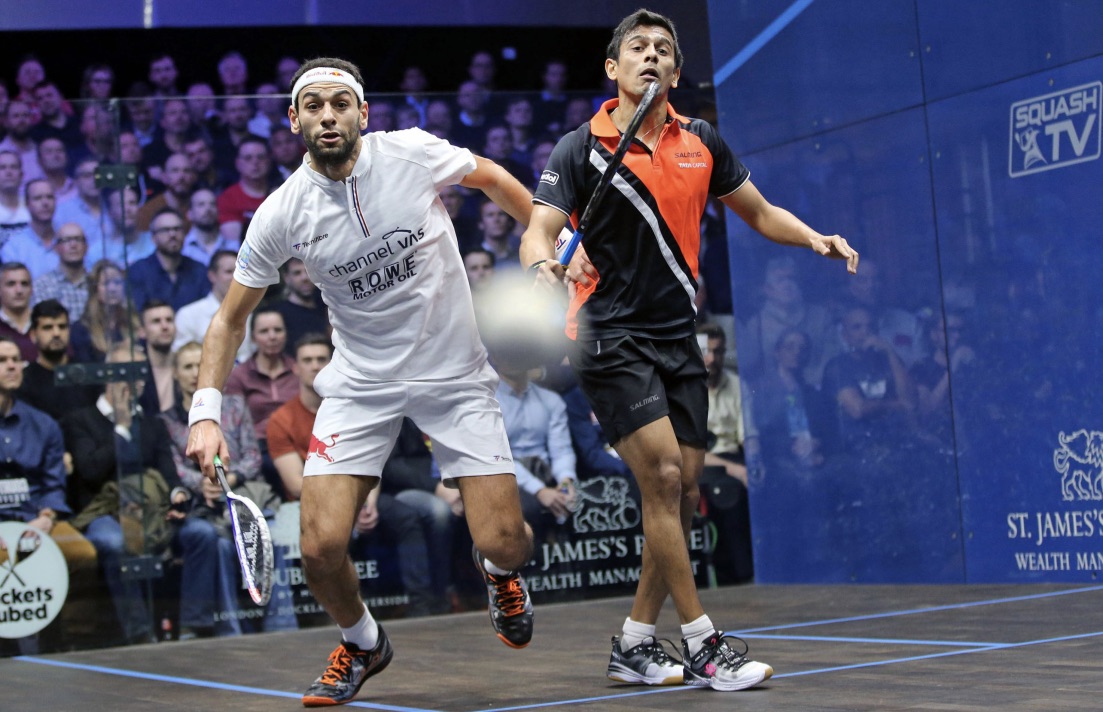 Egypt’s World No.1 Mohamed ElShorbagy is through to the semi-finals of the St. James’s Place Canary Wharf Classic after surviving an incredible fightback from India’s Saurav Ghosal in a nailbiting last-eight clash.

ElShorbagy looked to be in a comfortable position as he held match ball 10-5 in the third game. But Ghosal battled back to draw level in front of a packed crowd at the East Wintergarden, facing five atch balls in the process.

As the audience cheered every point that Ghosal put on the board, ElShorbagy was warned for time wasting.

However, at 10-all, Ghosal put a volley into the tin and lost the match on a penalty stroke to allow a very relieved ElShorbagy through to the semi-finals.

The pair had met at the Channel VAS Championships in November, where ElShorbagy snuck the win in a fifth game tie-break.

This time around the Egyptian took a strong lead in the first, only for Ghosal to hit back and take it 13-11. But ElShorbagy started strongly in the second, going on to level up the match.

Despite Ghosal’s heroics in the third, ElShorbagy clinched his fifth appearance in the semi-finals at Canary Wharf, dating back to 2012.

Afterwards ElShorbagy paid tribute to Ghosal but was upset by some booing from sections of the crowd.

He said: “Saurav has been in good form this tournament. To beat Simon (Rösner) who is also playing good squash at the moment, and then he was only two points away from me. I am really happy to see him playing well because he was struggling with his body.”

Regarding the booing, he said: “I am very disappointed, not at the match. We train so hard to be on court in front of everyone and we kill each other for you, so if one of us gets booed it is really disrespectful, for both of us.

“We fight so hard for everyone to give such an exciting match and it is not a nice feeling for anyone when someone gets booed, because when we shook hands, there was so much respect between both of us. We appreciated what we had done to each other!”

ElShorbagy’s victory ensures there will be a repeat of the 2018 final and last year’s semi-final when he meets current world champion Tarek Momen tonight for a place in the final.

Momen produced a highly focused and disciplined performance to make his way through to the last four after getting the better of Peruvian World No.6 Diego Elias 11-8, 8-11, 11-6 in the first match of the evening.

For 40 minutes, the pair battled it out in a high-paced, high-intensity affair, with both players finding their range early and hit some spectacular shots throughout. Momen clinched the opening salvo, thanks to some wonderful play in the front corners, keeping the ball tight with Elias struggling to return the drop shots the Egyptian was putting in.

He found a way to switch it up in the second, and his power play was enough to take the match into a decider but it would be Momen who took the win, as he stretched out a lead in the third.

“I am very happy with the way I played today. A much more focused performance, not too many errors, which is what I look for. I think I played really well throughout the whole match,” Momen said.

“The errors I made in the second were not unforced, it was more the high pressure rallies that we were playing. It got to me for a small part and you only need one or two points to change the momentum.

“I was happy with my short game today. For a while I was not so sure if I was at the top of my game in that department. It was still very good but not at the level I wanted, but today I was very close to how I want it to be, so it is a positive thing.”

Completing the all-Egyptian line-up in the last four of the St, James’s Place Canary Wharf Classic will be World No.2 Ali Farag and World No.8 Marwan ElShorbagy who will meet in the second semi-final tonight.

The younger ElShorbagy, who has moved back up to World No.8, needed just 11 minutes to take the first game, as he restricted Lobban to just three points as he featured in his first PSA Gold quarter-final.

The Scot, currently World No.27, fought back and started the second game well, giving the crowd hope of another upset, but Elshorbagy wrapped up a straight-games win in under half an hour.

Marwan said: “Greg had a great win yesterday against Gawad, so I knew how dangerous he would be today. He has been working with Nick Matthew and he has been having a great season.

“Switching to best of five for the semi-finals, I don’t think the players will go as fast as they did today. It will be different. Best-of-three brings different tactics for each player so tomorrow I will approach it differently and let’s see where it goes.

“Coming into this tournament, I don’t think I had the best preparation, but the most important thing was to get myself back to where I want mentally. Hopefully, tomorrow I will play some of my best squash.”

ElShorbagy meets World No.2 Ali Farag, who advanced to the semi-finals as compatriot Fares Dessouky was forced to retire through injury in their quarter-final clash at East Wintergarden.

The final match of the night carried on in the same vain as the three before it, with a high-paced encounter. Both men started strongly, with some breathtaking, attacking squash matched by some phenomenal retrieving. Farag was happy to take the first on a tie-break, but Dessouky came roaring back in the second.

The World No.12 was able to find his range in the second, and play some incredible shots. Farag was reluctant to feed his forehand volley, but Dessouky conjured up plenty of other sensational winners to level the match.

However, the game had a disappointing finale. In the early stages of the third game, Dessouky started to hobble in between points, and he eventually collapsed to the floor with Farag leading 5-2.

On an emotional evening, with the crowd fully involved in every match, referee Jason Foster was not the most popular man in the building as he enforced the rules surrounding cramp and Dessouky was forced to concede.

Dessouky was in tears as PSA Tour physion Derek Ryan entered the court to offer his help. After Dessouky was helped off court by Ryan and PSA official Lee Beachill, Farag said: “I am sorry for Fares. He had an ACL injury a couple of years back and the way he has come back onto the Tour, it shows how strong a character he is.

“I hope this is nothing remotely as serious as the ACL, and hopefully he can heal soon because he is a great addition to the Tour. In the first game I tried to match him toe-to-toe in the front corners, but he is a lot more skilful than I am. I had to be disciplined and to force errors from his racket, and that is sometimes the plan against more skilful players.

“I did not use the front two corners in the second game, but in the third I think I was starting to find my balance a bit better. I heard him say that nothing popped which is a good sign. I hope he recovers very quickly.”

Reverting to a best-of-five format, we are sure to see more patient patterns emerge after the frenetic, high-energy best-of-three battles that have produced some incredible excitement and entertainment in the opening four days.

All four players are now into their stride, and at this stage it will be down to who delivers the more quality on the night.