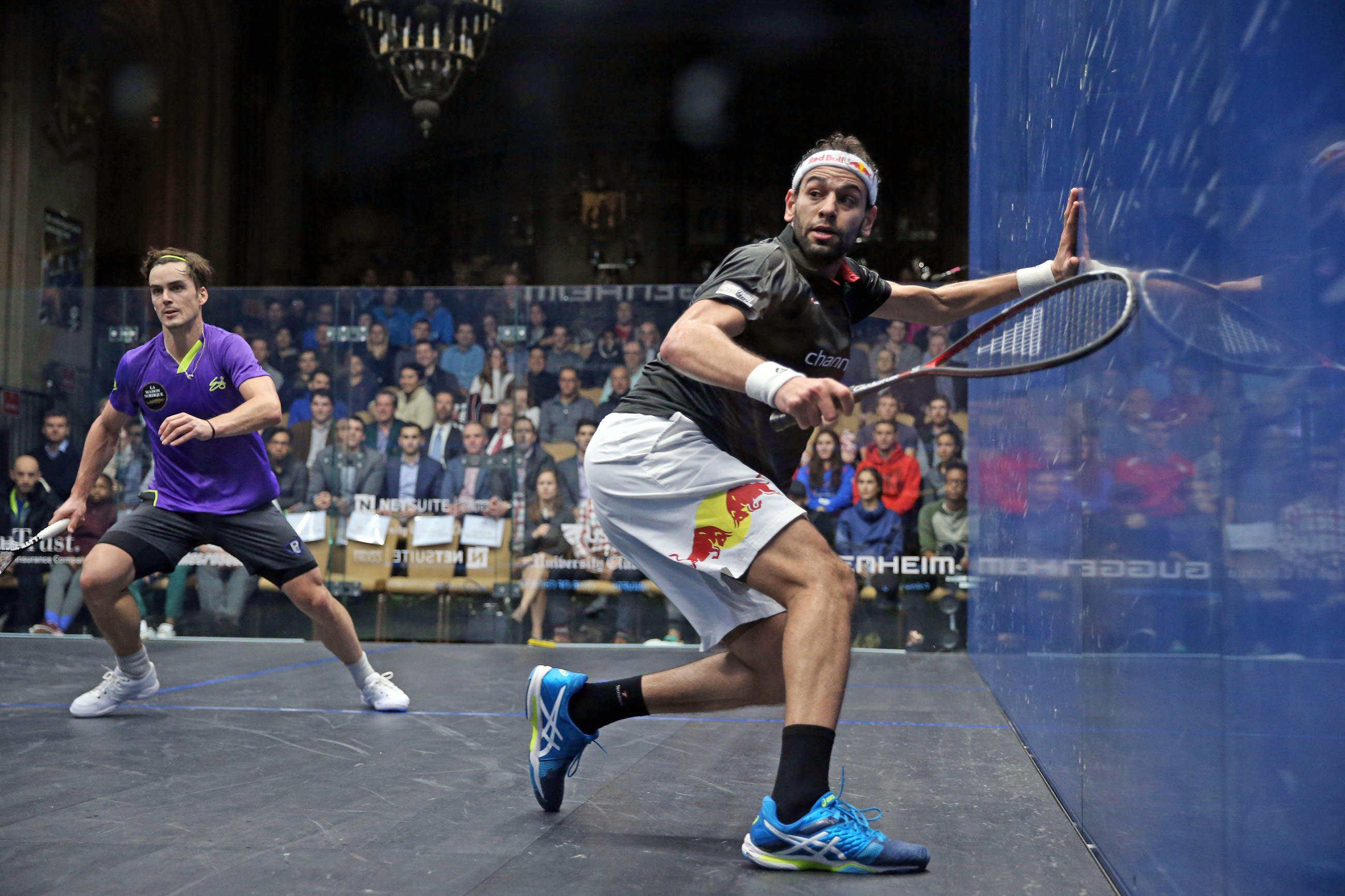 Defending champion Mohamed ElShorbagy began his 2017 Windy City Open presented by Guggenheim Partners and EquiTrust Life Insurance Company campaign with a winning start, coming through an epic 94 minute battle with New Zealand’s Paul Coll in one of the best matches ever seen inside the University Club of Chicago.

The duo engaged in rally after rally of attritional, high quality squash from the off but it was the World No.1, after saving two game balls in the opener, who looked to be on his way to a routine straight games win after going 2-0 up.

Coll, though, showed the skills, determination and physical strength that has catapulted him into the Top Twenty as he fought back in style, taking the third and fourth games to force a decider.

Coll then raced into a 3-0 lead in the fifth but ElShorbagy mounted one more charge, managing to squeeze the decider 11-7 to set up a second round encounter with Mexican Cesar Salazar – the man who knocked him out of last month’s Motor City Open in a shock first round defeat.

“It was a very tough match today – Paul is a great player,” said ElShorbagy.

“I thought it was a very fair but very hard match. I think we both played it in the right spirit and maybe it was a bit of experience that got me through in the end.

“It was very tough mentally today. My season has been very up and down and it’s been hard to understand what exactly is going on. I was fighting myself today as well as him.

“I lost in the first round of my last tournament and today, having been 2-0 up and then going 2-2 and 0-3 down in the fifth, I was thinking it’s time to go home. But I told myself to push so to win that fifth game is something I’m very proud of.”

ElShorbagy was joined in the second round by domestic rival Ramy Ashour, the mercurial three-time World Champion making his first competitive appearance since injury saw him limp off court during the 2016 World Championship final. 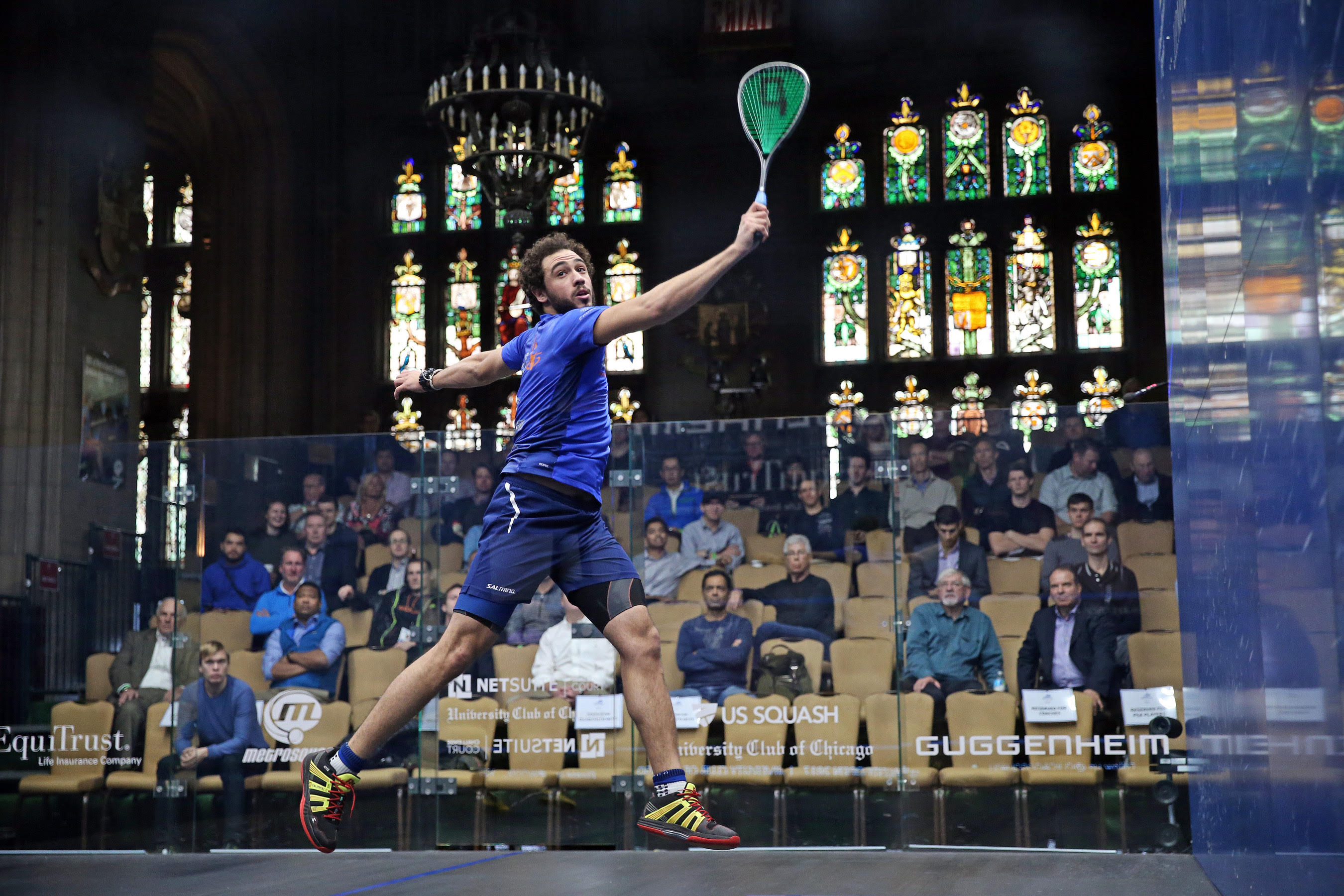 Ashour failed to take to court in December 2016 or January 2017 but played with free flowing abandon as he hit audacious winners for fun, dominating 37-year-old Olli Tuominen to complete an emphatic 3-0 win in just 23 minutes.

“It’s good to be back – it’s not easy, there have been a lot of ups and downs,” said Ashour.

“It’s hard to find the words to describe what I’ve been trough. Last night I didn’t think I would get up and get on court today to play – the more you get injured, the more mental scars you get.

“Sometimes its not about winning – now for me it’s just about not quitting. I just keep on trying.” 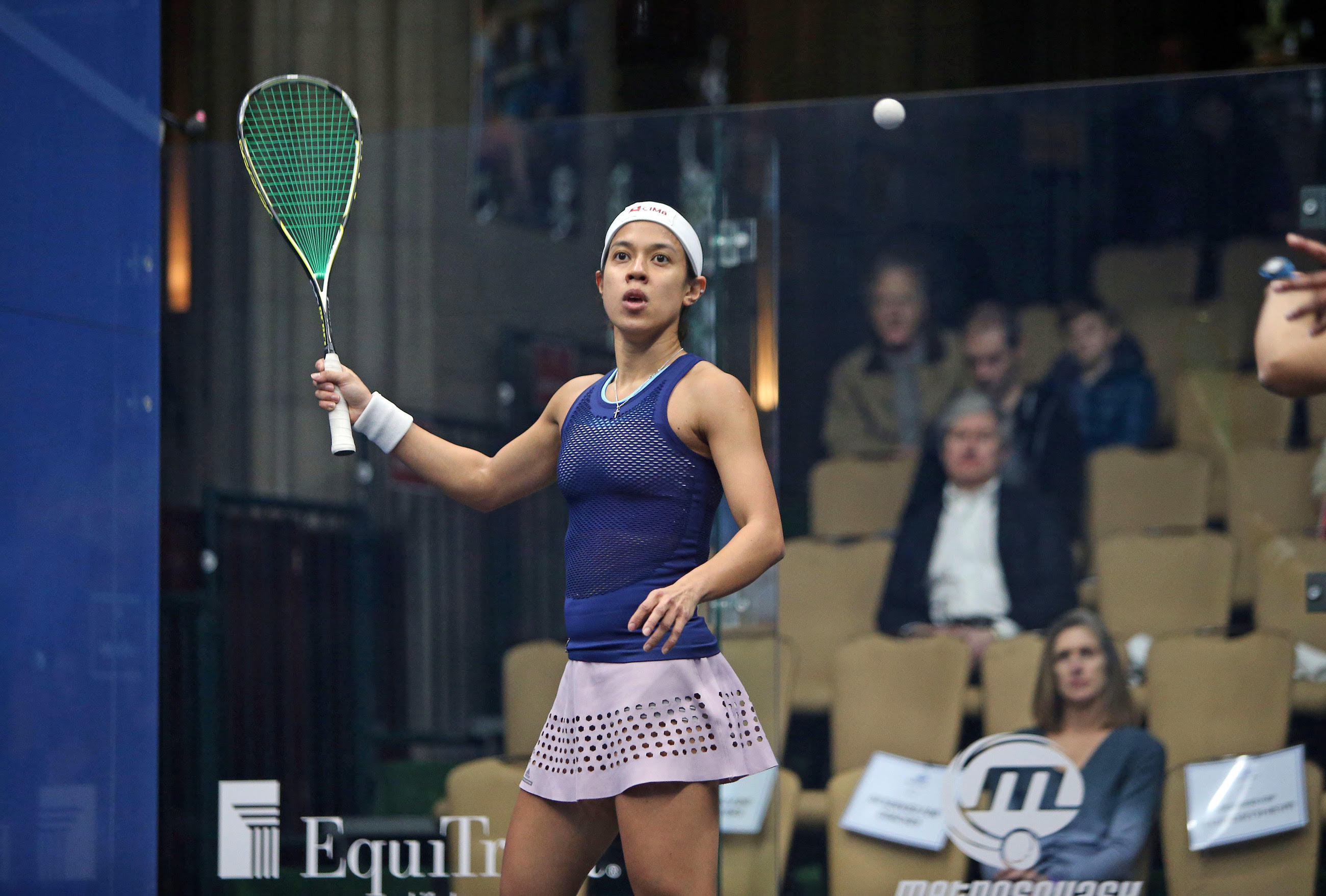 Nicol David battles through a tough first round

In the women’s draw, eight-time World Champion Nicol David, who has won almost every title going bar the Windy City Open, booked her place in the second round after successfully negotiating a potentially tricky encounter with rising Egyptian star Hania El Hammamy.

The 16-year-old El Hammamy came through qualification to reach the main draw but David’s class and ability to withstand repeated attacks were too good and she came through in just under 40 minutes.

“I really enjoyed the match,” said David – who will now face England’s Emily Whitlock for a place in the quarter-finals.

“She kept coming back and I just had to keep putting the pressure on her. It was very close so I am pleased to come through 3-0.

“When I was leading she relaxed and she hit some great winners and I maybe eased off a little as well. I had to step forward again so I’m pleased to be through and into the next round.”

David was joined by World No.1 Nour El Sherbini, who easily dispatched Nadine Shahin, and the in-form Camille Serme who extended her unbeaten streak to 10 matches in 2017 with a straight forward 3-1 defeat of Heba El Torky.

Serme, winner of the Tournament of Champions and Cleveland Classic so far in 2017, will face Tesni Evans in a compelling second round match while Victoria Lust, Alison Waters and Joey Chan completed the winners on day one.