Guest Contributor February 22, 2020 No Comments on Top seeds march through on day one of College Women’s Team Championship 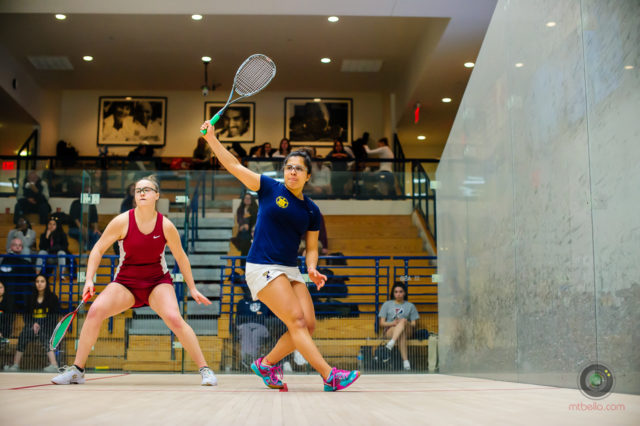 All five divisions had matches at Yale University’s Brady Squash Center in Payne Whitney Gymnasium throughout the day. Today (Saturday), some of the competition also moves to the Hopkins School across town.

The match results stayed relatively true to the seeding coming into the event, although there were a few close matches and one notable upset. The intensity should ramp up today when the semi-final matches get under way. Live streams of all courts and live scoring in the draws can be found on the Tournament Homepage.

Howe Division:
Despite many close results between the Howe Division teams during the regular season, the top four seeds advanced to the semifinals with relative ease. The closest match of the day featured the cross-country rivals Yale and Stanford, the 3- and 6-seeds, respectively. The match finished with a close 5-4 scoreline, but on the backs of two extra-point, five-game wins in the first wave, Yale clinched the victory by jumping out to a 5-1 lead. The contests between the top three positions were all close five-gamers with great squash on display. 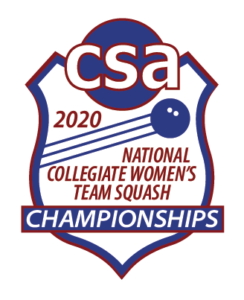 The other Howe Division winners on the day were top-seeded Harvard, second-seeded Princeton, and fourth-seeded Trinity. Harvard and Trinity cruised to 9-0 victories – against Columbia and Penn, respectively – and will meet in a top-class semi-final. Princeton jumped out to a quick early lead over Drexel and ran away with it for an 8-1 win.

Kurtz Division:
Similar to the Howe Division, regular season results between Kurtz Division representatives did not carry over to the match-ups featured. Once again, all four top seeds advanced to the semi-finals, and only one match had a close scoreline. In the 4-versus-5 match between Brown and Williams, Brown jumped out to an early 4-1 lead and looked in control. In the later waves of matches, however, Williams made a push for a comeback. In the end, Brown’s Danielle Benstock overcame Williams’s Melissa Swann in three games to clinch the victory for the Bears.

The top two seeds in the division, Dartmouth and Virginia, had smooth roads to the semi-finals with matching 9-0 victories. Third seed and defending Kurtz Cup Champion Cornell also moved on successfully by capturing a decisive 8-1 win over George Washington. Both semifinals will be rematches of close contests from the regular season and should provide some excitement this afternoon. 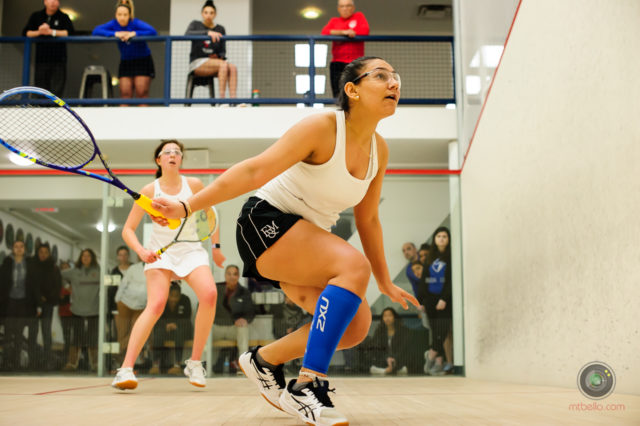 Walker Division:
The Walker Division teams were the first on court and did a nice job getting the action going for the rest of the day. True to form, the top four seeds also advanced to the semi-finals in this division, all with relatively comfortable scorelines. The closest match of the day in the Walker Division was the local rivalry between 2-seed Franklin & Marshall and 7-seed Dickinson, which ended in a 6-3 F&M win.Top-seed Amherst College dispatched familiar foes Hamilton by a 9-0 scoreline, and the Mammoths will meet another NESCAC rival, Wesleyan, in the next round. Wesleyan repeated their result against fifth-seeded Bowdoin from earlier in the season with a 7-2 win. Wrapping up the list of Walker Division victors was Tufts, who handled the challenge from 6-seed William Smith, also by the 7-2 scoreline.

Epps Division:
The Epps Division produced the first upset of the tournament, and it came from a team that has a bright future in the CSA. 6-seed Georgetown, who has plans to moved to varsity status this fall, came into their match with third seeded Mount Holyoke as the highest ranked club team and with something to prove. They succeeded in making their point with an emphatic 8-1 victory and a trip to the semi-finals, where they will face the second seed, St. Lawrence.

Once again, the close seeding proved true in the 4-versus-5 match-up with another 5-4 scoreline, this time with the higher seed Colby taking down fifth seed Haverford. The match was knotted at 4-4 with the third position players on court, and it was Colby’s Sabrina Teope who prevailed in the fifth game. Colby now moves on to a rematch with top-seeded Connecticut College, who cruised past Bucknell 9-0.

E Division:
In the 11-team E Division Draw, teams seeded sixth through 11th faced off in preliminary rounds of play on Friday evening. As one might expect, the closest match of the final session featured the eighth and ninth seeds, Fordham and Bard. These two teams played to a close 5-4 match during the season, and the result was repeated later on with Fordham again emerging victorious. The match was decided in the last 30 seconds of play, with Bard tying the match at 4 wins apiece immediately followed by Fordham clinching the victory on a neighboring court. Washington University in St. Louis and Colgate were the other two teams to move on to this morning’s quarter-finals.