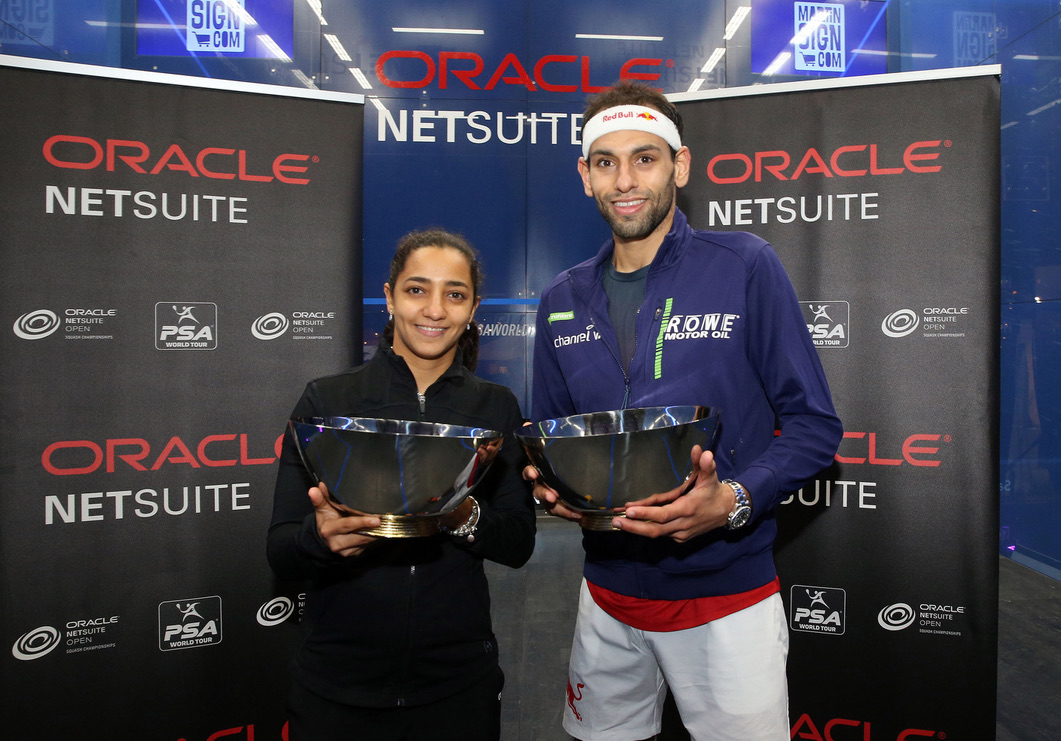 World No.2 Mohamed ElShorbagy lifted the Oracle NetSuite Open trophy for a second time, after he got the better of World No.3 Tarek Momen in a deciding fifth game at Embarcadero Plaza in San Francisco.

The pair were meeting for the 21st time on the PSA World Tour, and it was Momen who got the better start, but ‘The Beast’ was able to fight back quickly to gain the momentum in the first game, taking it 11-6 in just nine minutes.

The tournament’s No.1 seed also had an advantage in the second game at 6-3, but ‘The Viper’ won seven of the next eight points to sit pretty at 10-7. However, ElShorbagy was able to save all three game balls to push it into a tie-break. 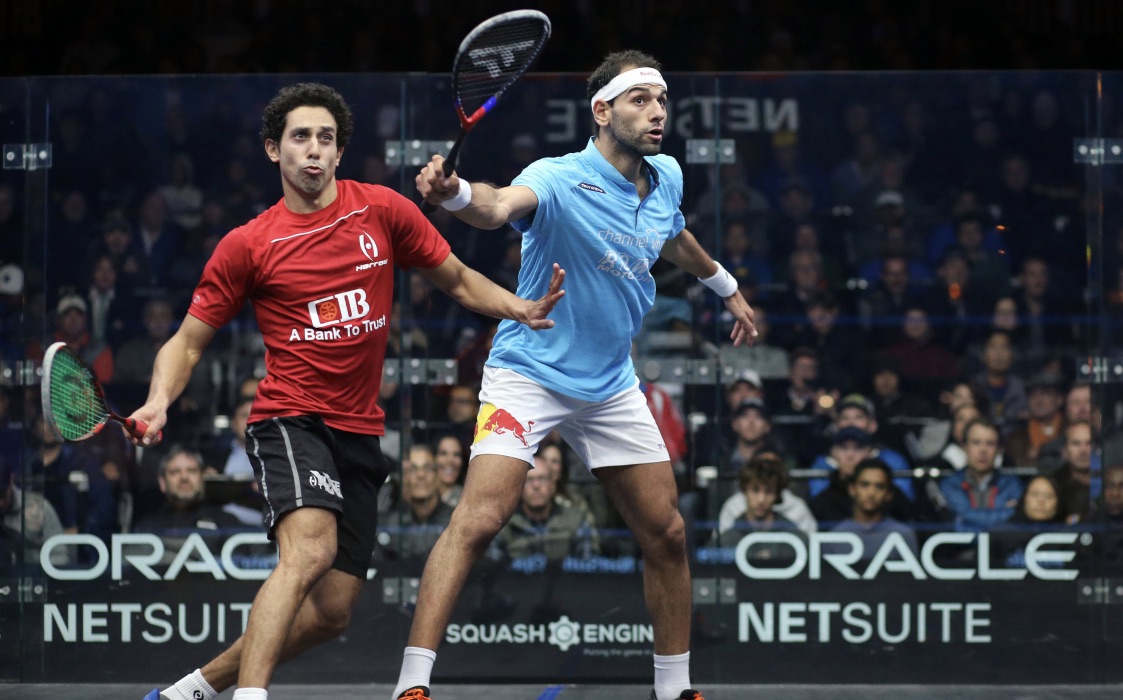 ‘The Beast’ then saved another game ball, but Momen would eventually get over the line to win it 13-11 to tie the match. The third game was a reverse of the second, with the World No.3 having to save several game balls. ElShorbagy, though, was able to take it over the line 11-9 to go 2-1 up in the match.

Momen had control throughout the fourth game, in his quest to send it into a decider. He won it 11-7, but he was unable to keep his levels of performance up in the final game, as ElShorbagy proved too much. He powered home 11-4 to win the match in 70 minutes and claim his second Oracle NetSuite Open title following his 2017 victory.

ElShorbagy said: “The way Tarek has been playing, the consistency he has had is unbelievable. I think the way the match went. It was cat-and-mouse. We both kept doing different things and luckily I won the first game so I had the advantage.

“Matches like this, when they go to a fifth, anything can happen. Whoever has the better start in the fifth usually pulls through. Luckily, I had that better start today.

“We are going to play a lot this season and hopefully we will see more amazing matches for the fans to enjoy.” 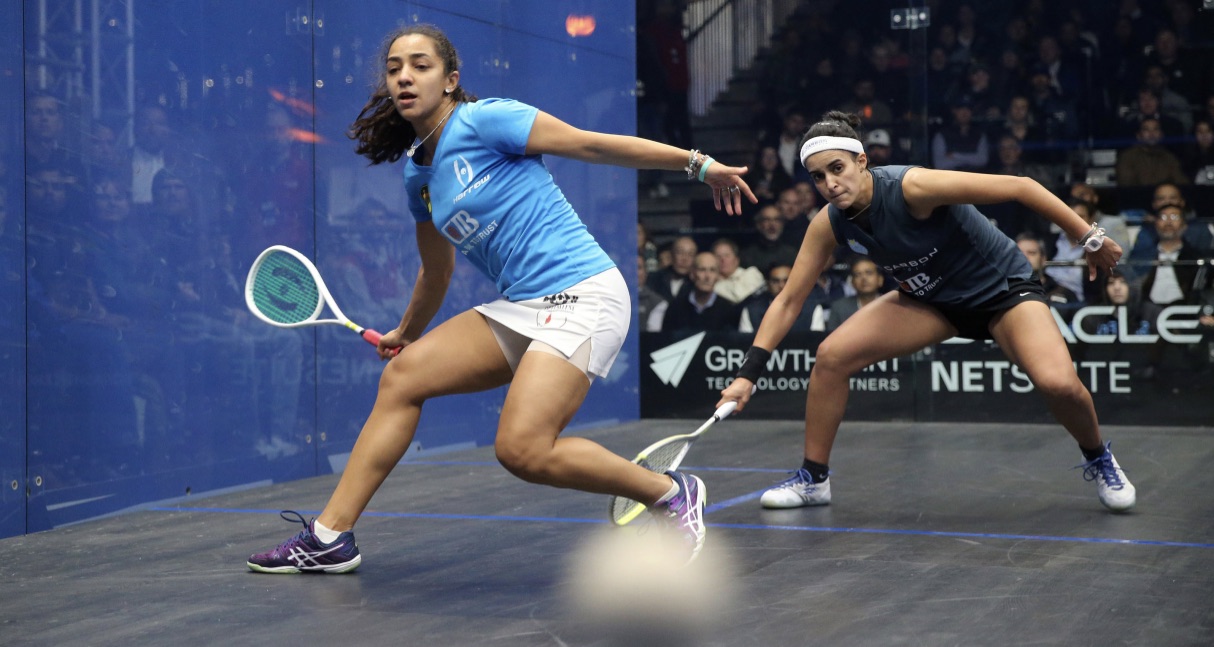 She needed just 23 minutes to complete the victory, her 13th over El Tayeb on the PSA World Tour, although the World No.5 did seem to be carrying some sort of shoulder issue throughout the match.

The first game was tight in the opening exchanges, but El Welily was able to find her game in the cold conditions in San Francisco to reel off six straight points to take the first 11-6.

She then started the second in the same imperious form, but the ‘Black Widow’ was able to fight her way back into it. However, the World No.1 reeled off a string of points again, five this time, to take the second game by the same scoreline.

The third game went much the same as the first, with a tight start to it before El Welily was able to power on to victory. She completed a hat-trick of 11-5 game wins to take the 3-0 victory, clinching the Oracle NetSuite Open title for the first time.

“The best rally of the match by far!”@RaneemElWelily and @NourElTayeb are putting on a show of fitness and retrieval here in San Francisco! 👏#squash @ONOSquash pic.twitter.com/yxhl8e0QxM

In winning the title, the World No.1 took revenge for losing in the final in San Francisco last year, and also on El Tayeb after missing out on the China Open title earlier this month, but the new champion did not think about that prior to this clash.

“I definitely felt good out there today! I just was trying to play all the way to the end and not to give any loose shots or give any cheap points. I wanted to try as hard as I could and I think that was what kept me going through to the end,” El Welily explained.

“Nour is a great shot maker and I know she goes for shots anytime. Whenever you give her a loose shot, she just kills it straight away so knowing that, I could not be relaxed on court. You are always on your toes to try and get up as far as possible, before moving quickly back to retrieve whatever she does next.

“Whenever I think about the word revenge, it does not do me good. I try to keep that out of my mind and keep calm. I try to just play, no matter what happened in the past. I try not to think about it too much because it never brings any good. Especially me, I tend to overthink too much anyway!

“We are all trying to do our best every tournament. Everyone is fighting out there, and I am just glad to be a winner out there today, and maybe she will be next time.”

The PSA World Tour moves across the United States to Philadelphia for the US Open, which takes place from October 5-12.