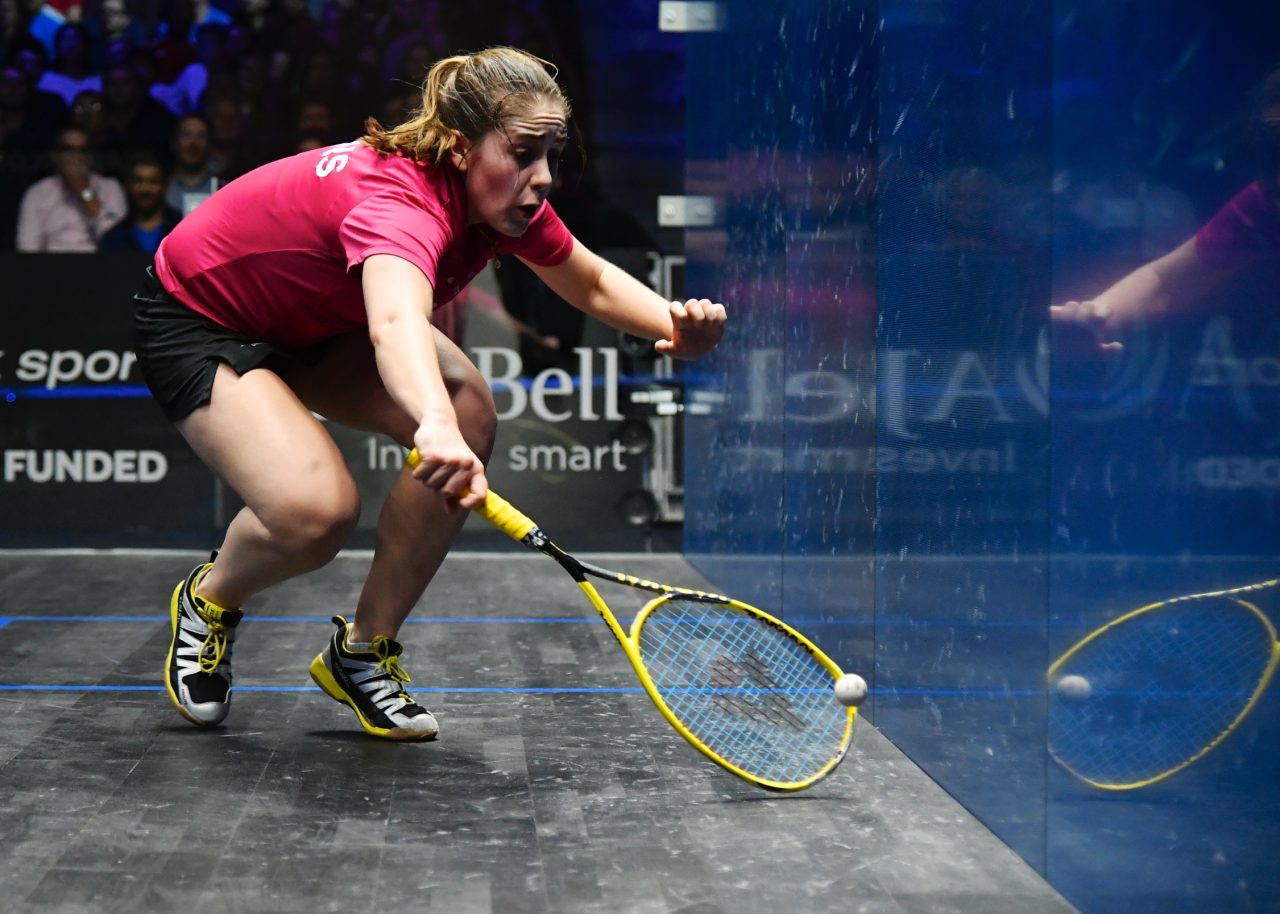 Tesni Evans in action at the World Championships in Manchester      Pic: PATRICK LAUSON

Tesni Evans is already the highest-ranked female player from Wales in history, having reached a career-high position of 12 in the PSA World Tour list.

Her gutsy approach to this immensely challenging sport, and her readiness to accept all the physical demands that go with it, either in matches or in training, are part of what make her such a formidable opponent. However, she is also adding quality to her technique and tactics with a game plan that could soon take her into the world top ten.

In December she achieved the best performance of her career, beating Laura Massaro to reach the quarter-finals of the AJ Bell World Championships.

Becoming the first Welsh woman ever to reach the quarter-finals of the sport’s premier event was a major achievement in itself. Doing so on Massaro’s home turf made it even more significant, especially so with a titanic fourth game that Evans edged 13-11 to complete victory in 77 minutes.

This year promises to be a big one for Tesni as she mixes her own personal targets on the World Tour with a desire to win medals for Wales in the Commonwealth Games in Gold Coast in April.

As she approaches the Tournament of Champions, and a tricky first round tie with Egypt’s Hania El Hammamy, Squash Mad caught up with the Rhyl Rocket to talk about her game and the work she is doing to keep improving.

I couldn’t be happier after a win like that, against someone of Laura’s calibre. I thought it was a very good match. It was a very tough match, as it always is playing Laura. You know you have to work that extra bit harder not just physically but also mentally.

So happy to have won, and happy with the way I played, but also how I stuck in there towards the end to finally get the win as it was proving hard with Laura coming back at me during the third and fourth games. It was a case of just blocking out all the thoughts that are going through your head at the time about almost reaching the finish line. 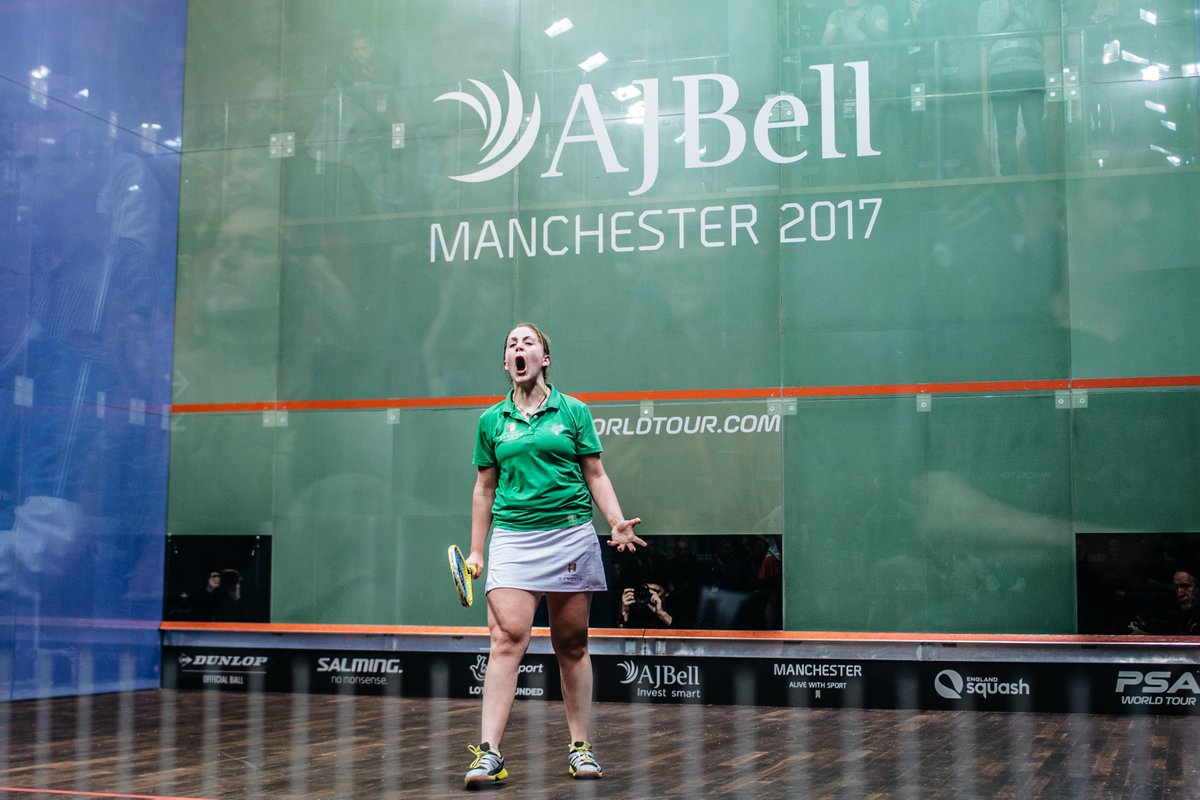 Moment of victory for Tesni against Laura Massaro

Build-up to the Worlds

Yeah, I put in some good work leading into the Worlds. It was really nice to have a tournament so close to home, only being an hour away. That makes it so much easier, taking out the tiredness of the travelling and jet lag and everything that goes with being somewhere further away.

That makes you feel like you have more time, and you are able to stay in one place and train for more time and obviously it’s all so familiar. But I dont think it was just the work I put in for this event, it has been a gradual build-up from the work put in the summer and the past training blocks.

I took a lot out of the match against Laura in Hong Kong (winning the first game but losing 3-1). After taking the first game I felt like I fell away almost and wasn’t happy with a few things. So it was good to go away and learn from my mistakes and try to change that before playing Laura again in Manchester. You don’t always get the chance to do it so soon, so I guess it was quite fresh in the mind.

Things to take away from the week in Manchester

I can take so many positives away from my week in Manchester. It has given me a lot more belief and makes me excited to move forward now. And all the things I did well in Manchester, I want to keep it going for the rest of the season, and to keep working hard at things that I still need to improve on.

It makes me happy to just know that what I have been doing has been paying off. I have just gained a bit more experience as well, which will also be good to take forward and build on.

Working with David Evans (British Open champion in 2000) has had a big impact for me, not just the work he has done in Cardiff but also having him travel to tournaments now has also given me a massive boost. He brings so much knowledge to the table, as does my dad, Andrew Evans.

They have both put some really hard work into me and for that I can’t thank them enough for all the work they have done for me and the input they have had. I really enjoy working with them so much. It’s great to have both of them helping me.

With Dave being based in Cardiff, going down there and working with him and some of the other Welsh players, and then when I am home and up in North Wales I have my dad here to work with me which I love, so it works perfectly!

My targets for this year would be to just keep improving and enjoying my squash. If I were to set some goals I would probably say to break the top 10 in the world rankings, but I know how hard that is going to be, so I’ll just  keep working and see where it takes me.

Pictures by PATRICK LAUSON and PSA