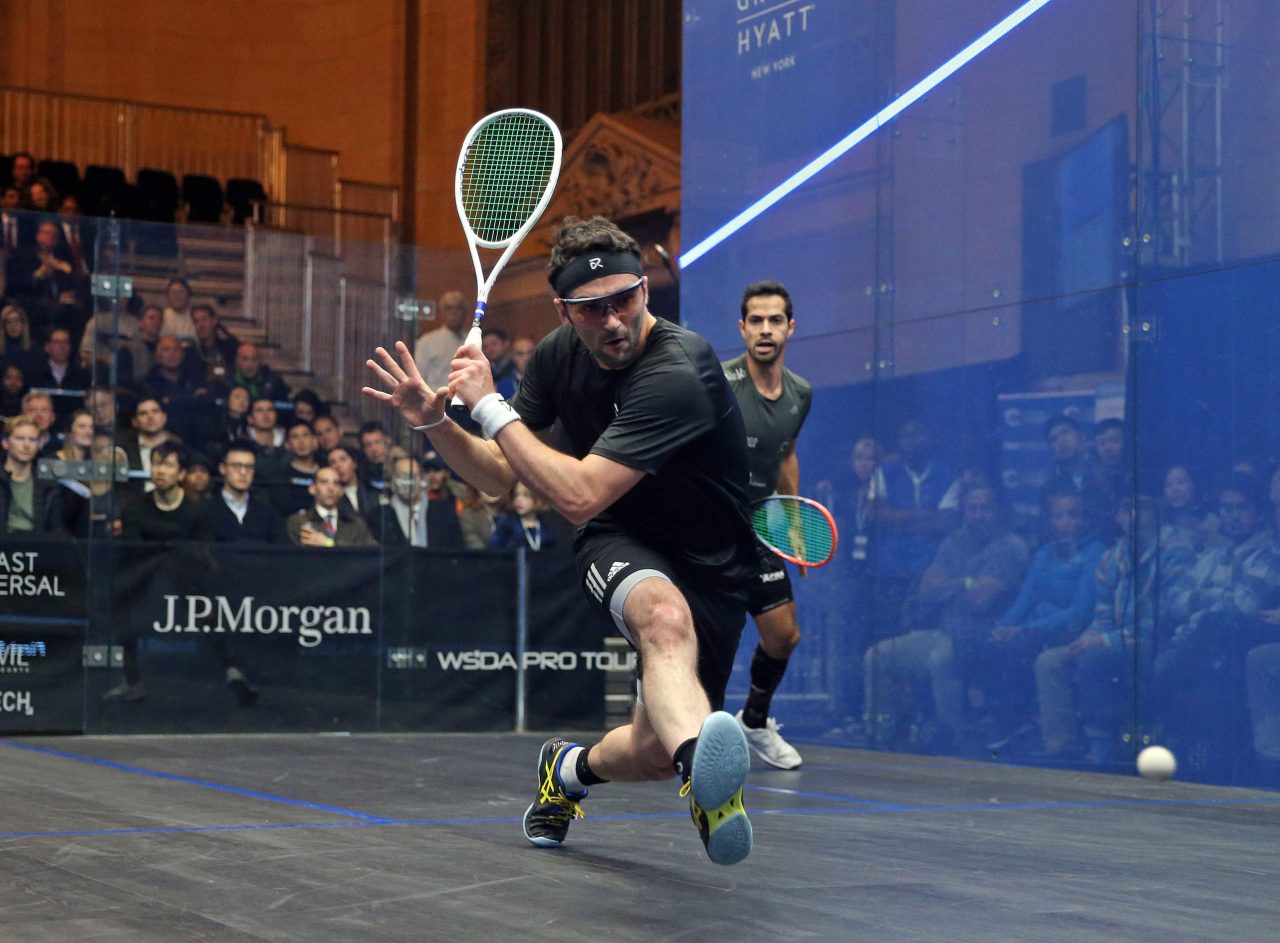 Chris Hanson wears the RIA Eyeguard on court during the recent Tournament of Champions in New York. The orange lens is designed to help professionals cope with the intense lighting and reflections on glass courts

American number two Chris Hanson has done much more than simply join the current debate about eye safety in squash.

He already has a large number of top pros testing the prototype eyewear and offering feedback. Daryl Selby, who pledged to wear eye guards every time he steps on court after being struck in the eye for the first time in his career during the British National Championships, will be the latest pro to test RIA Eyewear at the Troilus Cup in Canada this weekend.

Selby will also be sporting eye protection when he plays Joel Makin at Canary Wharf in just over a fortnight’s time.

Hanson wore an RIA prototype lens in a high-profile, competitive situation when he took part in the recent Tournament of Champions in New York. He said: “We built the orange lens that I was wearing to cut down on intense lighting conditions – i.e. glass courts – so it helped me a lot to track the ball, especially up in the lights.

“We wanted to create a product that feels like it disappears on your face when you put it on and doesn’t distract from your play, which I certainly felt it succeeded in doing.

“The other players have known for a while that I have started a company and wear my own product, but it definitely still proves hard to have any conversations about them wearing any eye protection outside of the rare occasion that they compete in doubles squash.”

Hanson added: “From my point of view, eye protection has become a ‘necessary evil’ in the squash world – something that juniors, college players, and adult amateurs have to wear but don’t necessarily want to.

“It’s safe to say that almost 100% of professional players stop wearing protective eyewear the minute they turn pro since they don’t have to any more.

“The problem with the current situation, though, is that it really only takes one freak accident to have a catastrophic eye injury, regardless of your playing level.

“Jordan and I started our own company, RIA Eyewear, because we believe that safety and high performance can coexist when it comes to eye protection for squash and other racquet sports. 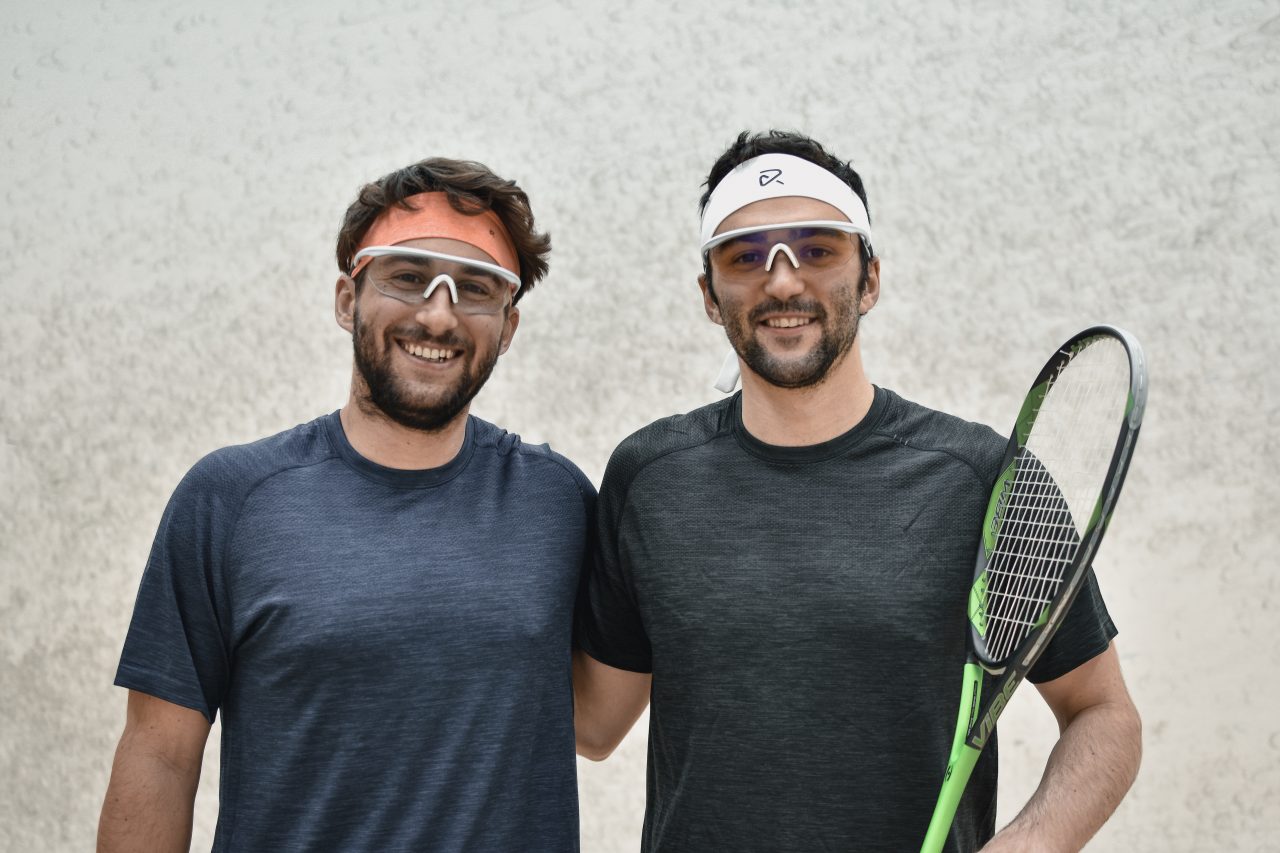 “We want people to invest in their performance at the same time that they are protecting one of their most important assets, and stop choosing between the two options.

“We are still in prototyping and testing with pros at the moment, so the product is not available on the market yet. We did a two-year R&D dive with the renowned lens-maker ZEISS in Italy to create lenses specifically for the squash environment (i.e. to push the fold on anti-fog, contrast tints, and clear optics).

“We are planning for a late 2020 launch for squash and our first line will be in the premium price range. We are putting all the best inputs possible into our design and envision this as an investment in performance and safety over a long period of time (not just a pair you chuck in the bag).

“Our testers to-date have been Miguel Rodriguez, Ryan Cuskelly, Chris Binnie, Zac Alexander and all of the Team USA players, as well as juniors and college players.

“We have made inroads in the club/college markets here in the U.S. and we are looking closely at gaining exposure in the near future to the UK/European arena.”

Jordan Kemp is Hanson’s business partner. Jordan’s father is from Colchester, not far from the Selby family’s Off The Wall squash headquarters.

Hanson added: “Jordan played tennis for Trinity College when the team was coached by Paul Assaiante, so he is intimately familiar with the squash world.”