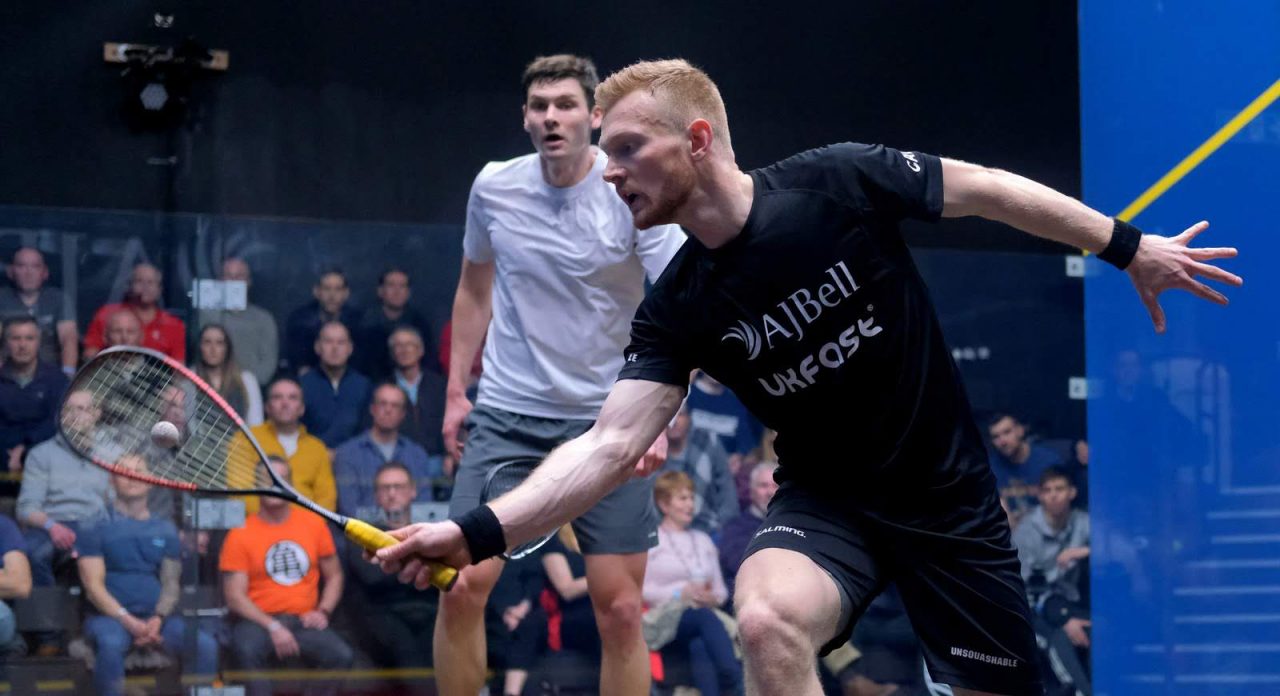 Makin made his first final with a 3-1 defeat of 3/4 seed Adrian Waller (11-7, 10-12, 11-7, 11-2) while 5/8 seed Jasmine Hutton advanced without hitting a shot for the second consecutive day after Emily Whitlock withdrew following a foot injury.

Willstrop went on a five-point run at 6-6 in the first game then finished off the second with three unanswered points as his 23-year-old opponent let the crowd know his frustrations.

Parker closed out the third having trailed 7-5 but couldn’t capitalise on a fast start to the fourth as the guile of Willstrop took the 36-year-old into an 11th Nationals final.

“He’s an immense athlete and I enjoyed the match with him today. I love playing in big matches, I’m addicted to the buzz of these matches,” said the former World No.1 after increasing his winning record over Parker to 4-0.

”George was very good. He’s a class player and he kept his head and cool today. He played great squash and we had a great match. I’ve known that for a long time and I knew how good he was so that’s why I gave him respect and needed to play very well to beat him. It was anything but easy.

“I hope to put on a good match tomorrow. Joel will be tough to beat at this tournament no question. He’s the form player that’s here,” added the three-time champion, who lost to Makin at the Tournament of Champions last month.

Despite a 3-1 losing record against Waller, Welshman Makin made a rapid start, and a change of strings at 9-7 in front, had no effect on the top seed’s masterful play as he promptly won a thrilling point then closed out the first game 11-7.

A good-natured affair turned tighter and more tense in the second, Waller expertly saving a game ball then pulling through with some exquisite finishes.

Yet it wasn’t to be a first final for Waller as World No.11 Makin cruised home in the third and fourth games.

“James has got through the draw unbelievably well and he’s so accurate as everyone knows. He knows how to win these tournaments and I’m excited to see how I can get on against him,” said Makin, who will try to become the first Welsh male winner against Willstrop. “It’d be the biggest title I’ve won so far.”

Earlier in the day, Perry built first-game leads of 4-1 and 8-3 before eventually taking it but first-time semi-finalist Tomlinson levelled.

Perry’s anger sparked her into life in the third as she stormed to an 8-1 lead yet the unfancied Tomlinson upped the ante in the fourth to set up a decider.

A more measured and cautious fifth game followed and, locked at five-all, Perry’s fortuitous winner off her frame helped the 29-year-old grab a timely advantage to gain three match balls, a classy winner on her second enough for the victory and a third final berth.

“I was really pleased to stay strong at the end of the fifth. I’ve been there lots of times but even at the end Millie was playing some amazing shots,” said Perry.

Perry extended her head-to-head record against Tomlinson to 11-0 with the win, having previously beaten her Derbyshire opponent at the 2015 Nationals when she went on to claim her sole British title.

“I hope I can raise my level a bit in the final. I’ve had extra build up because I didn’t get to play last year because I was still injured so I haven’t played it for a couple of years.

“You want to look back on your career and be able to say ‘I won a few National titles’. I’ve been stuck on one for quite a few years now so I’ll be gunning for whoever I’ve got to play.”

Women’s 5/8 duo Whitlock and Hutton were deprived of a first meeting after the former went to hospital for an x-ray on her foot, handing the 20-year-old Hutton another walkover victory after second seed Alison Waters withdrew yesterday.