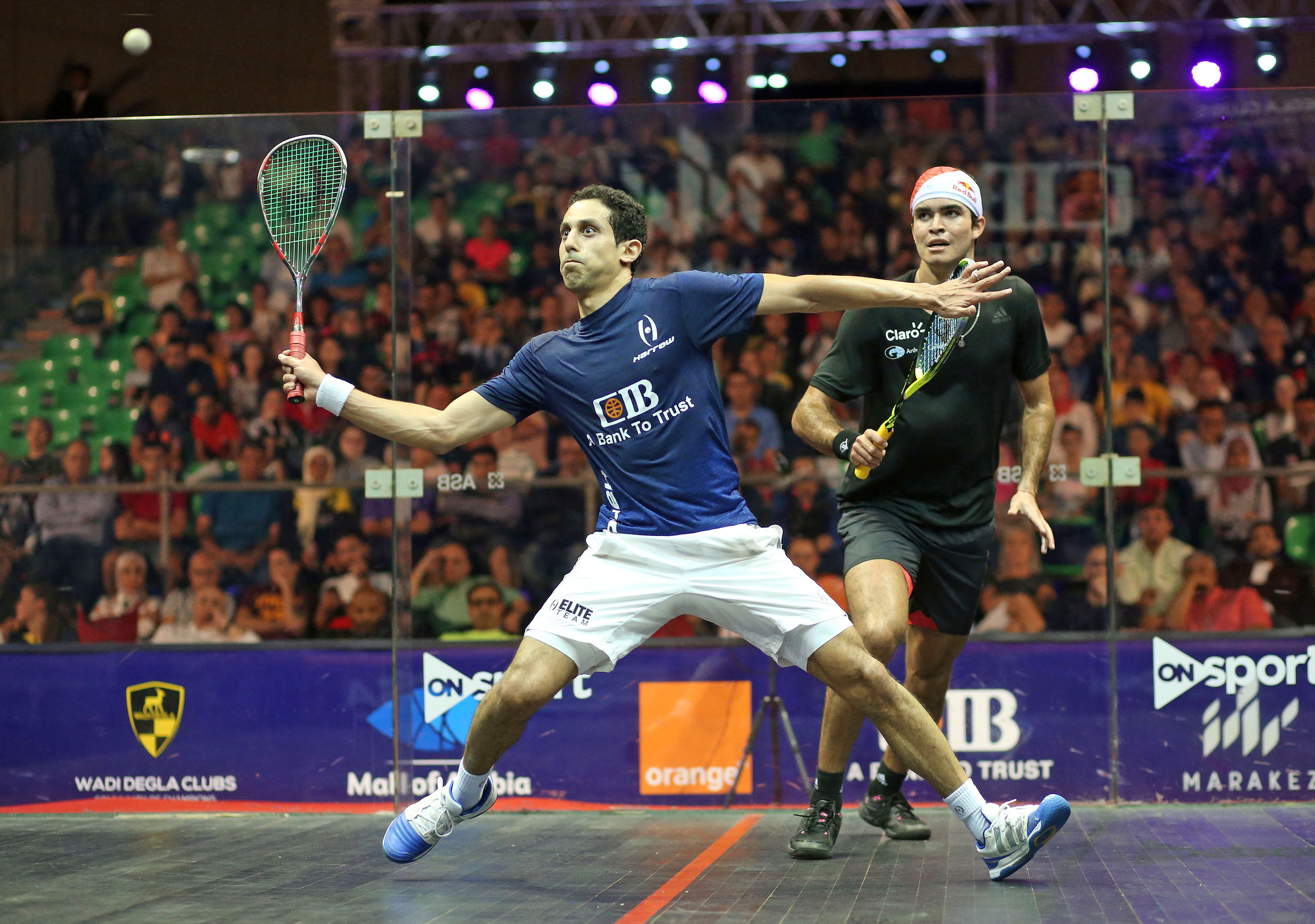 Men’s World No.1 Ali Farag and defending women’s champion Nour El Sherbini saw their title challenges at the 2018-2019 CIB PSA World Tour Finals come to an end as group stage action drew to a close on day four of the season-ending spectacular at Cairo’s Mall of Arabia.

The first four days of the tournament have been held using a round-robin, best-of-three games format in the qualifying group stages, and Farag bowed out despite a 2-1 victory over New Zealand’s Paul Coll. His compatriot, Mohamed Abouelghar, defeated World No.4 Karim Abdel Gawad 2-0 to ensure that both him and Gawad qualify for the semi-finals with eight points, one more than last year’s runner-up Farag.

Egypt provide all four of the men’s semi-finalists, with Camille Serme of France preventing a scene of total domination by the home nation by booking her place in the women’s semis.

Abouelghar controlled his match against an off-the-pace Gawad, who had already qualified before stepping foot on court, winning 11-9, 11-3 to finish top of Group A and mark his World Tour Finals debut with a semi-finals spot.

“I was watching Ali’s match with Paul Coll,” said Abouelghar. “We were both joking about it, but I didn’t know the calculations before. I had it in my mind, like the Liverpool (Football Club) scenario (when they came back from a 3-0 defeat in the first leg to beat Barcelona), that anything can happen in sport and if I have the right attitude, then I can pull anything through, and I’m happy I did.

“I think the motivation for both of us was different. I came here to give myself one more chance and he was already qualified, so I think the motivation was different. I was happy I took advantage of that and I’m so happy to be in the semis. I’ve never had a good win in Egypt, so to have it now and on a big stage like this then I hope it doesn’t stop here and keeps going.” 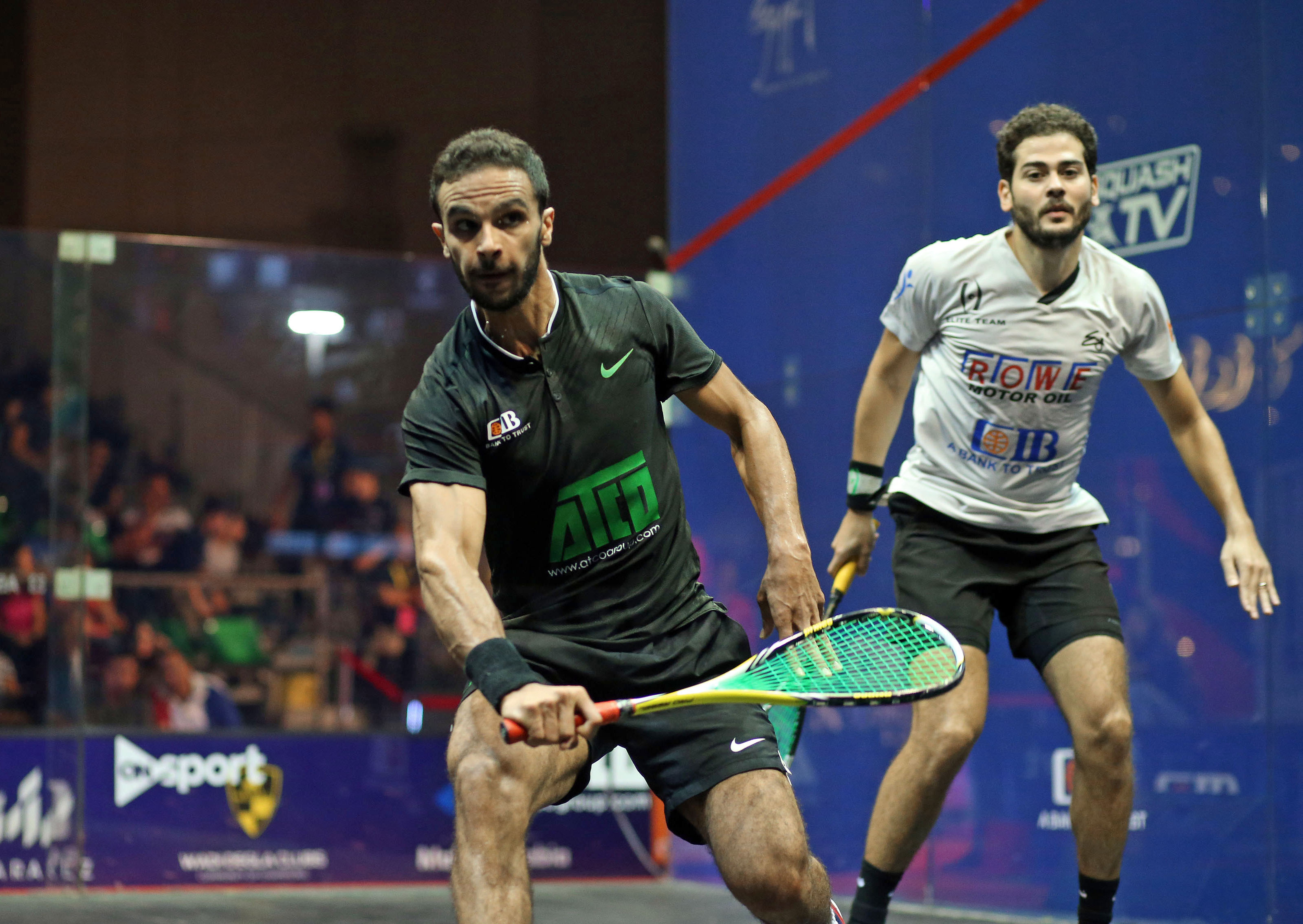 World No.3 Tarek Momen was the other man to earn his spot in the semi-finals after he dispatched Peru’s Diego Elias. Momen, the 31-year-old from Cairo, dominated his opponent in the opening game and recovered from a second game blip to win 11-2, 4-11, 11-8 in 46 minutes, booking a spot in the last four of this tournament for the first time.

He finishes second in Group B behind defending champion Mohamed ElShorbagy, who maintained his 100 per cent record with a comfortable win against Germany’s Simon Rösner yesterday (June 11).

Momen said: “I was really happy I remained calm, I kept talking positively to myself, I kept telling myself to forget about the lead and the physical advantage, forget about everything, it’s just two points so [I had to] fight for them and get the win.

“I’m happy with that and how I recovered after playing a perfect first game. Then I kind of played too much to the front and he capitalised on that. I saw the momentum shift, and I’m very happy I was able to get the win eventually.” 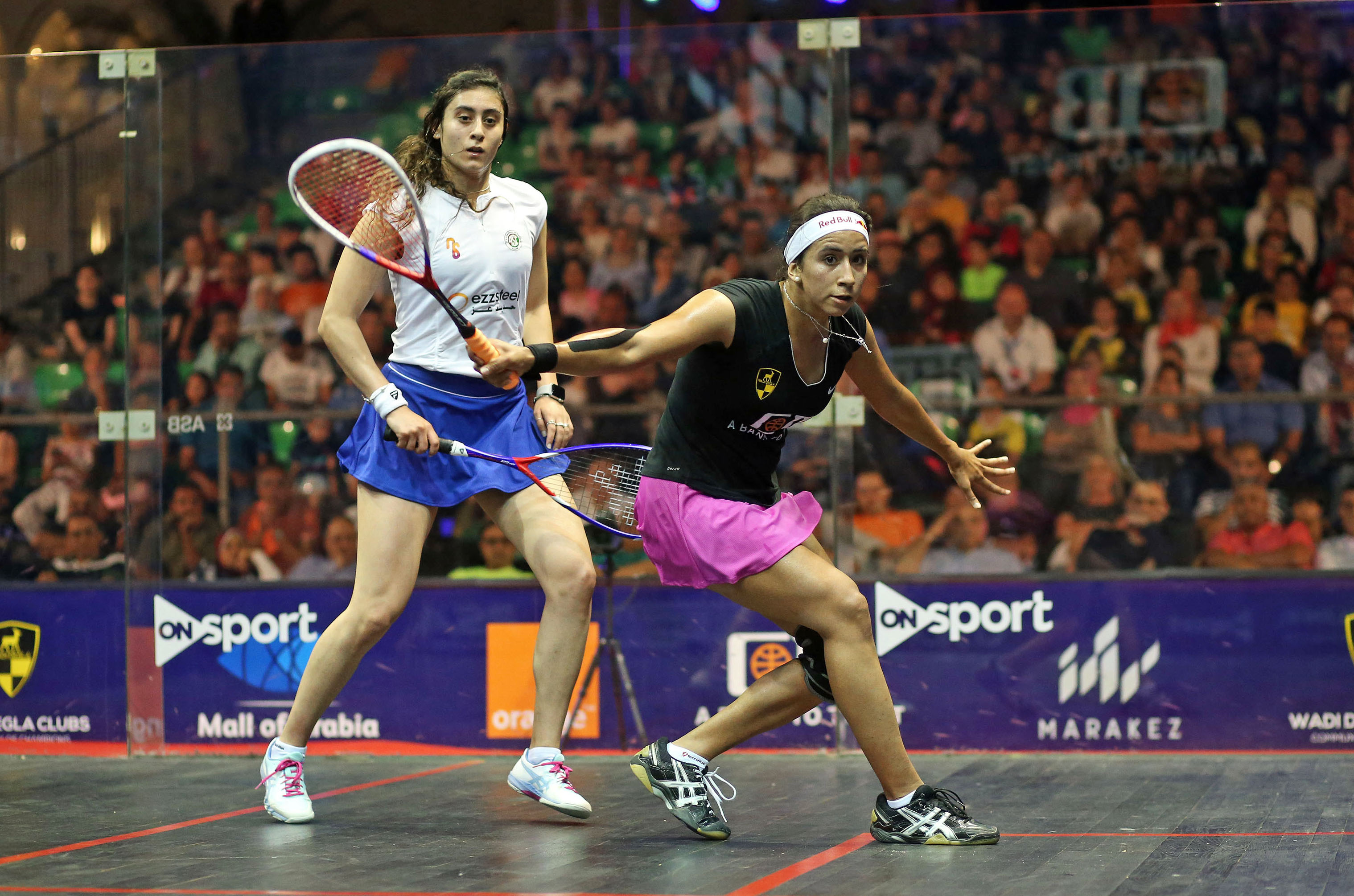 In the women’s event, British Open champion Nouran Gohar continued her superb form to send El Sherbini to a shock group stage exit, recovering from a game down to win 6-11, 11-5, 11-7 and secure top spot in Group B.

The pair come from different parts of Egypt – Gohar from Cairo and El Sherbini from Alexandria – and it was the former, playing in her home city, who established her hard-hitting style on the match to ensure she will face France’s Camille Serme in the semi-finals, which will be a repeat of the British Open final.

“I have so much respect for Nour, and the way she is playing recently is unbelievable,” said 21-year-old Gohar.

“I think there is [a slight rivalry between the different cities in Egypt], especially the club where Nour comes from as it is a big club and has had very good juniors in the past such as ElShorbagy and Nour and they have a really tough game to play against. There is always a rivalry between Cairo and Alexandria, and this competitive thing, I think it’s the main reason we are good at squash in Egypt.” 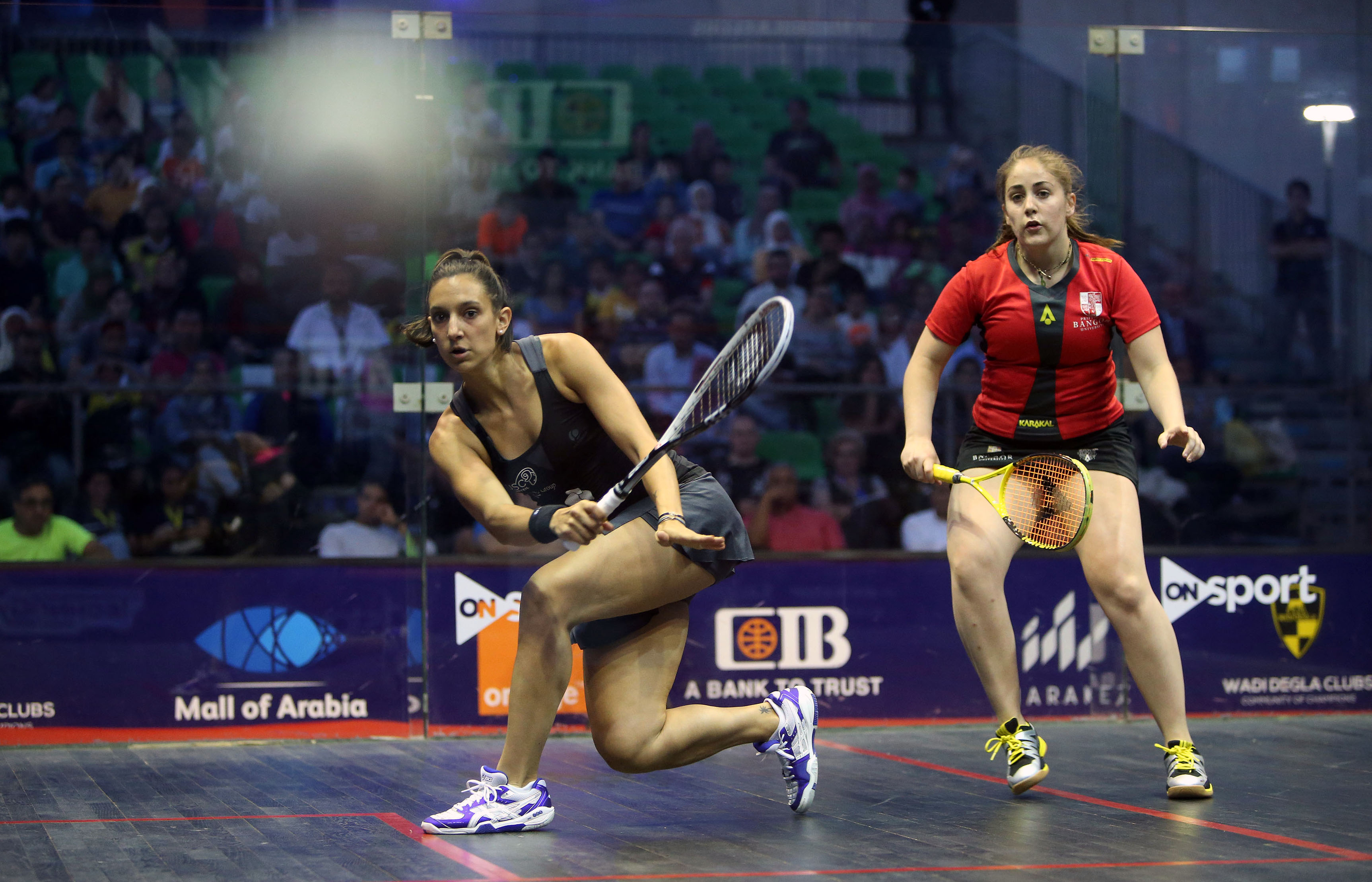 “From the beginning, I saw that Tesni was not moving as well as usual,” said 30-year-old Serme.

“But she is such a fighter and whatever happened I knew she was going to give it her all in the second. She tried to find some good solutions and it almost worked, it was a good tactic, but I’m happy that I found my solutions in the end. Every match is tough and everyone deserves to be in the semis, but I feel lucky that it’s me and I’m looking forward to tomorrow.”

The semi-finals will continue with the best-of-three games format, before the final reverts to the traditional best of five scoring. The semi-final fixtures begin at 19:00 (GMT+2) on June 13, with live action broadcast on SQUASHTV (rest of world), Eurosport Player (Europe only) and the official Facebook page of the PSA World Tour. 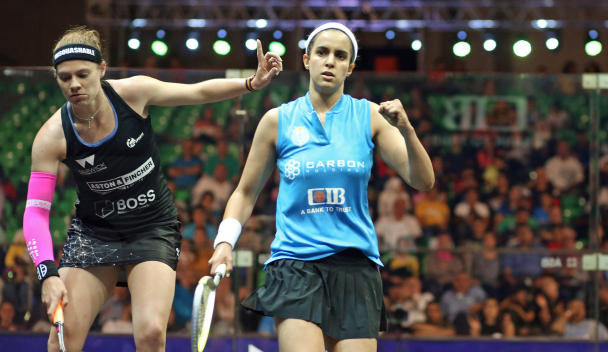 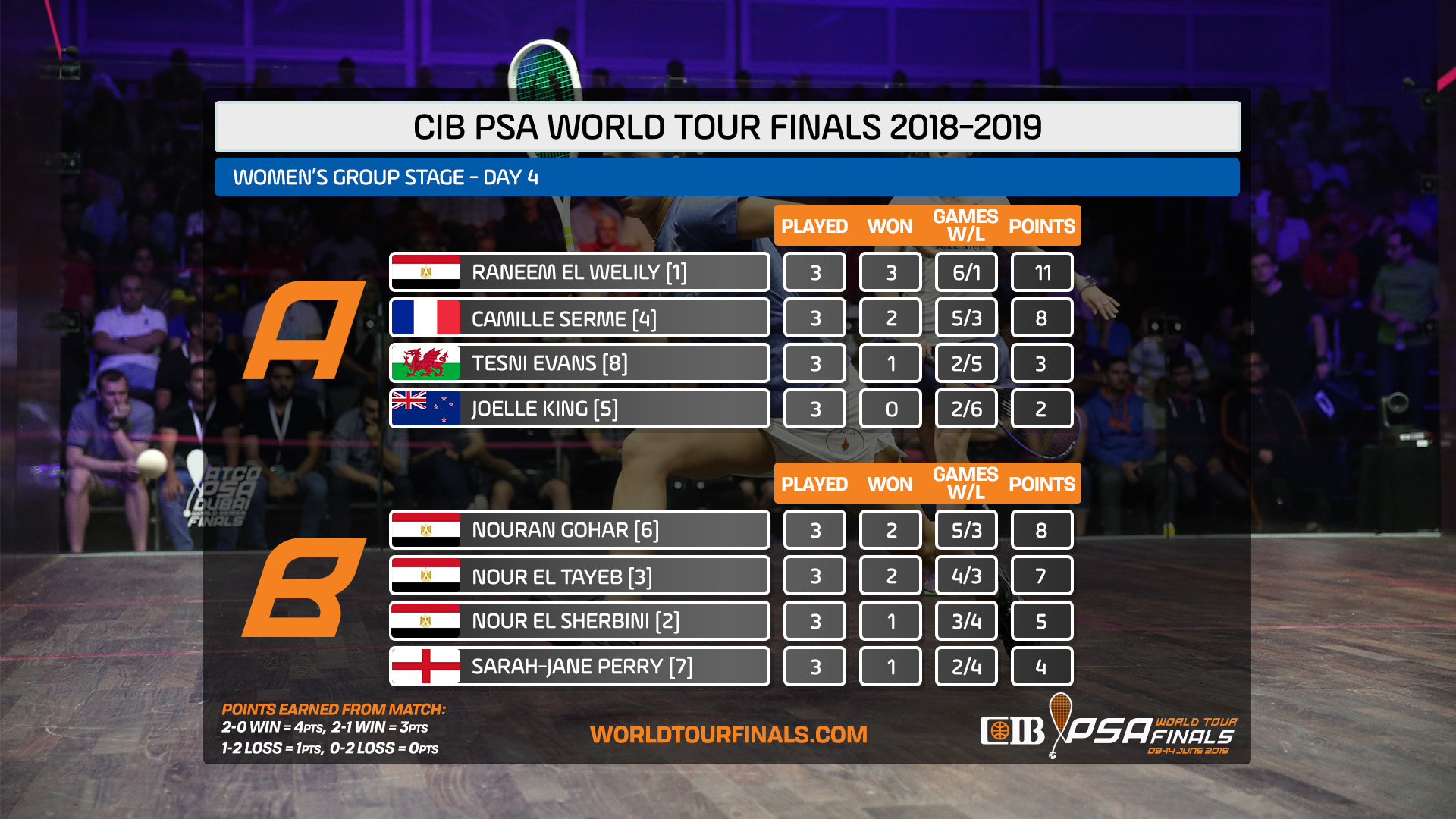 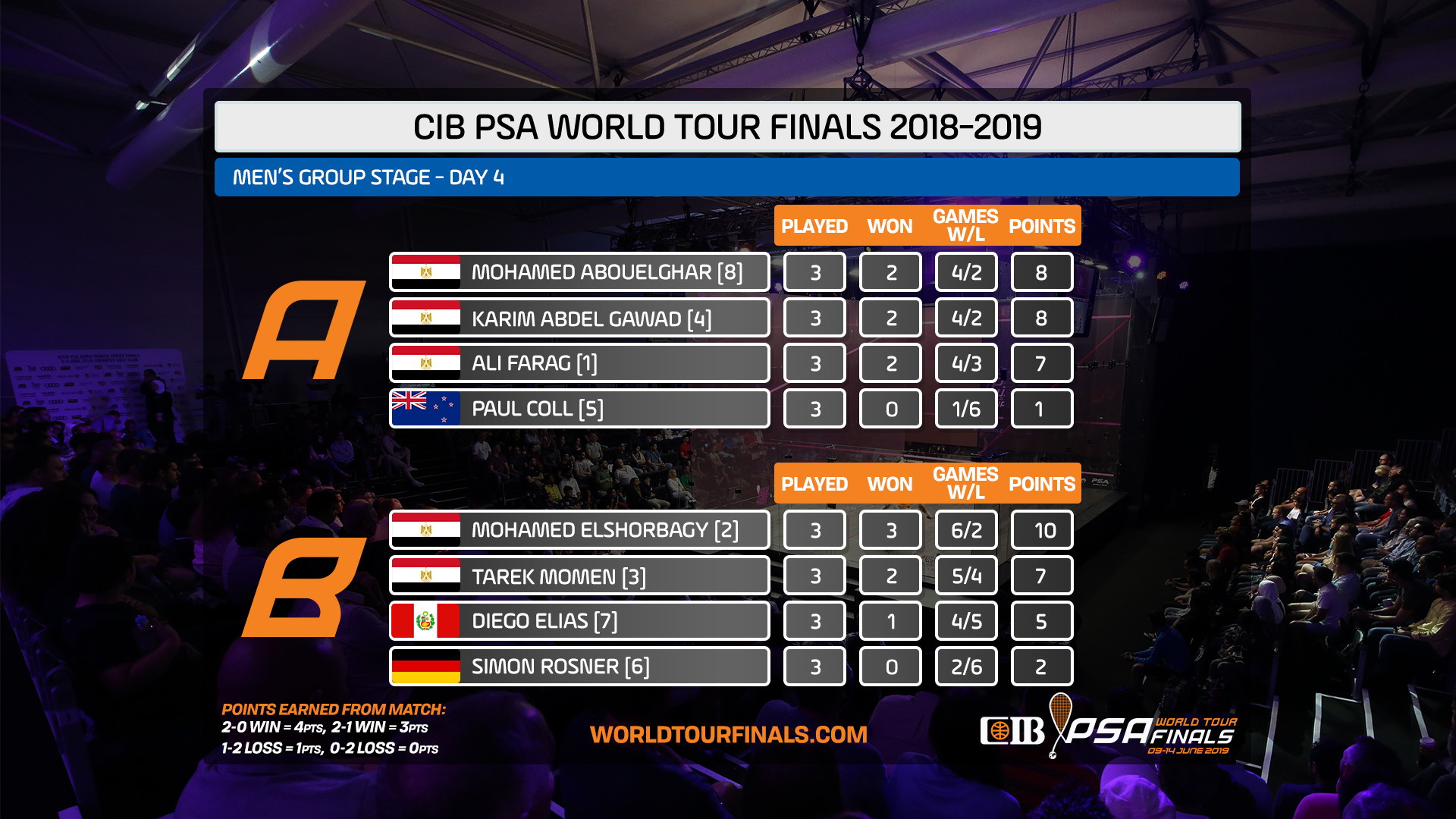