Alan Thatcher October 5, 2013 No Comments on World Squash Day rocking all over the globe 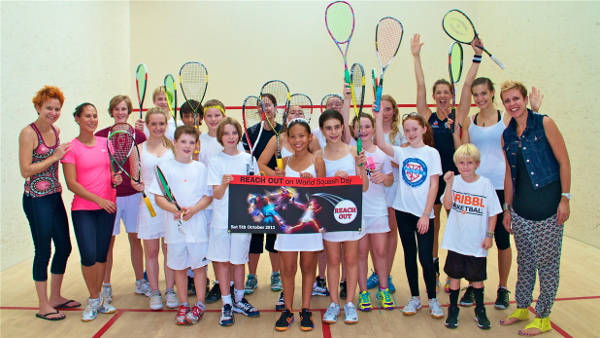 Top pros line up with juniors at Heights Casino in Brooklyn, New York

World Squash Day provided the ideal platform for staging events to promote the sport across the whole planet.

The PSA led the way with a novel collection of tournament highlights from PSALive productions.

Viewers were encouraged to share some spectacular footage with non-squash playing friends to show the incredible athleticism on show and the high level of entertainment in major tournaments.

Semi-finals action at the WSA Carol Weymuller coincided with a WSD  at the Heights Casino in Brooklyn. Head coach Linda Elriani said: “It’s quite a coincidence that we have most of the best players in the world playing on our courts on this special day.

“Before the semi-finals began we held a ‘Play a Pro’ event for our juniors so that they had a chance to get on court with some of the top women’s squash players. World #21 Sarah Kippax, World #43 Kylie Lindsay, World #73 Sarah Cardwell, World #32 Samantha Cornett, World #22 Aisling Blake, World #29 Samantha Teran, World #35Victoria Lust, World #25 Donna Urquhart and World #5 Joelle King all very kindly agreed to play with our two groups of juniors.

“The juniors all had such a fun time, trying their hardest to win a point or two off the pros! Thanks so much to the WSA players for taking part in this. We really appreciate it. They are all a huge credit to women’s squash as they are so prepared to give back to the tournaments and help spread the joy of playing squash.”

In Pakistan, WSD events were held across the country with support from legends Jansher Khan and Qamar Zaman. Key government and squash officials weighed in, hoping their efforts will spark a renaissance in the former squash powerhouse nation.

World Squash Day coincided with an amazing boost for the sport in Australia, where mining companies are building squash courts to keep their workers fit.

Now I know where the phrase “Digger” comes from …