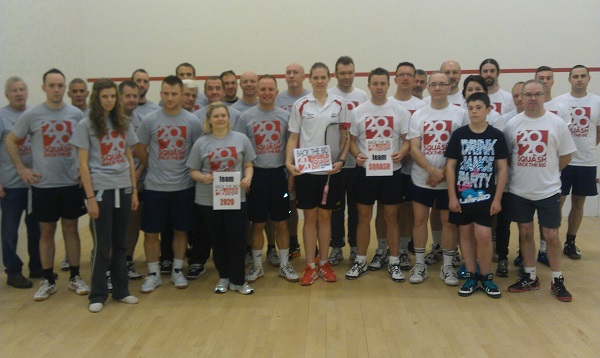 World Squash Day: Back The Bid 2020. Lichfield Squash Club and Burton Squash Club participated in the global team match, with the then World No 42 and current World No. 8 Sarah-Jane Perry (front and centre) in attendance.

The day before yesterday, 20th October 2018, a Facebook memory from 6 years ago appeared on my timeline. I am not normally one to share these, but this time I felt it appropriate as it represented a bit of a watershed moment in the development of my passion for the sport of squash.

20th October 2012 was World Squash Day and of course this was the year of the #BacktheBid2020 or #Vote4Squash campaign. It was all over social media that year, represented by those two hashtags, as squash made what seemed a credible pitch to the International Olympic Committee for the long-awaited Olympic recognition.

To my mind, this World Squash Day was the best ever and not just because it was my first experience of being involved with it. It seemed to galvanise and unite the squash community like no other initiative had managed before and there was a palpable sense of optimism that the IOC would actually sit up and take notice of this global groundswell of squash participation. Such a shame that this optimism was ultimately quashed.

The event itself was also ingenious – the World’s largest team match, with over 40,000 players being placed into 2 global teams, Team Squash v Team 2020, in 1 game shootout matches, a point being awarded to the winning team in each match.

Up to this point, I had been involved in promoting squash within my local community through setting up Lichfield Squash Club where I was living at the time. However, the enthusiasm shown by the global squash community during World Squash Day 2012, in addition to that of its founder, Alan Thatcher, are what inspired me to undertake more activities to promote squash on a much wider basis, the sport that I love and which I wanted others to discover and love as much. 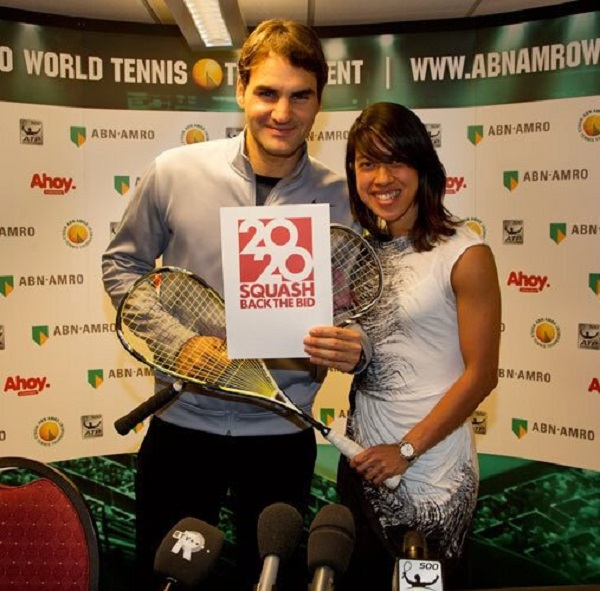 World Squash Day’s Back the Bid 2020 Campaign received some notable endorsement, including Roger Federer, seen here alongside the then World No. 1 woman player Nicol David.

Ever since, World Squash Day has become an annual focal point in my efforts to promote squash and I have always been part of organising an event, trying to be different each time. Subsequent years have included events such as a racketlon type challenge with the local tennis club in Lichfield, a ‘7 Clubs Challenge’ with 7 matches played in 7 clubs in 7 hours, a knockout tournament involving clubs across Staffordshire and an Open Day for adult and junior players. 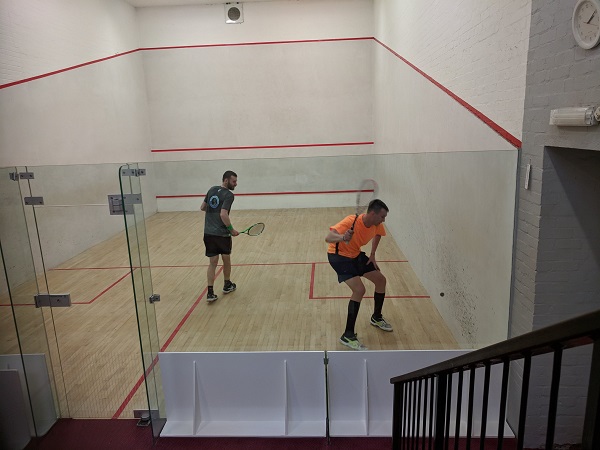 This year was no different and now living in Corby, Northants, which has the dubious title of the largest town in the UK with no squash courts, we held a ‘Northants Squash Extravaganza’ to help highlight the Corby cause and build further momentum towards getting a new club built here. Two locally based PSA pro players, Phil Nightingale and Robert Dadds, came along to enable our players to put their squash skills to the ultimate test, as well as play an exhilarating exhibition match. Corby then took on Brackley Squash Club in a team match for the Corby Challenge Trophy, using an innovative ‘every point counts’ scoring format, which Brackley duly retained. 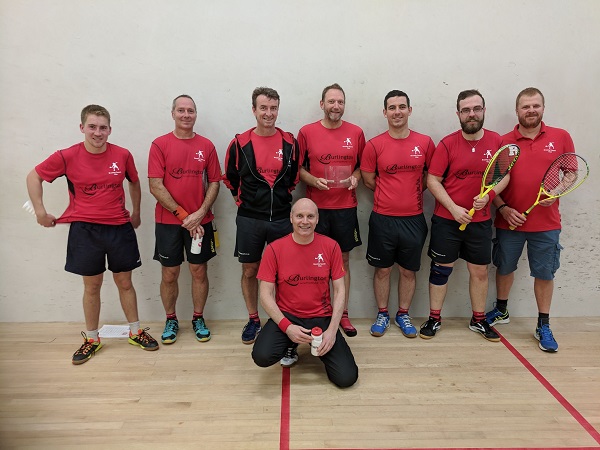 World Squash Day has also not just been about raising the profile of the sport, but also raising money for charity. The initiative officially teamed up with Unicef in 2015 and 2016, with a variety of fundraising initiatives and events raising over £18,000 to help disadvantaged children. 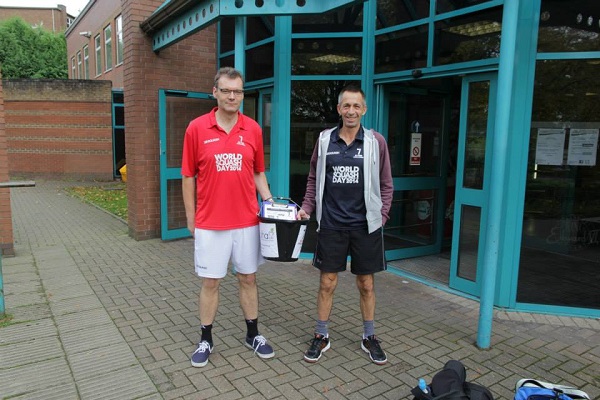 James Roberts (left) and his clubmate Mark Davey (right) outside King Edward VI Leisure Centre in Lichfield before the last of their 7 matches played in the 7 Clubs Challenge for World Squash Day 2014.

It has also afforded the opportunity for the squash community to raise money for more local or individual causes. Back when we did the 7 Clubs Challenge, we raised money for the Pulmonary Hypertension Association, this being a cause literally close to my heart, as my father had died of this debilitating and rare heart condition and by a cruel twist of fate, my mother now suffers from it too. 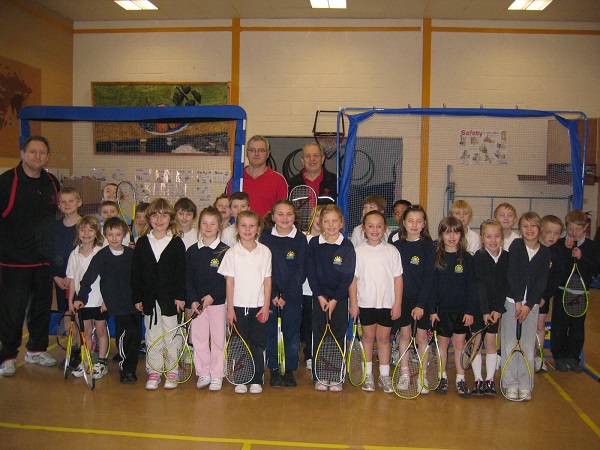 John Batty (back row, centre-right) has been fully committed to promoting squash in his local community in Tywyn, mid-Wales. Here he brought squash into local primary schools, using mobile walls.

This year, I have also been involved in raising funds for the chosen charity of a good squash friend, John Batty, who has dedicated his retirement years to passing on his enthusiasm for the game of squash in Tywyn, mid-Wales. He has in fact almost single-handedly kept the sport alive in what he affectionately refers to as the ‘graveyard of squash’. 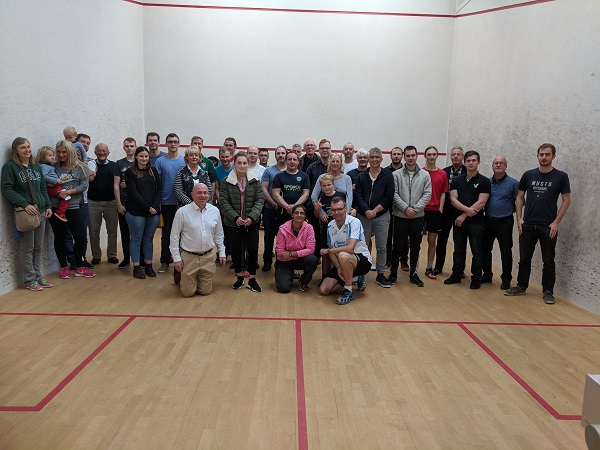 Participants and supporters at the recent John Batty Squash Tournament, held at Leicester Squash Club, which raised over £1,000 for John’s chosen charity.

As recognition of this dedication, a small group of his closest squash friends organised a graded tournament at his old club in Leicester, as well as an auction of squash collectables and memorabilia under the banner of the ‘World Squash Day Auction’. This included donations of lots by Laura Massaro, Sarah-Jane Perry, Daryl Selby and Nick Matthew.

Donations and payments are still rolling in as I write, with a final estimate of total funds raised being nearly £3,000, 3 times our original target. The generosity of the squash community, including those pro players and squash fans who donated items, and the desire to recognise the dedication of one of their own continues to be inspirational. 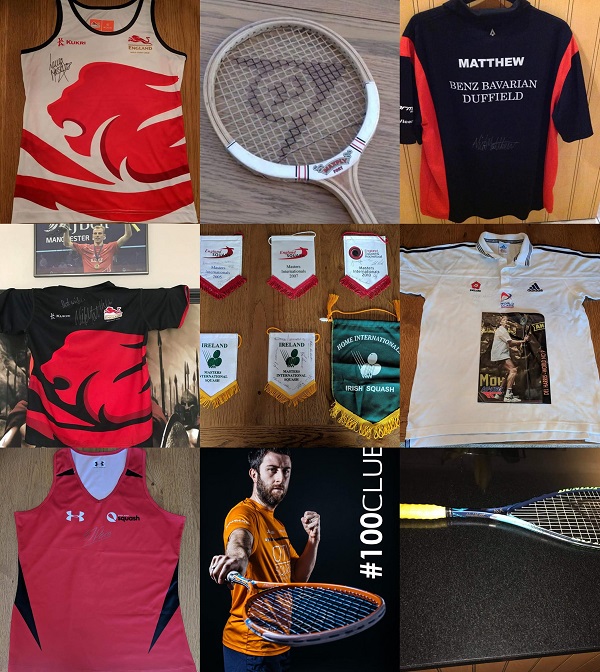 I honestly do not think there is another sport where this kind of initiative would be possible, and in particular the accessibility of the professionals to the fan base. If squash ever gains the recognition it so deserves, I for one hope that this accessibility and spirit of generosity will never change.

So what will World Squash Day have in store for 2019 and how will it further develop? It has been good to see the Professional Squash Association, World Squash Federation and so many national federations and governing bodies put their weight behind World Squash Day this year, as well as in previous years, and hopefully this trend will continue. The number of clubs and squash venues holding events seems to grow each year and this should inspire more and more clubs to get involved in 2019.

The theme this year was ‘thinking outside the box’, encouraging clubs to engage with their local communities beyond the four walls of the club in order to widen the appeal of squash. This represents the main challenge facing squash, and particularly in the UK where once again courts are coming under threat of closure, especially at venues run by fitness chains and in municipal leisure centres. 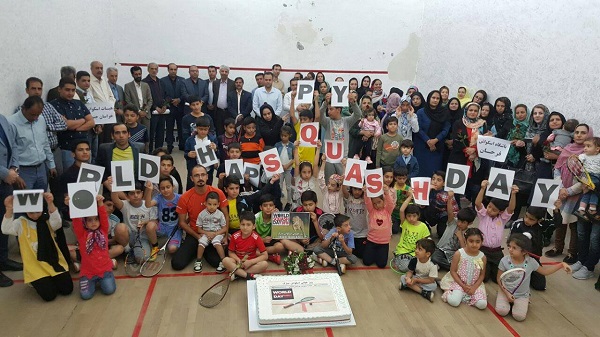 World Squash Day is truly global – this was in Iran this year.

Squash needs to reach out beyond its traditional base to build participation if it is to not only thrive, but also merely survive. The ‘product’ itself is excellent, providing a highly enjoyable workout with many recognised health and social benefits, which once people take up, they are more likely to stick at than a gym membership.

World Squash Day is an excellent opportunity to sell that message, but should be seen merely as an annual focal point to build the profile of the sport. I encourage all clubs and squash venues to get involved in World Squash Day next year as part of their wider efforts to build participation in our great sport.

If anyone is interested in donating to John Batty’s charity, donations can still be made on the fundraising page: https://mydonate.bt.com/fundraisers/johnbattysquash