WORLDS: Birth of a new order in squash?

Alan Thatcher November 2, 2013 No Comments on WORLDS: Birth of a new order in squash? 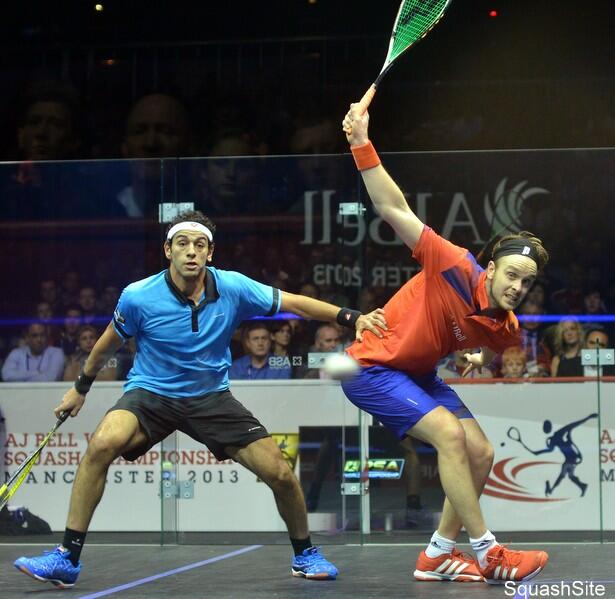 From JOEL DURSTON  in Manchester

In a reprisal of the Egyptian’s shock win against Willstrop in the World Championships in Qatar last year, a five-game thriller in the semi-finals, Elshorbagy won in a tense affair – not least on match-ball.

Willstrop had played a fairly loose shot, high down the middle. Elshorbagy shaped to play the volley, but at the last second stepped back into Willstrop and called the let – evidently deciding for himself that it was a stroke as he shouted and raised his arm in celebration before the ref had given his verdict, let alone allowing Willstrop to decide whether to use his review.

The ref did give a stroke, Willstrop reviewed, but the video ref upheld the decision.

However, even if supporters were obviously not happy with the decision, Willstrop admitted the decision was correct, and was more disappointed with his performance in the fourth.

“I would have expected a stroke, but I had a review so I had to use it. There was a chance one referee might have overturned it so I had to try it,” a sullen Willstrop said.

“That’s what makes me so upset about losing, regretful about the whole thing.

“That means you don’t get to enjoy the great atmosphere in your home town. Instead you go home and think about it all.”

And, referring, not entirely enthusiastically, to his and Vanessa’s imminent arrival, he added: “It’s a nice bit of perspective. Which I hope will sink in soon. It hasn’t at the minute but it’s a World Championship, isn’t it?

“If it means I’m feeling it, then I suppose that’s good because it means I care.”

In tomorrow’s semi-finals, Elshorbagy will meet Gregory Gaultier, after the Frenchman saw off a spirited performance from Daryl Selby, who had game ball in the third, to win 11-7, 11-4, 12-10.

Selby, as usual, had a lot of legs and a lot of fight but, ultimately, did not quite have the same killer instinct and trickery as Gaultier, who had his very own consolation message for Willstrop.

“James is a bit stressed at the moment, so all I wish for him and Vanessa is for the best baby world,” he said.

“This week the baby is going to come and that’s going to be his trophy. Because, being a dad, having my baby is better than being World Champion.”

It’s pretty clear from his play this week, though, that Greg wouldn’t mind both.