Nicol David and Laura Massaro met four times last year; the first of which was at the World Series Finals

Despite some unexpected upsets throughout the women’s 2014 J.P. Morgan Tournament of Champions, it will be a battle of the world’s best as world number one Nicol David and world number two Laura Massaro stormed through their semi-final encounters in New York to set up the final.

Englishwoman Massaro played a calm and focused match against France’s world number eight Camille Serme that resulted in a 11-5, 3-11, 11-6, 11-9 victory, before David battled past fourth seed Alison Waters in 46 minutes to record her third successive straight game victory this week.

“I’m really chuffed,” said Massaro (pictured left). “I’ve lost to Camille the last couple of times we’ve played, so I didn’t really feel any pressure today. But I also knew if I played well that I could win.”

“This time I was a bit more patient, and had just a little bit more respect. You know, you play someone and who you’ve always beaten and then they play a different level than you’re expecting and it takes you by surprise.

So I was just a bit more patient and had a bit more respect, playing as if I’m playing someone who is ranked at the top in the world. I was a little bit more settled on court, worked hard and expected balls to come back,” she said.

Massaro, who previously played at the Grand Central in 2007, suffered back-to-back final defeats towards the back end of last year and will be hoping for third time lucky in her first Tournament of Champions final.

“It’s brilliant. It’s great to play with people walking by all the time and in front of a packed crowd. I’m really looking forward to having one more match on there tomorrow,” the England number one added.

The second women’s semi-final saw a valiant battle from world number four Alison Waters, as she sent David corner-to-corner in an effort to offset the seven-time World champion’s precision.

There was no mistaking where David’s nickname ‘Duracell Bunny’ comes from, as she bounced around the court deflecting Waters’ attempts to provoke an error, and sending back the ball with immaculate and unbelievable shots that left the crowd gasping almost every time.

The straight game scoreline did little to reflect Waters’ hunger for the win, although the 10-all score line in the third game almost took the match to a more even keel, until David gave one final push to secure the match minus the effort of another game, 11-8, 11-8, 12-10.

“I’m just pleased to win that three love. It was neck and neck the whole match, and nobody really understands how close it is until you’re on the court and playing with Alison,” the 30-year-old revealed in her post-match interview.

“She is really a true fighter and such an attacking player, so I was really happy to win that last game as well.”

In addition to Waters’ attacking shots, David was right on the mark herself, throwing a few volley-nicks into the third game that caused ripples of excitement among the sell-out crowd at Grand Central.

“Yeah, I’m really happy that after playing two days on that glass court you get a bit more feel to it, so I got my angles a bit better and it felt really good today,” she said. “I’m moving well, that’s the main thing.”

The final will mark David and Massaro’s 25th WSA Tour meeting since their first in 2005 – and their second in a row on US soil. Massaro is the only player to boast five wins over the Malaysian number one – the most recent famously being in last year’s British Open final in May.

“We have all the tough battles, and I’m sure tomorrow is going to be a good one,” added David. 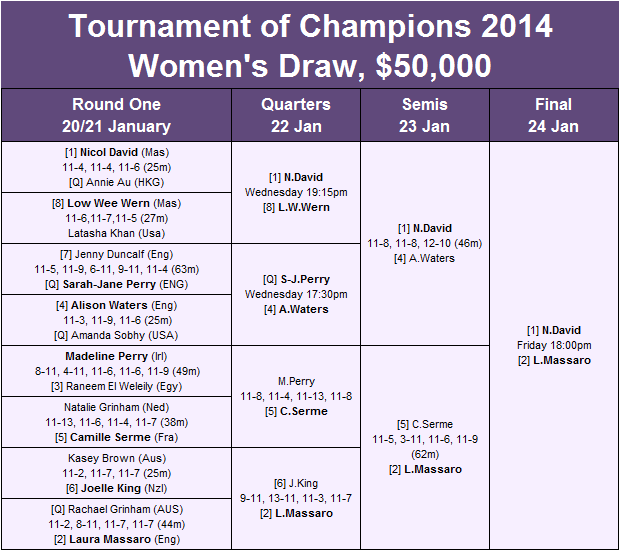