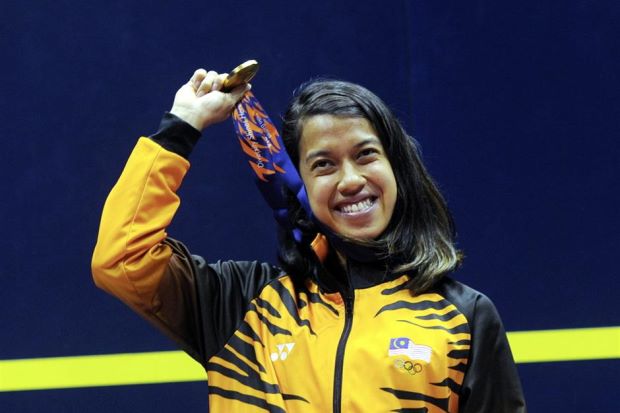 Honesty in squash is a great weapon, and why we must not allow cheats to prosper

Squash is a sport that is frequently played at a ferocious pace, both in terms of the speed applied to the ball and the reaction times required to compete at the highest levels.

Add in the factor of two players both trying their hardest to occupy the same area of the court and you will often see physical contact as the contestants deal with the obstructions that are likely to occur.

Some players are better at clearing the ball than others, but some (hopefully a minority) seem to make a habit of deliberately obstructing their opponent’s path to the ball.

In such a pressure-cooker atmosphere, inside a small box, control is the ultimate, essential factor.

This can have many facets. If you can control your swing (safely) to ensure that the ball goes where you want it to go, and control your footwork in and out of shots, you will go a long way to avoiding any unnecessary contact which may result in stoppages.

The other area of control that is often overlooked is the ability to control your emotions during play.

This might be described in some cases as Anger Management.

None of us wants to lose, and of course it is frustrating when you make mistakes, but anger is neither productive nor attractive.

Some may see anger as a means to gee yourself up when you are in trouble. Usually, in a fast game like squash, it is the surest way to lose the next three or four points before you have calmed down and regained your focus and concentration. 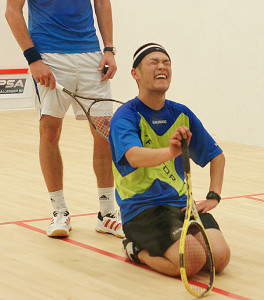 Sometimes decisions go against you …

Sometimes decisions will go against you because of human error on the part of the referees, but some players are always looking to use this stuff as an excuse for losing.

Frankly, I am amazed that some of our leading coaches often fail to instil self-control in the players under their charge. They can turn out hugely talented individuals with superb racket skills and immense fitness levels, but fail in this vitally important area of teaching self-control.

Let’s move this debate forward into a whole new area, and tackle the issue of honesty.

Having been involved in the game for many years, from both inside and outside the court, as a player, coach, journalist, commentator, promoter and administrator, I like to think I have observed these issues from a variety of standpoints.

Let me start with this pronouncement: Honesty in squash will give you balls of steel (with necessary apologies to female players, who may wish to employ their own analogy).

There is nothing more annoying (at any level) than watching players pick up double bounces, or try to play on after hitting the ball out, or serving a fault. Or players hitting shots dangerously close to themselves and arguing the toss when an opponent claims a stroke.

If the ball has bounced twice, this means that the rally is over.

Therefore you should give it up and prepare for the next one.

The same logic applies for any of the scenarios described above.

Let’s boil this argument down to the bare bones: if you try to play on after a double bounce, this is called cheating. Get that? It’s cheating. And cheating is dumb.

You will know, five minutes after that incident, that you have cheated, and so will your opponent, the referee, and any spectators. They may also remember that incident in five hours, five days, five months, and maybe even five years.

Just how much emotional baggage do you want to take on court with you every time you play?

With less than one and a half seconds between shots, and even less time if players volley the ball, you need to be absolutely focused on your next shot, your next step, your next sequence of muscle movements. 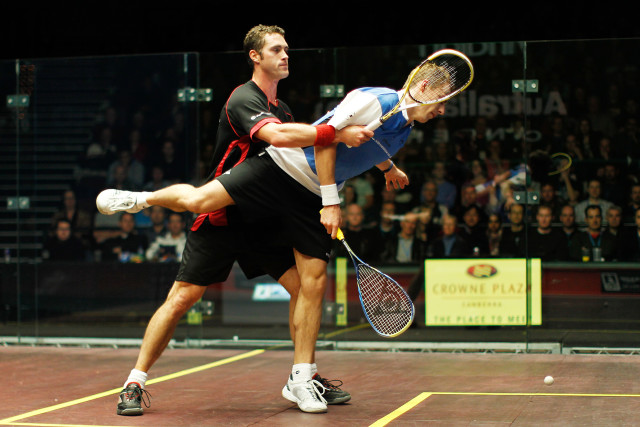 Angry outbursts, or trying to get away with cheating, will usually disrupt that mental flow.

Don’t get me wrong. Squash is a hard, fast, aggressive sport. To play well you must be totally committed and prepared to play through the pain barrier.

But mental discipline is a major factor, and the need for intelligent decision-making transcends all the running and hitting involved in the game. A totally honest approach will help you achieve that psychological state required for elite performance much quicker than the players who fill their heads with negative garbage.

Like I say, honesty will give you mental strength. This involves calling your shots down, walking away from a double bounce,  and applauding your opponents’ shots instead of moaning about your wrongly-perceived bad luck. This will help you (and your opponent) to enjoy the game more and free up your brain to concentrate on your next move, both physical and mental. Cheating is counter-productive, and will slow down your advancement, both as a player, and a mature human being.

Honesty and sportsmanship will also make you a far more attractive proposition to sponsors and spectators.

I recently joined in an online debate about blocking, and was told by a professional player that my remarks about honesty meant that I wasn’t “in the real world”.

Presumably he meant that a lot of players have benefitted from cheating in this fashion, and that it would continue until referees and authorities wised up and put a stop to it.

I could see his point, but from my perspective, in my real world of promoting tournaments and “selling” squash to sponsors, I hope he might take the following issues on board.

When players open court doors to argue with referees, do they ever stop to wonder who is most likely to be in the best seats, directly in front of the match officials, and therefore directly in line with their protests?

Let me tell you. The people who are in the best seats have usually paid a premium price to be there. There is every chance that those seats are occupied by sponsors, who may think twice about investing in a sport that allows cheats to prosper and players to offer foul-mouthed rants at referees.

I know this for a fact, because I can recall dozens of conversations like this down the years, with sponsors who have questioned their investment and with spectators who have been appalled by such behaviour right in front of their faces.

The path to enlightenment, and maturity, may be a long one.

But if you study the best squash players in history, you will realise that they usually rise above such nonsense.

I am including this gallery of pictures to show the total respect that most of the top pros have for each other. One of the most joyous sights in squash is when two top players battle through a tough rally, using all the skills at their disposal  to hit winners, and then producing phenomenal retrieval powers to get the ball back and keep the rally going until its conclusion.

One such moment is captured in the image below taken by Patricia Lyons at the North American Open in Richmond, Virginia. Ramy Ashour and James Willstrop had worked each other to all four corners of the court in a brilliant rally until Willstrop was presented with an opening at the front.

His trusty backhand drop shot clipped the top of the tin. Willstrop was devastated. He was bent double in despair. Ashour, ever the gentleman, came over and tapped him on the shoulder as the applause echoed around the Westwood Club.

Other moments of mutual respect are captured at the end of matches, great battles won and lost that will live in the memory of all who watched. This is the essence of squash. These images are bottling that essence for all time.

Most of our great champions are magnificent role models, with their sportsmanship and work ethic regarded in equal measure to their skills and achievements.

So let’s salute those great players and hold them up as a shining example to all as we march through 2015 with high hopes of squash becoming an Olympic sport.

Let’s make sure that, when squash takes its rightful place in the Games, the sport’s aggressive, exciting, gladiatorial appeal goes hand in hand with sportsmanship and honesty, and can truly uphold the finest of Olympic ideals.